Cody Bellinger is the first player on the list that represents the talent level of what I consider the second tier of Dodgers prospects. Bellinger is a unique first base prospect that has athleticism and bat speed that are hard to find in minor league first basemen, but also has a ways to go to fill out his frame and add the necessary pop for the position. A short-season repeater, Bellinger now looks primed to take on the challenge of Great Lakes and Low-A pitching.

The first thing that stands out about Bellinger on film is his intensity. Bellinger has a noisy set up at the plate, rocking back and forth and waggling the bat. His muscles appear tense and he over-swings at times. Luckily, all the flaws are correctable, and in limited looks at his Ogden time, it appears the Dodgers have worked to quiet him in the box and allow his bat speed to take over. One of Bellinger’s biggest pluses is his bat speed, which you typically won’t find at his position on the farm. As he fills out his slender frame, it’s Bellinger’s bat speed that allows him to project to average or better power.

It’s worth noting a few potential harbingers in Bellinger’s swing that could become major stumbling blocks as he climbs the ladder. Bellinger at time drops his hands too low in his load, and with a high finish, produces an uppercut swing that slices the zone and doesn’t put the bat on the best path for consistent line drive contact. When his hands get low, Bellinger also comes close to collapsing his back side and barring out (locking and extending) his lead arm, making him more susceptible to breaking balls and leads to inconsistent contact. While this all sounds doom and gloom, it’s important to note that Bellinger is still very young and has plenty of time to correct his flaws, and looks like he’s begun to do so in Ogden. Secondly, Bellinger already makes a steady amount of contact for a first baseman, and in 2014, a lot of it was quality.

The rest of the package with Bellinger is mostly positive. He displays natural, soft hands for the infield, and his plus athleticism shows in his footwork and range. Bellinger would be an easy plus first baseman and his value in the field lessens his offensive requirement to be a success at the next level. Should Bellinger be blocked at first, he has a plus arm (though would need to alter his throwing mechanics slightly) that would play in an outfield corner. Bellinger was a perfect 8-for-8 on stolen base attempts last season, and though it may never be a big part of his game, Bellinger has the speed to be a contributor on the base paths and not clog them like a typical first baseman. Bellinger has an untapped frame at a listed 6’4, 180 lbs., and while some might call that a knock for a first baseman, he’s far too young to worry about his present size, especially when the sky’s the limit with that length.

Obviously, it’s way too early to forecast when Bellinger can make an impact at the big league level. He has yet to play a full-season game, and I generally put little stock into numbers at the short season level, especially the Pioneer League. His tools aren’t so loud to suggest he can climb multiple levels in season just yet, and there’s work to be done to iron out his swing to continue producing offensively in the upper levels. Additionally, Bellinger will need a few seasons to add muscle to his frame to hit for the power expected of someone playing first base. 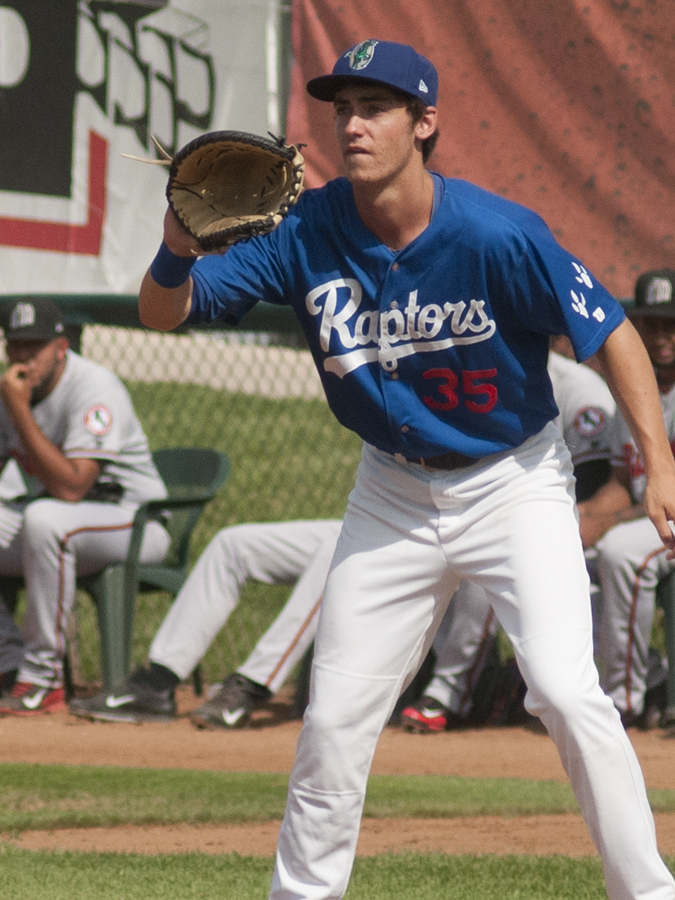 Of the players listed thus far in the countdown, Bellinger has the most potential to make the biggest climb on the list from one year to the next. It’s easy to dream on Bellinger as the rare first first baseman that can produce positive WAR totals in baserunning, offense, and defense. Watching Bellinger video reminds me of Brandon Belt while at Texas; a rail-thin first baseman with a low crouch set-up that San Francisco beefed up and stood up at the plate, developing him into a first-division starter.

Los Angeles can do the same with Bellinger, whose offensive profile may end up looking awfully similar to that of Belt’s. The Dodgers’ system is pretty thin on position prospects at the lower levels and Bellinger will be counted on to provide value to the Dodgers farm system after several hitters likely graduate the farm this season. If he can show mechanical improvements at the plate while upholding his production from 2014, Bellinger should find himself in the top 10 of our next prospect countdown.