The Dodgers have a full 40-man roster heading into the winter meetings next week in San Diego.

Share All sharing options for: Dodgers build depth on edges of 40-man roster

LOS ANGELES -- The Dodgers rebuilt front office has been busy in its first month on the job with a flurry of transactions, seemingly one trade per each new member of baseball operations. None of the moves have been major deals, with relief pitcher Joel Peralta likely the most significant addition to date. But there is a method to the madness, with a perpetual eye toward incremental roster upgrades.

"On both sides of the roster, both position players and pitchers, having depth, having a strong 40-man roster was something Andrew [Friedman, president of baseball operations] prioritized in Tampa and was something I prioritized in Oakland," general manager Farhan Zaidi said on Thursday night. "A lot of the moves we made in the early going here have been about creating that same kind of roster depth here."

Since the free agency period began in earnest, the Dodgers have made six trades and were involved in two waiver claims involving a total of 11 players, and have added three more players to the 40-man roster and have removed two others. One player - Ryan Jackson - rode the transactional roller coaster, claimed by the Dodgers off waivers, then designated for assignment and traded away all in a span of 24 days.

The Dodgers on Tuesday acquired outfielder Chris Heisey from the Cincinnati Reds for pitcher Matt Magill.

On Tuesday the Dodgers acquired Heisey from the Reds for Magill, then tendered the outfielder a contract. He is arbitration eligible after making $1.76 million in 2014. Heisey is just a .247/.299/.422 career hitter and hasn't been even average at the plate since 2011. He also has a reverse platoon split, hitting better against right-handed pitchers than lefties in his career, though he did post an OPS over .800 against southpaws in both 2012 and 2013.

"One of the areas we're trying to improve is center field depth. We certainly have a good number of outfielders, but most of our guys on our roster right now are better off defensively in the corners," Zaidi said. "Chris is a guy who is a good center fielder, a tremendous corner outfielder, a good baserunner, he hits left-handed pitching well. There are a lot of things he brings to the table."

The other Tuesday transaction was avoiding arbitration with infielder Darwin Barney, a former Gold Glove winner at second base who could also see time with the Dodgers at shortstop, where he played 11 innings in 2014 and has played sparingly in the majors. But Barney was drafted as a shortstop, switching to second base in 2010 with Starlin Castro about to become entrenched at shortstop with the Cubs.

"I believe he can play short. That's a lot of the value that he provides for us," Zaidi said. "We feel guys like Darwin and Chris Heisey, who we just brought in, are the type of guys who give our roster the depth and flexibility we hope to have next year."

"For us, part of the attraction is that he's always been a guy with good stuff. Getting him out of the environment in Colorado in particular we thought would help, particularly with the type of pitcher he is," Zaidi said of Nicasio. "The fact that he finished the year in the bullpen and pitched extremely well down the stretch in that role certainly was an additional intriguing factor. It makes us think he has the ability he can go to the bullpen and be a strength for the pitching staff in that role." 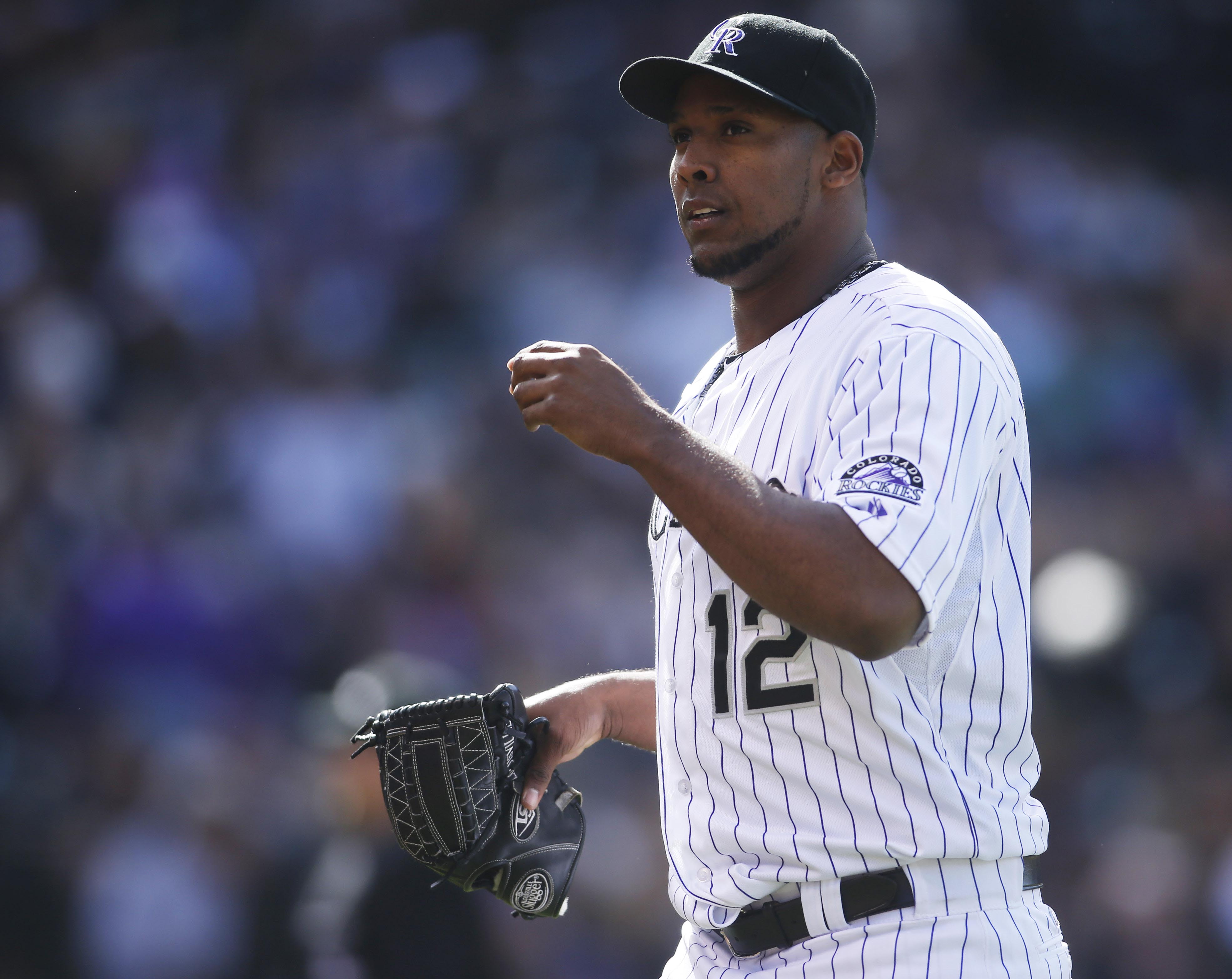 Juan Nicasio could be a key addition to the Dodgers bullpen in 2015 (Photo: Chris Humphreys | USA TODAY Sports)

The Dodgers also tendered catcher A.J. Ellis on Tuesday, though Zaidi was hesitant to name him the starter four months before opening day.

"I don't necessarily view the catching position where you have to declare a de facto starter. You could have a tandem of guys," Zaidi said. "In Oakland we had three guys who kind of rotated through that spot, though it's different when you have DH at-bats at your disposal as well."

Finding someone to share the bulk of playing time with Ellis isn't likely to come via free agency, but could come via trade, the kind of move that would be more substantial than the minor moves to date this winter. But first fortifying the outskirts of the roster was an important first step for Freidman, Zaidi, Josh Byrnes and company.

"Having that base of depth gives you the opportunity to make more aggressive, needle-moving moves as the offseason goes on," Zaidi said. "While we're weighing some of those bigger potential decisions, adding depth is going to be a constant focus for us."

"Having that base of depth gives you the opportunity to make more aggressive, needle-moving moves as the offseason goes on. While we're weighing some of those bigger potential decisions, adding depth is going to be a constant focus for us." -Dodgers GM Farhan Zaidi

One of those aggressive deals will certainly involve moving an outfielder, with the usual caveats. The Dodgers will try to move Andre Ethier ($56 million guaranteed over three years) or Carl Crawford ($62.25 million over three years), likely needing to eat a portion of the salary to get a deal done. Teams will ask for Matt Kemp (due $107 million over five years), but it remains highly unlikely there will be a match between what the Dodgers want for Kemp and what others are willing to pay.

Somehow, some way a deal involving an outfielder will happen, because the Dodgers won't go into 2015 with the distraction of a longtime starter sitting on the bench, something that was palatable over a few months in 2014 but unlikely for a full season.

"It's something we're continuing to explore," Zaidi said. "If you look at the landscape of baseball right now, one of the things that is really scarce is offense right now, and we're fortunate enough to have a surplus of really good offensive outfielders. Obviously there is going to be some demand and some interest in those guys, and we're going to sort through those as they come through."

With the winter meetings coming next week, rumors will fly more fast and furious than ever. The Dodgers will make moves, maybe next week or maybe later in the offseason. But for now, there has been enough roster movement to date to take stock of where we are heading into the winter meetings.

Here is a look at the currently full 40-man roster, at the moment:

^Guerrero can't be sent to the minors without his consent.