Thoughts on the Dodgers reserves, which really depends on the position battle at second base as well as the health of Matt Kemp.

GLENDALE -- The Dodgers are still over a week away from Cactus League games starting, but it's never too early to talk position battles in spring training. There are likely five bench spots up for grabs in camp, with none currently locked down.

"It's pretty open," manager Don Mattingly said on Saturday. "All the guys we're looking at at second, or are looking at as an extra, are kind of all over. Those are the areas that are as up in the air as anything in camp."

This is a departure from most years, when veterans with guaranteed contracts occupied at least a few reserve spots. In 2013 the Dodgers bench was all but set by February, with Nick Punto, Skip Schumaker, Jerry Hairston and Juan Uribe signed; the only real battle was for backup catcher, with Tim Federowicz and a gaggle of non-roster invitees.

In 2014, any talk of the bench begins with second base.

The Dodgers committed $28 million over four years to Cuban defector Alex Guerrero, but the former shortstop is far from a sure thing at second. He's the favorite, but the combination of not playing for over a year, then being limited to 12 games during Winter League play while nursing a hamstring injury, and the difficulty of switching positions could make it tough for Guerrero in camp. 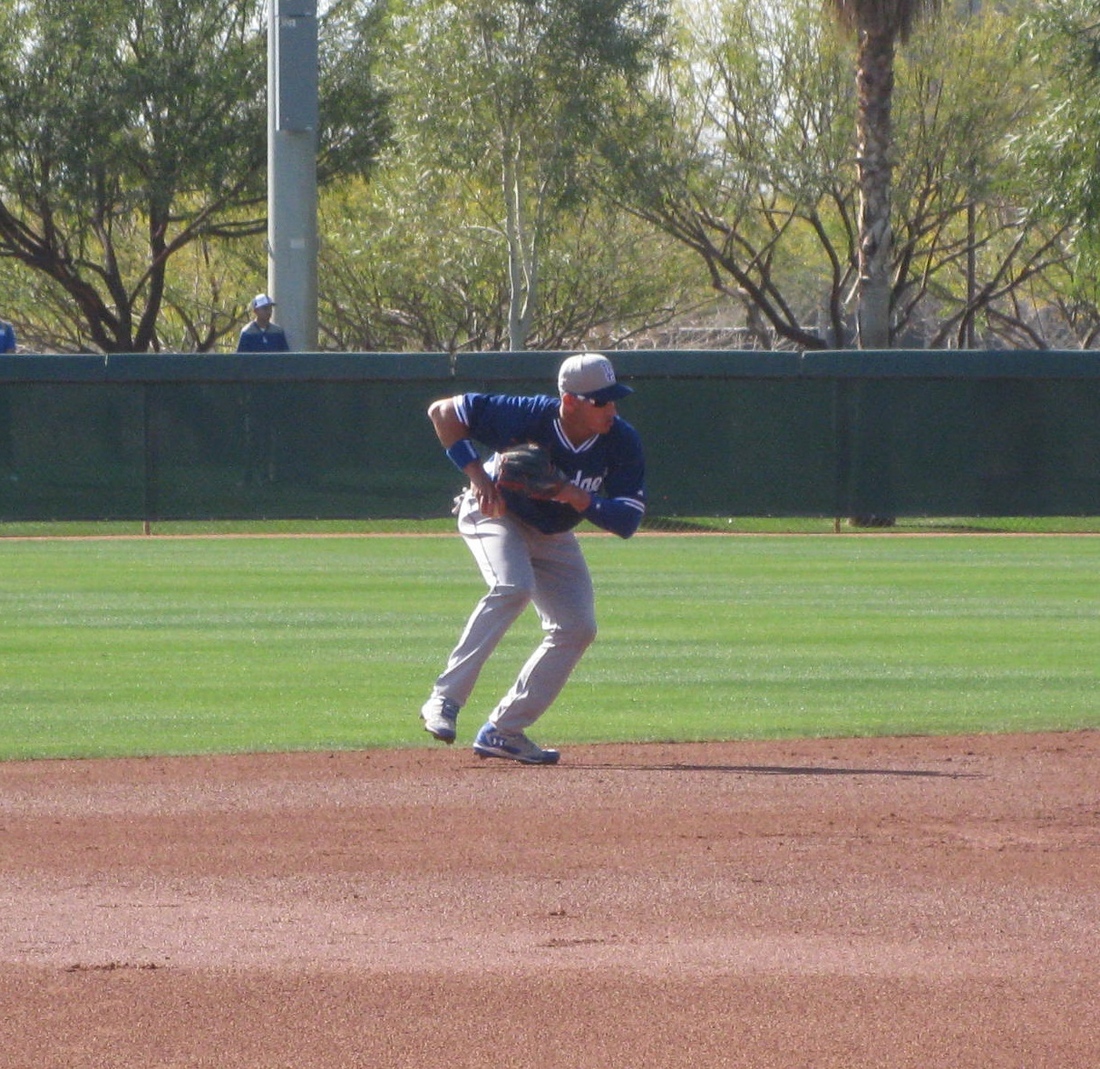 Still, the Dodgers like what they see so far.

"The greatest thing about Alex is that he's got a great attitude about everything. He's a worker, and done everything we have asked," Mattingly said. "Part of this is just time for him to get comfortable, seeing what it looks like in games, getting used to game speed. I'm really happy with his progress, and especially the way he goes about it and how receptive he has been with the change in position."

This season is the only year the Dodgers can option Guerrero to the minors without his consent, so if he doesn't win the starting job at second base the club might want him to take some time to develop on the farm.

Guerrero's chief competitor at second base is Dee Gordon, who began the 2012 season as the Dodgers' starting shortstop. He played 20 games at second base toward the end of 2013 with Triple-A Albuquerque, and worked with Ivan DeJesus Sr. at the position with Indios de Mayaguez in the Puerto Rican Winter League.

"He'll get a good long look at second base," Mattingly said. "Everybody was pretty happy with the way he looked at second base last year."

Gordon also played all over the outfield in the Dominican Winter League - he was busy in the offseason - so if he doesn't win the second base job he has a great chance at making the opening day roster as a utility man. 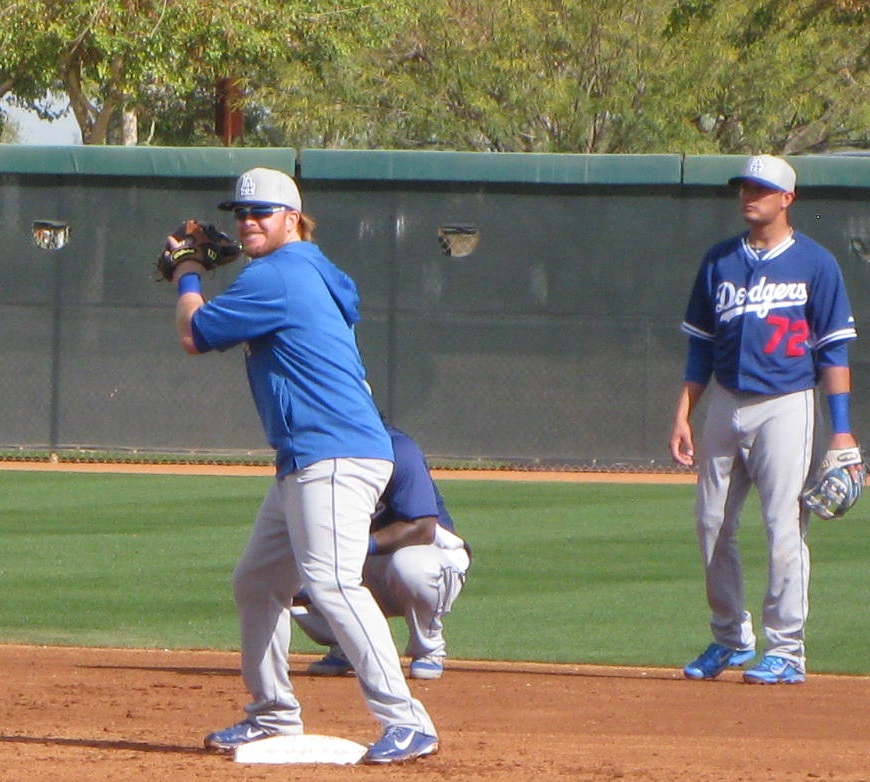 The two main competitors with Gordon for a utility spot both have local ties. Chone Figgins played with the Angels from 2002-2009 and had his best years in Anaheim, while Justin Turner grew up in Long Beach and played at Cal State Fullerton. Both are on minor league contracts with invitations to spring training.

"I'm not sure [what to expect]. I remember watching Figgy play with the Angels, a speed guy , aggressive, smart, being able to play all over, a lot of energy," Mattingly said. "He looks the same. It sounds like his workout was good, and he ran good. We know he knows how to play. It's really just, let's see what it looks like." 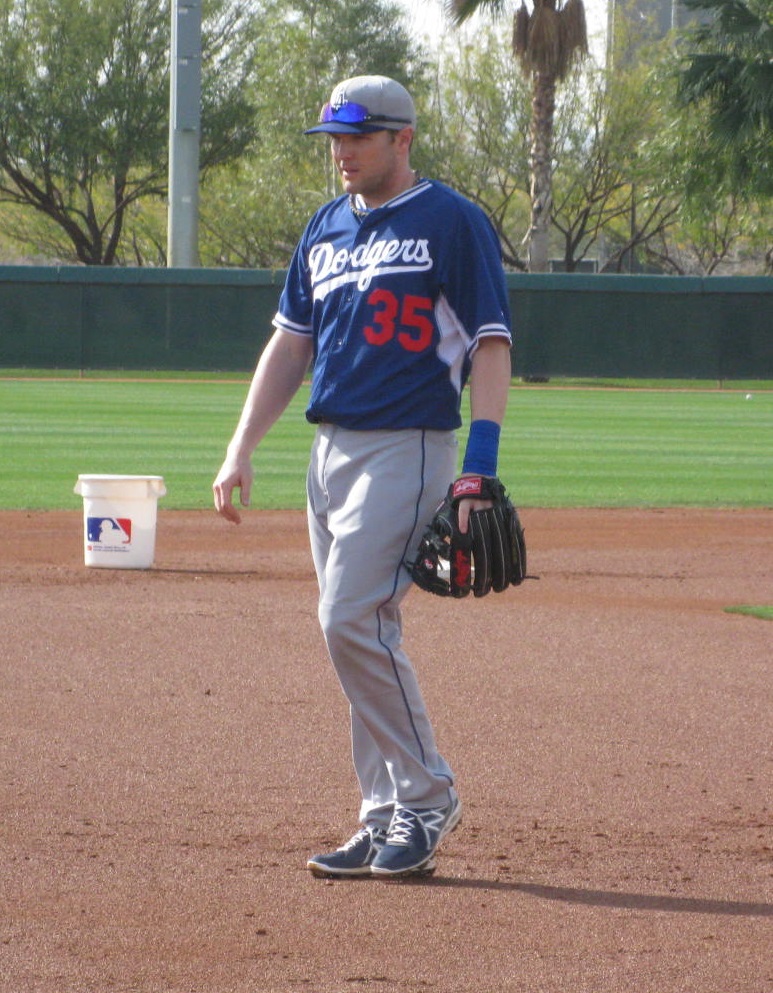 Brendan Harris is in the mix for utility infielder.

Turner, 29, hit .280/.319/.385, a 100 OPS+, in 86 games for the Mets in 2013, but was non-tendered by New York in December. He started games at all four infield positions for the Mets. He has been taking reps at shortstop and second base, and will mix in time at third base and first base as well. Figgins will see time at second base, third base, and probably time at shortstop and center field as well.

"Versatility, with this league, we've found out you can't have enough of it," Mattingly said. "The games change, and it's nice to have a couple of guys who can move around the diamond."

Fellow non-roster invitee Brendan Harris, 33, is also in the mix as utility infielder, but at this point I'd put him a notch behind Gordon, Turner and Figgins. Also under consideration are the defensively-oriented Justin Sellers (on the 40-man) and Miguel Rojas (not on the 40-man). Mattingly refers to that duo as sure things defensively, even dropping an Omar Vizquel comp with the glove on Rojas, but both are subpar offensively, to say the least.

In the outfield, Scott Van Slyke makes the most sense because he can play both corners as well as first base, and is a legitimate power threat of the bench. But some are even higher on his defense than previously thought.

"He looks polished from the standpoint of being comfortable in the outfield. His breaks and his reads are good. He's not a true speed guy, but he makes up for it with reads off the bat and jumps," Mattingly said. "Davey [Lopes, first base coach and outfield instructor] was impressed last year late in the year and said, 'I think Van Slyke can play center.' He gives us another guy who is really versatile back there." 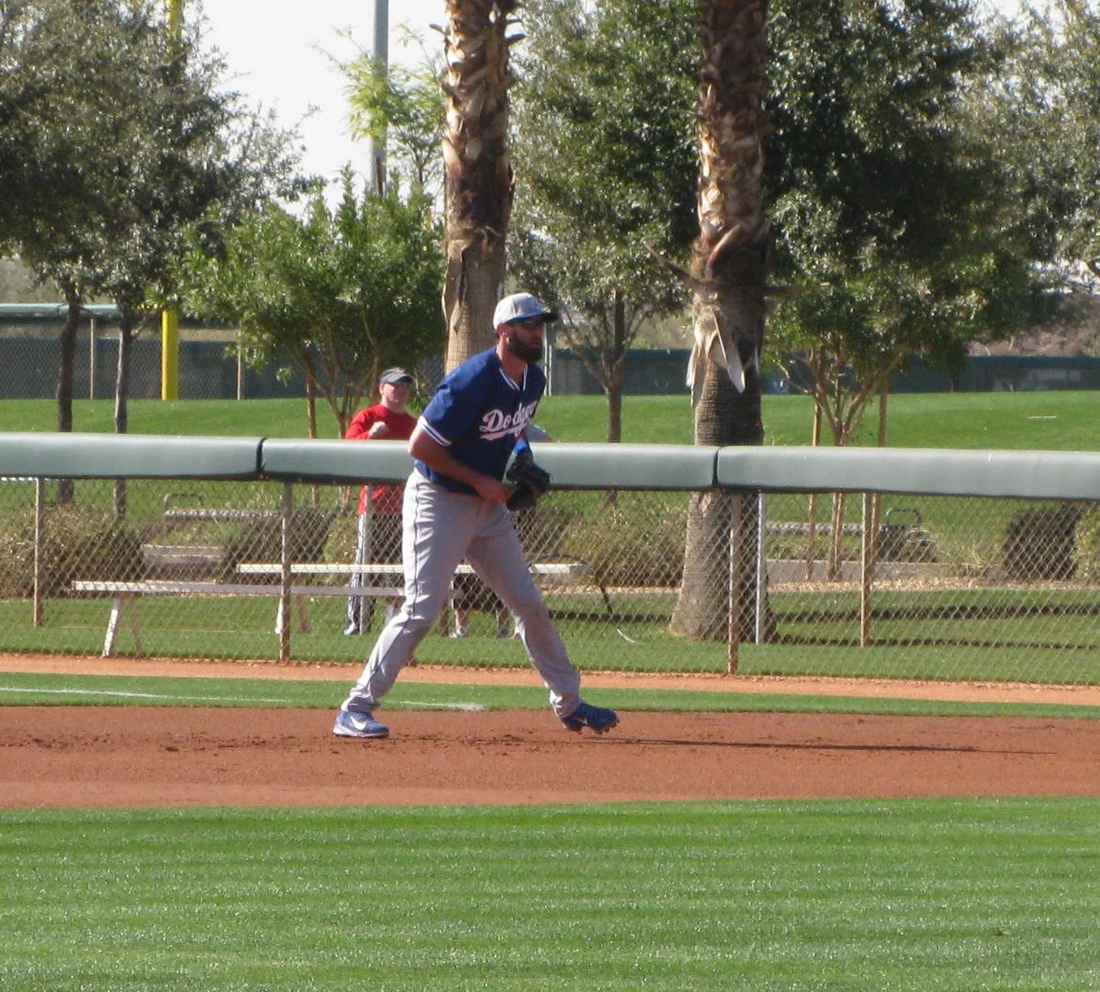 Scott Van Slyke, who hit 19 home runs and 25 doubles in the majors and minors combined in 2013, has an excellent chance at making the opening day roster.

Since Matt Kemp likely won't be ready for the two opening games in Australia and we're not quite sure of his availability for the first week of the domestic regular season, I will assume he opens the season on the disabled list. This opens up a spot for another reserve, but also illustrates an important point.

When rosterbating we tend to spend far too much time on the opening day roster, when it is far more important to realize the active roster is a fluid endeavor with multiple moves throughout the season.

Mike Baxter was claimed off waivers from the Mets in October. The left-hander is essentially in competition with Van Slyke for one of the reserve spots, but with Kemp possibly opening on the shelf there is probably room for both outfielders. Baxter hit just .189/.303/.250 in 74 games for the Mets in 2013, but in his career has excelled off the bench, hitting .313/.417/.463 (21-for-67 with 10 doubles and 11 walks) as a pinch-hitter.

"Over the years I've kind of developed an in-game routine that prepares me," Baxter said. "To come in and have the opportunity to play on this team it's unbelievable. There's a lot of great players here, and I know I can help the team win." 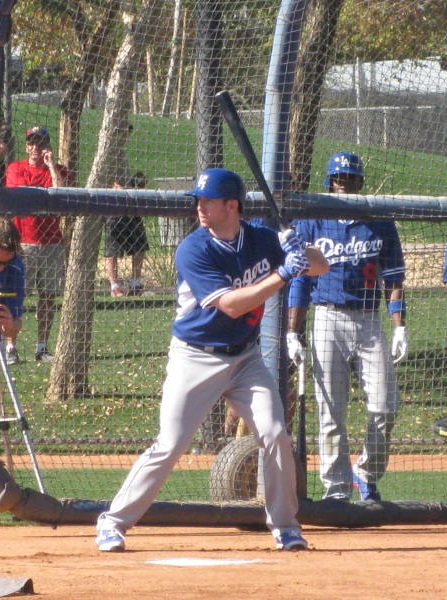 Mike Baxter's trip to Albuquerque could be delayed.

Baxter has one option remaining, so he can be sent to the minors if he doesn't make the team. It's an important thing to consider when thinking about the bench, and could come into play behind the plate.

Tim Federowicz has an option remaining as well, and is battling for the backup catcher spot with veterans Drew Butera and Miguel Olivo.

"I think it's still competitive, but we know what we have and we're comfortable with where we were at last year. Fed has continued to step forward," Mattingly said. "Catching to me is so much intangibles. It's probably the biggest spot on the field that intangibles really come in to play, with a guy that's got leadership, who will study, who will be unselfish as it's a lot harder to hit when having to focus on pitching and calling the game.

"We're happy with Fed's progress, him and A.J. with how they work togetther. That being said, we've got some nice looking guys in camp who are veterans and are fighting to show us what they can do too."

Butera is out of options and would have to be designated for assignment (removed from the 40-man roster) in order to send him down. Butera has over three years of major league service time so he can refuse any outright assignment to the minors, but if Butera were to do so and declare free agency he would forfeit his $700,000 contract. This could be a situation similar to Tony Gwynn Jr., who accepted a minor league assignment in August 2012 with another year and $1.15 million remaining on his contract.

The backup catching spot could really come down to convincing one of Butera or Olivo to stay in Triple-A as insurance, but if not Federowicz could find himself on his way back to Albuquerque, at least for a little while.

A lot can change in 33 days, but my guess right now for the opening day Dodgers roster includes Kemp on the disabled list, Guerrero starting at second base, and a bench consisting of Gordon, Van Slyke, Turner, Baxter and Federowicz.