From Kershaw to Kemp to Puig to the Diamondbacks, the Dodgers legendary left-hander opened up on Monday, his first full day in camp.

GLENDALE -- Dodgers legend Sandy Koufax is back in camp, reprising his role this year as a special adviser to team chairman Mark Walter. Koufax arrived on Sunday afternoon, but made his first trek to watch the Dodgers practice on Monday.

Koufax wasn't in uniform on Monday — he was at various times in 2013, his return to the organization — wearing a Dodgers pullover and cargo shorts. His presence though was unmistakable, turning the heads of players and fans alike as he made his way onto the practice fields. 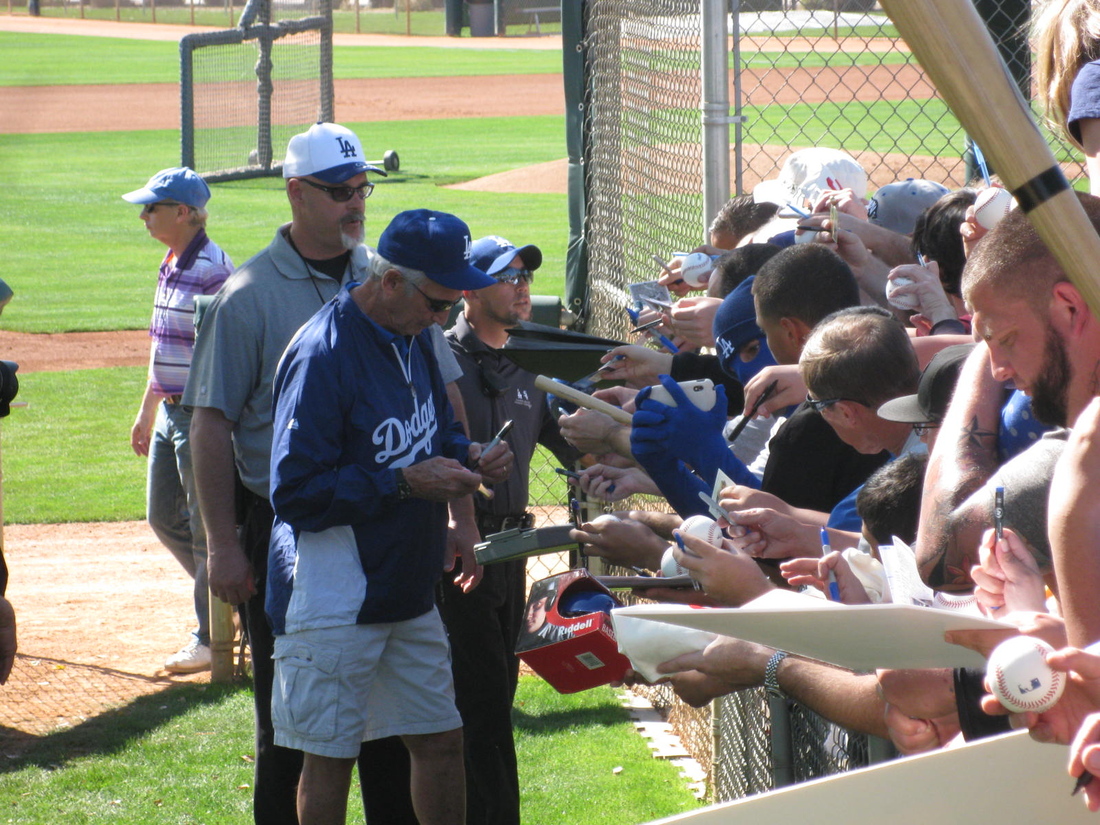 The crush of fans got so intense that security guards had to step in on one occasion to move autograph seekers back, to create room.

Koufax doesn't have a defined role, but will offer advice when asked, either to pitching coaches Rick Honeycutt and Ken Howell, or players. Koufax shared a nice moment between fields with Matt Kemp, offering a bit of advice (I wasn't close enough to hear, but I'd imagine the language being spoken could only be deciphered by those who have flown so high, enough to make Icaros jealous). 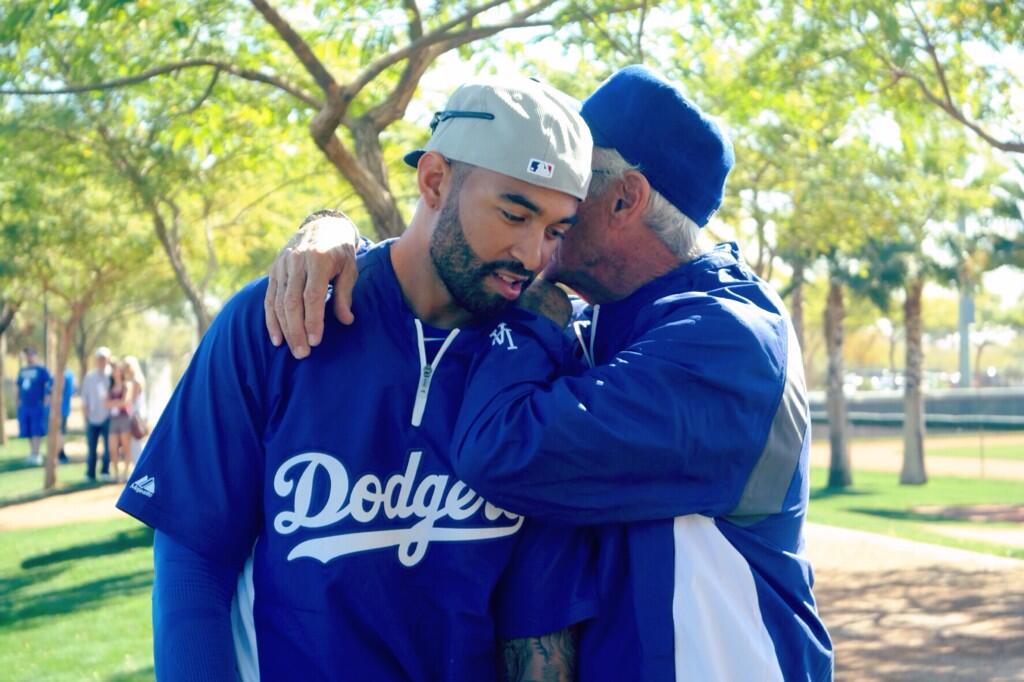 When asked what he thought of the Dodgers four-outfielder situation and Kemp's comments that he wasn't a fourth outfielder, Koufax deferred to manager Don Mattingly but did say it wasn't a big deal at all.

"The best three people will play every day," Koufax said.

Koufax presented Clayton Kershaw his second Cy Young Award at the BBWAA awards dinner in January, and said he wasn't bothered in the least when many compare Kershaw to him.

Kershaw has two Cy Young Awards and turns 26 in March. Koufax won the first of his three awards at age 27, in 1963. Koufax was asked what Kershaw had to do to sustain his success.

"At 25 you don't have to adjust. Talk to me when he's 35. He just has to keep doing what he's doing, and every year he has gotten better," he said. "If he keeps getting better the sky's the limit, and if he doesn't get any better the sky's still the limit. He's a great pitcher, he's special." 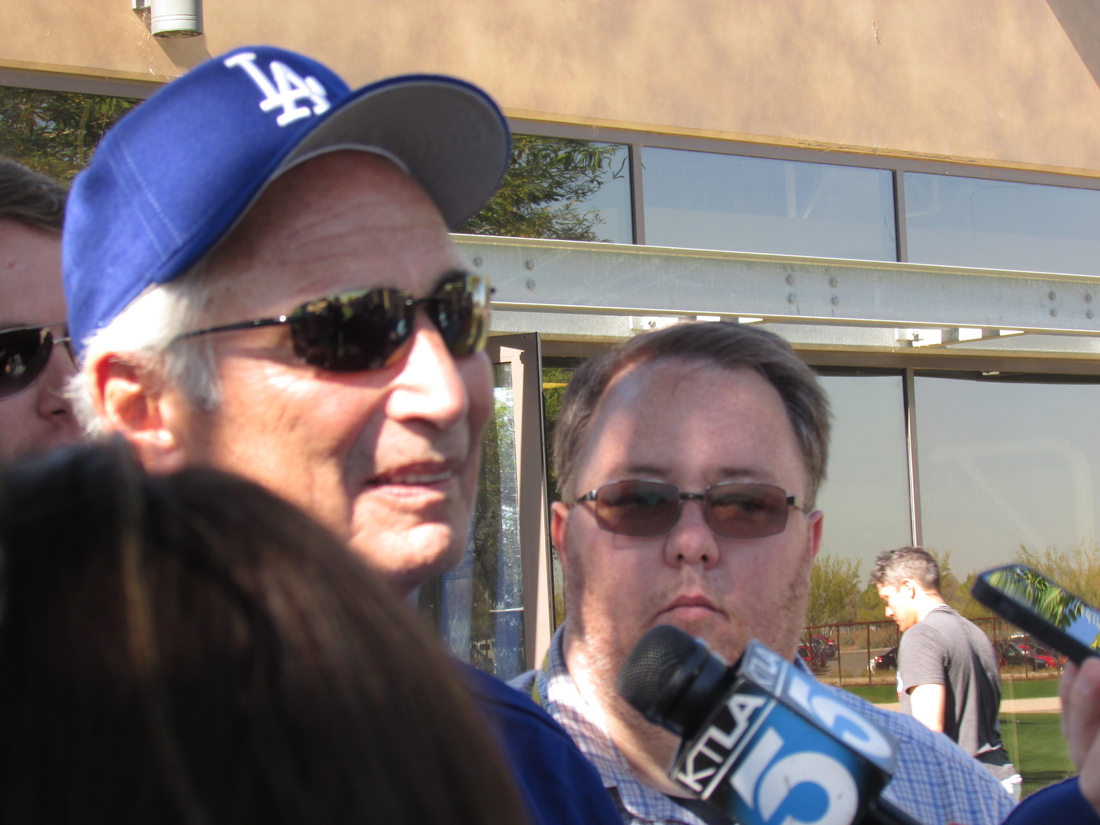 Sometimes you're in the right place at the right time.

Koufax had trouble coming up with a comparable player from his era for Yasiel Puig.

"He's so physically talented. Everyone makes a comparison to Bo Jackson, who played football and baseball," Koufax said. "These guys are so big, so strong and so fast, which is a combination you don't always see."

Koufax was asked if Puig's arm reminded him of Roberto Clemente. He acknowledged they were similar, but stressed he didn't want to compare someone to Clemente after 2-3 months in the big leagues. Koufax didn't have much of a problem with Puig's flair, to a point.

"If the showmanship doesn't involve bad decisions, it's fine. I think people love it," Koufax said. "You've got a great arm, you'd like to show it off, but you'd like to see it go to the right place all the time.

"He's young. The biggest thing is he hasn't played against competition as good as he is. He's always been able to have his physical ability make up for whatever else you do. He's learning, I'm sure [improvement is] going to happen. There's too much talent not to."

Koufax was also asked about the rivalry between the Dodgers and Diamondbacks, which in 2013 included a brawl and one pool party that ruffled several Phoenician feathers.

"It's kind of silly, but it happens when you're in the same division. When you play each other so many times in the spring and so many times during the season, you get mad at each other," Koufax said. "Do you all have wives and husbands? Do you all get along?"

Koufax was sure the Dodgers and Diamondbacks wouldn't have any sort of incident in Australia. 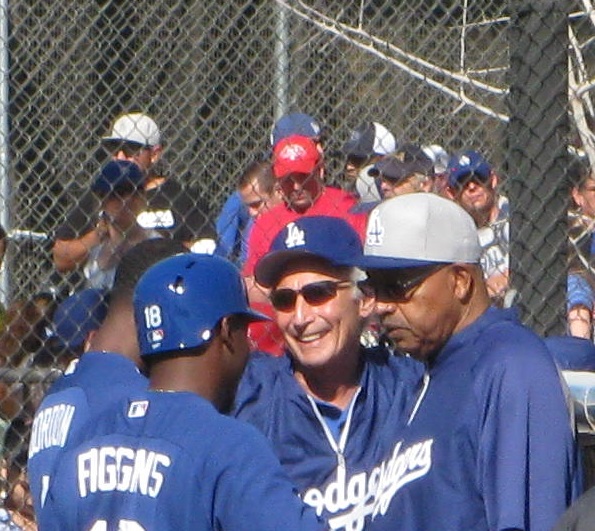 "After that long on an airplane, you don't have a temper left," he quipped.

There is just an aura around Koufax, so much so that the presence of Orel Hershiser and Tommy Davis in Dodgers camp was under the radar. It is even prevalent while interviewing him.

Koufax only made one opening day start during his career, which seems absurd but was more coincidental than anything.

"It just happened that way. It's kind of called an honor, but a lot depends on what happens in spring training," Koufax then added. "If you have three or four good pitchers, it might depend who you are playing."

Koufax then asked, "How did I do that opening day?"

The question somehow got passed like a hot potato to me, but I froze. I didn't know the answer, but I guessed, "You probably won."

"A 4-0 shutout of the Cardinals," Koufax said, laughing as he walked off.

He was right, of course. In 1964. But it's hard to blame St. Louis. They were probably just as mesmerized by Koufax as everyone else.