Hyun-jin Ryu prepares for down under, Andre Ethier goes up over

The Dodgers have four ties in 14 games this spring.

Share All sharing options for: Hyun-jin Ryu prepares for down under, Andre Ethier goes up over

GLENDALE -- Hyun-jin Ryu continued his solid spring training with five strong innings on Monday in his second-to-last start of the Cactus League in the Dodgers' 8-8 tie with the Athletics at Camelback Ranch.

One day after manager Don Mattingly announced Ryu would start the second game of the season for the Dodgers in Australia — Ryu said of the assignment, "I'll do my best to be prepared for the series and perform to the highest expectations." — Ryu allowed just one run on three hits and a walk in his five innings, with four strikeouts.

"I'm satisfied with the command of my pitches, the fastball, curve, changeup," Ryu said. "Everything was down in the zone."

In three Cactus League starts this spring, Ryu has allowed three runs in 11 innings, with three walks and seven strikeouts.

"Hyun-jin was good again. We're just moving forward toward Australia," Mattingly said. "He's been throwing the ball good for us all spring."

He threw 69 pitches on Monday, and hopes to throw about 85 in his final spring start on Sunday against the Rockies.

"What I wanted to accomplish [this spring] mostly is pitch count, and to continue to build up the arm strength so I can get my pitch count up so I can pitch in the regular season accordingly." 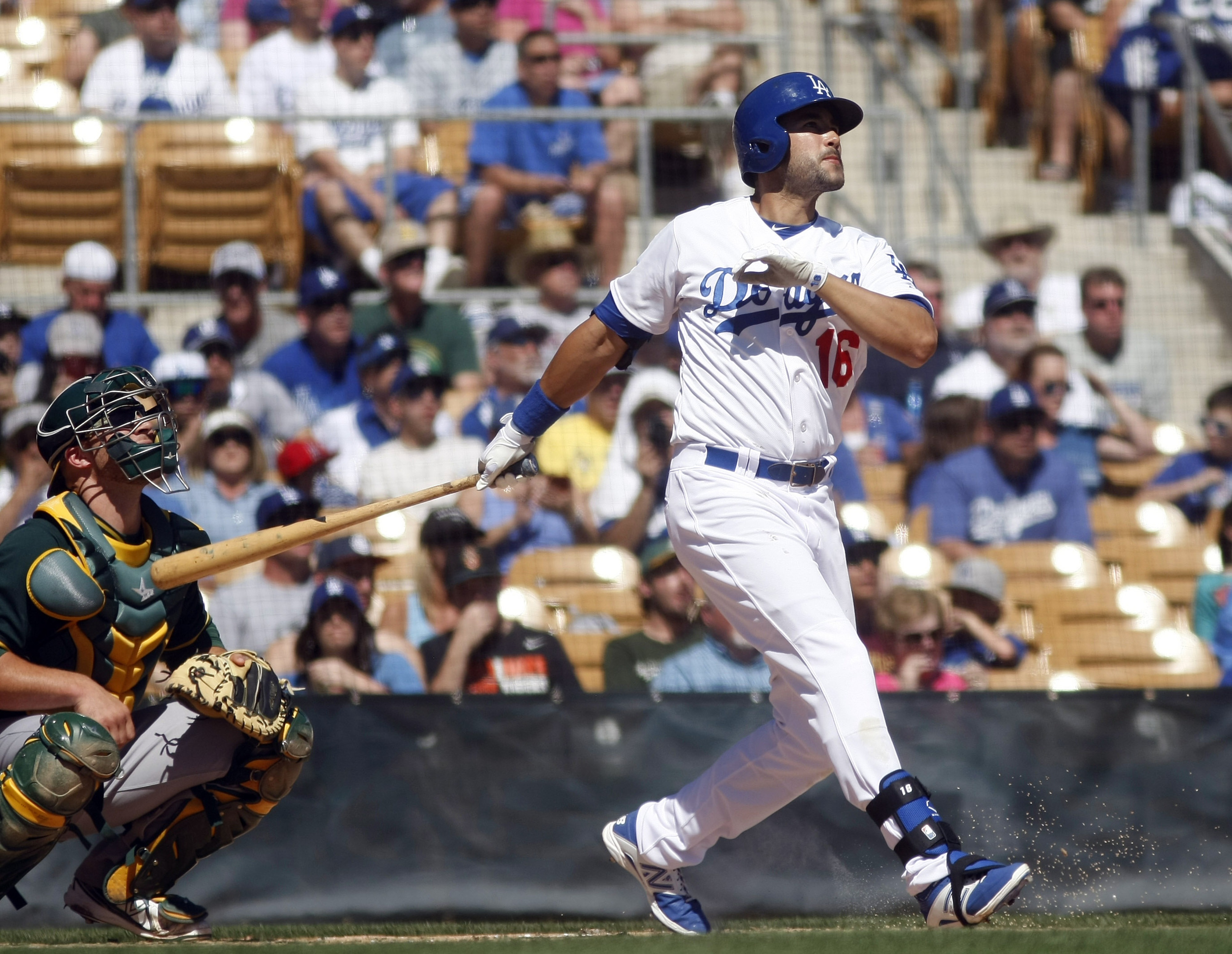 Andre Ethier hit a three-run home run well over the right field fence in the first inning. It was the first extra-base hit of the Cactus League for Ethier, who said his approach at the plate will change a bit with just a week of exhibition games remaining.

"I didn't want to get too far ahead, trying to hit balls too far or too hard right away. I want to stay up the middle early on, then once I'm good at squaring those balls up consistently I can start adding on," Ethier said. "This is the week you can start adding on a little bit, taking calculated swings at times, then at other times staying back and taking base hits whenever you need them."

This spring training so far has seen catcher J.C. Boscan pinch run for Carl Crawford and now this...

Miguel Olivo came through with a pinch-hit, bases-loaded double to widen the Dodgers' lead to 7-3 in the seventh inning, but what he did next was more notable. With Luke Gregerson on the mound and nobody really paying attention, Olivo dashed for third base for an easy stolen base.

In a game featuring the top two stolen basemen of the spring in Dee Gordon (eight steals) and Billy Burns (seven steals), the 35-year-old catcher had the game's only steal.

Olivo has 53 stolen bases in his 12-year major league career, including 6-for-9 when attempting to steal third base.

The Dodgers head north to Surprise on Tuesday to battle the Royals, one of just two road trips remaining in the Cactus League for Los Angeles. Dan Haren gets the start for the Dodgers, putting him in line to pitch somewhere again on Sunday before he heads