Noel Cuevas & the life of a minor leaguer in spring training

The outfielder had his moment in the sun in his only major league at-bat so far this spring.

Share All sharing options for: Noel Cuevas & the life of a minor leaguer in spring training

SURPRISE -- The Dodgers got production from an unlikely source on Tuesday as minor league outfielder Noel Cuevas clubbed a three-run home run to give the Dodgers a comeback 7-5 win over the Royals at Surprise Stadium.

Down 5-4 in the ninth, Alex Guerrero led off the innings with a shot that nearly tied the game. But instead of leaving the park for a home run, the ball ricocheted off the top of the center field wall and Guerrero settled for a triple. The play was reviewed by umpires, but the non-home run call was upheld.

Three batters later, Cuevas batted for the first time all spring. Wearing number 92 on Tuesday, it was his third time suiting up with the Dodgers from the minor league side this year. He launched a ball over the wall in left center field to give the Dodgers a 7-5 lead.

He played in one game in each of the last two spring trainings for the Dodgers, but was 0-for-1 in both the 2012 and 2013 Cactus League. 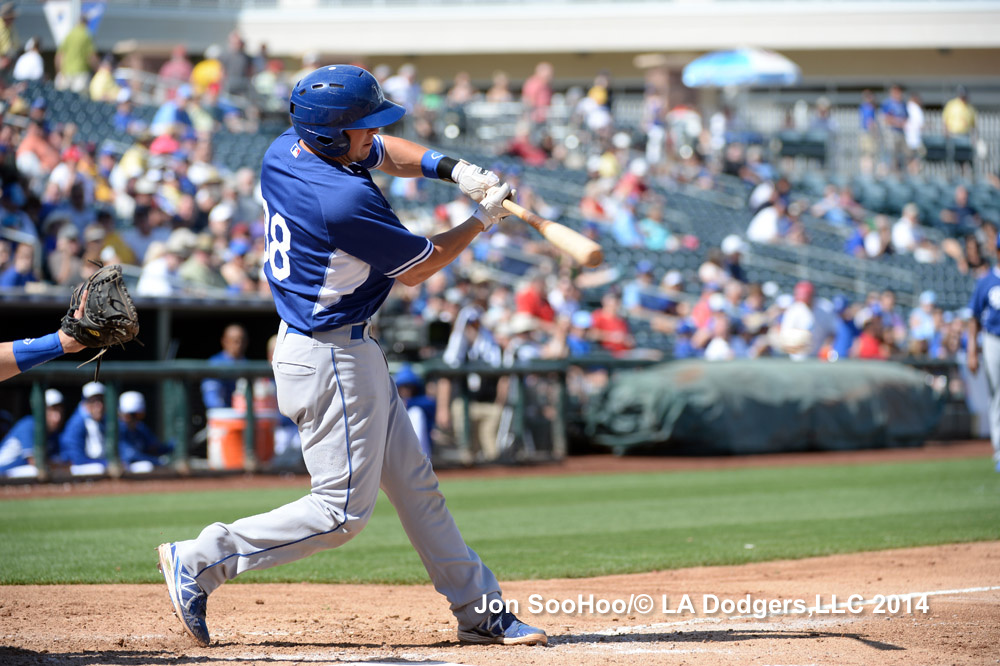 On Tuesday the Dodgers suited up nine players from the minor league side, on the high side for most games but a common occurrence during spring training, especially for road games. Four saw action in the game. There have been 33 different players from minor league camp suit up in a game for the Dodgers this spring - yes, I have been keeping track - led by infielder Darnell Sweeney, who has joined the Dodgers in 10 of their 15 games.

They wear high numbers, usually in the 80s and 90s, without names, and not the same one every day. Jeremy Hazelbaker, an outfielder acquired from Boston for Alex Castellanos in October, has worn five different numbers - every one from 89 to 93 - in his eight games in uniform with the major league team, a sort of forced obscurity.

Don Mattingly after the game was happy for Cuevas but the manager's description was also a reminder of the pecking order and just how hard it is to get to the major leagues.

"It's nice when the kids come over, because they get to swing and you know they're aggressive," Mattingly said. "We don't know a whole lot about him honestly. We get different ones all the time, but it's just nice when the kids are in there."

Such is the life for a minor leaguer. But every once in a while, you get a chance to be noticed. Just like Cuevas.