The $25 million infielder from Cuba, finally cleared to work in the U.S., reported to Dodgers camp on Thursday, 19 days after he signed with the team.

GLENDALE -- Dodgers camp was abuzz on Thursday morning, and not just because the trip to Australia is a mere three days away. The team's newest addition, Cuban defector Erisbel Arruebarrena, has arrived at Camelback Ranch.

The infielder, signed to a five-year, $25 million contract on Feb. 22, said he got his work visa and arrived in the United States a few days ago, and flew from Miami to Phoenix on Wednesday night.

With only three days left on the Dodgers' Cactus League schedule after Thursday, it seems unreasonable to expect Arruebarrena to play in any games, though games on the minor league schedule, played every day starting Saturday through March 29, are likely on the docket. He said he last played competitively in December. 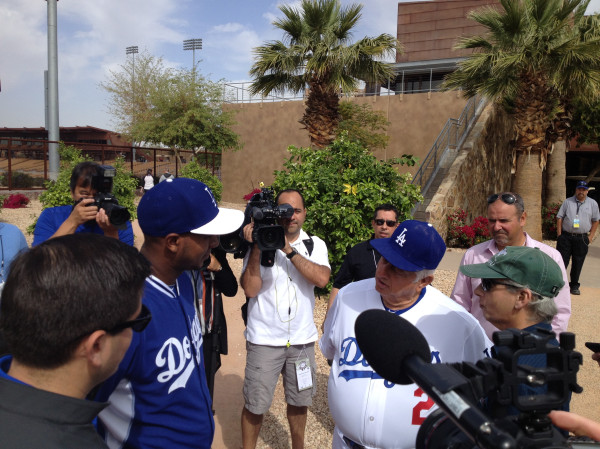 Former Dodgers manager Tommy Lasorda greeted and spoke to Arruebarrena in Spanish, and told the infielder his name was "muy dificil" (very difficult) to pronounce.

Despite the layoff, Arruebarrena said he is nearly in game shape.

"I feel ready now, but wants to get live pitching to get used to my timing," he said. "Once I have that down, I feel I'll be ready."

Arruebarena isn't sure where he will begin the season, though he did say he expects to make the big leagues at some point in 2014. A natural shortstop, he will likely play multiple positions this season to give the Dodgers some flexibility.

"[I'll play] second base or shortstop, wherever they need me," Arruebarrena said. "I feel very excited, not nervous at all. I'm excited to start practicing and getting ready to play some baseball."

Arruebarrena played with Yasiel Puig in Cuba on Cienfuegos and played with Alex Guerrero on the national team. He said he didn't talk to either of them about joining the Dodgers prior to signing. Arruebarrena grew up with Puig, and they embraced on the back fields on Thursday at Camelback Ranch.

"It has been years since I saw him. I was emotional in seeing him for the first time," Arruebarrena said.

Arruebarrena confirmed there was just one u in his last name, despite wearing jerseys with "Arruebarruena" during the 2013 World Baseball Classic.

"That's not how I wanted it to go, but at a certain point they sent out the rosters and that's what it was, so I left it that way," he said, smiling. 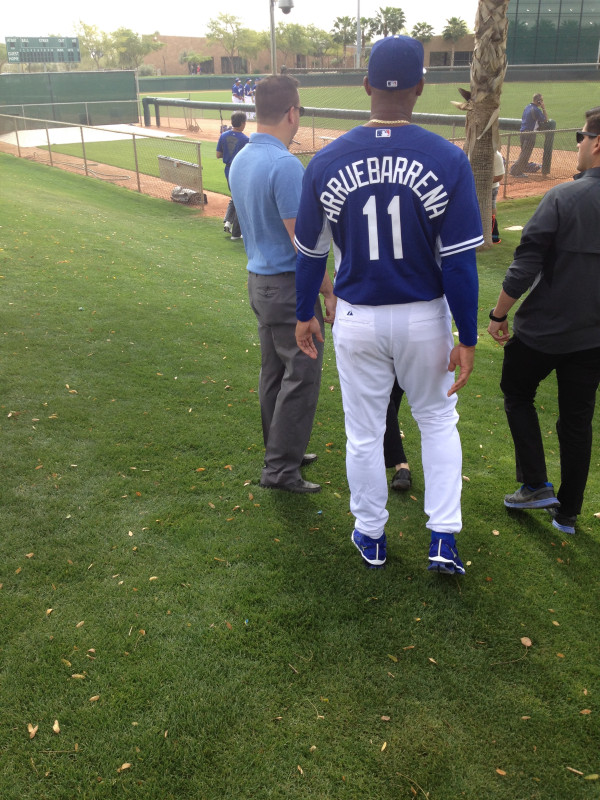 The last Dodger to wear No. 11 in a major league game other than Manny Mota (not counting assistant hitting coach John Valentin, who briefly wore No. 11 this spring before switching to No. 12 after the departure of Justin Sellers) was Bart Shirley in 1968. Arruebarrena said he knew of Mota and it was explained to him his history with the Dodgers.

"It's an honor and quite a privilege to wear the same number as Manny Mota," Arruebarrena said.

Mota greeted Arruebarrena and told him to wear No. 11 with pride. 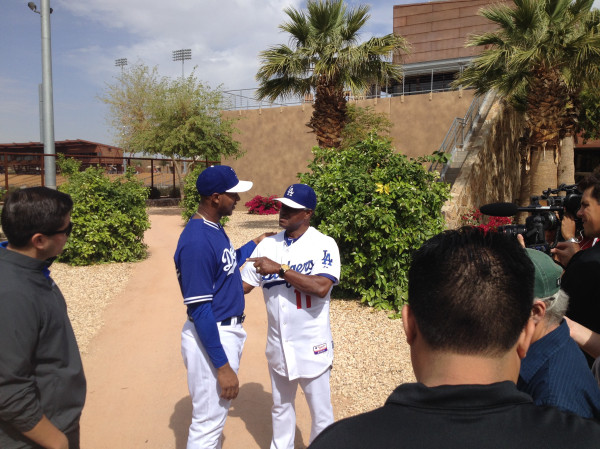