GLENDALE -- The Dodgers on Sunday finalized their travel roster of 30 players to Sydney, but first made a couple of roster moves. Chone Figgins, who was out of baseball in 2013, made the Dodgers as a non-roster invitee. His contract was purchased, adding him to the 40-man roster. To make room, the Dodgers designated pitcher Javy Guerra for assignment.

"We feel like his at-bats have been okay. He hasn't had that many hits but has walked quite a bit. His at-bats have been the kind of at-bats we like. He's shown that he can play everywhere on the field. There's definitely a value there with Figgy," said manager Don Mattingly. "We still feel like the body is live. He's been running good, with no issues."

Guerra was drafted by the Dodgers in the fourth round in 2004 and saved 21 games as a rookie in 2011, but was demoted as closer in an injury-plagued 2012 campaign and spent most of 2013 in Triple-A Albuquerque. He put up a 6.75 ERA in nine games for the Dodgers last season with 12 strikeouts in 10⅔ innings. 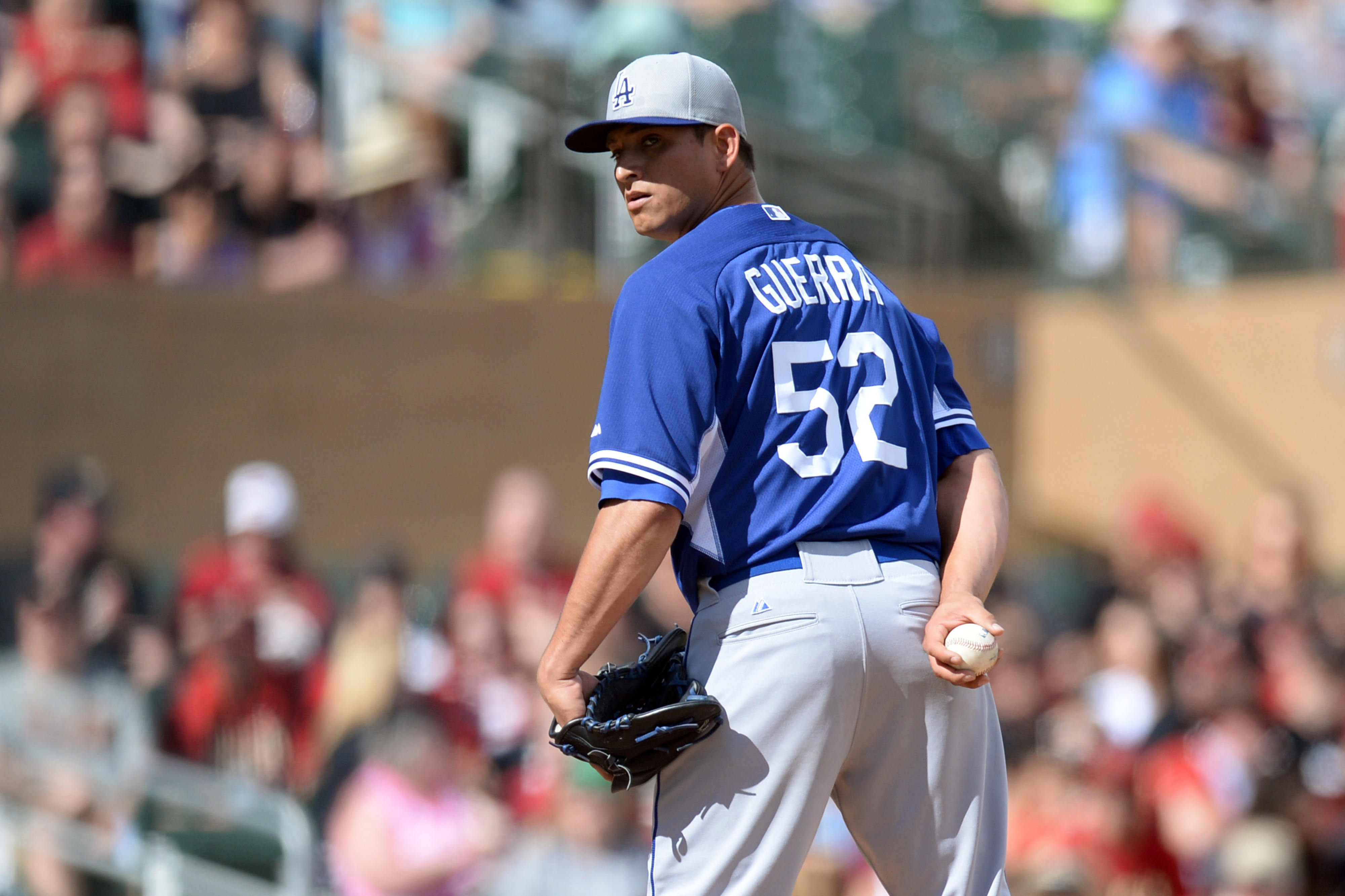 Javy Guerra's immediate future will be decided within the next 10 days.

Perhaps most importantly, Guerra was out of options.

"It just came down to the numbers in spots. He's kind of been back and forth the last couple of years. Obviously Javy's a guy that I like. His stuff, I always feel like it plays. I think he's a big league pitcher," Mattingly said. "Javy being out of options and getting designated, I feel it speaks to our depth, with Chris Withrow, Dominguez and some guys we ended up keeping instead. We just felt like we had other options."

Guerra is now off the 40-man roster and the Dodgers have 10 days to figure out what to do with him. They can try to trade him, but if that doesn't pan out they must place him on outright waivers at some point within the next eight days. If Guerra were to clear waivers, the Dodgers could outright him to the minors, though it seems unlikely that he would pass through unclaimed.

Guerra put up a 2.25 ERA in seven Cactus League games, with five strikeouts and four walks in eight innings. On Saturday he already knew his fate, though he didn't reveal it yet.

"I already know the outcome. It is what it is," Guerra said. "I feel healthy. I came out of camp good, and we'll just keep moving forward."

Here are the 30 players boarding the plane with the Dodgers to Australia:

Patterson was reassigned to minor league camp on March 11. Either he or Lee will start the exhibition game against Team Australia on Thursday, but it's likely both will pitch in that game.

Carl Crawford will not make the trip, and will miss the opening series in Australia on paternity leave.

Staying back in camp are Zack Greinke, Dan Haren, Brandon League, Matt Kemp, Josh Beckett, Chad Billingsley and Ross Stripling. The first three are likely the three exempt players on the 28-man active roster that must be submitted by Friday night at 7 p.m. PT, while Kemp, Billingsley and Beckett are likely headed for the disabled list. Stripling is out for the year and will have Tommy John surgery soon, but the non-roster invitee will eventually be reassigned to the minor league side, though it's really only a procedural move more than anything.

I correctly predicted 29 of the 30 players on the plane, only missing Guerrero (I had Nick Buss instead).