The team has scored six runs in four consecutive games, matching their high from 2013 set twice in July. The last time the Dodgers had a longer such streak was a six-game run from May 17-22, 2012.

Even with two off days the Dodgers managed to have an eventful week, splitting a pair of 10-inning games in a potential World Series preview at home against the Tigers, then sweeping the Diamondbacks over the weekend in Arizona.

The resulting four wins in five games gave the Dodgers a 7-1 road record, their best start away from home since 1983.

Dodger Batter of the Week: The cleanup man cleaned up in every game of the week for the Dodgers, as Adrian Gonzalez hit four of the team's seven home runs for the week and drove in 11 runs. In addition to ending the week on a nine-game hitting streak, Gonzalez is one game away from trying franchise records for consecutive games with an extra-base hit (he has eight) and consecutive games with a home run (four).

Dodger Pitcher of the Week: With a full six days rest after his home opener loss, Hyun-jin Ryu was magnificent on Friday in Arizona, striking out eight in his seven scoreless innings while allowing just two hits and a walk. Ryu on the road this season has allowed no runs in 19 innings.

Honorable mention goes to Zack Greinke, who allowed one run while pitching into the sixth on Saturday and has 17 strikeouts since his last walk. 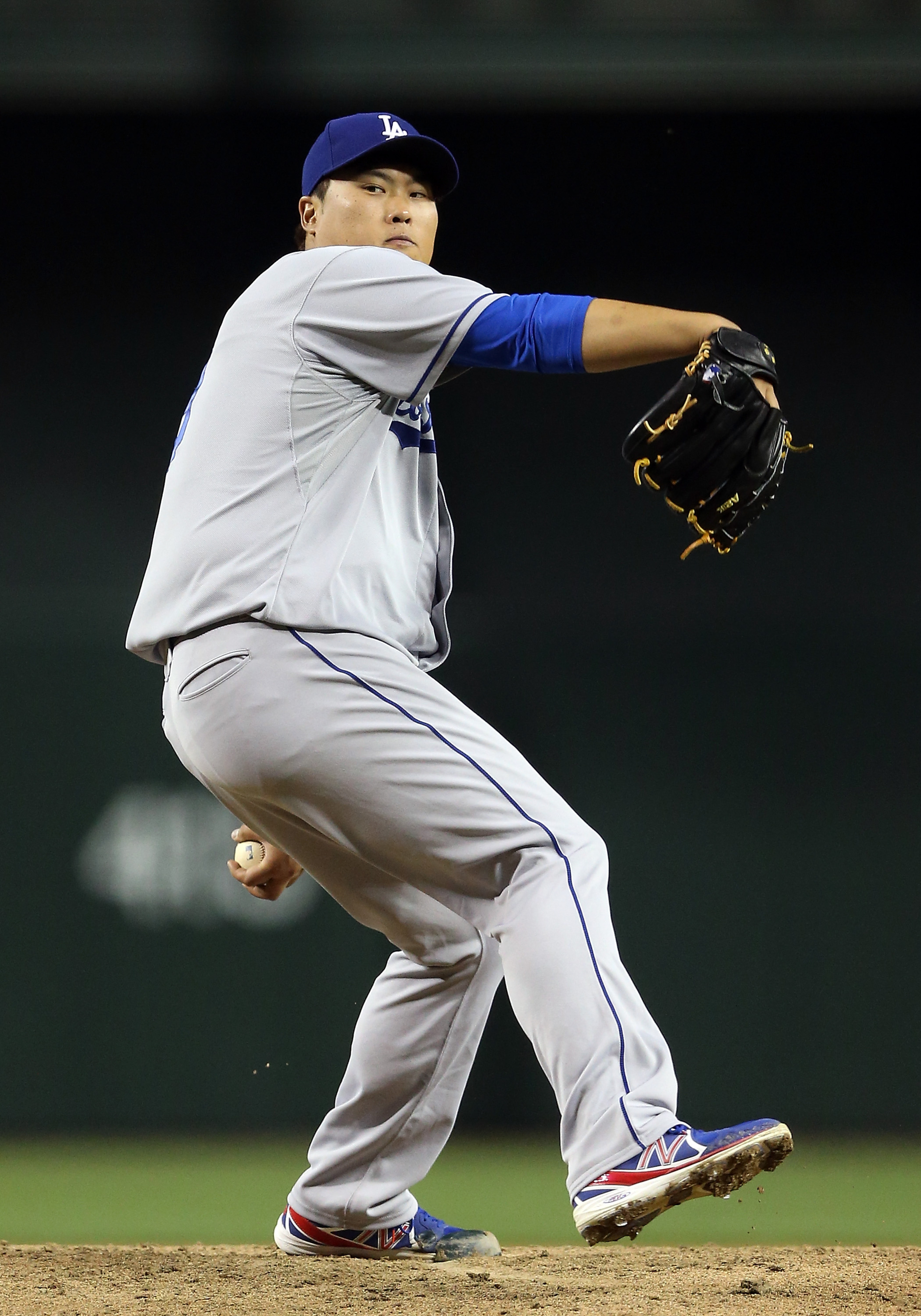 Hyun-jin Ryu allowed three runners to reach base in seven innings, and none of them advanced past first base. in the series opener (Photo: Getty Images).

Jansen's ups and downs: Dodgers closer Kenley Jansen ran the gamut in his four appearances during the week. He struck out Miguel Cabrera in a dramatic showdown on Tuesday, but unfortunately that was only the second out of the ninth inning. Victor Martinez drove in the tying run with a single (the Dodgers won in 10 innings), then delivered the game-winning home run off Jansen the next night in the 10th inning.

Neither Jansen nor manager Don Mattingly were worried, and with good reason as the closer rebounded by striking out three of the four batters he faced in his two weekend saves in Phoenix.

Tuesday: Starting catcher A.J. Ellis had surgery to repair a torn meniscus in his left knee and is expected to miss four to six weeks. Ellis was placed on the 15-day disabled list, and Tim Federowicz was recalled from Triple-A Albuquerque.

Wednesday: Josh Beckett was activated from the disabled list to start against the Tigers, and reliever Jose Dominguez was optioned to Triple-A Albuquerque.

Saturday: 17 days after straining his oblique in a workout at Dodger Stadium, infielder Alex Guerrero was added to the Triple-A Isotopes roster.

The Dodgers run the Royce Clayton gauntlet, finishing up their road trip with three games in San Francisco followed by another weekend series against the Diamondbacks, this time in Los Angeles to open a 10-game homestand at Dodger Stadium.