After scoring seven runs in their first 45 innings of the week, the Dodgers scored 12 runs over their final 13 innings to salvage a split of their six divisional games. The starting pitchers allowed seven runs in six starts.

A look back at a week that saw the Dodgers split six games, dropping a series on the road against the Giants then beating the Diamondbacks in two of three games at home over the weekend.

The Dodgers are 7-1 against Arizona this season, and end the week in first place by a game over San Francisco.

Dodger Batter of the Week: With a pair of home runs during the week, Juan Uribe was the man, especially with his game-tying blast off the left field foul pole with one out in the ninth inning on Friday. The man they call Papi narrowly edges Yasiel Puig, who provided the difference-making three-run home run on Sunday and tied a career high with three walks on Saturday.

Dodger Pitcher of the Week: For pitching a pair of five-inning scoreless starts, Josh Beckett gets the nod, especially with the extra credit of pitching so well while sick on Sunday. He barely beats out Hyun-jin Ryu, who was magnificent again on the road with seven scoreless innings on Thursday in San Francisco.

The entire starting staff was stellar on the whole, putting up a 0.99 ERA while averaging over six innings per start. How did they lose three games?

The offense scored seven runs in the first four games of the week, but rebounded with three big innings on Saturday and Sunday to salvage a split for the week.

"This game is so stupid sometimes," manager Don Mattingly surmised on Friday night. "You swing the bats you get eight or seven, hitting the ball all over the place, next thing you know you're having trouble putting runs on the board. But it's the flow of the game." 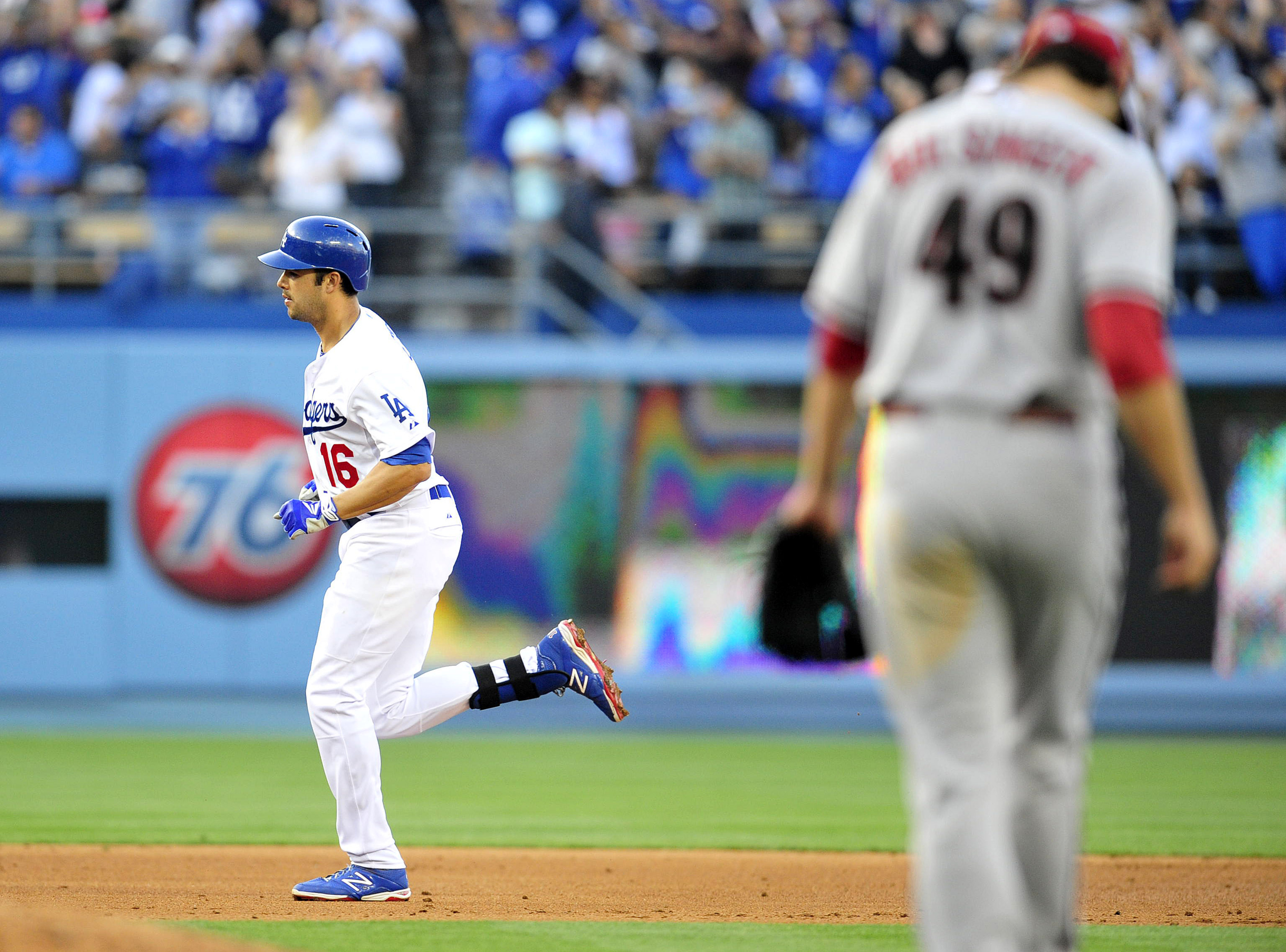 Down 4-0, the Dodgers rallied for eight runs in two innings for their first comeback win of the year, highlighted by Andre Ethier's three-run home run in the fourth. (Photo: Gary Vazquez | USA Today Sports).

Kershaw getting closer: On Sunday at Dodger Stadium, Clayton Kershaw threw 51 pitches in a simulated game with no restrictions, the next step forward in his rehab process. He mixed in all of his pitches and topped out at 90 mph, and is getting closer to a minor league rehab assignment, though no timetable has yet been set.

"It's full effort for me. You can't simulate the adrenaline of a big league game, that's where you get your extra velocity from," Kershaw said. "But for a 10 a.m. sim game, that's pretty much all I got."

Hanley scare:  In a scene eerily reminiscent to the 2013 NLCS, Hanley Ramirez was hit by a pitch, this time in the left hand in the seventh inning on Wednesday against the Giants. He left the game and missed Thursday but has played in three games since. Ramirez is 1-for-12 with a walk and three strikeouts.

Going Extras: In the opener of a 10-game homestand on Friday against Arizona, the Dodgers played 12 innings. Coupled with the final two games of the last homestand, against Detroit on April 8-9, the Dodgers played three consecutive extra-inning games at Dodger Stadium for just the fourth time since the building opened in 1962. The last three-game home streak of extra-inning affairs came on Aug. 5-7, 1982.

Withrow's wild night: On Friday against Arizona, Chris Withrow pitched a scoreless eighth inning against Arizona but in the ninth inning he had his troubles. He walked three and threw two wild pitches, including one wild pitch during an intentional walk to score the go-ahead run. Withrow ended up walking that batter (Martin Prado) unintentionally, and became the first Dodgers reliever with three unintentional walks and two wild pitches in a game since Chan Ho Park on Aug. 31, 1996.

Tuesday: Setup man Brian Wilson was activated from the disabled list. Because he has option years remaining, Paco Rodriguez was the odd man out, sent down to Triple-A Albuquerque.

The Dodgers run the Bruce Ruffin gauntlet, welcoming the Phillies in for four games followed by the Rockies for three next weekend.