Share All sharing options for: Dodgers Week 2 review: Back home

This week in review, which recaps the Dodgers' series win in San Diego against the Padres and the home series loss to the Giants, actually covers eight days since the Dodgers opened the domestic portion of their season on Sunday, March 30 at Petco Park.

I'd like to say there is some philosophical or editorial reason for not having a one-game week in review for that March 30 game alone, but the reality was that I never actually got around to it.

Here's a look back at the week that was for the Dodgers, which saw them split six games with division rivals.

Dodger Batter of the Week: The sentimental choice would be Matt Kemp thanks to his triumphant return, but this week's honor goes to Hanley Ramirez. The shortstop like Kemp homered twice Sunday but also doubled, and also hit two more doubles earlier in the week.

"Hanley is on a different level," Zack Greinke said Sunday. "If Matt's like that, like he was today, you wouldn't want to face this lineup."

Dodger Pitcher of the Week: Zack Greinke made his 2014 debut on Tuesday and gave the Dodgers two solid starts during the week, including eight strikeouts in six innings against the Giants on Sunday. Honorable mention goes to Chris Withrow, who retired all 12 batters he faced, including eight by strikeout. Withrow has retired 14 straight batters. 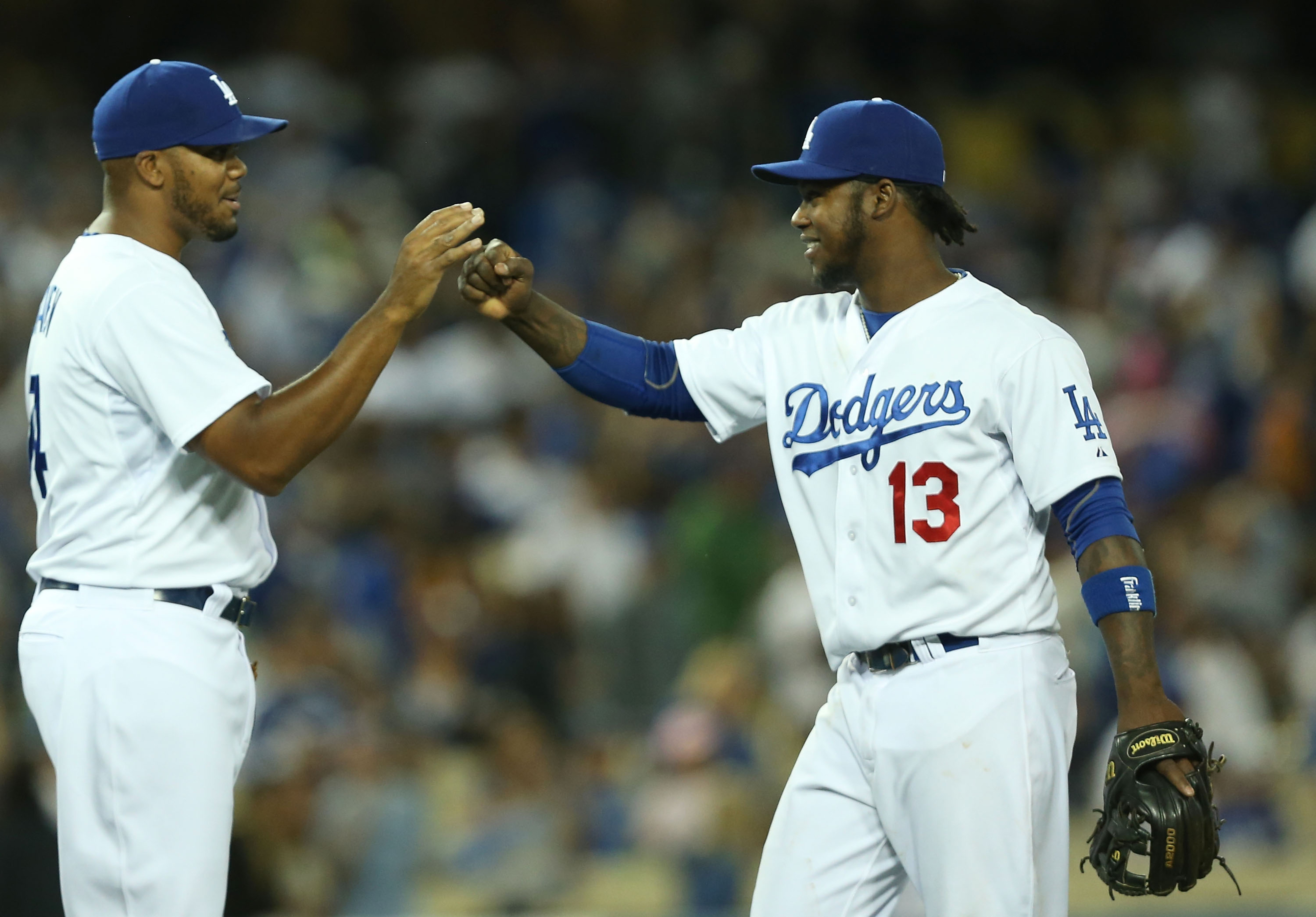 Hanley Ramirez and Matt Kemp each homered twice as the Dodgers salvaged a game against the rival Giants. Also, as Ramirez learned after the game, paper beats rock (Photo: Getty Images).

Singled out: On Sunday against the Giants, the Dodgers hit four doubles and three home runs, but no singles. It was just the 12th game since 1914 that saw at least seven extra-base hits with no singles. The Dodgers also had no walks, joining the 1923 St. Louis Browns as the only teams in the last 101 years to do that.

Sunday marked the 12th time since 1914 that the Dodgers won a game without hitting a single. The previous such game was on August 18, 2012 in Atlanta, which also featured two home runs from Hanley Ramirez, as well as solo shots from James Loney and Luis Cruz.

Thumbs up: The Dodgers had one successful sacrifice bunt all week, and it came from Yasiel Puig, who was really bunting for a base hit and was safe on a throwing error, a play that Padres manager Bud Black wanted to review and probably would have been successful in doing so but informed umpires of his challenge too late. It was the first sacrifice bunt of Puig's career.

Catching up on two weeks worth of moves:

March 25: Carl Crawford was reinstated from the paternity list, and Alex Guerrero was optioned to Triple-A Albuquerque.

March 30: Clayton Kershaw was placed on the 15-day disabled list with inflammation in his upper back, and Jose Dominguez was optioned to Triple-A Albuquerque.

Wednesday: Brian Wilson was placed on the 15-day disabled list with right elbow ulnar nerve irritation, and Dominguez was recalled from Triple-A Albuquerque.

Wednesday: 24-year-old infielder Carlos Triunfel was claimed off waivers from the Mariners, and optioned to Triple-A Albuquerque.

Friday: Matt Kemp was activated from the 15-day disabled list, and Mike Baxter was optioned to Triple-A Albuquerque.

Sunday: Left-handed pitcher Colt Hynes was acquired from the Indians for minor league pitcher Duke Von Schamann. To make room for Hynes on the 40-man roster, Baxter was designated for assignment. Hynes was optioned to Triple-A Albuquerque.

The Dodgers run the Karim Garcia gauntlet, battling the Tigers at home then the Diamondbacks on the road. This could have been called the Max Scherzer gauntlet, as the former D-Back will start for Detroit on Tuesday. Pitching rotations are estimated.