Got Dodger questions? Guy Fieri has the Dodger answers.

Share All sharing options for: Dingers, Deuces and Dodgerquestions

Ed. note: Let's welcome our new columnist Guy Fieri to the fold! Guy will be answering your questions here on True Blue LA each and every week

Hey there this is Guy Fieri and I'm rolling out the mailbag right here, right now on Triple D, Dingers, Dueces, and Dodgerquestions!

Who's the Dodgers MVP this year?

Brutha, my pick for the Dodgers MVP this year is the fiery Cuban Yasiel Puig! Speaking of fiery Cubans I was in Miami and after picking up some bad ass flame shirts I went to a one of the oldest Cuban joints in the city. They served me up a Cuban sandwich right from their home country with a double portion of slow braised pork (just how I like it) and some SMC (that's Super Melty Cheese). It was the bomb. Dot. Com! After that they gave me some rice and beans made with the same recipe their great-great-grandmother used! They were good, but I knew what would make them better. I mixed up a batch of Guy's patented Blue-Sabi sauce, slathered my meal in it and put those beans on the train to flavor town! They didn't thank me when I had one of my crew throw up a "Guy was Here" decal on their wall, but Guy's not in it for self promotion.

The Dodger bullpen is struggling, what would you do to fix it?

Brutha, I would make my good friend Brian Wilson the closer! Don't believe I've hung out with B. Willy? Here's us on George Lopez doin....well I forgot but it sure looks legit! 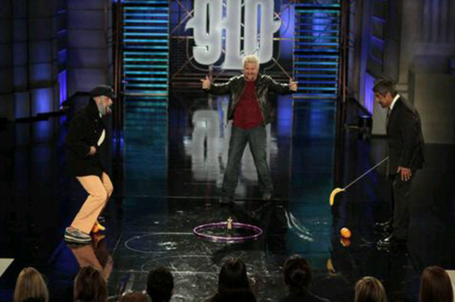 B-Will's sailor outfit gave me a craving so after the show whipped us up some of Tex Wasabi's Koi Fish Tacos! They're fish tacos that I do in my own funky way, breaded and fried tempura batter and panko! Well what goes better with panko than a couple drankos so B. Money said he knew a place. He took me to some basement in K. Town and I swear the guy from Enter the Dragon (waaaaa-chaaa!) was there even if he wouldn't admit it. Last thing I remember, Big Bizzie was hangin' dong down Olympic then suddenly it was four days later and I was hostin' Triple D down in Cincinnati eating a foot long chili dog topped with thick cut applewood smoked bacon and a meat blanket of pastrami. The dog was over the top!

Alex Guerrero is tearing up AAA, but there's no place to put him. What do you do?

Brutha, I would call Alex Guerrero up right now! The Dodgers need that spark plug in the lineup! Speaking of right now, did you ever hear about how I met my brother from another mother, the Red Rocker himself, Sammy Hagar? I was cooking with his Cabo Wabo tequila (money) so I invited him up to my restaurant, Johnny Garlic's to have a little brodown. He pulled up in his GT500 as I pulled up in my Corvette and we immediately compared the specs. It was like I knew him my whole life! After I busted out the grill and cooked up some of Guy's Off Da Hook Original Smash Burgers with my signature donkey sauce + some good ol' LTOP, we got to talkin' about Sammy's big comeback. One thing leads to another, and I'm in the studio layin' down bongos for Sammy's new track! A dream come true for a real rocker like me! Check out our collab Girls, Grillin' N' Goatees in stores June 31st

If you could describe the Dodgers recent play in one word what would it be?

Brutha, if I had to describe the Dodgers play recently with one word it would be "Smashmouth"! You know that reminds me of when I was in Des Moines filming an episode of Triple D where they served a fried bacon and brisket sandwich smothered with mac and cheese that was out. Of. Bounds. I saw that my brother from another mother, Steve Harwell and his boys from Smashmouth was opening up at the county fair! Guy always treats one of his guys right, so I picked up the ingredients for my famous Parmageddon wings, a bottle of Jaeger and met Steve and the crew back stage. We chowed down on those wings while we listened to the sweet sounds of Magical Eddie and his Make Believe crew on stage (they say it's for kids, but brutha, Teddy Van Halen can lay down some sick licks). We hit the Jaegar pretty hard because like I say if you're gonna do something that's not supposed to be good for you, then do the over-the-top super duper version of it, so I can't tell too much else of the story, but let's just say Guy isn't allowed back in Des Moines any time soon.

Ed. Note: Guy Fieri has been put on indefinite hiatus