The Dodgers open their second of two 10-game homestands on Monday, starting a three-game series against the Reds at Dodger Stadium. Here is a look at the pitching matchups against Cincinnati.

Hyun-jin Ryu makes his second start since returning from the disabled list, emboldened by a season-high nine strikeouts last Wednesday against the Mets. Ryu also struck out nine Reds last July 27 in a win against the Reds at Dodger Stadium that saw the left-hander allow just one run in seven innings. 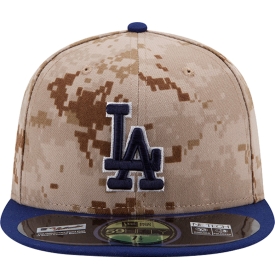 All of baseball will wear a special cap with a camouflage design for Memorial Day. Here is the Dodgers' version.

Alfredo Simon put up sub-3.00 ERAs in his first two years in Cincinnati out of the bullpen, and now the 33-year-old is doing the same in the starting rotation. Simon has a 1.05 ERA in five road starts this season, with 27 strikeouts and 10 walks in 34⅓ innings.

Clayton Kershaw has faced Cincinnati three times in his career at Dodger Stadium, and has given up a total of five runs. He has lasted at least seven innings in all three starts, with 23 strikeouts in 22 innings. But the Dodgers have lost two of the three games, thanks in part to scoring exactly two runs in all three games. Homer Bailey has four quality starts in his five May outings, but has also allowed four or more runs in five of his 10 starts in 2014.