The Dodgers right fielder was hurt on the final play of the week, but before that was red hot at the plate.

A look back at the week that saw the Dodgers offense show some life, and not just with a designated hitter in Minnesota. The Dodgers weathered the storm in Minnesota and swept the Twins, then dropped two of three in Miami against the Marlins. The net result was a 4-2 week.

Dodger Batter of the Week: Yasiel Puig at one point during the week reached base in nine straight plate appearances and was 8-for-8. He just kept hitting, all the way to Sunday afternoon, when he nearly made a game-saving catch before crashing into the wall on the final play against the Marlins.

Honorable mention goes to Dee Gordon, who had a rare five-hit, three-steal game on Saturday and at one point had an 8-for-10 streak of his own; and to Juan Uribe, who quietly hit .400 with five walks and six runs batted in. 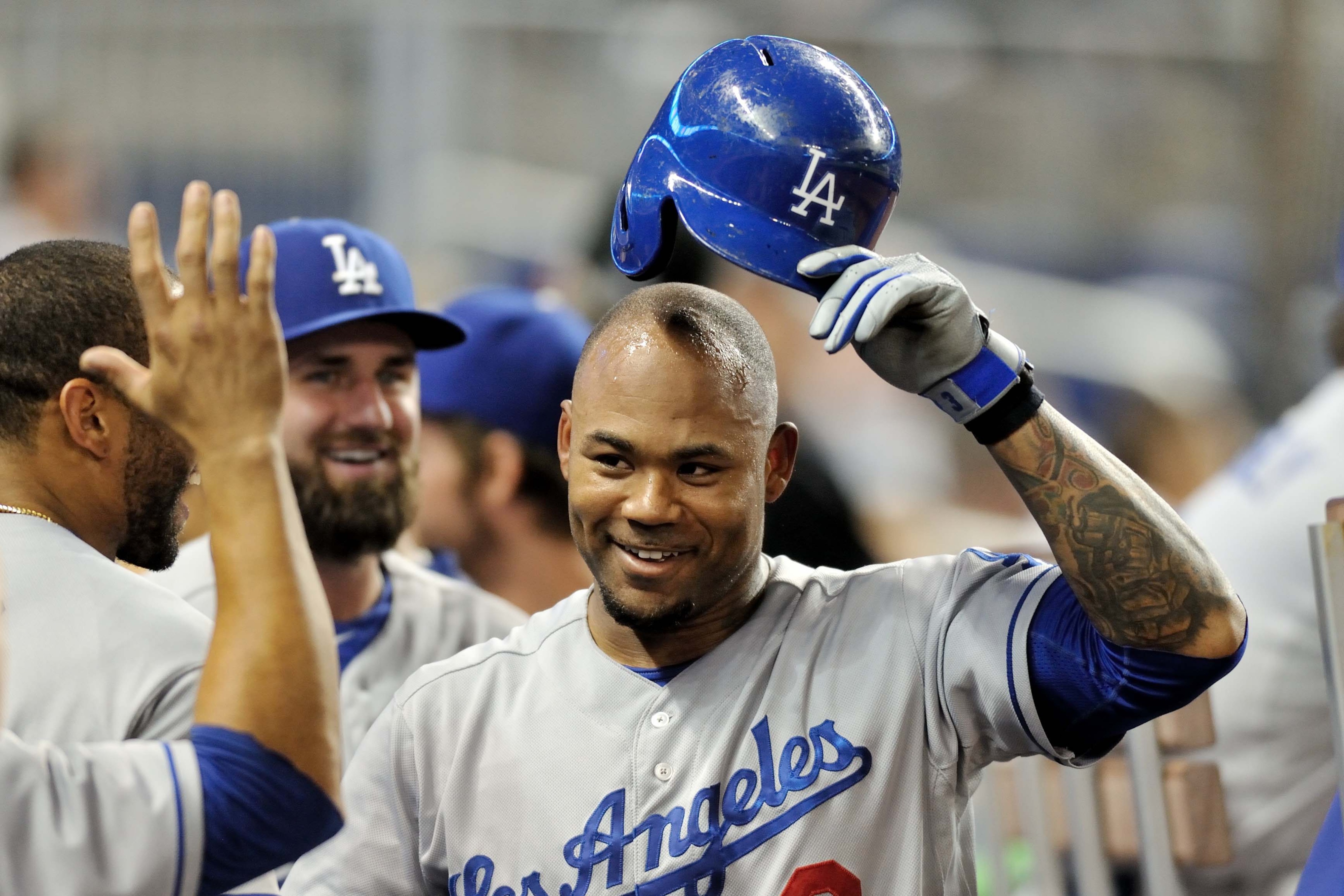 A game the Dodgers at times had in the bag then should have lost ended up decided by a slumping Carl Crawford, hitting his first home run of the year in the 11th inning. (Photo: Steve Mitchell | USA Today Sports).

Dodger Pitcher of the Week: The Dodgers used six different starters in six games this week, and seven different starting pitchers dating back to last Sunday. The most effective was Zack Greinke, who allowed an unearned run in six innings in a win in Minnesota. Had Jamey Wright recorded one more out on Sunday he might have taken this award but had an otherwise solid week.

Quote of the week: Carl Crawford was out of the lineup on Saturday in the midst of a long slump, but hit a two-run home run in the 11th inning to win the game.

#Dodgers Carl Crawford on game-winning HR after 4-for-45 slump: "It's like busting that big pimple or something. You know things are bad."

Tuesday: After just one game with a regular, five-man bench, the Dodgers optioned infielder Carlos Triunfel to Triple-A Albuquerque, and went back to 13 pitchers by recalling Paco Rodriguez from the Isotopes.

Wednesday: Wanting to add more offense from behind the plate, the Dodgers optioned catcher Tim Federowicz to Triple-A Albuquerque and called up Miguel Olivo from the Isotopes. To make room for Olivo on the 40-man roster, pitcher Chad Billingsley was transferred to the 60-day disabled list.

Thursday: With the doubleheader in Minnesota, the Dodgers were able to add a 26th man. Red Patterson was called up from Triple-A Albuquerque to make his major league debut in starting the second game. To make room for Patterson on the 40-man roster, outfielder Nick Buss was designated for assignment.

Friday: Hyun-Jin Ryu was placed on the 15-day disabled list, retroactive to April 28, with left shoulder inflammation, and Jose Dominguez was recalled from the Isotopes.

Friday: In a bit of roster manipulation, the Dodgers actually designated Paco Rodriguez, and not Red Patterson, as the 26th man for the doubleheader. Both were sent back to Triple-A Albuquerque on Friday, but while Patterson was optioned Rodriguez was "returned," allowing the team to be able to bring him back inside of 10 days if they so choose. Chone Figgins was recalled from Triple-A Albuquerque, bringing the Dodgers back to 12 pitchers on the active roster.

Sunday: To replace the injured Ryu, Stephen Fife was recalled from Triple-A Albuquerque for a spot start on Sunday in Miami. Jose Dominguez was optioned back to Triple-A.

Sunday: Outfielder Nick Buss was claimed off waivers by the Athletics.

The Dodgers run the Chris Speier gauntlet, finishing up the road trip in Washington then coming home for a four-game series against the Giants.