How often do draft picks turn into regular players?

Grant Holmes is the next great hope for the Dodgers, but the odds of him taking over a slot on the rotation are longer than you think.

Share All sharing options for: How often do draft picks turn into regular players?

The draft represents the dreams of a better tomorrow. Sure you may be mired in last place now, but these guys coming up, they can be anything. Just like your new baby could be President this new set of players could be the start of a dynasty, bringing home rings and excuses to drink at nine A.M. on a Tuesday. Unfortunately, reality sucks. It's much more likely that your baby will end up being someone that posts graphs on a blog on a semi-weekly basis, and this new crop of guys will probably break your heart.

I've long believed that the most likely scenario for all but the most elite prospects is "guy who drifts between AAA and the bigs for a couple years, then goes to a sad little team like the Pirates until he disappears completely". All I've had to support this is the anecdotal evidence of broken dreams, but thanks to Minor League Central's new draft filters I can finally get some solid numbers on how often a prospect becomes a regular.

For our purposes, I'm going to define a regular as a player that qualifies for either the ERA or batting title1. I don't care about how a player performs, but looking only at regulars should leave us with mostly decent players and Mike Moustakas. I'll also look at multiple years to catch guys who may have missed time due to an injury in one year. With that in mind, here's how many regulars the 2005-2012 draft classes have produced since 20112. 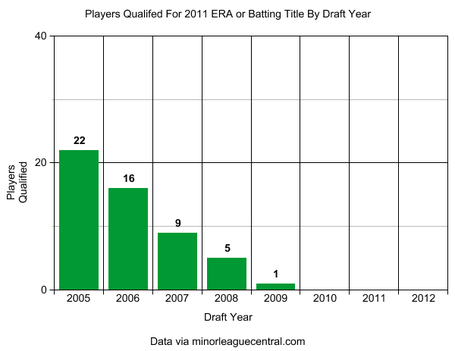 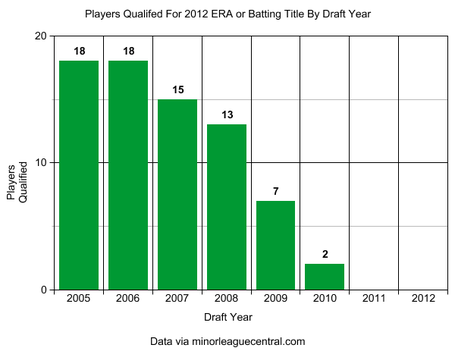 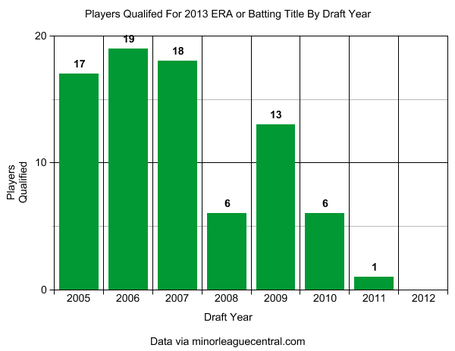 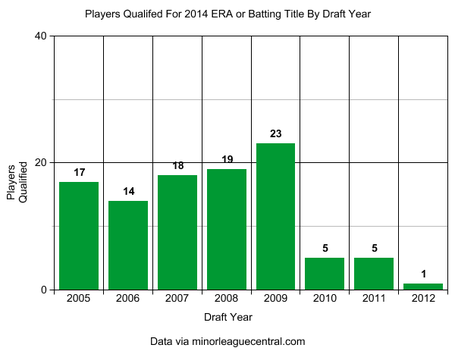 Even as someone who believes that almost all prospects are doomed to failure, these results seem low. An average draft class only has 15-20 regulars per year? A lot of these names are players who only held a job for a year or two like Jemile Weeks or Chris Volstad so the number of guys who hold these jobs for years are even lower? Is it really true that if you draft one regular every two years you're doing just fine?

After putting these numbers in some context though, it makes sense. There are 405 everyday jobs in the MLB. A lot of guys put in these roles at the start of the year are going to get hurt. Some are going to be placed in a platoon role where neither guy gets 502 plate appearances. Still more will go to guys whose job is to stand there for two months until a prospect is ready. At the end of the day, there are only really 200-250 "everyday" players a year. These jobs are going to players representing 20 or so draft classes and a large number of undrafted international free agents. With that in mind, 15-20 regulars a draft class seems reasonable.

The guy who takes the ball every fifth day or runs out to his position year after year isn't that common. We all want to believe there's a huge crop of guys ready to take over for the old guard and form the next dynasty but in most cases it's just not true. We should be happy if a prospect finds his niche as a platoon player or middle reliever for a couple years, we should recognize that even the James Loney's of the world represent one of the best case scenarios for a draftee, and we should thank our lucky stars every day we've been blessed with Clayton Kershaw. Can I get an amen?

2. 2014 numbers current as of June 18th. A break down of hitters and pitchers can be found here. If you want the entire list of qualified players, they can be found through the Minor League Central leaderboards.↩