25 years ago today: Dodgers lose in 22 innings to Astros

25 years ago at the eighth wonder of the world, the Dodgers lost to the Astros 5-4 in one of the more memorable games in franchise history.

Share All sharing options for: 25 years ago today: Dodgers lose in 22 innings to Astros

On June 3, 1989, 25 years ago today, the Dodgers were in Houston for the third game of a four-game weekend series against the Astros at the Astrodome in Houston. What ensued was one of the most memorable games in both team's histories and what still stands as, by time, the longest night game in National League history.

The Dodgers, one season after winning the World Series, were off to a rough start. They were 25-26 after dropping the first two games of the series in Houston, 4½ games behind San Francisco and in fifth place in the National League West. The Astros were 29-24 and went into Saturday night having won eight straight games.

The Dodgers struck first, with a pair of one-out singles by Mickey Hatcher and Kirk Gibson in the first inning, but Hatcher strained his left hamstring running from first to third and had to be removed. After a walk by Eddie Murray, third baseman Jeff Hamilton singled home two runs.

Murray doubled in the third inning and evenutally scored on a wild pitch by Knepper, giving the Dodgers a 3-0 lead.

Leary was cruising into the fourth inning, when Glenn Davis homered for Houston. But Gibson answered back with a solo shot in the fifth pushing the Dodgers lead to 4-1.

That score remained until the bottom of the sixth inning, when Leary all of a sudden lost it with two outs. He walked Bill Doran, Davis, and Terry Puhl in succession to load the bases. Manager Tommy Lasorda pulled Leary in favor of reliever Tim Crews, who was greeted by singles from Ken Caminiti and Rafael Ramirez to tie the game at 4-4.

Then, nothing. For several hours, and 15 innings.

Houston put runners on second and third base with one out in the 11th inning but when Gerald Young flew out to center field, John Shelby - who was 0-for-10 at the plate - threw out Craig Reynolds at the plate to keep the Dodgers alive.

After using all five relievers - yes, only five - to get through the 11th inning, the Dodgers turned to Mike Morgan, who pitched two scoreless innings just two days after throwing 73 pitches in his start on Thursday, allowing six runs in four innings in a loss. 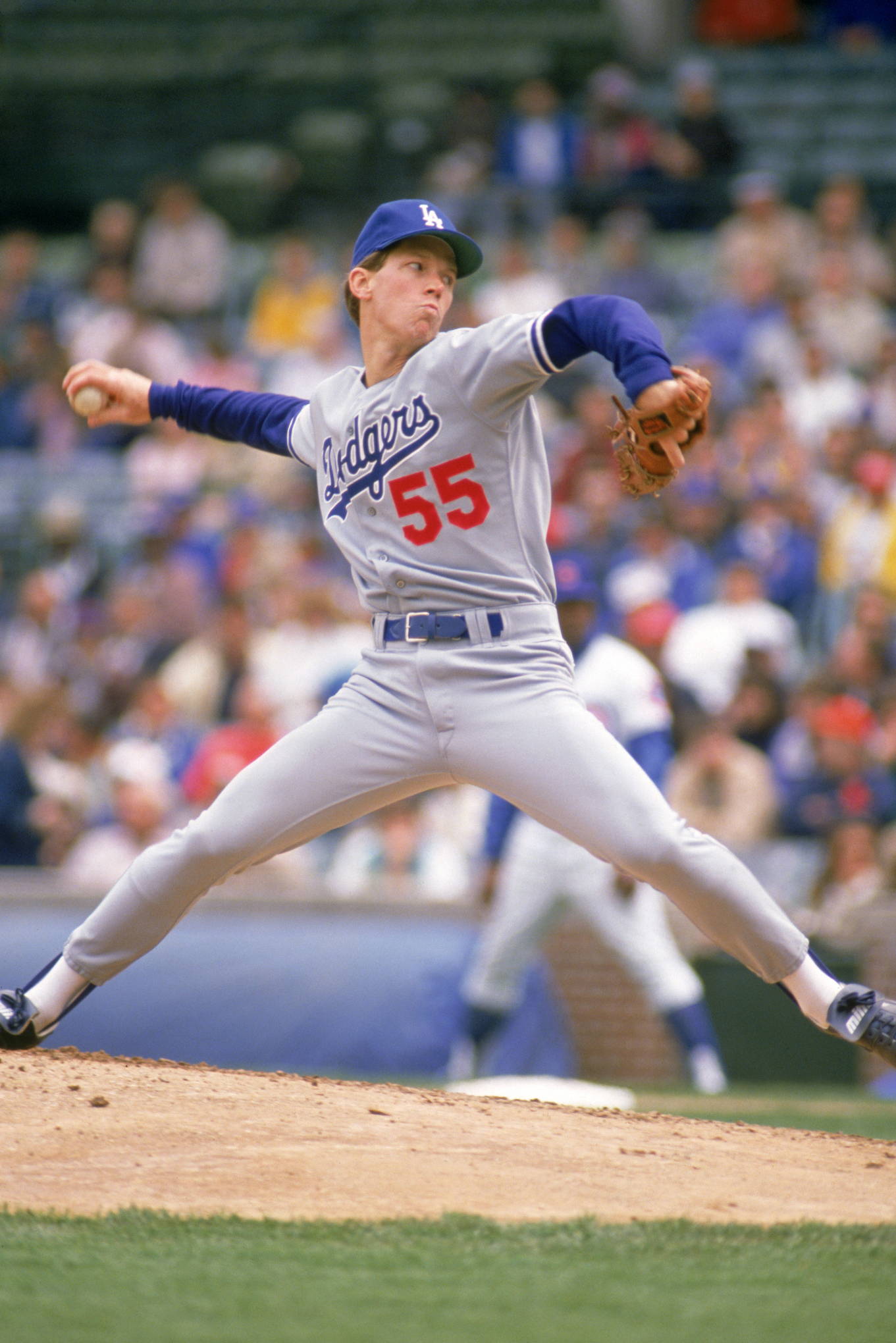 Hershiser pitched seven scoreless innings in both 22-inning games for the Dodgers in 1989. (Photo: Getty Images)

To start the 14th inning, Lasorda turned to Orel Hersisher, who threw seven innings just three days earlier in a win over the Expos. Hershiser, who lead the National League in innings pitched in both 1987 and 1988, plus another 42⅔ innings in the postseason in 1988, was second in the NL in innings pitched to this point in 1989, averaging 7.61 innings per start.

"I knew when I saw Hershiser come in, it ws going to last a while," Davis told the Houston Chronicle.

Houston threatened again in the 15th with the bases loaded with one out against Hershiser, but when former Dodger Alex Trevino flew out to left field, Chis Gwynn threw home to get Puhl, the Astros' second out at the plate in five innings.

Hershiser, on two days rest, struck out eight on the night and pitched seven scoreless innings, through the 20th.

Hershiser batted in the top of the 21st and grounded to third, with potential go-ahead run Mike Scioscia thrown out at the plate. But after 87 pitches on two days rest, Hershiser was taken out of the game. But having used all five bullpen members on Saturday, having used Thursday's starter for two innings, having used Wednesday's starter for seven innings, and with Sunday starter Tim Belcher sleeping at the team hotel, Lasorda was down to two options.

Fernando Valenzuela, who started Friday and threw 114 pitches in seven innings, or a position player.

Lasorda opted for Hamilton, who played 20 innings at third base and drove in the first two runs way back in the first inning. He last pitched in high school. In 1982. Murray moved from first to third base, his first time at the position since 1978. Valenzuela was brought in to play first base for the first time in his career.

Belcher was the only player on the Dodgers 24-man active roster not to be used in this game.

"It felt to me that we were conceding the game," Hershiser told the Times.

"After throwing across the infield for [20] innings," Hamilton told the Houston Chornicle, "I didn't think I'd have much. The velocity drops real quick after an inning."

That velocity was clocked either at 91 or 92 mph depending on the source, but Hamilton needed only 10 pitches to get through the 21st inning in order, including a strikeout of Billy Hatcher.

That one bad pitch came in the 22nd, which began with a single by Doran. Hamilton then got cleanup man Davis to ground out then, after an intentional walk to Puhl, struck out Caminiti for the second out.

Hamilton was ahead of Ramirez 0-2, but with the 6'2 Murray at third base the shortstop lined a ball just off the outstreched glove of the 5'11 Valenzuela at first base into right field. Mike Davis threw home but Doran got the best of Scioscia in a collision at home to score the winning run.

Scioscia didn't start, but was involved in three plays at the plate.

"I still can't believe I was out there. I've always wanted to pitch, but I'm mad about losing," Hamilton told the Times.

Hamilton is the only Dodgers position player ever to get a decision on the mound.

At 22 innings, it is the longest game by innings in Los Angeles Dodger history, tied with a game later that season (more on that later).

Davis, who entered the game for Hatcher in the first inning, was 0-for-8 with a walk and a run scored, the most hitless at-bats ever in a game by a Dodgers reserve.

Hamilton was one of five Dodgers to play all 22 innings, joining second baseman Willie Randolph, Murray, Shelby and Griffin.

The seven-hour, 14-minute game ended at 2:52 a.m. local time, with a 1:30 p.m. game scheduled the next day. That game went 13 innings, another Astros walk-off win. After getting swept in four games in Houston, the Dodgers opened a series in Atlanta with a doubleheader on Monday. Hershiser was originally scheduled to pitch one of the two games, but after seven innings on Saturday was pushed back.

The Dodgers called up 21-year-old Ramon Martinez to start the first game of that doubleheader in what was a spot start. Martinez, pitching in his 10th major league game, threw a six-hit shutout and struck out nine. The problem was, nobody told Martinez, who arrived in Atlanta with several bags, his start was one-and-done, and he didn't take it so well when he was optioned back to Triple-A Albuquerque.

John Wetteland, who made his major league debut on May 31 and recorded two outs in relief in Houston, made his first major league start in the second game of the doubleheader on Monday in Atlanta.

In those days, Jaime Jarrin would call the first four innings of the Dodgers' Spanish language broadcast, then have Rene Cardenas call innings five and six, with Jarrin finishing off the game. Jarrin said in the Houston game, Cardenas went downstairs in the eighth inning to prepare to interview a postgame guest. The only problem was that postgame was a long time coming, and Cardenas couldn't logistically go back and forth so he stayed downstairs while Jarrin called the final 16 innings.

Vin Scully had an even stranger day. The Dodgers split radio and television between Scully, Ross Porter and Don Drysdale, but on weekends with Scully calling the game of the week for NBC he was often gone on Fridays and Saturdays. That changed in Houston, when on Thursday Drysdale got laryngitis and couldn't continue. Scully didn't go to St. Louis for Friday meetings for his Saturday game between the Cardinals and Cubs, instead staying back to call the Dodgers game in Houston.

Instead of flying to St. Louis Friday, he went there Saturday morning, courtesy of a private jet hired by Dodger owner Peter O'Malley.

Scully figured he could fly into St. Louis and be back in Houston in plenty of time to make the start of the night game there.

But things didn't go quite as planned.

First, the game in St. Louis, in which the Cardinals beat the Chicago Cubs, 6-5, went 10 innings and lasted nearly 3 1/2 hours.

Then there was a traffic jam going from Busch Stadium to the airport, and he made it back to the Astrodome in Houston just in the nick of time.

Scully, on the phone from Houston after Sunday's game, recalled the moment: "The national anthem was just finishing when I stepped into the booth and said, 'Good evening, ladies and gentlemen,' as though I'd been there waiting for an hour."