Share All sharing options for: Dodgers Week 18 review: A sweep in San Francisco

More than two weeks ago, before the All-Star break, Dodgers manager Don Mattingly set his post All-Star break rotation with the San Francisco series in mind. The plan worked to perfection, as Zack Greinke, Clayton Kershaw and Hyun-Jin Ryu keyed a three-game weekend sweep of the Giants, outscoring San Francisco 17-4 in the process.

The Dodgers overcame a two-week offensive slump and helped turn around a road trip that ended 5-4, propelling the Dodgers into first place in the National League West by 1½ games.

Dodger Batter of the Week: First baseman Adrian Gonzalez led a middle of the order resurgence, hitting .435 (10-for-23) with five extra-base hits and seven RBI. Yasiel Puig (three triples and a double on Friday) and Hanley Ramirez (three multi-hit games) came back from left hand injuries to bolster the offense in San Francisco.

Dodger Pitcher of the Week: On Saturday in San Francisco, Clayton Kershaw continued his mastery of San Francisco with a two-hit shutout of the Giants. He has allowed seven runs in 10 career starts at AT&T Park in San Francisco. Zack Greinke was just as good on Friday, with 10 strikeouts in his seven scoreless innings, fitting the Dodgers' blueprint to a tee. 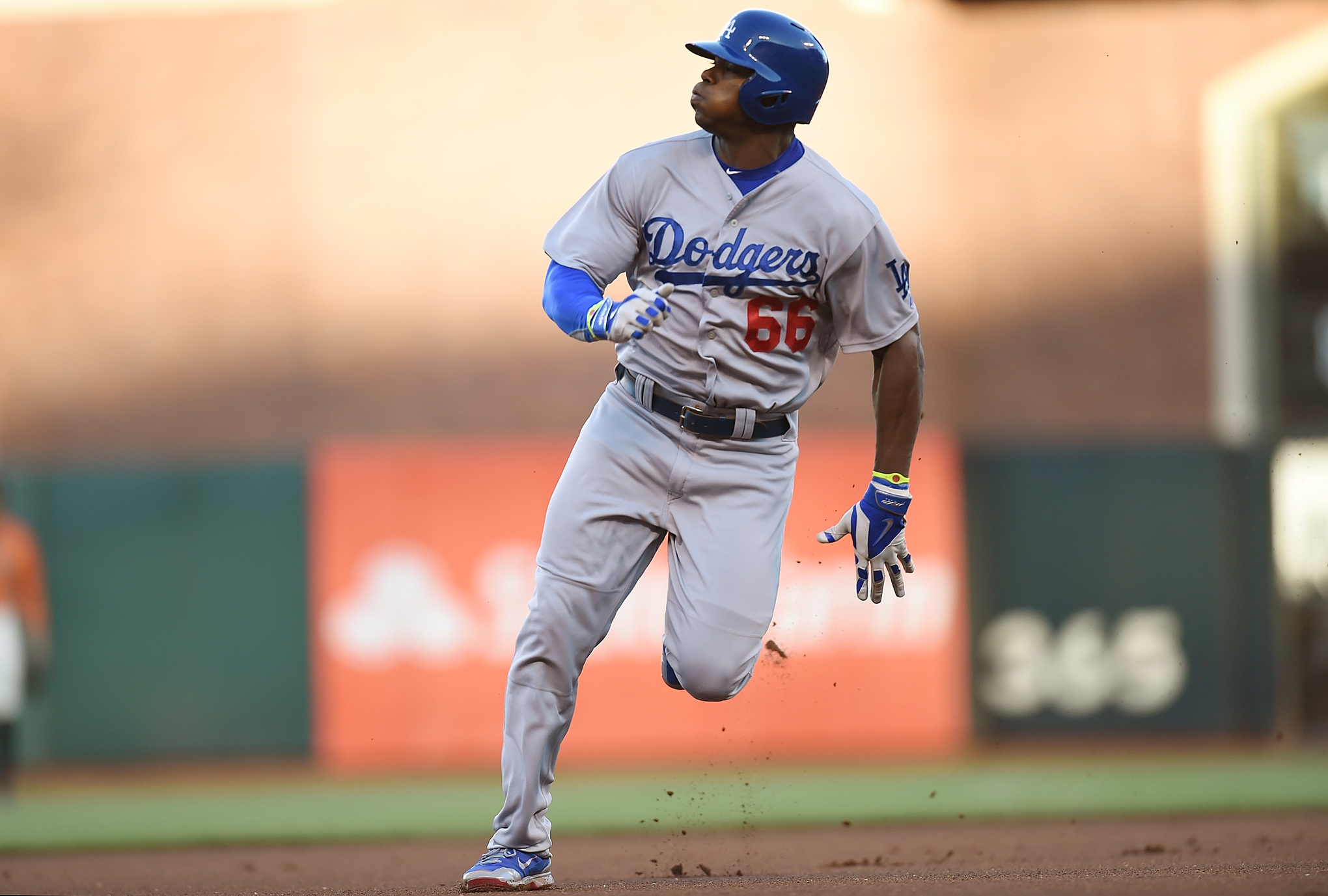 Yasiel Puig hit three of the Dodgers' five triples in an 8-1 rout in the series opener in San Francisco. (Photo: Getty Images).

The Dodgers pounded out five triples as a team in Friday's win over the Giants, including the major-league-leading 10th of the season by Dee Gordon, the first Dodger with double-digit triples since Kenny Lofton hit 12 in 2006. Three triples were hit by Yasiel Puig, tying Jimmy Sheckard's 1903 franchise record for three-baggers in a game.

In the eighth inning on Tuesday at PNC Park, in his first series in Pittsburgh where has father Andy roamed the outfield for eight seasons, Scott Van Slyke hit a solo home run to pull the Dodgers within 8-7. It was the first pinch hit home run of the season for the Dodgers.

In the third inning on Saturday in San Francisco, a wild pitch marred an otherwise marvelous inning for Zack Greinke, who finished the inning with four strikeouts, tying a major league record. Greinke is the fifth Dodgers pitcher to strike out four in an inning, and the third major league pitcher ever with two career four-strikeout innings.

In the ninth inning in Pittsburgh on Tuesday, Chris Perez had an inning to forget, allowing four runs in the Dodgers' 12-7 loss to the Pirates. But what made his outing stand out was his four consecutive walks, the first Dodgers relief pitcher to do so since Jesse Orosco in 1988.

The respective rehabilitation assignments for Alex Guerrero and Erisbel Arruebarrena, the pair of Cuban infielders the Dodgers signed in the offseason for a total of $53 million, ended last week, and the two crossed paths in stormy fashion.

Guerrero after missing seven weeks from a brawl with a teammate finally returned to Triple-A Albuquerque on Saturday. But in his first game back another fracas ensued, this time with Arruebarrena at the center of the storm in a benches-clearing brawl with Reno that resulted in 10 ejections. Arruebarrena on Saturday was technically on a rehab assignment while on the major league disabled list, but by Sunday was optioned back to the minors and in Class-A Rancho Cucamonga.

Tuesday: After missing one start on the disabled list with a left hip impingement, Josh Beckett was activated to start in Pittsburgh, with relief pitcher Paco Rodriguez getting optioned back to Triple-A to make room.

Sunday: One day after being the central figure in a massive Triple-A brawl while technically on a rehab assignment, shortstop Erisbel Arruebarrena was activated from the disabled list and optioned to Class-A Rancho Cucamonga.