The Dodgers faced off with the teams with the second-best records in both leagues and escaped with a winning record. They won four of their seven games this week, including capturing three of four game against the Angels for their first series win over the Halos since 2006.

The Dodgers lost Hanley Ramirez, Josh Beckett and Paco Rodriguez to injury, and also traded for two starting pitchers for the stretch run.

They end the week with their largest divisional lead of the season (4½ games) and the best record in the National League.

Dodger Batter of the Week: In a week that began 0-for-14 with a walk in his first 15 plate appearances, Adrian Gonzalez finished with authority, going 9-for-12 with five extra-base hits and seven RBI. Gonzalez finished his week with four straight multi-hit games.

Dodger Pitcher of the Week: In a week that saw the Dodgers trade for two starting pitchers to help their back-end depth, the starting rotation was fantastic as a whole. The group came two outs shy of averaging seven innings per start, led by Hyun-jin Ryu and his seven scoreless innings to beat the Angels in Anaheim on Thursday. 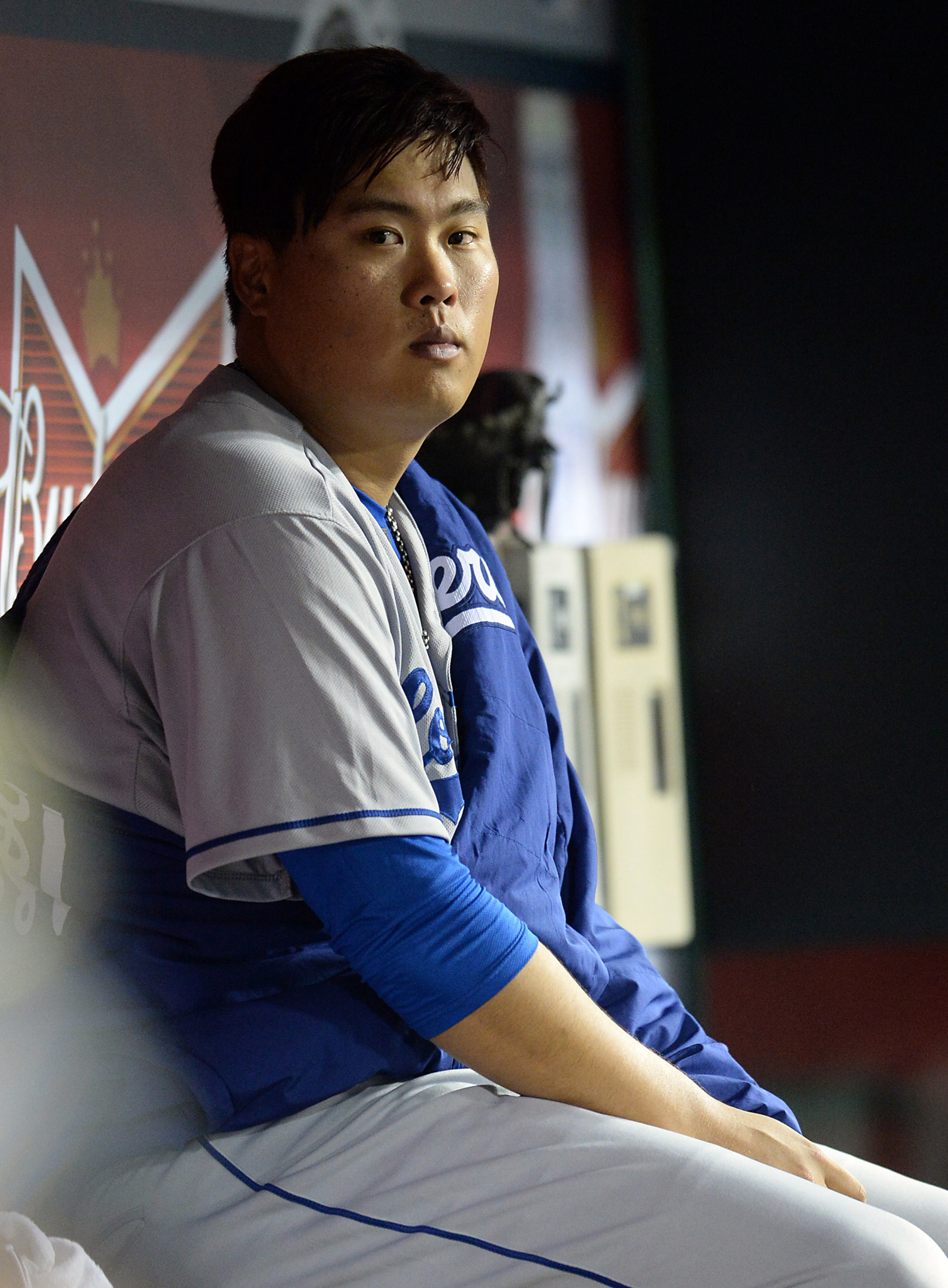 Carlos Frias made his major league debut on Monday against the Angels. The 24-year-old allowed a single in two scoreless innings on Monday, with two strikeouts.

Roberto Hernandez singled in his first at-bat as a Dodger on Friday in Milwaukee. He was 2-for-54 with 28 strikeouts in his career to that point, including 0-for-14 with eight strikeouts as Fausto Carmona (through 2011 with Cleveland). The hit also snapped an 0-for-21 skid by Dodgers pitchers.

Hyun-jin Ryu has faced the Angels twice in his career, including on Thursday night in Anaheim. He allowed two hits and no run in each game, 16 innings in all.

Monday: With the back end of the Dodgers' starting rotation in disarray, Carlos Frias had his contract purchased from Triple-A, joining the 40-man roster for the first time. Relief pitcher Chris Perez was placed on the 15-day disabled list with bone spurs in his right ankle. To make room on the 40-man roster for Frias, the club transferred Paul Maholm, he of the torn ACL in his right knee, from the 15-day to the 60-day disabled list.

Tuesday: It has been that kind of year for Paco Rodriguez, who less than a week after getting recalled was placed on the 15-day disabled list with a strain of his teres major muscle. Pedro Baez was recalled from Triple-A Albuquerque.

Wednesday: With no room on the active roster after his 20-day minor league rehab assignment ended, Chone Figgins was designated for assignment.

Thursday: With an upcoming starting void looming the next day, the Dodgers acquired Roberto Hernandez from the Phillies for two players to be named later or cash.

Friday: To create room for the activation of Hernandez to start in Milwaukee, Josh Beckett was placed on the 15-day disabled list with a left hip impingement.

Saturday: The quest for pitching continued with the acquisition of Kevin Correia from the Twins for a player to be named later or cash. Correia will be a swing man for the Dodgers, but will first make a spot start on Monday in Atlanta.

Sunday: To make room for Correia on the 40-man roster, the Dodgers designated Colt Hynes for assignment.

Sunday: In a year full of nagging injuries, it was a right oblique strain that finally sent Hanley Ramirez to the 15-day disabled list. The Dodgers recalled infielder Darwin Barney from Triple-A Albuquerque.

The Dodgers run the Dion James gauntlet, with four games in Atlanta followed by a return home to face the Brewers for a second consecutive weekend.