Share All sharing options for: Dodgers Week 19: Matt Kemp on a power surge

The last week provided a test in fan psychology. The Dodgers won four of six games, including a sweep of the contending Braves but also a series loss to the lowly Cubs. Had the Dodgers won two out of three games in both series or if the Cubs series preceded the Braves the Dodgers might have left a better taste in the mouths of fans last week.

But instead the two weekend losses to the Cubs are the most recent, taking the luster off an otherwise positive week. More importantly, the week will be remembered for Matt Kemp finding his power stroke.

Kemp before last week had five home runs in his previous 77 games.

Since Kemp started having his injury issues with a pair of strained hamstrings two years ago he had five home runs in a single month just once, when he hit six home runs in September 2012.

Dodger Batter of the Week: This was a close batter with two stellar competitors, but Matt Kemp takes the cake with the best Dodgers power surge of the season. Kemp hit .409 (9-for-22) with five home runs and nine RBI in six games. Kemp was so good that he beat out Yasiel Puig, who hit .550 (11-for-20) and slugged .900.

Dodger Pitcher of the Week: Another two-person race was close. Zack Greinke is the honoree with a season-high 13 strikeouts in eight innings against the Braves on Wednesday. He narrowly beat out Clayton Kershaw, who pitched yet another complete game on Thursday to complete the sweep of Atlanta. 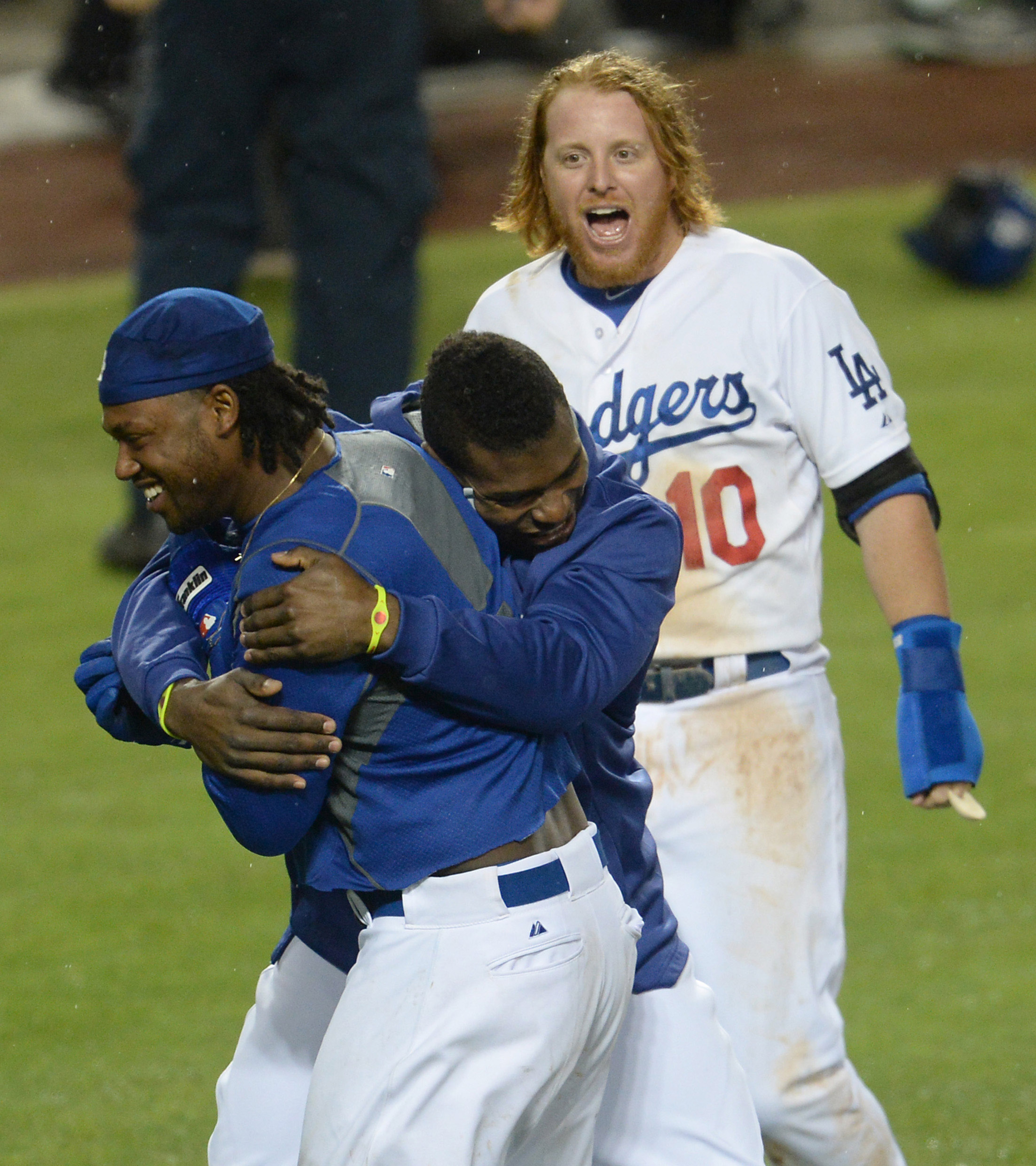 On Tuesday during the game against the Braves, it was announced that legendary Hall of Fame announcer Vin Scully would return in 2015 for a record 66th season. The next day Scully, who turns 87 in November, was as unassuming, and as funny, as ever.

"In all honesty, I don't feel like I've done anything. I just happen to be there. It's not something I've taken for granted. I am humbled, believe me, for being given the honor of working the games all these years," Scully said, then added with a smile, "It's a long time to be working at one job, with no advancement."

Monday: Three days before the non-waiver trade deadline, the Dodgers made what would be their only move, acquiring infielder Darwin Barney from the Cubs for a player to be named later.

Monday: Former Angels and Diamondbacks pitcher Barry Enright was signed to a minor league deal, and started for Triple-A Albuquerque on Monday.

Tuesday: After nearly two years since he threw his last pitch for the Dodgers, and after long rehab period after three elbow surgeries in between, Scott Elbert was activated from the 60-day disabled list and designated for assignment, removing him from the 40-man roster.

Wednesday: The Dodgers sent Class-A Great Lakes pitcher Jonathan Martinez to the Cubs to complete the trade for Barney, who was optioned to Triple-A Albuquerque.

Thursday: On the day of the non-waiver trade deadline, nothing.

Thursday: Okay, not nothing. Two days after getting designated for assignment, Scott Elbert cleared waivers and was outrighted to Triple-A Albuquerque. Elbert accepted the assignment to the minors.

Saturday: Swing man Paul Maholm injured his right knee on Friday night and was placed on the 15-day disabled list a torn ACL. To take his place on the roster, left-hander Paco Rodriguez was recalled from Triple-A Albuquerque.

The Dodgers run the Dante Bichette gauntlet, with their final interleague stretch of the year, a home-and-home with the Angels, followed by three games in Milwaukee. The Dodgers face the teams with the second-best record in both the American and National Leagues this week, so it's a good think Greinke and Kershaw are lined up to pitch twice each.