Joc Pederson on his first AB: 'It was pretty special.'

Share All sharing options for: Joc Pederson on his first AB: 'It was pretty special.'

LOS ANGELES -- That was quite a big league inauguration on Monday night for Dodgers rookie Joc Pederson a. Thrown into the fire with the tying runs on base with two outs in the ninth inning against Nationals closer Rafael Soriano, Pederson battled for six pitches before ultimately striking out looking on a beautiful backdoor slider.

"That's a thing as a little kid you're chasing in a game, and it came in my first at-bat, so I thought it was pretty special," Pederson said. "Unfortunately it didn't go the way I want."

Joc struck out 149 times this year in the minors but he was no slouch at the plate, also setting an Isotopes record with 100 walks. It was a close pitch to take, as Brooks Baseball shows, but a strike nonetheless.

It may have looked like a ball on its way to the plate... 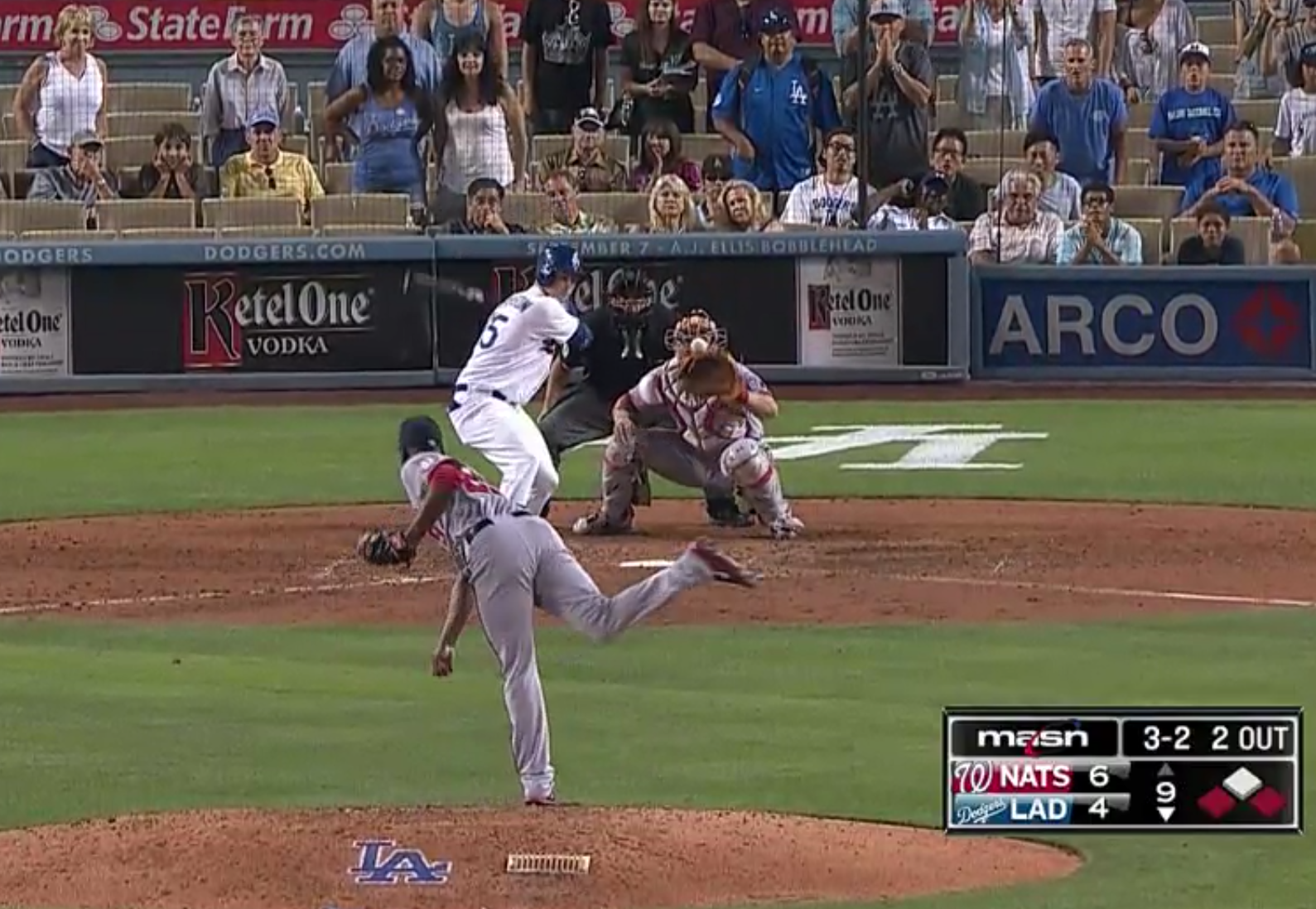 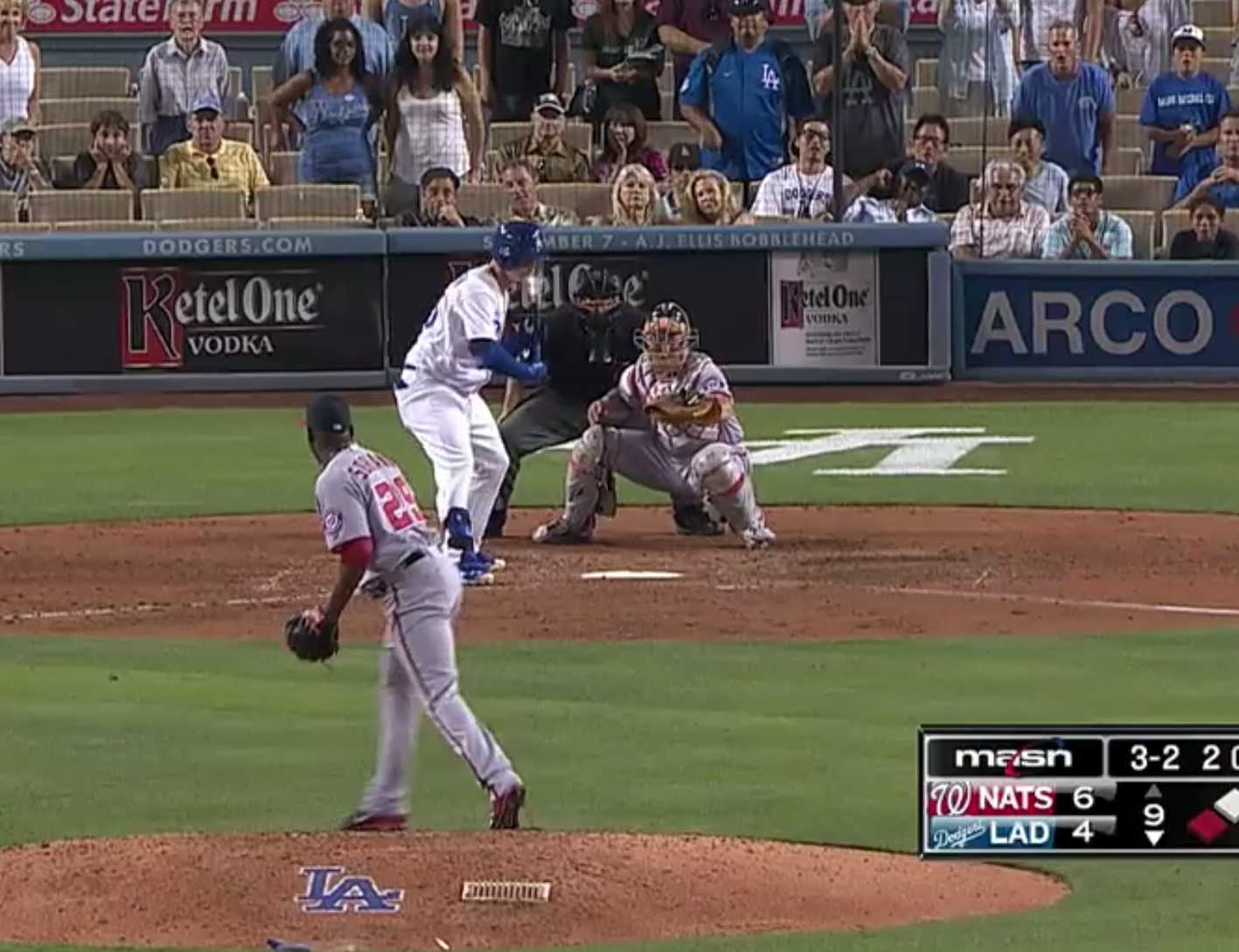 That Pederson was even up in that situation was something, because manager Don Mattingly would have preferred in an ideal situation to let Pederson's first major league at-bat come in a less pressurized situation, just to get the jitters out of the way. But in the ninth there was no better choice to pinch hit for pitcher Yimi Garcia than Pederson.

"We have to try to win the game, and I think Joc's the guy for that right there," Mattingly said. "He's a left-handed hitter who can hit a ball in the gap, score a run."

Crawford preceded Pederson at the plate, pinch hitting for catcher A.J. Ellis. Crawford singled to extend the inning, giving Mattingly two at-bats with the platoon advantage in the ninth with the left-handed Crawford and Pederson facing the right-handed Soriano.

In the seventh, also with two runners on and the tying run at the plate, Mattingly faced a similar decision. He chose to have Ellis bat against Drew Storen, then after Ellis flew out to center Mattingly called on Andre Ethier to pinch hit for pitcher Chris Perez, knowing Matt Williams would counter with the left-handed Matt Thornton.

Mattingly then pinch hit the right-handed Justin Turner for Ethier, gaining the platoon advantage, though Turner struck out to end the inning.

In other words, in a spot he knew his left-handed pinch hitter would get burned, Mattingly chose Ethier over Crawford or Pederson.

That's likely reading too much into the situation, as Mattingly might have been saving Pederson as long as possible until there simply weren't any other viable options.

But the sentiment works, especially on a night when even after a strikeout a throng of reporters surrounded Pederson's locker, while Ethier, whose locker is the next one over, had to wait for Pederson's interview to end before gathering his things.

As for Pederson, even though the result wasn't what he wanted he appreciated the moment of his first major league at-bat.

"It was pretty special. I got a good adrenalin rush," Pederson said. "Everything was there, and I'm looking forward to have more at-bats like that."

Pederson even got words of support from a member of the extended Dodger family.