Share All sharing options for: Dodgers go deep, even when Clayton Kershaw doesn't, to beat Cubs

It wasn't pretty by any means, but Clayton Kershaw picked up his 20th win of the season on Friday afternoon. Backed by four home runs, the Dodgers powered their way to a 14-5 win over the Cubs.

The win moved the Dodgers to three games ahead of the Giants, who play in San Diego on Friday night, and lowered the magic number to clinch the division to seven.

In addition, the Dodgers' magic number to clinch a playoff spot is down to one, meaning they are guaranteed to play at least one game past Sep. 28. A Brewers' loss in Pittsburgh on Friday evening would clinch at least a Wild Card spot for the Dodgers.

Kershaw was fighting his command from the start, and in the first inning allowed a walk, a double and a triple. All three Cubs scored, just the second time this season Kershaw allowed more than two runs in an inning.

But even with that poor beginning to Kershaw's day, the Dodgers never trailed. Because in the top of the first, the Dodgers scored six runs and chased Edwin Jackson after only seven batters and two outs. The big blows were a three-run shot by Matt Kemp - unfettered by wind, unlike Thursday night - and a two-run shot by A.J. Ellis, just his second home run of the season.

But Ellis wasn't done, adding another two-run shot in the third inning, both against reliever Eric Jokisch. The catcher began the day with one home run on the season. But it continued a tradition of sorts of good things for Ellis on Sep. 19: 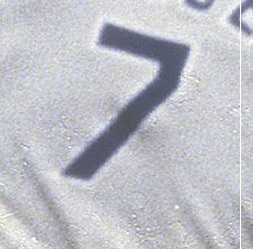 Kershaw plodded his way through five innings, but needed 106 pitches to do it. Six times this year Kershaw lasted eight or nine innings in fewer pitches, and four more times he lasted seven innings.

But after that first inning he didn't allow another run. Kershaw allowed 11 runners to reach base - seven hits, three walks and a hit batter - in his five frames, but he also struck out nine. After his second-worst start of the season, Kershaw's ERA ballooned ... to 1.80.

The offense kept coming even as Kershaw was going, with another six-run rally in the sixth, punctuated by a three-run home run by Yasiel Puig on to Waveland Avenue, over the left field bleachers.

Dee Gordon went 2-for-5 to extend his hitting streak to 12 games, hitting .361 (22-for-61) with 16 runs scored during that span. He also has seven consecutive multi-hit games; the only LA Dodger with a longer streak is Duke Snider, with eight straight games in 1959.

Hanley Ramirez was 2-for-4 with two doubles, giving him 34 on the season. This is the first Dodgers team in franchise history with four players with at least 34 doubles.

The Dodgers turn to Roberto Hernandez in the third game of the series, a Saturday morning (10 a.m. PT) start on FOX. The Cubs will counter with the left-handed Felix Doubront.