Too much Adam LaRoche, too many mistakes in Dodgers' loss to Nationals

51 players, three errors, and three blown saves were crammed into 14 innings on Wednesday afternoon in the Dodgers' longest game of the season.

Share All sharing options for: Too much Adam LaRoche, too many mistakes in Dodgers' loss to Nationals

Adam LaRoche didn't have the decency to start Wednesday's game but he did all he could to end it, lifting the Nationals over the Dodgers 8-5 in an infuriating and exhilarating 14-inning contest on Wednesday afternoon at Dodger Stadium.

At 14 innings and five hours, 34 minutes, Wednesday was the longest game of the season by both innings and time.

An error on Justin Turner, a walk and a wild pitch by Kevin Correia set up LaRoche, who grounded into a force play to drive in the go-ahead run, his fifth RBI of the game for a 6-5 Washington lead. Asdrubal Cabrera followed with a two-run shot to expand the lead.

Extra innings were wild and inexplicable, featuring a swinging hit by pitch by Dee Gordon (a foul ball), Don Mattingly not pinch-running for A.J. Ellis on first or second base, but waiting until he got to third in the 10th, then willingly took the bat out of the hands of Joc Pederson (a sacrifice bunt) and Matt Kemp (knowing an intentional walk would come with first base open) in the 11th to have Drew Butera and Gordon hit with the bases loaded.

The Dodgers, as you might have heard ad nauseam, have not hit well with the bases loaded this season, and in the 10th and 11th innings were 0-for-4 with three strikeouts and a pop out with the bases juiced, killing any potential game-winning rallies.

Brandon League loaded the bases with two hits and a walk in the 12th, and LaRoche made him pay with a two-run single to give Washington a 5-3 lead.

But Carl Crawford answered with a two-run home run with two outs in the bottom of the inning to give the Dodgers new life.

In what seems like ages ago, the Dodgers held a 2-0 lead into the ninth inning, thanks to a two-run home run in the seventh by the red-hot Turner, but the Nationals got to Kenley Jansen in the ninth inning.

Jansen, attempting a four-out save for the fourth time this season, allowed a single in the ninth to Bryce Harper before the pinch-hitter LaRoche took him out to the opposite field in left to tie the game before the stunned, sparse crowd.

One out later Jose Lobaton singled, then pinch-runner Danny Espinosa stole second and scored on a hard single past Adrian Gonzalez at first base by Denard Span.

It was the fifth blown save of the season in 44 attempts for Jansen, and his first since July 30.

But down to their final out in the ninth, with Andre Ethier on first base, it was Turner again at the plate against closer Rafael Soriano. Turner hit a fly ball deep into the right field corner but very playable, only Jayson Werth saw it bounce off his glove, allowing Ethier to score the tying run and helping the Dodgers to extend the game.

The seventh-inning rally didn't come without obstacles for the Dodgers, of course. Hanley Ramirez led off the inning with a hard-hit ball to the gap in left center field, but his double was instead an out that found the glove of the speedy center fielder Span. Crawford followed with a bloop behind first base for a double of his own, but Crawford nearly was out after stumbling between first and second base. 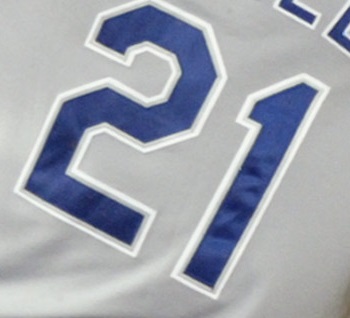 The Giaants also lost, keeping the Dodgers two games up, and lowering the magic number by one. Photo: Getty Images

Then came the hit by pitch that wasn't, an inside pitch that appeared to nearly graze the right elbow pad of Turner. The pitch was called a ball, and upheld upon replay review, leaving Turner at the plate. He slammed a full-count pitch over the wall in straightaway center field, finding a place out of the reach of Span, for a 2-0 Dodgers lead.

The game wouldn't have been scoreless before Turner's heroics without a brilliant starting debut by Carlos Frias, who matched zeroes with Jordan Zimmermann for six innings.

The hard sinker was working well for Frias, getting nine ground ball outs in his six scoreless innings, allowing only three hits and a walk while striking out four. Frias is the first Dodgers pitcher to pitch at least six scoreless innings in his first major league start since Hong-Chih Kuo on Sep. 8, 2006.

The Dodgers have a rare Thursday off at home, on which some players will take part in Clayton Kershaw's ping pong tournament. The club opens a three-game weekend series on Friday night against the Diamondbacks, with Dan Haren starting the opener on a full six days rest. Vidal Nuno is in line to start for Arizona.