Dodgers Week 24: Turning up the power

Share All sharing options for: Dodgers Week 24: Turning up the power

LOS ANGELES -- The Dodgers used a weekend sweep of the Diamondbacks to end the week further ahead in the division (three games) than they were at the start of the week (2½ games) over San Francisco. It was the fourth sweep of Arizona this season by the Dodgers, who beat the Diamondbacks in 15 of their 19 meetings.

The Dodgers also dropped two of three to the Nationals, a close series that was a blown save or perhaps a pinch runner away from falling in the Dodgers' favor. The good news for the Dodgers is that another week is off the schedule and they are not only ahead of the Giants but also in a virtual tie with the Nationals for the best record in the National League.

The bad news is that the Dodgers don't get to face Arizona anymore in 2014.

The starting pitching is healthy and productive, the middle of the lineup is hitting for power even while a pair of young stud outfielders were a combined 4-for-28 (.143). But the end result was four wins in six games and a three-game lead with 19 games left.

Dodger Batter of the Week: With a career-high-tying six RBI on Sunday, Adrian Gonzalez takes the award, narrowly over Matt Kemp. Both hit three home runs, scored four runs and had seven hits. Kemp had the higher OPS but in six fewer plate appearances, and Gonzalez had nine RBI compared to four for Kemp. They combined for three home runs and drove in all seven runs on Sunday.

"Extra good job by Matt and Adrian today," said Zack Greinke. "That's really what it was."

Dodger Pitcher of the Week: For taking his opportunity and running with it, Carlos Frias takes the cake, with eight scoreless innings in two appearances. The 24-year-old in his first major league stint threw six scoreless innings in a spot start against the Nationals allowing only four runners to reach base. Then four days later he retired all six batters he faced in a setup role against Arizona. The week for Frias consisted of three hits, one walk and six strikeouts, and could lead to a bigger role in September and October.

"He may be a guy that helps us in the middle innings," manager Don Mattingly said. "He's a guy with power stuff, with movement. We've been kind of searching to clean those innings up." 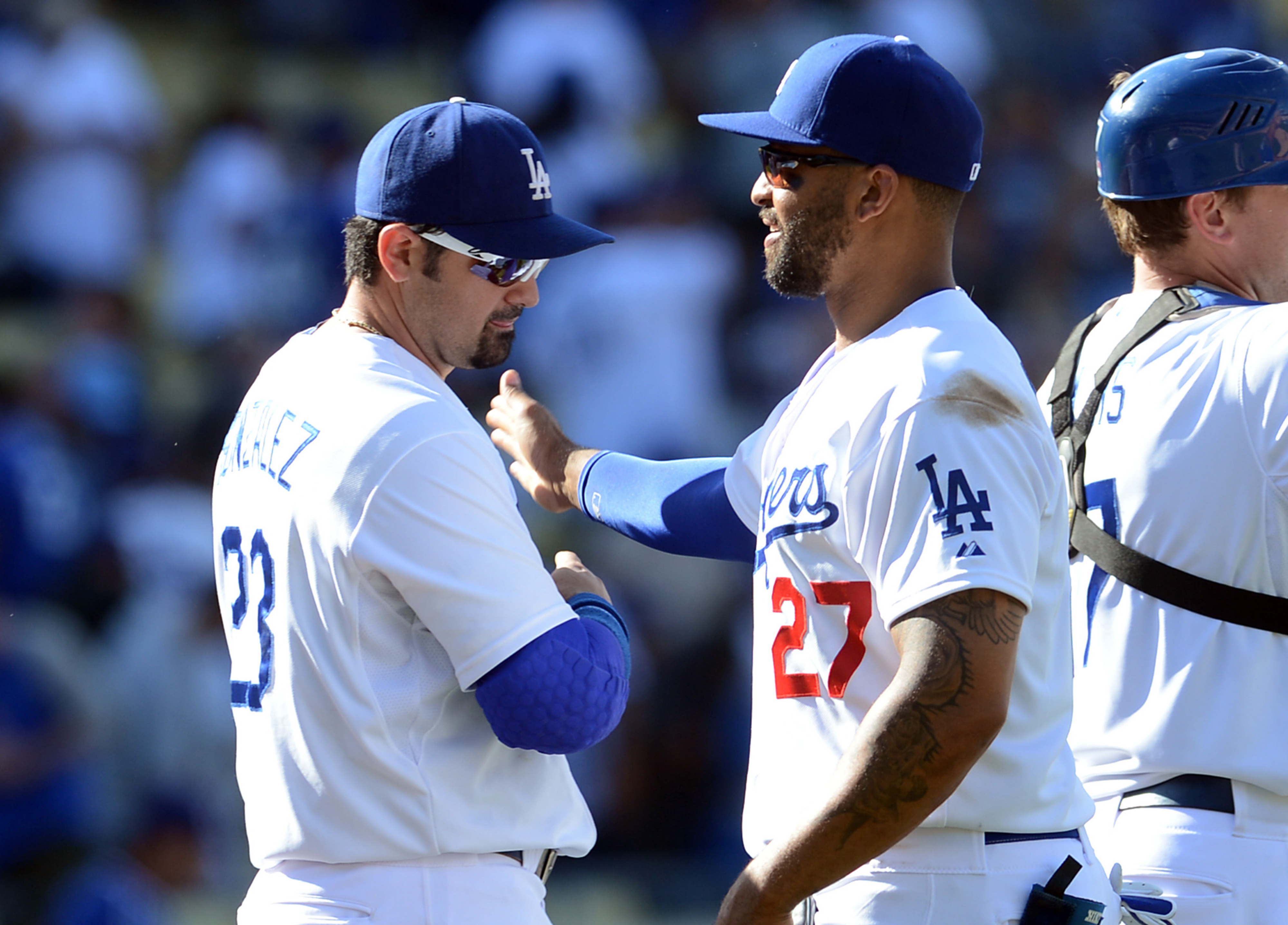 Dodgers were no-hit into the sixth inning, but that was before a pair of three-run home runs by Adrian Gonzalez and a solo shot by Matt Kemp. (Photo: Jayne Kamin-Oncea | USA TODAY Sports).

Monday: On the first day of expanded active roster limits, the Dodgers recalled catcher Tim Federowicz, infielder Alex Guerrero and relief pitcher Yimi Garcia were recalled, and outfielder Joc Pederson had his contract purchased from Triple-A Albuquerque. To make room for Pederson on the 40-man roster, infielder Carlos Triunfel was designated for assignment.

Thursday: After he cleared waivers, Carlos Triunfel was outrighted to Triple-A Albuquerque.

Saturday: The club purchased the contract of outfielder Roger Bernadina and transferred pitcher Josh Beckett from the 15-day to the 60-day disabled list.

The Dodgers run the Chris Brown gauntlet, finishing up a homestand with three games against the Padres, followed by a trip to San Francisco for the first of two remaining showdowns with the Giants.