LOS ANGELES -- Clayton Kershaw pitched another gem and was backed by an offensive bonanza in the Dodgers' 9-4 win over the Padres on Monday night at Dodger Stadium.

The victory gave the Dodgers a four-game winning streak, their second-longest of the season, and pushed their lead over San Francisco in the National League West to 3½ games.

The Dodgers gave Kershaw early support. Dee Gordon singled to open the first inning then stole second base, his 59th steal of the year, and scored on a single by Hanley Ramirez, one of a season-high-tying four hits on the night for Ramirez.

Juan Uribe took Odrisamer Despaigne deep the other way, just inside the right field foul pole in the second inning for a quick 2-0 cushion.

Kershaw, as he does, retired the first nine batters of the game, the sixth time in 24 starts this season he took a no-hitter through at least three innings.

Yangervis Solarte broke up any thoughts of a second Kershaw no-hitter with a leadoff single in the fourth inning, then one out later advanced on a walk and scored on an opposite-field single to right field by catcher Rene Rivera to cut the Dodgers' lead to 2-1. 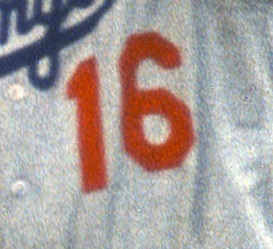 Kershaw was able to wiggle out of the jam by striking out Yasmani Grandal and getting Tommy Medica to pop out to first base. Kershaw shut San Diego down after that, though he ended up not needing to.

The Dodgers answered the Padres' run in the top of the fourth with two more of their own in the bottom of the inning, including an RBI single by Yasiel Puig, a sharp line drive to center field that gave Puig his first RBI in 17 games, since Aug. 15.

An RBI double by Matt Kemp and a three-run home run by Carl Crawford in the fifth inning blew the game wide open. The hit for Kemp extended his hitting streak to 14 games, during which he is hitting .345 (19-for-55) with 13 RBI.

Kershaw ended his night allowing one earned run on three hits, just like his other two starts against the Padres this season. He walked two and struck out eight in his eight innings, pulling to within five of Stephen Strasburg for the National League lead.

With runners on first and second base in the sixth inning Rivera flew out to Puig in short center field, then chaos ensued. Puig threw to first base trying for a double play but the throw got away, then A.J. Ellis, backing up the play, threw wildly to second base, then Ramirez, backing up in short center field threw home wildly.  After the third wild throw, Ellis threw home to Kershaw, who wisely moved out of harm's way as Liriano slid in.

"I didn't know where the play was, that's why I jumped out of the way. I thought I might have been right on top of it," Kershaw said. "I felt like we could have had a bunch of outs. We'll probably be on 'Not Top 10' in a while."

The end result was three throwing errors on one play, and two unearned runs.

"That one just got crazy. It's not going to overshadow because we won, but if you lose it could have," manager Don Mattingly said. "I did look up and see a full moon."

Kershaw was pulled after 89 pitches but still lasted eight innings for his sixth straight start, joining Hideo Nomo (June 1995) as the only Dodgers starter in the last 26 years to do so.

For the first time since joining a major league roster, Joc Pederson did not play. Ending his consecutive games played streak at six, just 2,676 games shy of Cal Ripken's record.