Zack Greinke and the fateful fastball

Share All sharing options for: Zack Greinke and the fateful fastball

In the sixth inning of the National League Division Series elimination game between the Dodgers and the Mets, Zack Greinke threw a full-count fastball to Daniel Murphy. The rest, as they lamentably say, was history:

Murphy’s home run proved to be the series-clinching hit, and as with most playoff heroics, it came under unlikely circumstances. In three distinct ways -- the pitch delivery, selection, and location -- the fastball represented a departure from Greinke’s typical approach. It was a strategically sound move that, unfortunately, fell on the wrong side of Dodger history.

Even though the bases were empty, Greinke opted to throw from the stretch. It appeared to be designed to give Murphy "a different look," as TBS analyst Ron Darling noted. While some observers believe that such tactics adversely affect pitch quality, Mike Fast actually found no evidence to support this hypothesis when he studied it in 2010. Furthermore, as Rob Neyer pointed out, Greinke had succeeded in doing the same thing just five innings earlier.

Of course, there are many other factors that change between these two types of situations, but it’s doubtful that pitch delivery has had a measurable impact on Greinke. The stretch didn’t seem to bring any extra risk in pursuit of a slight edge against Murphy.

Beyond the delivery, Greinke sought to mix things up by electing to use his fastball in the first place. That might sound odd since pitchers commonly favor this pitch on full counts, but given his recent tendencies, it actually signified a somewhat different twist.

In 2015, Greinke threw his fastball just 50 percent of the time -- the lowest usage rate of his career. He gradually used it with less frequency during the season, going from 53 percent in the first half to 47 percent in the second half.

This trend was also evident against left-handed hitters like Murphy. Greinke’s 2015 fastball usage against them ended up at 46 percent, after dropping from 51 percent to 41 percent between the first and second halves. In his preceding matchups with the Mets, it was even more pronounced: 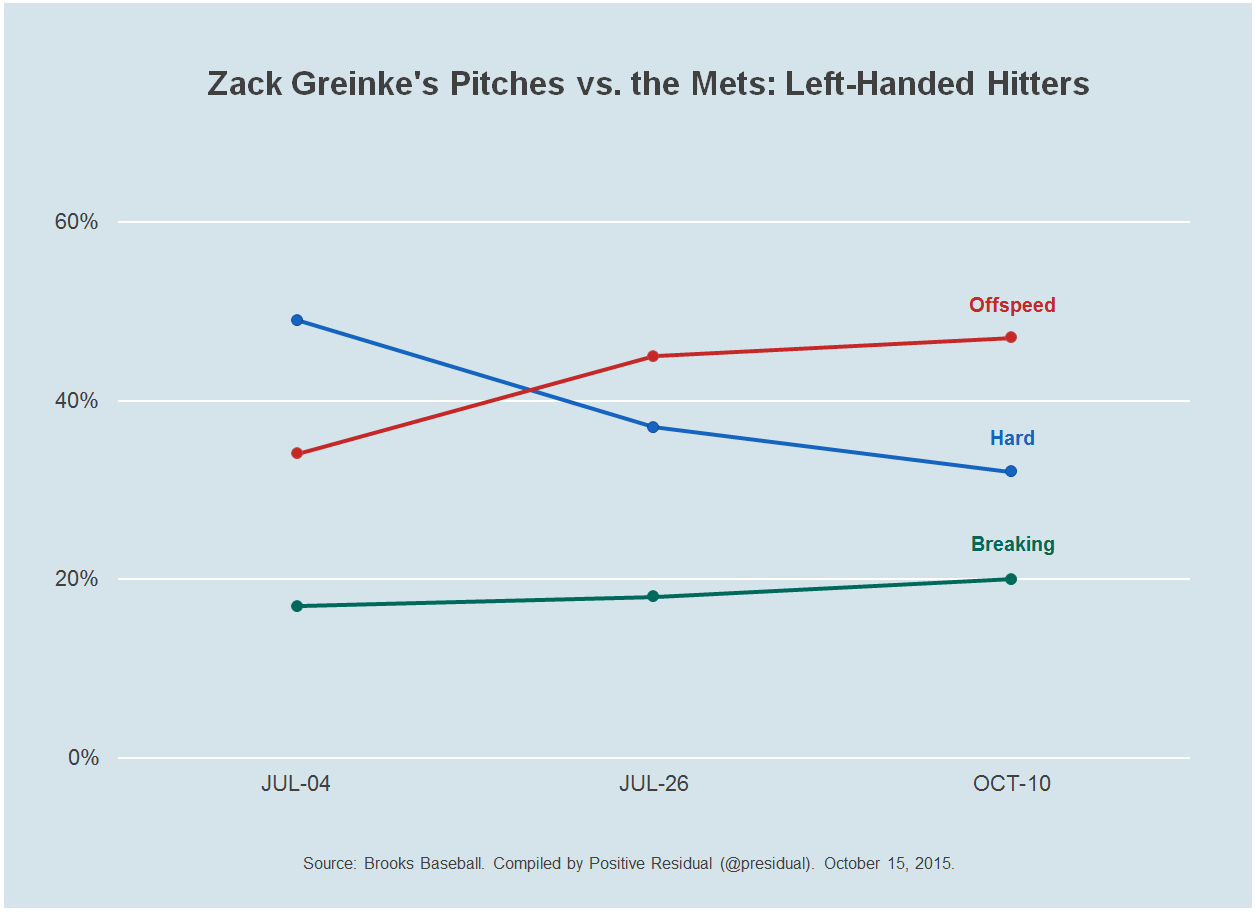 July 26 and October 10 saw the two lowest fastball usage rates for Greinke this year. Prior to the elimination game, he shed light on his approach -- and why he might need to modify it (via Jon Weisman at Dodgers Insider):

"But, you’ve got to probably make somewhat of an adjustment, because you can’t just keep doing the same thing to a team, or else they’ll make the adjustment and get a couple runs and it will be too late. So I have to find a way to mix more fastballs in against them this next time probably."

Greinke had been deliberately attacking left-handed hitters with more off-speed pitches, yielding just a .181 batting average and .194 slugging percentage. His fastballs had been generating slightly higher rates, though still within the same level of effectiveness. In fact, according to Jeff Sullivan’s analysis of Greinke’s entire season, there were minimal differences in value between his changeup, fastball, and slider.

Against Murphy, pitch quality didn't seem to be compromised in pursuit of variation.

Based on where catcher Yasmani Grandal was positioned, it was clear that Greinke intended to throw the fastball low and inside. This decision was yet another wrinkle to his usual mode of attack.

In his career against left-handed hitters, Greinke has pitched to the lower inside quadrant just 12.5 percent of the time. This year, it was down to 7.5 percent. 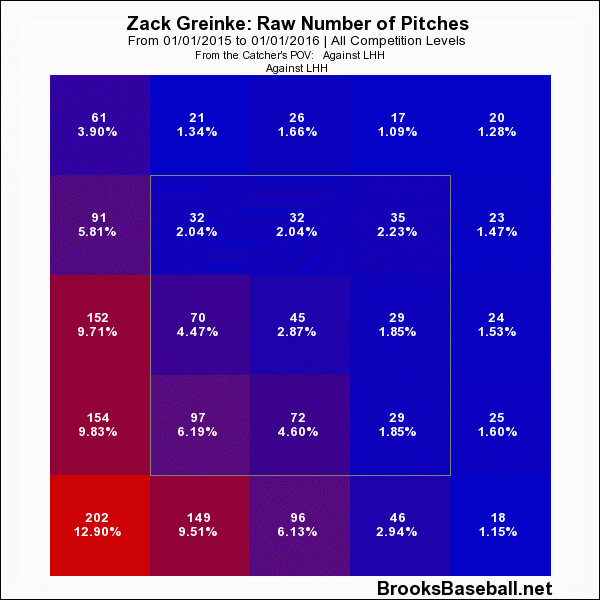 In a Fangraphs interview with Eno Sarris, Greinke shared his broader observations on inside and outside pitches:

Notwithstanding his preference for outside pitches, Greinke sought to locate his fastball inside as a response to Murphy’s previous successes (via Eric Avakian at Dodgers Nation):

"He was taking really good swings and really good takes. I was trying to do something different," Greinke explained after the loss.

The adjustment was one the 31-year-old right-hander did previously to better results. "I did [it] earlier on [Lucas] Duda and it worked…."

The Duda and Murphy at-bats were indeed similar in that they both saw fastballs from the stretch on a full count. But, whereas Duda swung and missed on a 91 MPH sinker away, Murphy received a 93 MPH four-seamer inside:

Greinke aimed for the inside corner, but his fastball drifted four inches toward the right-handed batter’s box. By the time it reached the plate, it was pretty close to the lower middle part of the zone. If it had exhibited Greinke’s standard -1.7-inch horizontal movement and gone further toward the corner, perhaps the ball wouldn’t have been hit quite as hard, in accordance with his observations. Or perhaps it wouldn’t have mattered at all, given how well Murphy had been hitting.

At this stage, we might be tempted to start second-guessing. Why didn't Greinke just stick to the same formula that had produced his MLB-leading 1.66 ERA? Why didn't he veer in a vastly different direction after Murphy fouled off the previous pitch hard? Why did he overthink his approach?

But, while it's natural to wonder what could have been, it's even more important to recognize that the rationales were defensible. The full-count fastball was Greinke's 193rd pitch to the Mets within a span of five days. Such exposure meant that adjustments would be at a premium. Besides, if anyone deserves the benefit of the doubt, it's Greinke, who studies the game unlike any other pitcher.

At the end of the day, we simply witnessed a Cy Young candidate with impeccable command miss his spot in a crucial situation. A sublime athlete turned human right before our eyes. It's unfortunate that it happened in Game 5, but no more so than the uncovered base or the eight stranded runners were. There's no reason for regret. It's just baseball.