A deeper look at Dave Martinez as Dodgers' managerial candidate

Share All sharing options for: A deeper look at Dave Martinez as Dodgers' managerial candidate

Dodgers president of baseball operations Andrew Friedman said last week he planned to "definitely" have a manager in place by baseball's winter meetings, which run from Dec. 7-10 in Nashville.

We briefly discussed a group of potential candidates last week, and also discussed what the Dodgers front office would look for in their next skipper.

The tie to the Dodgers for Martinez is Friedman, who hired him as a spring training instructor in 2006. After two seasons with that job, Martinez became the bench coach in Tampa Bay under manager Joe Maddon. Martinez also oversaw the Rays' baserunning and bunting.

The Rays went to the World Series in Martinez's first year in the dugout in 2008, and made four postseason appearances in seven years. Martinez followed Maddon to Chicago after the 2014 season, so that duo saw the playoffs in five of eight years working together.

"For me, there’s no question that I’m ready [to be a manager]," Martinez told Gordon Wittenmeyer of the Chicago Sun-Times in September. "It’s just getting the right opportunity."

Martinez, 51, played for 16 major league seasons as an outfielder for nine different teams. He has no managerial experience in the majors or minors, though his eight seasons as bench coach has Maddon thinking Martinez is ready for a step up.

"When he comes to the ballpark every day, he walks in the door as though he’s going to manage the game," Maddon told Patrick Mooney of CSN Chicago in October.

"He understands all the numbers that are out there," Maddon said. "He understands people. He’s really good at tough conversations. He’s very straight up, straightforward and upfront.

"That’s really vital. You have to have those ‘Godfather’ days, man. Sometimes you just got be very blunt and honest with somebody in order to get your point across. He’s got all that.

"He’s absolutely ready. Some team’s going to get lucky."

"If the opportunity arises, I'm ready. I've been ready. I've been close the last couple interviews. I think it'll happen soon," Martinez told Adam Berry of MLB.com in September 2014. "I learned from being [in Tampa Bay] over the years that it takes a whole organization to become a championship team. ... I want to build relationship like that wherever I go -- with the GM, with the radio announcers, with media, with ownership, with fans, players, all that stuff. It all matters."

"I don’t think fluency with that stuff is as necessary as just openness to ideas," Zaidi said. "We're looking for someone that can lead." 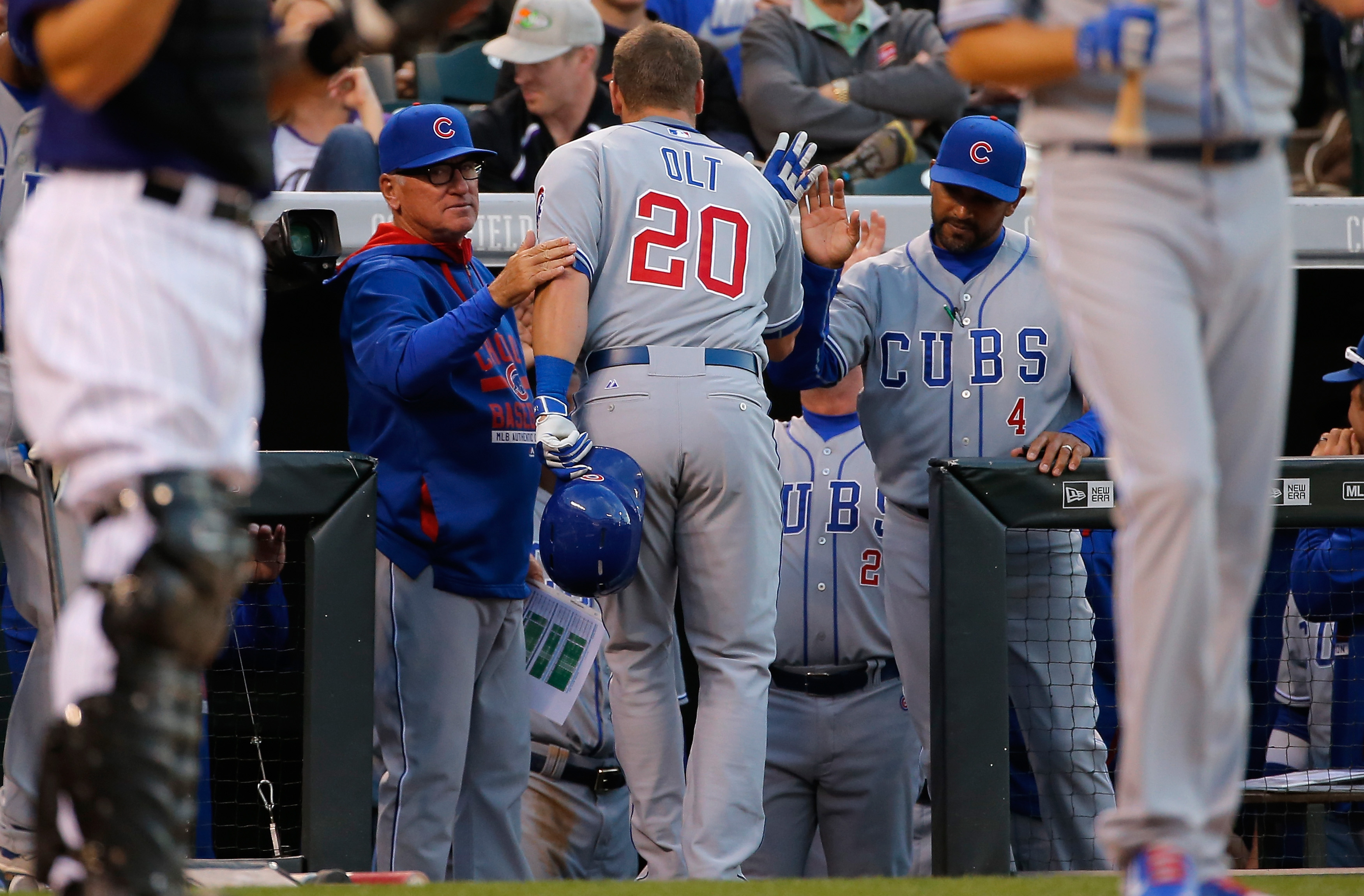 Dave Martinez (No. 4, right) was bench coach with the Cubs in 2015 (Photo: Doug Pensinger | Getty Images)

Martinez seems to fit the bill, and was endorsed by several Rays last November to succeed Maddon, with support from Joel Peralta, Ben Zobrist, Evan Longoria and Alex Cobb, as well as third base coach Tom Foley. From Marc Topkin of the Tampa Bay Times:

"I'm really hoping they sign Davey and give him a shot," reliever Joel Peralta said. "Not only did he learn a lot from Joe, he knows the Rays organization, he knows the Rays way. Everybody knows him, everybody's comfortable around him. He's a great guy, and I believe he can be a great manager.

"Joe let everyone do his own thing and play hard, and I think Davey would be the same way. I know every player is going to want to play hard for him."

So, too, has third-base coach Tom Foley, a former big-league teammate and longtime friend.

"I think he's ready," Foley said. "He sat next to Joe, and I know how he operated. He made sure to tell Joe what was on his mind, and if Joe agreed, fine, and if not, he would do what he wanted. They communicated great together. Davey is a strong presence in the clubhouse, well-respected by the staff and players. … He's a good fit."

"I still like Dave Martinez at the top of the list," Zobrist emailed. "I think Dave is ready for the opportunity to see how he can do. He has always been 100 percent into the games mentally and I know he has the baseball acumen to manage in game situations."

Cobb said Martinez "would be a great manager. He has a great relationship with all the players. Can relate to us and knows how the culture has been here." Longoria called Martinez "kind of the obvious pick" on MLB Network, also noting the continuity he would provide.

The job ultimately went to Kevin Cash, after which Martinez resigned in Tampa Bay and followed Maddon to Chicago.

The Dodgers potentially have several coaching spots to fill, but It's hard to see Martinez leaving Chicago for anything another than a managerial job. His history with Friedman, along with his bench coach experience, will be Martinez's strongest assets in potentially joining the Dodgers.

Communication will be paramount for the Dodgers' next manager, both with the front office as well as with the players and the coaching staff. Martinez himself alluded to this in an interview with David Lauria at FanGraphs in June 2012, when asked what type of bench coach he might prefer as manager:

I don’t want somebody to sit there and say, "Yes sir, yes sir,." I’ll want a guy who is very opinionated and sees a game with his own eyes and not mine. I’ll want a guy who is ready for all situations and knows the game. I want him to know what’s going to happen before it happens. That’s what I try to do and it’s what Joe expects from me. When something happens, I want to be ready with an answer.

When that opportunity arises for me — depending on the team and what they want — I might end up wanting an older guy, or it might be a younger guy. What’s important is that I want somebody who understands me and is very opinionated. I’ll want somebody who sees the game with his own eyes.