To borrow from the immortal Yogi Berra, it must feel like "déjà vu all over again" for the Dodgers. They’re entering the National League Division Series for the third consecutive year, and their playoff berth is once again coming with questions about the bullpen’s reliability. The concerns are certainly warranted. Yet there’s a case to be made that the current reliever corps has a better chance of contributing to postseason success than its recent predecessors did.

At first blush, this statement might seem like a stretch. Dodger relievers had the 12th highest ERA in MLB at 3.91. After adjusting for park and league factors, this figure translated into an even less impressive 104 ERA-, which was comparable to last year’s 109 but a step back from the previous year’s 97.

Advanced statistics tell a similar story. When we consider every situation (including inherited runners and outs) that Dodger relievers encountered throughout their 2015 campaign, we see that they were 18 runs worse than average. They saw a sizable drop from their -5 total in 2014 and an even steeper decline from their +7 result in 2013. Bottom-line outcomes ostensibly deteriorated.

But, like other context-dependent metrics, these "RE24" numbers attribute defensive credit entirely to pitchers, making it difficult to ascertain how much of the three-year dip actually belongs to the bullpen. They’re also unreliable predictors of future performance. If we focus instead on factors within a pitcher’s control, we find that the 2015 Dodger relievers are less of a liability than their predecessors were. In some cases, they’re even potentially value-added to the playoff run.

The following table, derived from Fangraphs, shows us why:

In the previous two years, Dodger relievers had FIPs above 3.50, placing them at or marginally better than league average. This year, they finished at 3.43, which ranked fifth in the majors. They made similar progress in xFIP, and their 4.5 Wins Above Replacement (tied for eighth with the Cardinals) was the club’s highest since 2009.

How did they produce these results? As discussed in August, Dodger relievers had a penchant for attacking the strike zone:

Whereas Dodger relievers posted above-average strikeout rates in 2013 and 2014, they took a step forward by pacing all National League bullpens at 26.1 percent this year. Simultaneously, they issued fewer bases on balls, lowering their walk rate by roughly two percentage points. In other words, they did a much better job of limiting opponents’ chances to put the ball in play and draw free passes--improvements that can be traced to their NL-best 12.3 swinging-strike and 47.3 strike-zone rates.

At times, this latter feat appeared to backfire. Dodger relievers allowed 51 home runs, which marked a notable increase from the previous two years in both absolute and percentage terms. But even their 2.6 HR rate should be kept in perspective because it still matched the league average. Although the trend was inauspicious, it hardly spiraled out of control.

Nevertheless, the home runs hinted at a broader concern about batted balls during those moments when the bullpen failed to get a True Outcome. Dodger relievers had the lowest ground ball rate (42.8 percent) and the highest fly ball rate (37.2 percent) in the league. This GB/FB ratio, along with opponents’ tendencies to make hard contact against them, suggested that there might be more to the .317 BABIP than just bad luck.

On an encouraging note, Dodger relievers saw their results improve as the season drew to a close. Their ground ball rate climbed by about seven percentage points after the All-Star break, led by some key pitchers who seemingly reverted toward their means. Between the first and second halves of the year, JP Howell went up by 10, Pedro Baez by nine, Kenley Jansen by eight, and Yimi Garcia by five percentage points. As is the case with most bullpen data, small sample sizes were at play. But the numbers moved in alignment with career averages and, if nothing else, simply indicated that the circumstances were less dire than they looked.

Overall, perhaps the most important takeaway relates to bullpen composition. While 21 different pitchers made relief appearances in 2015, only about a third of them will make the postseason roster, with just a select few logging significant innings. So the aggregate figures above may be understating the bullpen’s potential.

If, for example, the Dodgers go with Baez, Garcia, J.P. Howell, and Jansen, as well as Chris Hatcher, Luis Avilan, and Juan Nicasio, the numbers would shape up this way: 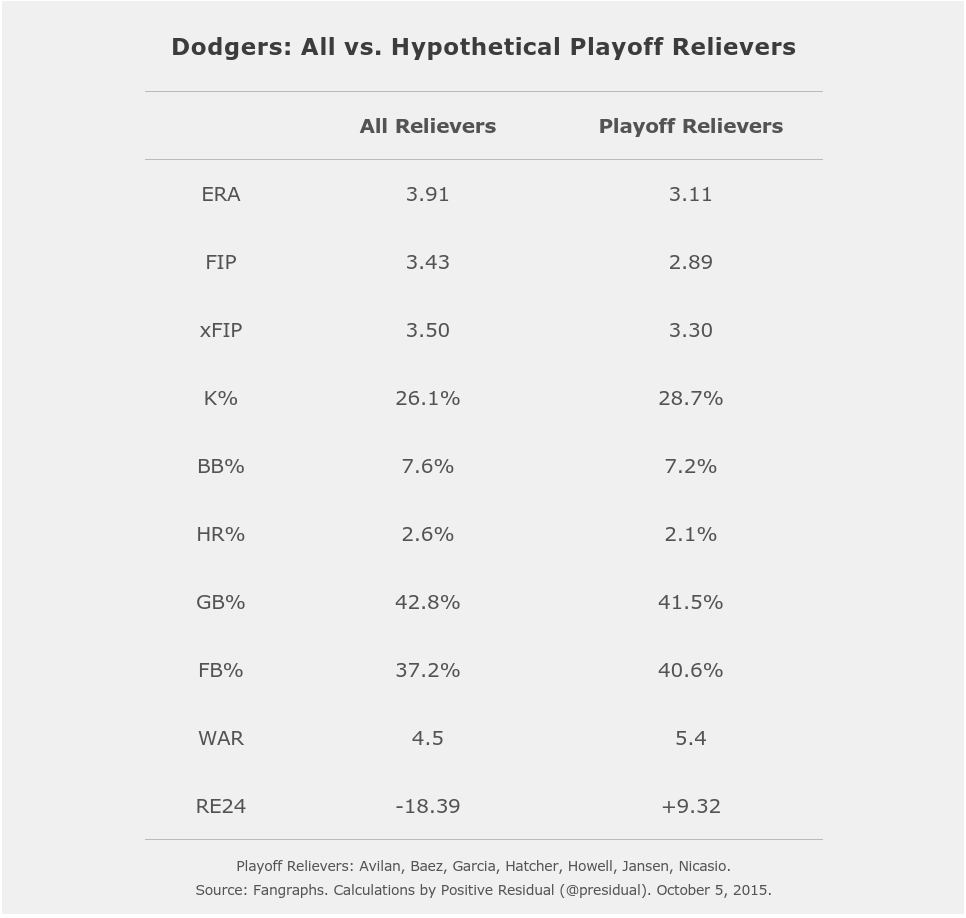 As expected, this hypothetical group (responsible for two-thirds of the bullpen’s total innings) would be even more formidable than the rotating cast of regular-season relievers. It’s not necessarily a lock for postseason success; no roster ever comes with guarantees. But it does cement the idea that the Dodger relief corps is in a better place than its predecessors were--despite many lingering doubts