Share All sharing options for: Dodgers vs. Mets: Their regular season meetings

LOS ANGELES -- If anything, the seven games between the Dodgers and Mets during 2015 showed us just how long a baseball season can be. There are big differences in the teams now and when they played a pair of series in July.

David Wright was hurt in July, and Corey Seager was in Triple-A Oklahoma City. Yoenis Cespedes was in Detroit, Addison Reed was in Arizona, Tyler Clippard was in Oakland, and Chase Utley was in Philadelphia. Chris Hatcher was on the disabled list, and Justin Ruggiano was with Triple-A Tacoma.

So take these games with a grain of salt as we look back at the seven games between Los Angeles and New York.

Clayton Kershaw and Noah Syndergaard each allowed a run, and the Mets scratched together a run against Kenley Jansen in the ninth with a fly ball double, an error on Jansen and a sacrifice fly providing the winning margin.

Zack Greinke pitched seven scoreless innings to extend his scoreless streak to 27⅔ innings, a streak that would last two more scoreless starts after this. Matt Harvey walked a career-high five in five innings and allowed three runs, and spent his postgame complaining about New York's six-man rotation before changing his tune two months later when botching the revelation of his post-surgery innings limit.

Steven Matz pitched six scoreless innings with eight strikeouts in just his second major league start, and even drove in a run with a ground out at the plate. 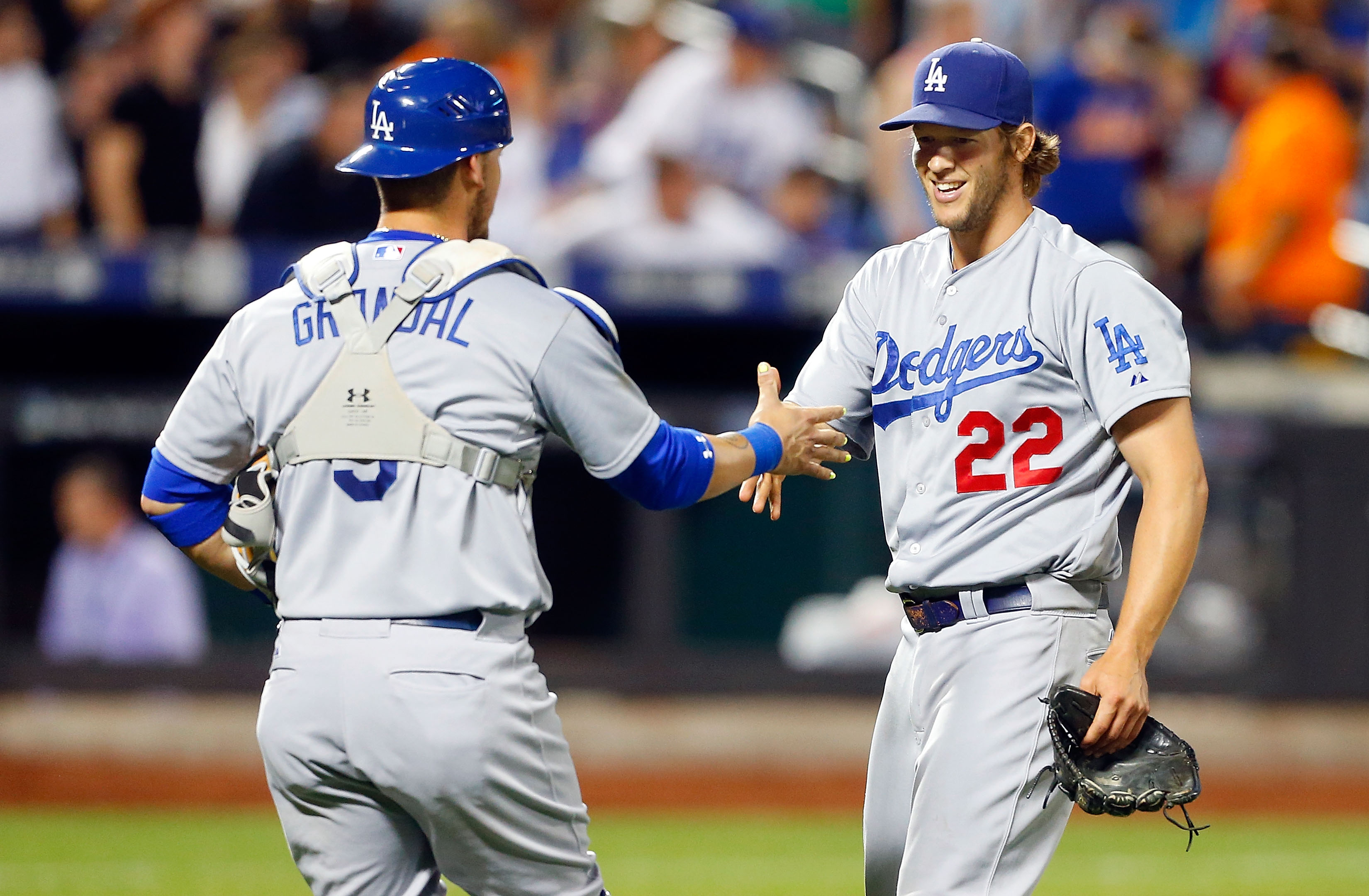 Kershaw struck out 11 in a three-hit shutout at Citi Field on July 23.

Kershaw had a perfect game going until Curtis Granderson singled to open the seventh inning, settling for a three-hit shutout with 11 strikeouts. But to give you an idea of how different the Mets were back then, John Mayberry (hitting .170/.235/.330) batted cleanup and Eric Campbell (.179/.305/.283) batted fifth. Mayberry was released a week later, and Campbell started five times in the Mets' final 66 games.

The Dodgers scored six runs in three innings against a distracted Jonathon Niese, whose wife was nine months pregnant and would give birth later that night. Ian Thomas struck out five in his five innings in a spot start, picking up his second major league win, and first as a Dodger.

Four weeks after general manager Sandy Alderson termed New York as "Panic City," the Mets were energized with the acquisitions of Kelly Johnson and Juan Uribe, two average-ish players but both upgrades over the Mayberry/Campbell-type lineups that permeated much of the early season. Michael Conforto got four hits in his second big league game, and Zach Lee in his major league debut got bombed by the Mets.

Jacob deGrom pitched scoreless baseball into the eighth inning, striking out eight. Greinke allowed two runs in seven innings, the first runs he allowed in 43 days. The Dodgers rallied to tie the game in the ninth against Jeurys Familia, but that was answered in the 10th inning with a Mets rally punctuated by a booming Uribe double off the center field wall for a walk-off win.

So there you have it. Four Mets wins, three Dodgers wins, and two teams with many new looks in October.