The Dodgers and Mets meet for the third time in the postseason, with Los Angeles prevailing in the 1988 NLCS and New York capturing the 2006 NLDS.

Let's get it on

What we've learned this week is that, my goodness, four days without a game is a long time. It seems like forever ago that the regular season ended, which makes me wonder why people seemed so worried about how the Dodgers finished their regular season, when time and time again it has shown not to matter.

But the Dodgers did end up winning their final four games of the season, helping them to secure home field advantage for the series. The Mets were a juggernaut in the final two months, going 37-22 after Aug. 1. But even they struggled down the stretch, dropping five straight games in the season's final week, and only scoring two runs in their final four games.

But none of that really matters now, on the day of the start of the National League Division Series. What matters now is how these teams play going forward.

"You just want your team to play desperate," manager Don Mattingly said. "You want to have your club just playing, and being aggressive, really just being loose as much as you can.

"You're not catching a lot of guys saying 'Well I want to be the guy.' This is a time to know your roles and try to win a game. It can't be about who's the guy or who's the star. It's did we win or not?" 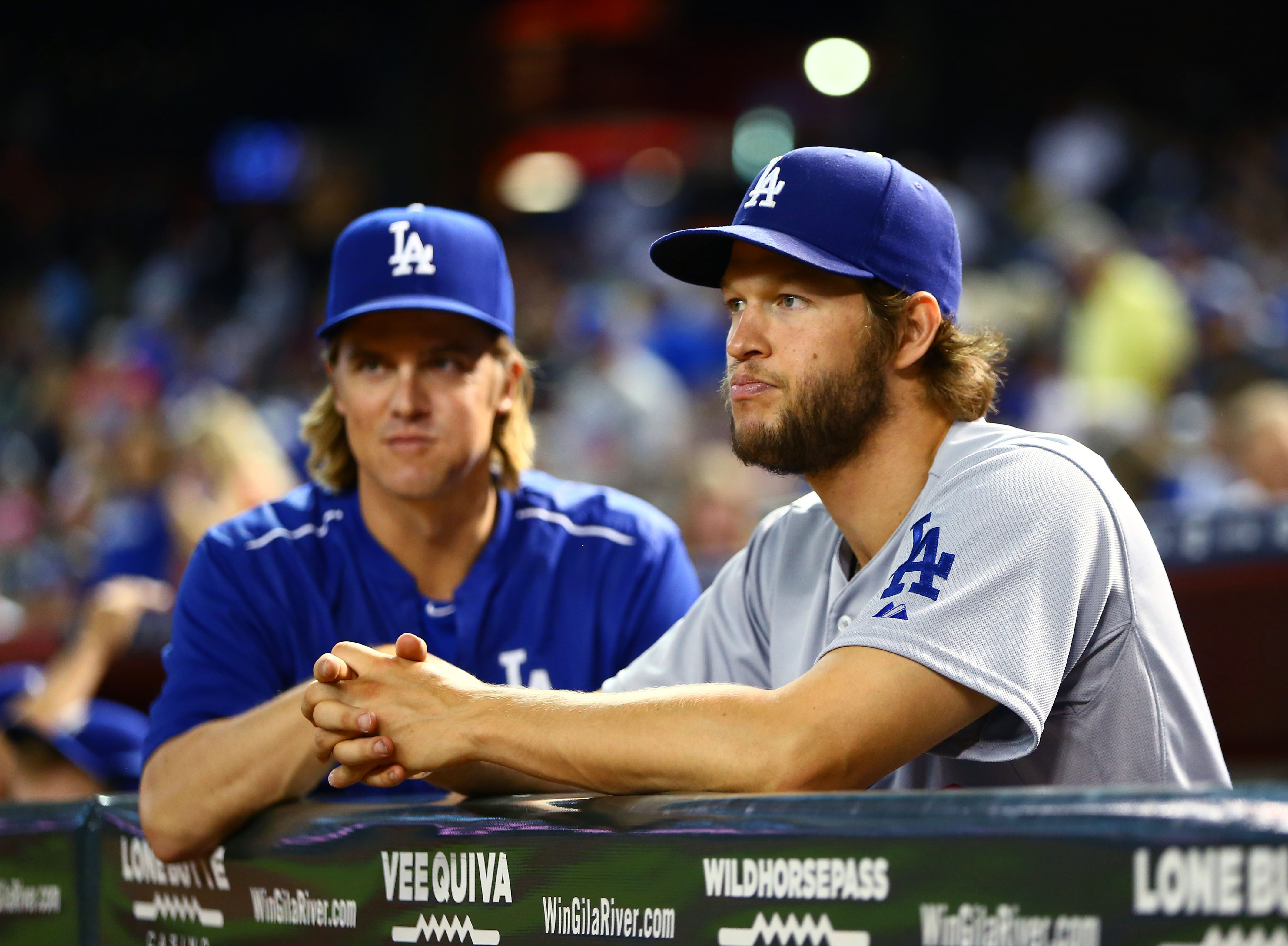 The Dodgers will go as far this postseason as Clayton Kershaw and Zack Greinke take them (Mark J. Rebilas | USA Today Sports)

The name of the game in this series is the starting pitching, with the Dodgers riding the dynamic duo of Clayton Kershaw and Zack Greinke, and the Mets sporting one of the best young staffs in the game, with the quartet of Jacob deGrom, Noah Syndergaard, Matt Harvey and Steven Matz all due to make an impact on the NLDS. The oldest of the New York four is deGrom, at 27.

Kershaw, Greinke and Brett Anderson combined for a 2.41 ERA in 96 starts, with 617 strikeouts in 635⅔ innings.

"They're pitchers who throw the ball hard but for the most part we've swung the bat well against them," Adrian Gonzalez said of the Mets' staff. "It's not like we have to do something completely different. Just make sure we swing at strikes."

Kenley Jansen had a typically excellent season in 2015, putting up a 2.41 ERA and 2.14 FIP, with a 40-percent strikeout rate and a career-best four-percent walk rate. Chris Hatcher took over the eighth inning, and since returning from the disabled list in mid-August put up a 1.31 ERA with a 32.5-percent strikeout rate in 22 appearances. The two key cogs in what could make he LA bullpen a strength in October.

Jeurys Familia saved 43 games with a 1.85 ERA in his 76 games, and struck out 86 in 78 innings, a 28-percent strikeout rate. Both primary setup men came in midseason trades. Tyler Clippard will pitch the eighth, and weirdly the right-hander has held left-handed batters to hitting just .137/.231/.237 against him all season. Addison Reed came over from Arizona on Aug. 30, and put up a 1.17 ERA in 17 games with the Mets, with 17 strikeouts in 15⅓ innings.

Jonathon Niese is the only left-handed pitcher in the Mets' pen, and fellow starter Bartolo Colon will also be used in a relief role in this series.

Adrian Gonzalez battled a back injury over the season's final two weeks, but his problems ran deeper than that. Since Aug. 1, Gonzalez hit .238/.316/.371 with seven home runs in 55 games. But he said Thursday he felt he was improving in time for the series.

"For the most part my back didn't allow me to do exactly what I wanted to do, but overall I feel like I'll be ready come tomorrow," Gonzalez said. "I was just being a little more hesitant, not being able to let it go enough, not being able to take a full swing. I was more mechanical."

Mets third baseman David Wright missed 115 games this season with chronic back issues, but since returning has hit .277/.381/.437 with four home runs and seven doubles in 30 games. Mattingly, who saw his career cut short by back injuries, reached out to offer Wright support and advice, though on Thursday Mattingly was less philanthropic.

"At this moment, I don't have a lot of sympathy for him," Mattingly quipped.

Yoenis Cespedes was a magnificent trade deadline acquisition for New York, hitting .287/.337/.604 with 17 home runs in 57 games. The Dodgers hope to get their own Cuban susperstar back on track after he missed 34 games with a strained right hamstring; Yasiel Puig will be on the roster, though given that he is still rusty his role might be limited to more reserve duty.

Yasmani Grandal and A.J. Ellis formed a dynamic duo behind the plate, though Grandal on offense has been mostly neutralized by left shoulder inflammation since August, finishing his season in a 4-for-84 slump, though with 19 walks. Expect both catchers to play in the series.

The Dodgers have arguably their best bench in recent years, which comes as a byproduct of the front office building a deep team. The NLDS bench will have three players — Puig, Joc Pederson and Jimmy Rollins — who were opening day starters this year, plus veteran All-Star Chase Utley, lefty masher Justin Ruggiano, plus whichever catcher isn't starting that day.

"Our mix of guys is pretty balanced as it is so I don't think we would skew it that far because you always have matchups later in the game," general manager Farhan Zaidi said. "Our objective is to have good balance both ways."

The Mets will use infielders Kelly Johnson and Wilmer Flores, plus outfielders Michael Conforto, Juan Lagares and Kirk Nieuwenhuis. 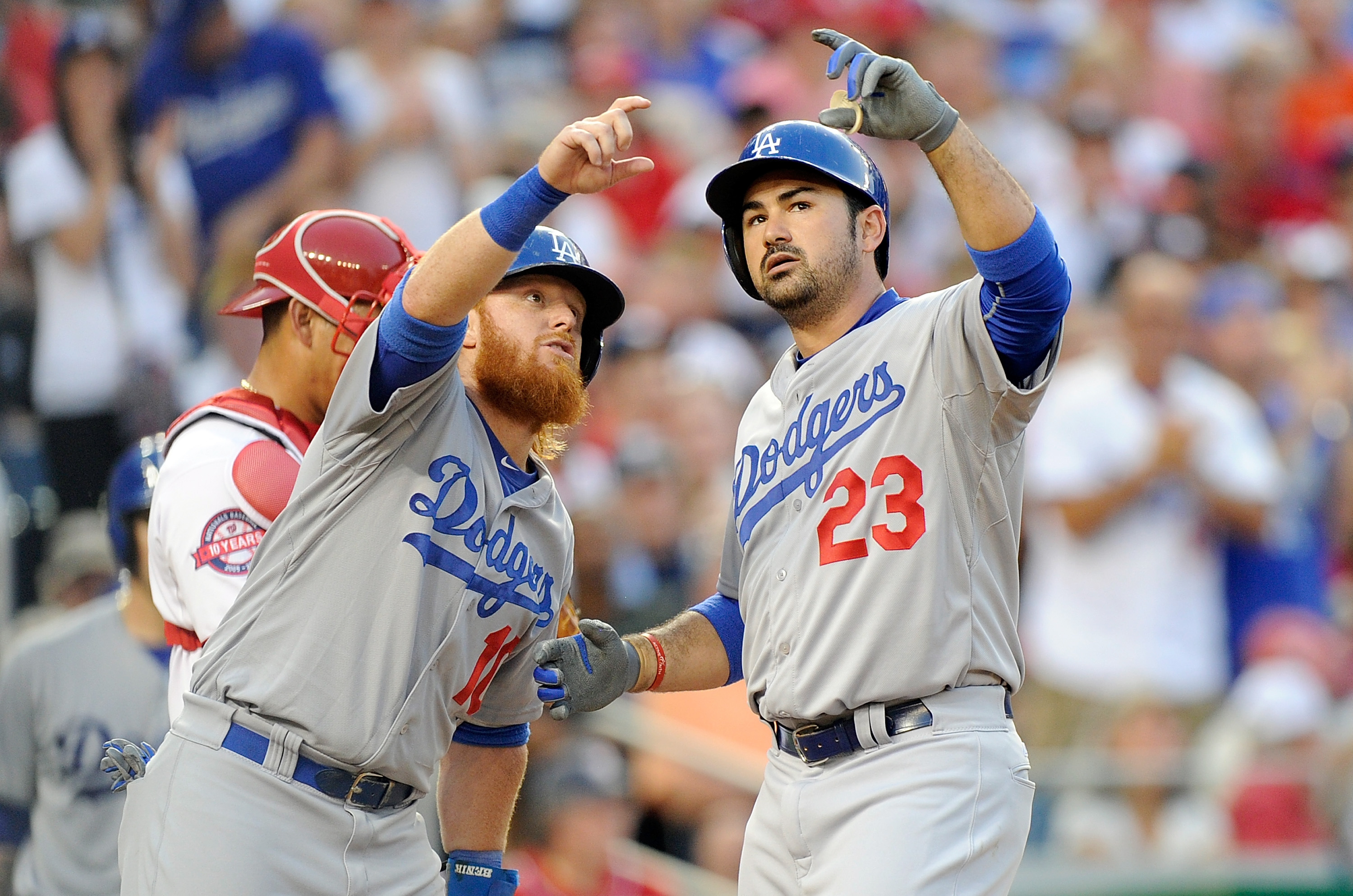 The age of Corey Seager, who will be the first Dodger position player ever to start a postseason game at age 21. Seager was the Dodgers best hitter in September, his first stint in the majors, hitting .337/.425/.561 in 27 games.

The number of postseason games played by Ethier, good for 14th in Dodgers history. Up next on the list is Roy Campanella at 32 games, though all of Campy's contests were in the World Series.

Ethier is seventh in most postseason games since the team moved to LA.

During the game on July 24, the Mets began their series of trades, acquiring Kelly Johnson and Juan Uribe from Atlanta. Those two weren't great upgrades, but just one night before the club had John Mayberry Jr. and Eric Campbell batting fourth and fifth. Sprinkle in a healthy Wright, plus a red-hot Cespedes, acquired in another deal, and New York suddenly had an offense.

"In my opinion, I believe that was the trade that set things where we started to go," Mets manager Terry Collins said. "It was a situation when Sandy [Alderson, Mets GM] made the deal, he came in and he and I talked. I took the same message that he and I talked about out to the players and hey, look, we've got a good team. You hit, you play."

Mets Game 1 starter Jacob deGrom averages 95.0 mph on his fastball per Fangraphs, good for 12th in the majors among pitchers with at least 100 innings. He will be the slowest-throwing Mets pitcher of the first three games. 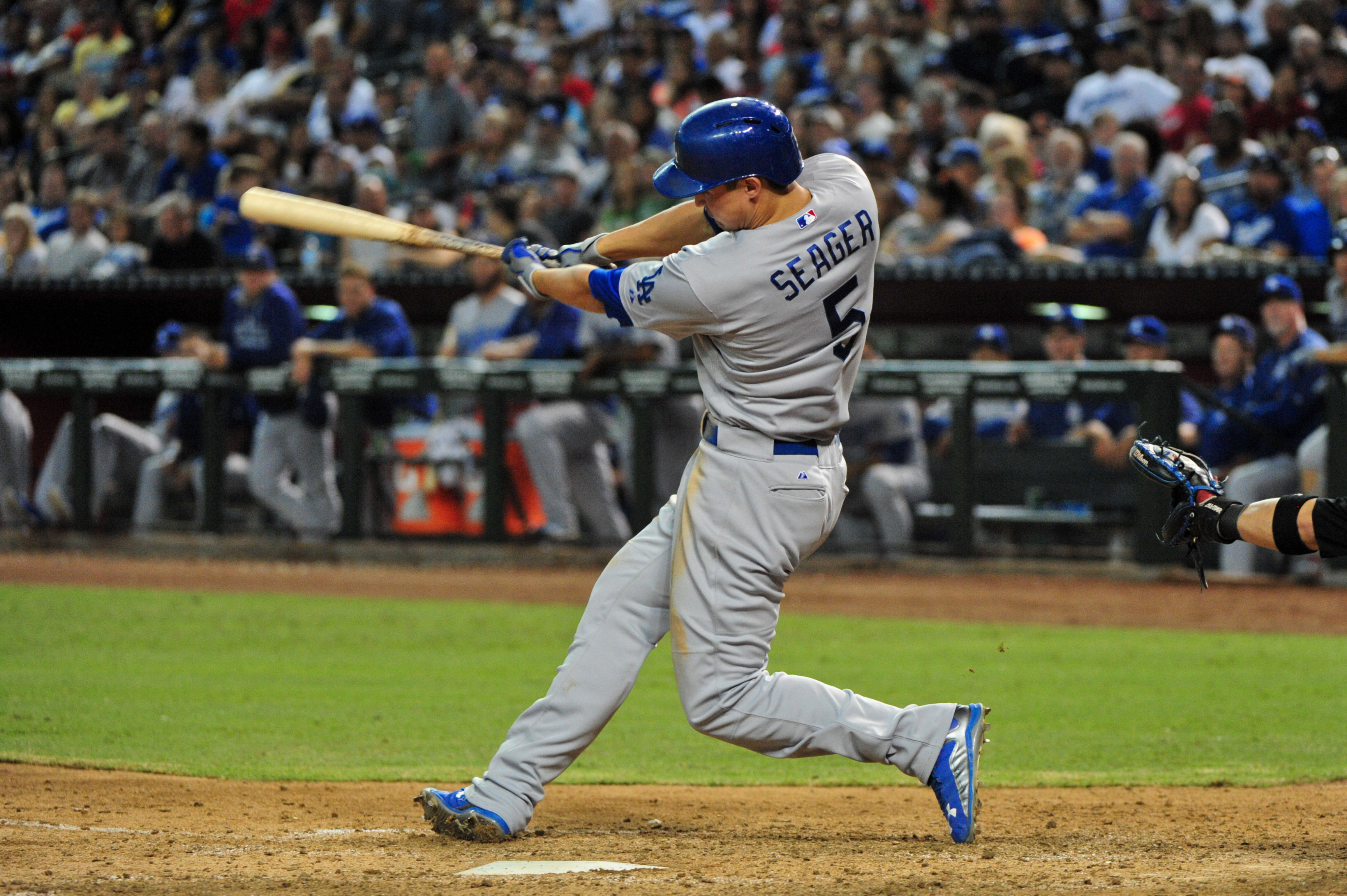 1. Is the Dodgers' offense actually good?

But that only translated into 4.12 runs per game, eighth in the National League and right at the league average (4.11).

"The way we play is different this year. We have a longer lineup. We have more guys who fight more at-bats," Gonzalez said. "Our home run output and on-base percentage difference is something you can look at."

One factor in run scoring being down for the Dodgers this year is their performance with runners in scoring position. In 2014, they lead the majors in batting average, OBP, slugging percentage and plate appearances with RISP. This year the overall performance is in the middle of the pack, but they were dead last in the National League and 29th in the majors in PA with RISP, so the opportunities just weren't there.

The notion of the Dodgers being too reliant on the home run this year was discussed.

"We don't go into the game trying to hit home runs. We just go into it with a game plan of guys getting quality at-bats. That's obviously going to happen fairly regularly," Mattingly said. "I don't know if that will continue in the playoffs; usually you aren't facing No. 4 or No. 5 starters. Good pitching beats good hitting, usually. So runs will be hard to come by."

The Dodgers finished with a 55-26 home record in 2015, their best home mark since moving to Los Angeles in 1958. So starting at home and potentially getting three of the five games at Dodger Stadium is probably a good thing.

Clayton Kershaw has started on three days rest in Game 4 of the NLDS in each of the last two seasons, and the Dodgers left open the possibility of him doing so again, not yet announcing a Game 4 starter.

That was part of the thinking in starting Kershaw in Game 1, that he could possibly come back on three days rest — "As you start thinking about moving forward, it leaves options for us in later games," Mattingly said. — with Zack Greinke able to start Game 2, then Game 5 if needed on regular rest thanks to the off day. Also, there is the matter of Kershaw being the best pitcher on the planet.

The Dodgers would be more inclined to pitch Kershaw in Game 4 if they were facing elimination, though the lure of using him to try to close out the series up 2-1, with Greinke at home in Game 5 as the fallback, as pretty strong, too.

"It's a complicated decision. Part of what complicates it is usually not going off a great sample of guys doing it. It's becoming a less frequent thing," Zaidi said. "There is no easy way to evaluate it, and you have to go case by case. A lot of times you have to see how the series evolves before making any decisions."

Alex Wood waits in the wings, ready in the bullpen for the first few games if needed, and able to start Game 4 if the Dodgers decide against Kershaw on short rest. 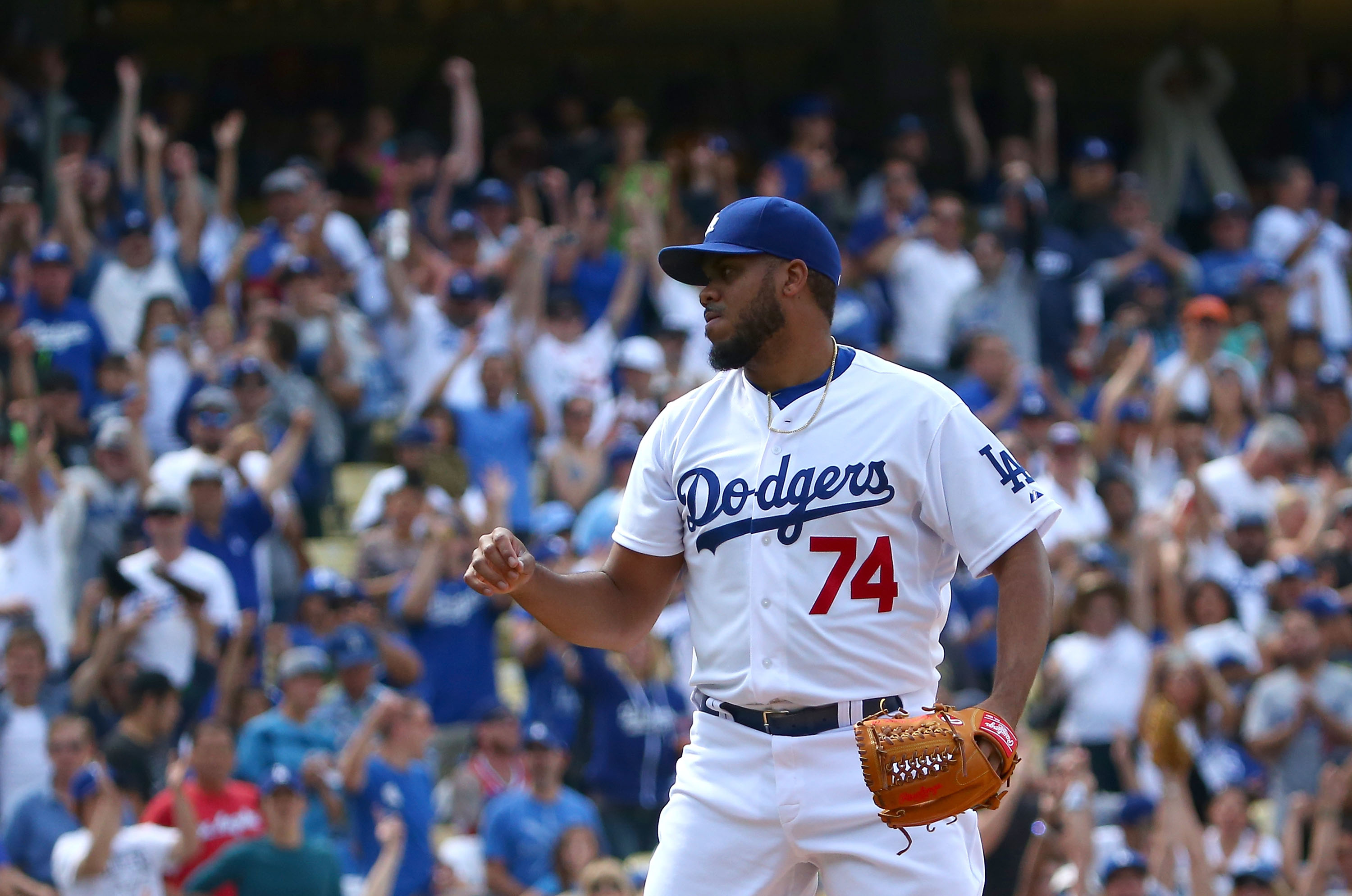