LOS ANGELES -- While Dodgers president of baseball operations said on Monday that the club's main focus this offseason will be pitching, it's important to remember that the offense will not be ignored.

Outside of external upgrades, vital to the offense in 2016 will be three players who declined for various reasons in 2015 — Joc Pederson, Yasiel Puig and Yasmani Grandal.

"Those are three big wild cards for us heading into the 2016 season," Friedman said Monday. "We'll do everything we can for them to be as good as they can in 2016, and if that happens we have a chance to be one of the more dynamic offenses in the National League.

"Being around them for a year and seeing their work ethic and what they put into it gives me a lot of optimism that they will be significant contributors next year."

Not that there was a clear date when all three started going south, since Pederson's swing problems began in June, Grandal didn't hurt his shoulder until August, and Puig suffered hamstring injuries on each leg in each half, missing 5-6 weeks each time. But just using the end of June as the divider, here are the numbers for those three:

Grandal had arthroscopic surgery to repair the AC joint in his left shoulder and is expected to be ready for spring training, with optimism stemming from the fact his labrum was untouched.

The Dodgers want Puig to get leaner this offseason, and he has been working with strength coach Brandon McDaniel in an effort to do so.

"He has continued to get bigger and stronger each year, but that may not be the optimal size for him to play 150-plus games. That's a focus. He's been getting after it this winter," Friedman said. "Also just mechanically. When he had the blister issue he formed some bad habits, with muscle memory and trying to overcompensate for the hand. So it's just getting him back to where he was mechanically."

Pederson went through a myriad of swing changes during the slump, with his defense keeping him in the lineup.

"I just think mechanically [Pederson] slowly over time got into bad habits. Nobody wanted to correct that as badly as he did, but it's just a really difficult thing to do in season," Friedman said. "With [Pederson and Puig], you're not asking them to change and become someone that they're not. It's much easier trying to get them back to where they were as opposed to something completely new to them.

"When Joc's right, he can hit left-handed pitching. But the benefit of versatility is having a number of guys who can play different spots."

Friedman wouldn't fully commit to Pederson and Grandal as starters going into next season, just based on the challenges ahead of each this offseason, but did count them among the 12-13 position players expected to start the season.

"We're pretty locked in offensively, outside of figuring out what we want to do at second base, whether that's staying internal or external," Friedman said. "But for the most part our position player group is pretty locked down."

It's hard to believe that the Dodgers won't try to make improvements to the offense in one way or another this winter. But really, what else was Friedman going to say?

Then again, the front office did say last year that they expected to move an outfielder, and eventually did, though the need to deal was more obvious a year ago.

Also last year, general manager Farhan Zaidi said of Dee Gordon, "We are not dangling him. He is our second baseman," then one day later Gordon was traded. That statement was factually correct at the time, and probably the prism through which to view Friedman saying Monday, "For the most part our position player group is pretty locked down."

Sure, it's set now. But through the many conversations over the next few months, there may be a fit elsewhere that comes up that might change that.

Friedman was asked if the Dodgers — sixth in MLB in home runs, third in walks, 17th in strikeouts in 2015 — might try to emulate more of a contact-heavy approach used by the World Series champion Royals.

"I don't do well with hard and fast rules. I would like hitters who are passive out of the strike zone, and really aggressive in the strike zone, and who can hit the ball in the seats," Friedman said. "There are players who accrue their value in different ways that we're open minded to. As a unit we need to do a better job situationally. Some of that is personnel-driven and some of that is just mindset. We're continuing to talk to it." 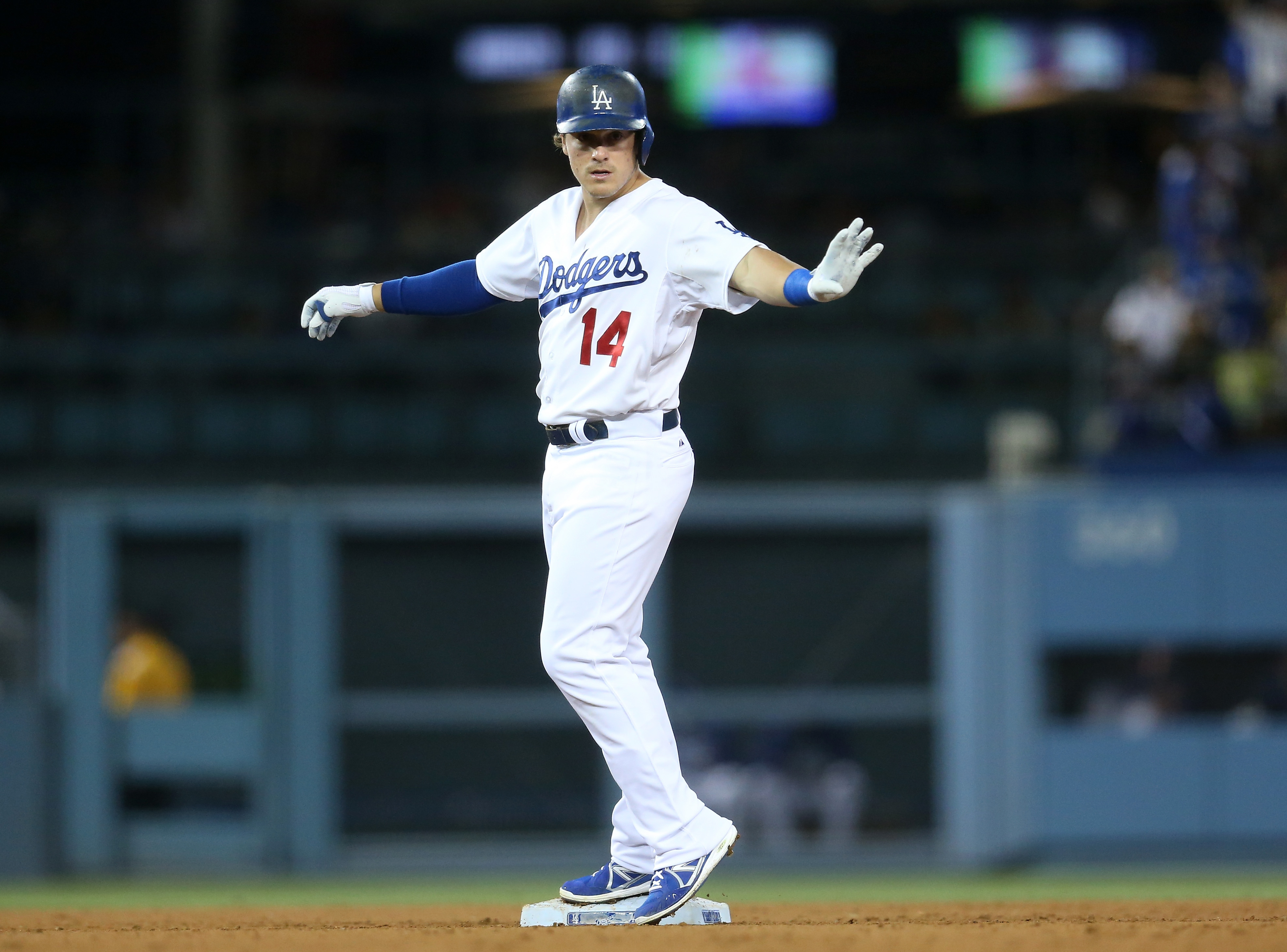 Kiké Hernandez figures to be a large part of the 2016 Dodgers offense, somewhere. (Photo: Getty Images)

The one position of need Friedman mentioned was second base, currently with a Howie Kendrick-sized hole. The Dodgers could turn at second base to utility man Kiké Hernandez, who impressed in 2015 hitting .307/.346/.490 in 218 plate appearances in 2015 while starting at six different positions.

"His track record, he hit right-handed pitching better than he did last year," Friedman said. "We're very optimistic about what he can do going forward, but whether that's playing second every day or bouncing around and getting a lot of at-bats, I'm not sure yet."

Friedman was also asked if he expects the arbitration-eligible A.J. Ellis to return in 2016, a decision solely in the Dodgers' court.

"We haven’t really gotten to our existing guys in great detail yet, with everything else we’ve had going on, as well as the personnel hirings that we’re doing, so we have not spent a lot of time talking through our existing group that is under control," Friedman said. "Obviously A.J. was a large part of our success last year. Both what he contributes on and off the field is certainly not lost on us."

So even though the Dodgers' position players are "pretty locked down," expect the front office to maneuver more than they say they will this offseason trying to find the right combination on offense.