Note: this list was originally the No. 26 through No. 30 prospects, but after trades and signings this list has shifted to Nos. 28-32.

The off-season rankings of the top Dodgers prospects move right along with numbers 26 through 30 in the organization, including four high-upside talents and a pitcher we hope can be a fast mover. All five players here fall into the same 45-grade tier, which I have as the largest tier in the organization. If you have any questions about how I reached these rankings, please consult this article, otherwise feel free to ask me anything about these five guys in the comments or on twitter.

Pfeifer just missed my top 200 prospects for the 2015 draft, but I bumped his grade from a 40 to a 45 overall after more scrutiny of his performance and stuff, especially after showing well in the College World Series. Pfeifer’s production at Vanderbilt during the 2015 season may be his greatest attribute, as his size, age, and stuff all suggest he might profile best in relief. 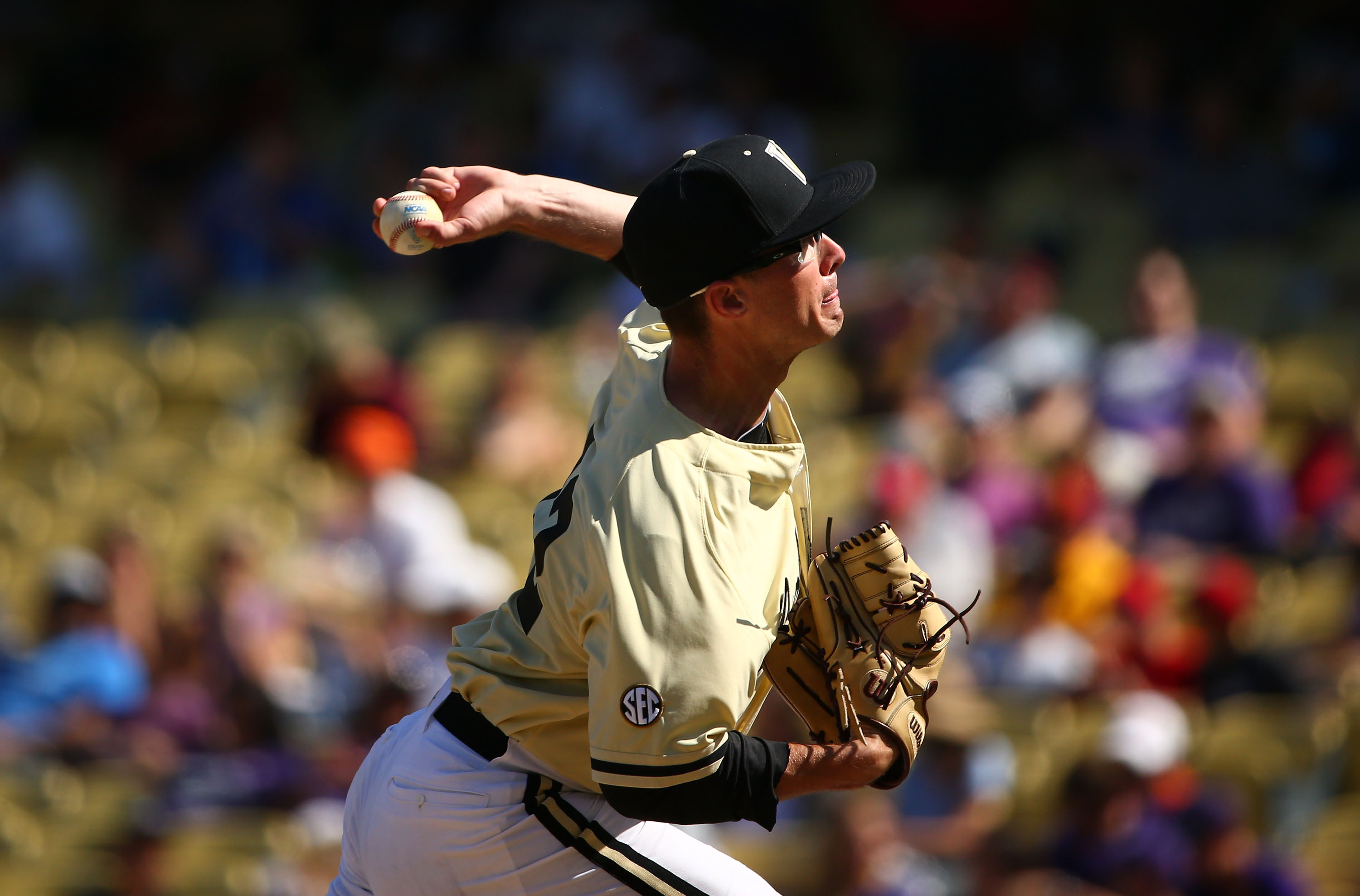 Pfeifer packs a fair amount of athleticism in his compact frame. His delivery appears efforted, but he repeats his mechanics well and seems comfortable with his quick tempo. He makes the most of his height (listed at 6’0) by throwing from a high ¾ slot and he displayed solid overall command down the stretch for Vanderbilt.

Perhaps the biggest question facing Pfeifer is just how much stuff he can show starting every fifth day as a pro. Pfeifer’s pitches all played up during the College World Series, but I wonder if he can consistently stay 90-93 with his fastball as a starter. The Dodgers had to shut him down one outing after starting, so it remains to be seen just where his stuff will settle in.

Pfeifer features two above average secondary offerings. He mixes in a solid curve and a change-up that will flash plus based on arm speed and fade. He can throw all three pitches for strikes and displays above-average pitchability. He was highly effective at generating swings and misses in college, but might have trouble replicating those numbers at the higher rungs of pro ball where his moderate stuff and polish can be mitigated by the talent he will face.

Pfeifer is fairly old for a player awaiting to make his full season debut, but he has the polish to jump Low A and might open in the California League rotation. His upside is that of a back end starter or left-handed reliever, but we need to see how he makes adjustments to the pro workload before his future role can become clear.

Acquired as part of the Dodgers’ intelligent use of International signing pool resources, Paroubeck joined his second team in the same calendar year. Paroubeck continues to draw interest based on his raw tools, but has yet to spend enough time on the field refining them. Paroubeck did finish the season on a high note and finally feels ready to take on full season ball in 2016. 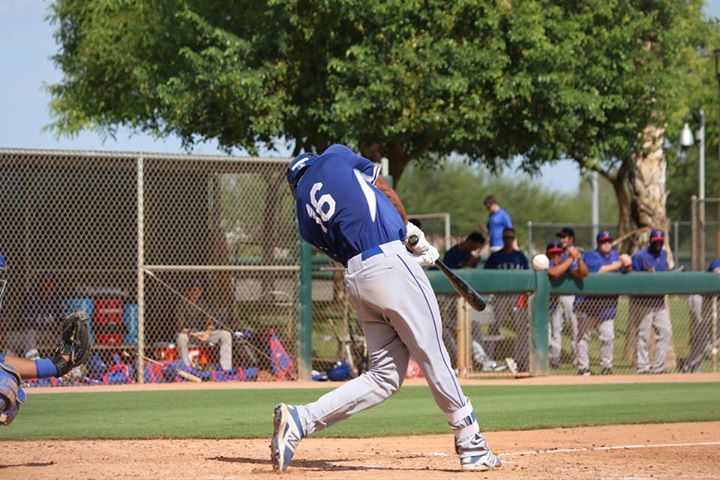 Paroubeck’s calling card is his power potential from both sides of the plate. He displayed excellent bat speed in his draft year, and the strength to carry balls out of the park from both sides of the plate. His swing looked a little rotational back then, potentially affecting his plate coverage and vision. Paroubeck did strike out at a high clip last season, including a 27.3-percent strikeout rate in the Pioneer League.

Paroubeck spent time in both corners last season, but settled primarily in left field. He was a solid overall athlete when drafted, but it remains to be seen just how much injuries may have taken their toll on his ability to run and move quickly in the outfield. He also flashed a solid average arm in his draft year.

2016 is already a make or break year for Paroubeck, as getting field time is becoming more critical to his development. He’ll be 21 years old before ever playing meaningful innings in full season ball, and to date his raw tools are ahead of his in-game skills. He has the upside of a power producing corner outfielder that can hit the bottom-middle of an order, but he’s got plenty of work to do to refine himself into a useful major leaguer.

Scavuzzo enjoyed the breakout year in 2015 that I wish for Paroubeck in 2016. Scavuzzo finally started to polish his considerable raw tools and you can start to see the middle order potential in his bat. That said, Scavuzzo is still raw and is starting to slide down the defensive spectrum, putting even more pressure on his bat. 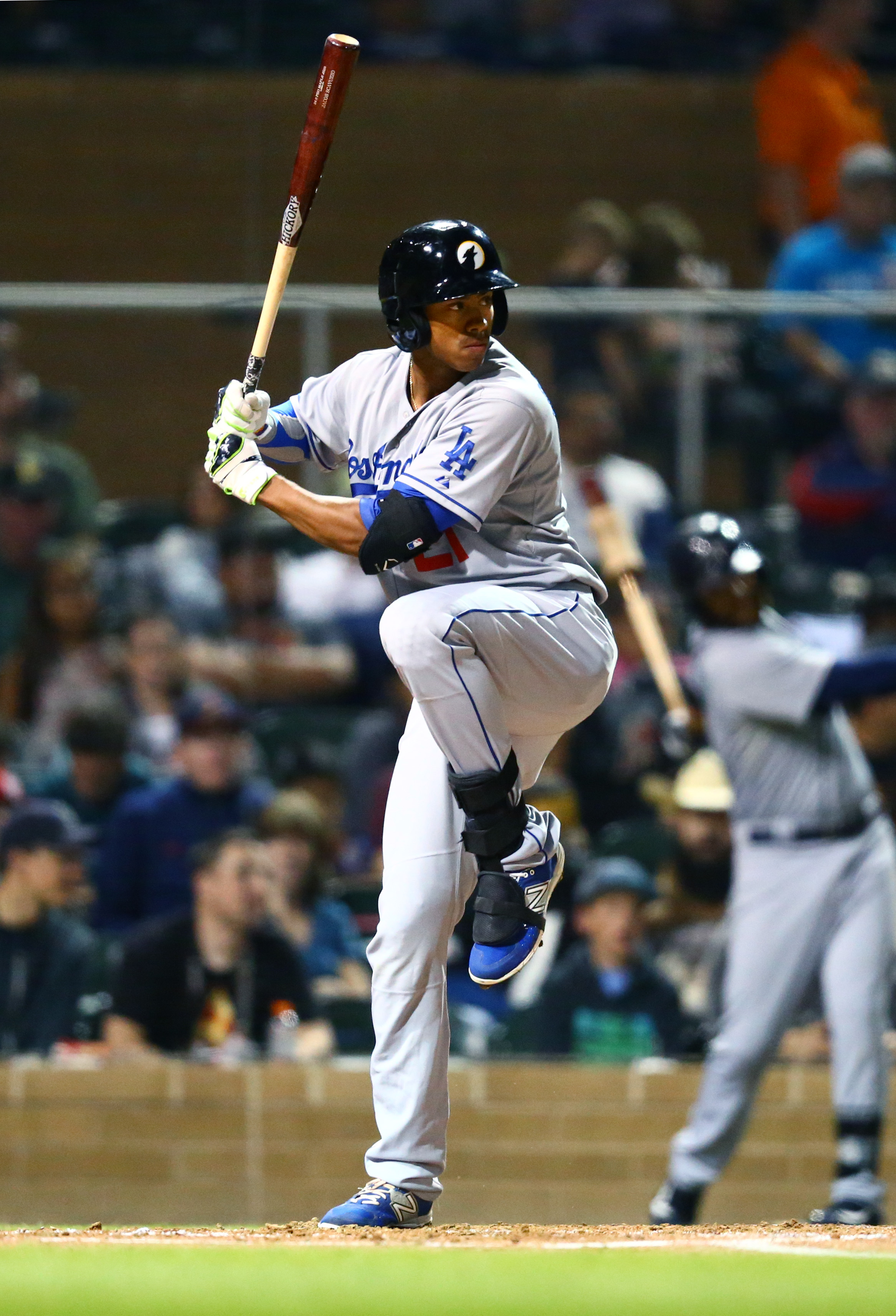 Scavuzzo has one of the more impressive builds in this organization, listed at 6’4 and 185 lbs., Scavuzzo has looked noticeably more filled out this season, and the extra strength has likely assisted in the increase in his power. As he’s filled out, though, Scavuzzo has slid more often to an outfield corner, and there’s even been talk of trying him at first base in the fall league, which will put more pressure on the development of his bat.

Has bat, however, has come around quite nicely in the last few months. Scavuzzo employs a high leg lift and deep load, but shows overall solid bat speed and at times plus extension. Between the leg kick and occasional noise in his set-up, Scavuzzo can run into problems with timing. Contact seems to come easy to Scavuzzo, and he generally shows good barrel control, but he will still chase pitcher’s pitches off the plate and needs to reign in his selection.

I believe Scavuzzo has a solid average hit tool on the whole, and his already adequate K-rate (21 percent in the California League) for a power hitter could decline with a more refined approach a the plate. He’s been slow to develop until this point, but things are starting to click for Scavuzzo and his prospect status could take a major leap forward if he continues to hit for power and average in the Texas League. Downside here is a toolsy fourth outfielder that doesn’t match performance to his physical gifts, but Scavuzzo’s trending upward.

Abdullah was not a player I was familiar with coming into the MLB Draft, but the Dodgers thought highly enough of his abilities to pay him a bonus more commensurate with an early round draft pick. Based on my early looks at his pre-draft film, it’s easy to see why he gets evaluators excited about him, and Abdullah headlines the next wave of pitching prospects about to approach full season ball. 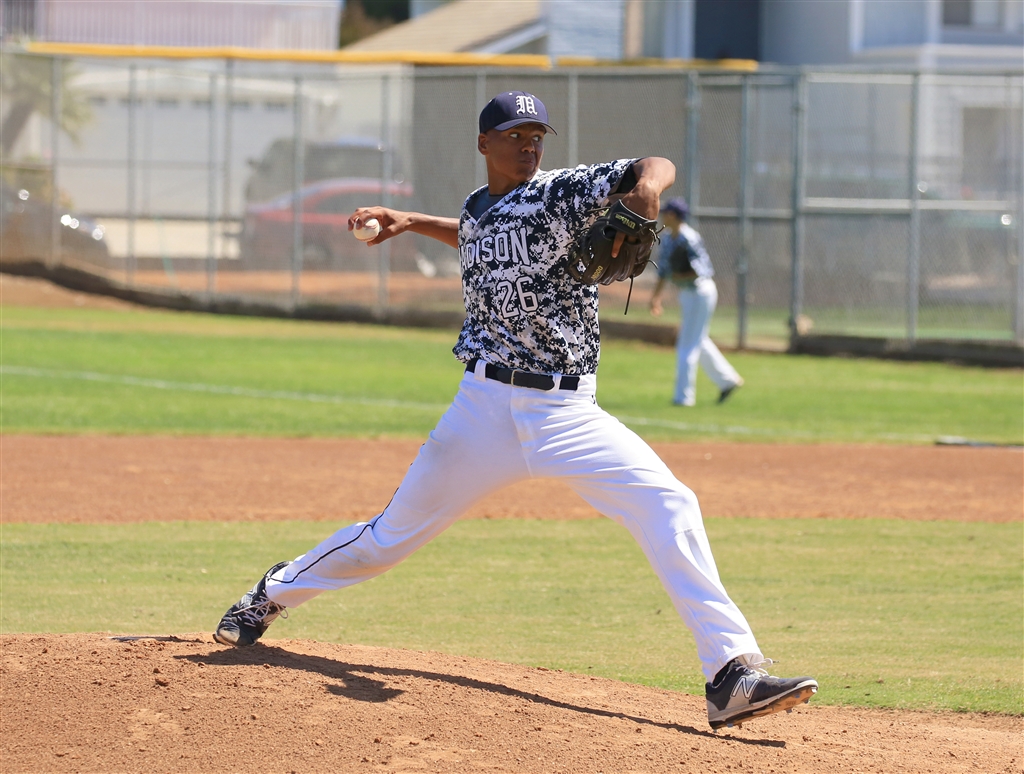 Abdullah has the foundation of a solid pitching prospect. His frame is a highly projectable 6’4 205 lbs., he has a clean arm action, and he’s shown an advanced feel for spin on his breaking ball. His curveball presently has deep 11-5 break, and as he matures, the hope is he can continue to firm up the break to control the pitch more frequently in the zone.

His fastball currently sits in the upper 80’s and should improve with physical maturation. The pitch has some arm side run and looks to feature a solid amount of spin/rise. Abdullah has also flashed a solid average change-up on film but the fastball and curveball appear to be his primary offerings.

while Abdullah is a projectable athlete, his delivery can look a little stiff at times. His lower body doesn’t always match the looseness of his throwing arm, and he will have to monitor his athleticism/agility as he fills out his frame.

Abdullah is still fairly raw and unpolished. He only threw thirteen innings in his professional debut and he may not be ready to break camp with a club. He’s young enough that the Dodgers can afford to keep him back in extended spring to develop alongside similar upside talents in Logan Crouse and Kam Uter. Because Abdullah is the more polished of the three, he ranks higher, and could prove ready sooner to face the challenges of full season ball. It’s hard to put a ceiling on his talent at this point, but the big leagues are still in the distant future.

A personal favorite of mine with a prodigious tool set, Walker is one of the more natural looking athletes in the system. That distinction hasn’t yet correlated into consistent production, but Walker could be poised for a prospect breakout in full season ball. 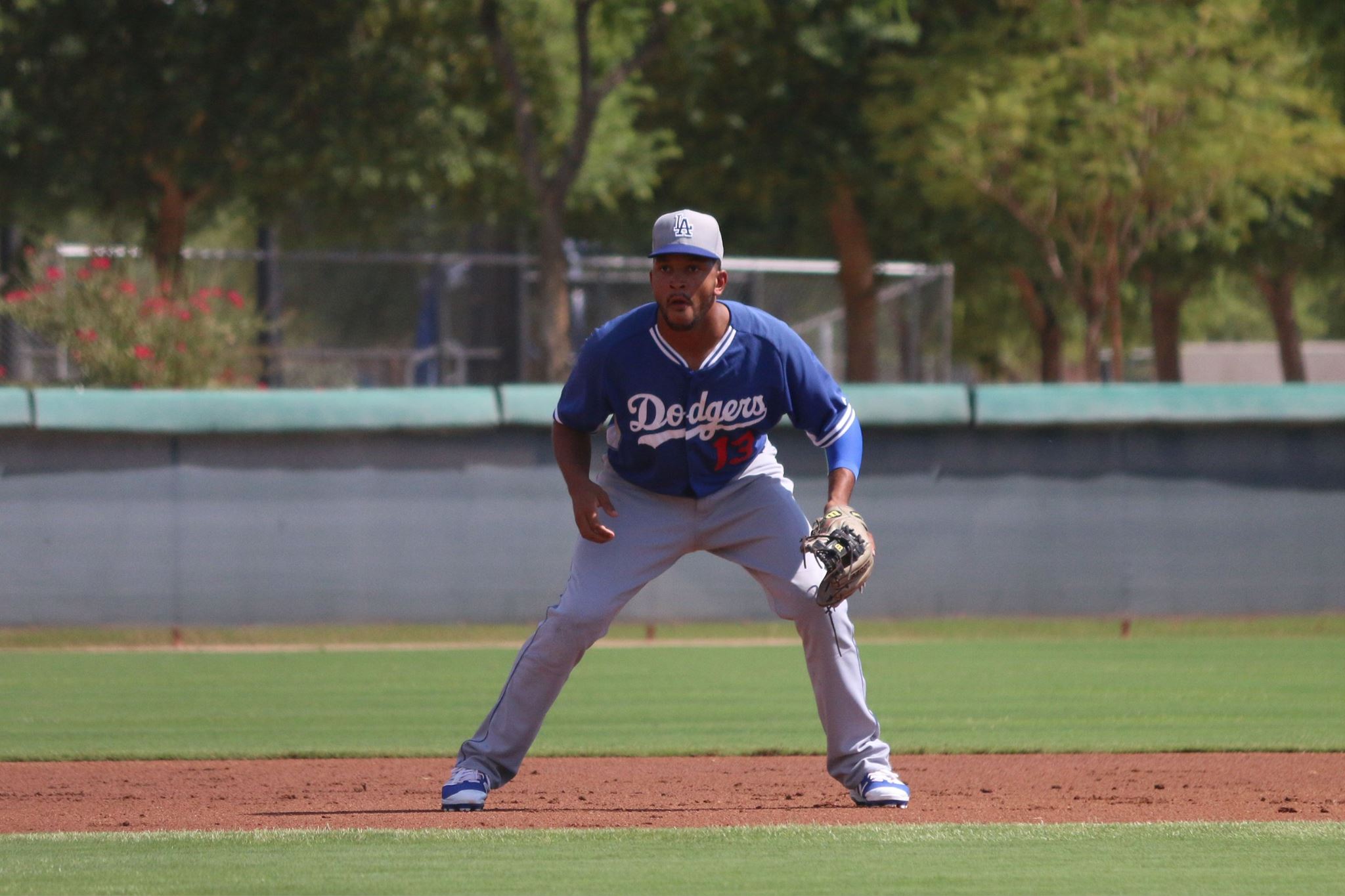 Walker’s physical tools are some of the more impressive in the system. He was clocked as high as 95 mph from the outfield by Perfect Game in high school, and his arm strength should grade out at plus or double plus in either the infield or outfield. He’s a solid average runner underway and shouldn’t have an issue transitioning to an outfield corner. Walker looks like a fluid mover in the infield, but needs to work on his hands and footwork on throws.

Walker’s bat has the potential for loud power. He has a buggy whip swing with a high extension, but the overall path can be long. He struck out in an alarming 33 percent of plate appearances, showing his rawness at the plate. He will have to learn to tone down his swing and be shorter to the ball to improve his hit tool. He makes hard contact when he connects and he’s still young enough to make significant improvement and develop an average hit tool.

Walker is one of the bigger boom/bust prospects on my top 30 list, but the tools are too loud to just dismiss based on early returns. He’s flashed potential with the bat and the positional flexibility and athleticism you hope to see in young offensive prospects. He’s entering his third professional season and may not yet be ready for full season ball, but the ceiling is significant if he can correct his contact woes.

NOTE: There are a few minor league free agents on the lower levels of this list. They will remain in their current position until they sign with a new tea.