Note: this list was originally No. 21 through 25, but through trades and signings that came after, this list covers Nos. 22-27, with Cuban outfielder Yusniel Diaz slotting in at No. 23.

The prospect countdown continues with our first Dodgers prospects in the 50-grade tier, where relief arms are prominent. Despite not matching the upside of the group of guys ranked 26-30, the players here are closer to the major leagues with higher floors. For most of the following names though, the grades/rankings here are likely to be their peak, as their limited utility as relievers and lower upside make it difficult to forecast future grades higher than 50 (with the possible exception of our No. 21).

While not the flashiest prospect, Oaks’ profile is highly sought after in many organizations that prioritize keeping the ball on the ground and pitch economy. A Tommy John surgery survivor, Oaks accumulated over 125 innings across two levels in 2015, and didn’t see a drop off in production at the High-A level. His upside is limited to back end starter, but his potential to eat innings and present polish might make him an enticing trade piece. 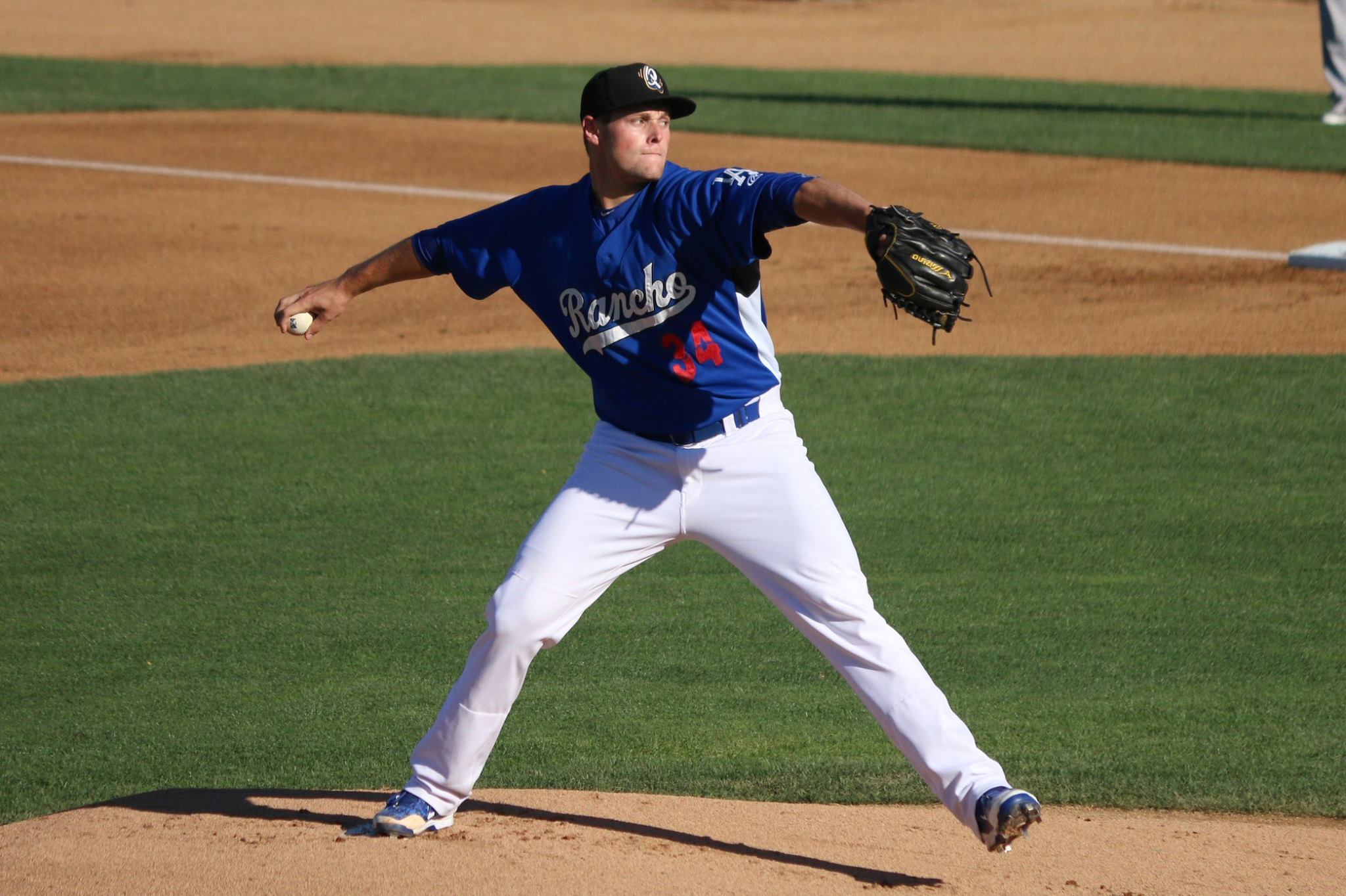 Trevor Oaks has the size (6’3, 220) and the pitch economy to suggest he’s capable of pitching deep into games and accumulate innings across a long season. He threw six or more innings 14 times last season in his first year of full-season ball, and his low walk rate and high groundball percentage suggest this type of workload is sustainable.

Oaks’ primarily pitches off a heavy sinker out of a low ¾ arm slot. His lower body stays fairly upright, and at his height, the pitch has plenty of plane. He commands his sinker well, with a walk rate of 1.24 BB/9 across 100 innings in Low-A, jumping slightly to 1.96 BB/9 in the California League. The sinker helped him limited hard contact, producing a whopping 62-percent ground ball rate across two levels, versus a low 13-percent line drive rate.

Oaks’ future is likely tied to his ability to stay in the rotation, as the stuff doesn’t profile in relief. He will mix in an average breaking ball and change-up, but he might have the most swing-and-miss potential in his sinker. His profile suggests he prefers to pitch to contact though to generate quick outs, and his low strikeout rate of 6.26 K/9 in the California League does not portend to more strikeouts up the ladder.

Oaks is ready for the big jump to the Double-A rotation. He’ll be 23 to start the season and roughly on par developmentally with his age peers. Should he continue to generate ground balls and limited free passes, he could be ready for the major leagues as early as the second half of the 2016 season. Such an opportunity might be more likely elsewhere, as the Dodgers are deep in back-end starting prospects that could make Oaks expendable in the right trade.

Vanegas happened to make my first top-20 rankings last season, and only drops slightly heading into 2016. His age/performance might suggest he should have slid further, but it’s still hard for me to overlook the arm talent he displayed at Stanford. 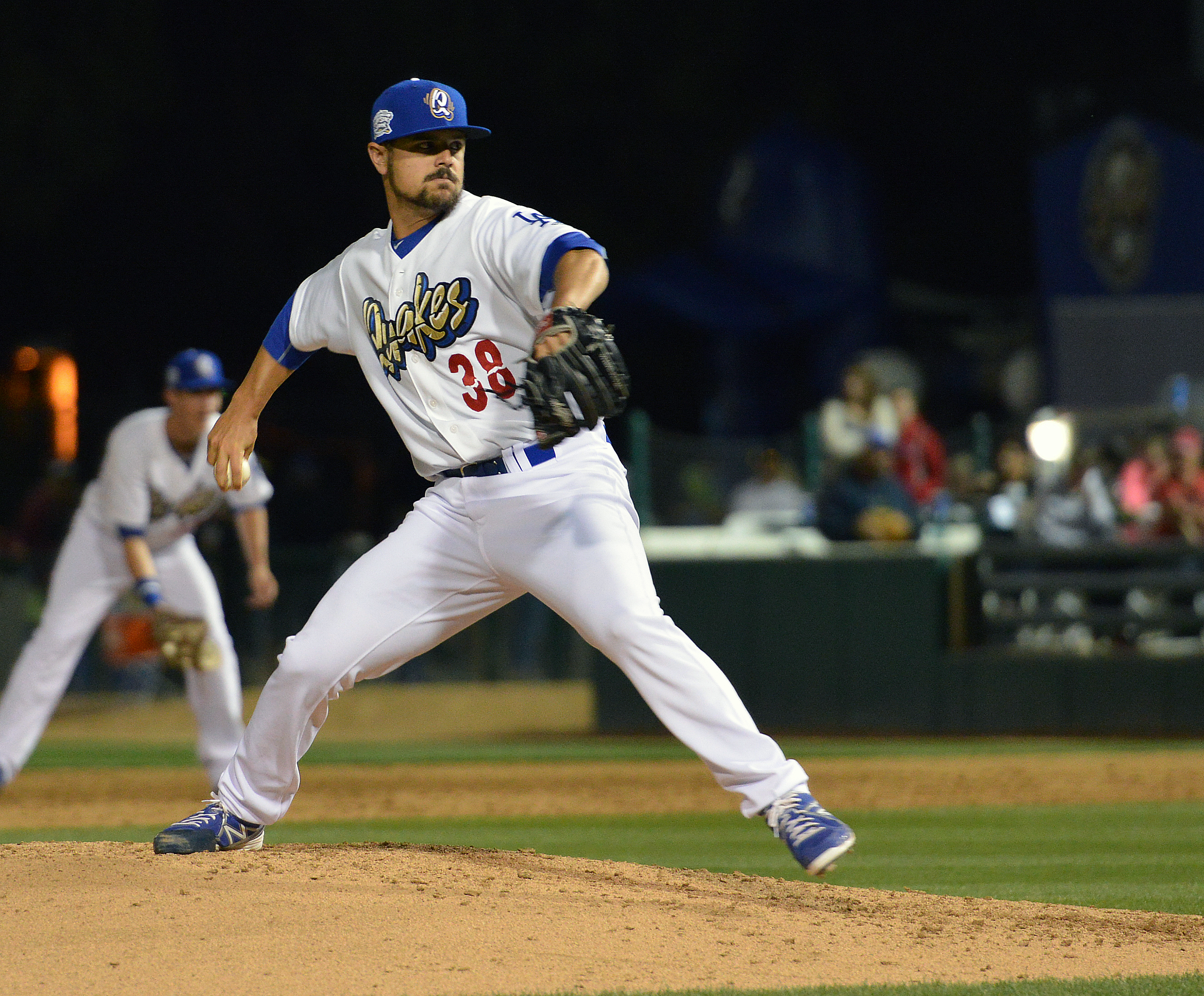 I have not seen a scouting report on Vanegas’ stuff in Rancho Cucamonga, but the statline looks light compared to the potential he’s displayed previously in his arm. When right at Stanford, Vanegas could run his fastball up to 97 mph with late life that jumped on hitters. Vanegas coupled the fastball with a short but sharp slider that he could throw for strikes or as a chase pitch.

Vanegas has had a lengthy injury history that might have eaten into some of his potential. He’s not had nearly the amount of mound time you would expect for a college senior signee that will turn 24 during the 2016 season, and this lack of experience tends to bare itself in his numbers. He still needs to refine his command to passable levels and hasn’t missed enough bats to justify his high walk rate.

Vanegas is athletic enough that I believe he can improve his command by fine tuning his delivery. As a reliever now, his arm action shows some effort and his release point could be inconsistent on his slider at Stanford. He missed some time during the 2015 season, but overall pitched a satisfactory amount of innings for a relief prospect.

Vanegas did not move quickly up the ladder like I had hoped in my 2015 profile, and this grade is still heavily reliant on the arm I saw in his Stanford days. He should be marked for the 2016 Tulsa Drillers bullpen, where I will get a first hand look at his present stuff. If it’s taken a step back, he will likely plummet down this list, but if he performs to his past potential, Vanegas could still feature at the back end of the Dodgers’ pen in time. He’s a rare-for-this-list boom or bust reliever, and 2016 is already a pivotal year for his professional status.

The second California Baptist pitcher drafted in 2014 to make this list, Dirks was acquired with Jordan Paroubeck in a July 2 trade with Atlanta for international pool money. Relatively unknown when acquired, Dirks moved quickly through the Rancho Cucamonga bullpen before settling in toward the back of the Tulsa pen. While Dirks isn’t the highest ceiling reliever, he has the deception, stuff, and pitchability to factor in a major league pen in short time. 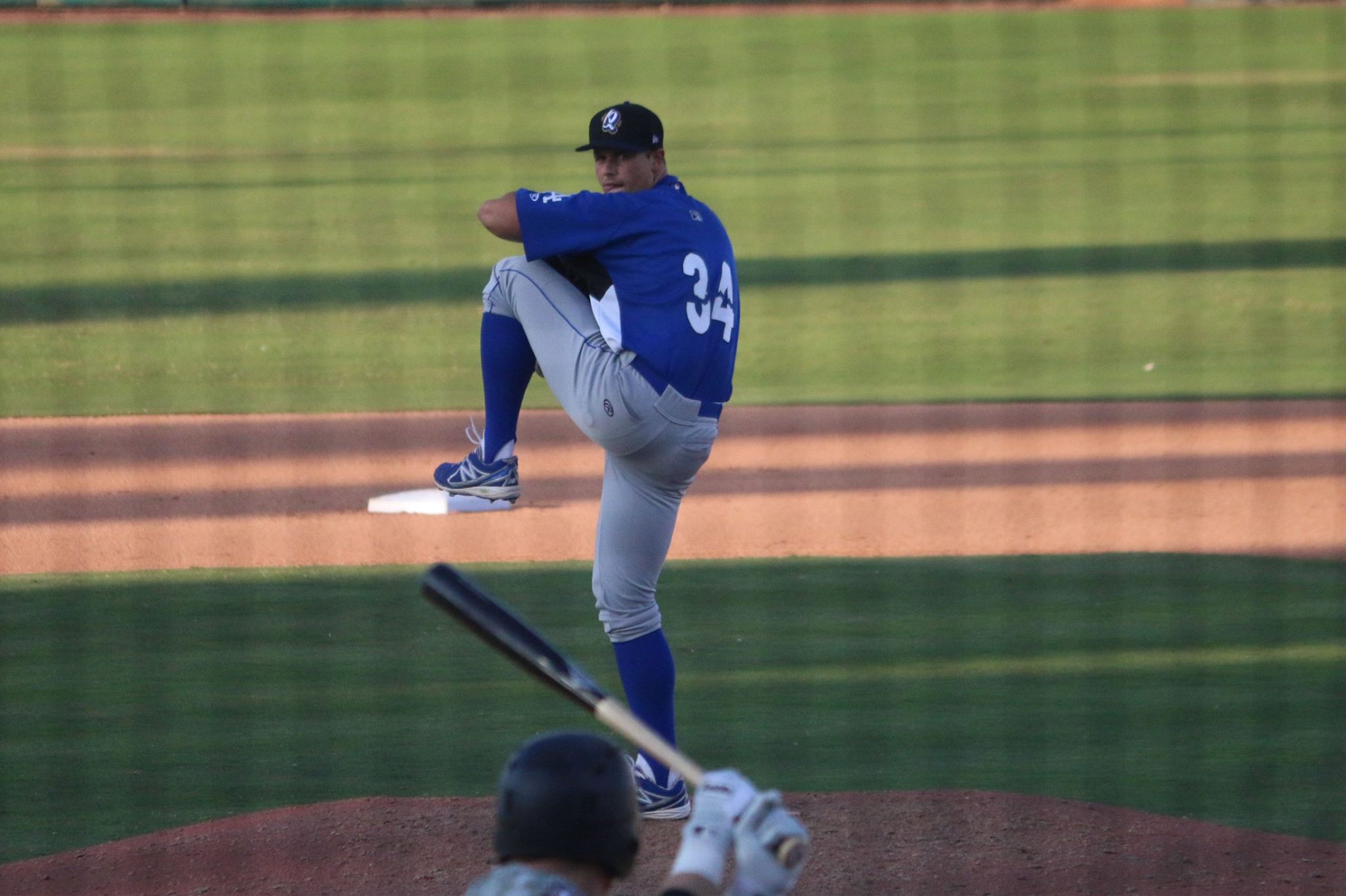 When you watch Dirks pitch (sorry the linked video on the list isn’t helpful here) the first thing you’re likely to notice is his delivery. Dirks has a jump-like push off on release, similar to Carter Capps and Jordan Walden, but not quite as exaggerated. This deception in his delivery likely allows his 92-94 mph fastball to play up. The deception is needed, because the pitch itself doesn’t have much life, and he works to spot the ball on the fringes of the zones.

Dirks backs up the fastball with a solid average slider and change-up, neither flashing plus. He throws everything from the same slot, and wants to pitch off his fastball. Dirks can run into trouble trying to be too fine and nibble the zone, leading to hitter’s counts and walks. He’s put up good strikeout numbers in each pro ball stop, and has enough deception/stuff for solid numbers in the majors.

While Dirks pitches toward the back of the bullpen in the minors, his upside is more likely that of a middle reliever. He doesn’t have that one put-away pitch you typically see in a late inning prospect, but he’s impressed thus far with his ability to miss bats and keep the ball on the ground. Dirks will likely head to the Oklahoma City bullpen, and could see a debut at some point in 2016.

The highest rated present reliever this year, Rhame has the most potential in the relief group, but still hasn’t quite pitched up to his stuff. Rhame has some of the best arm strength in the system and the potential to feature at the back of a major league bullpen, but he still must add polish to his stuff and approach. 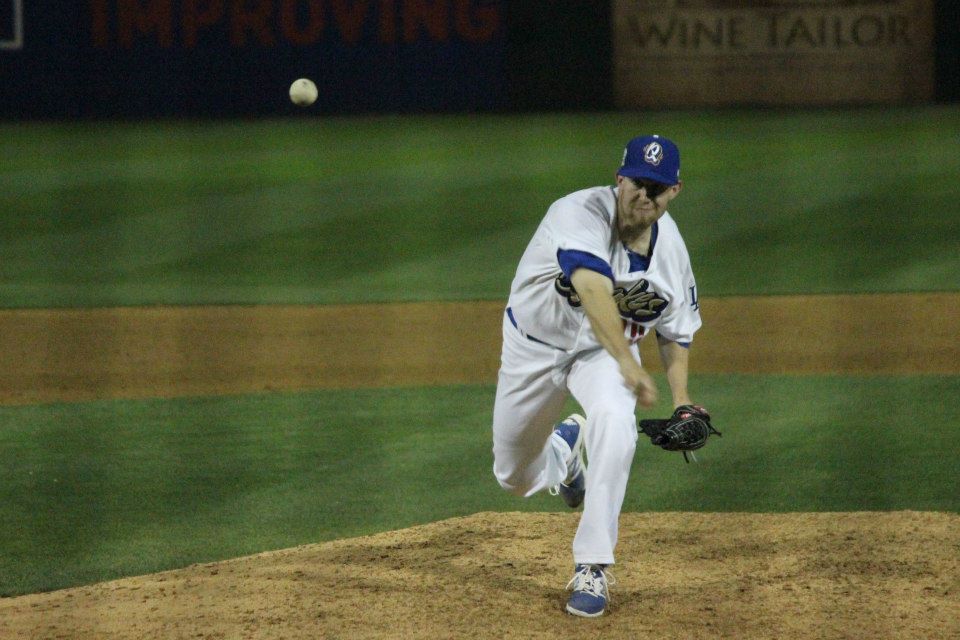 I only got to see Rhame briefly this season, and I didn’t see the upper 90s fastball he’s said to have reached, but the arm strength is apparent. Rhame’s fastball gets on hitter’s quickly, and can be deceptive coming from his short, stocky frame. He has a tight slider to go with his fastball, but both could use more refinement before reaching the major leagues.

Rhame’s build is fairly unassuming for a power reliever. He’s listed at 6’1 190 lbs. and is more thickly built in his upper legs, likely aiding his power. He’s said to have lost a lot of weight after leaving the University of Oklahoma, which has helped his delivery and stuff.

In my brief look, Rhame attacked the upper zone with his fastball, and his 33-percent groundball rate can attest to that. He’s shown solid control numbers throughout his professional career, and is further along at finding the strike zone than other power armed relievers in the system. The next step in his refinement will come from improved fastball and slider command, leaving fewer pitches up for hitters to hit.

Despite his ranking compared to other relievers, Rhame might be better served starting 2016 back in Tulsa and being the focal point of the Drillers’ bullpen. The Oklahoma City pen will likely be crowded, and Rhame just needs more innings to further his refinement. Sharper break on his slider or velocity more consistently in the high 90s could push Rhame to the back of the Dodgers bullpen as early as 2017.

You can read more on Diaz within the profile of No. 12 Yadier Alvarez.

One of the more impressive organizational debuts last year (the most impressive is still to come on the list), De Jong arrived like Dirks in an International bonus pool allotment trade. De Jong was thrown right into the Quakes rotation, and thrived in the California League despite a flyball oriented repertoire. De Jong might not have the highest ceiling, but he is a combination of intriguing growth potential and present polish. 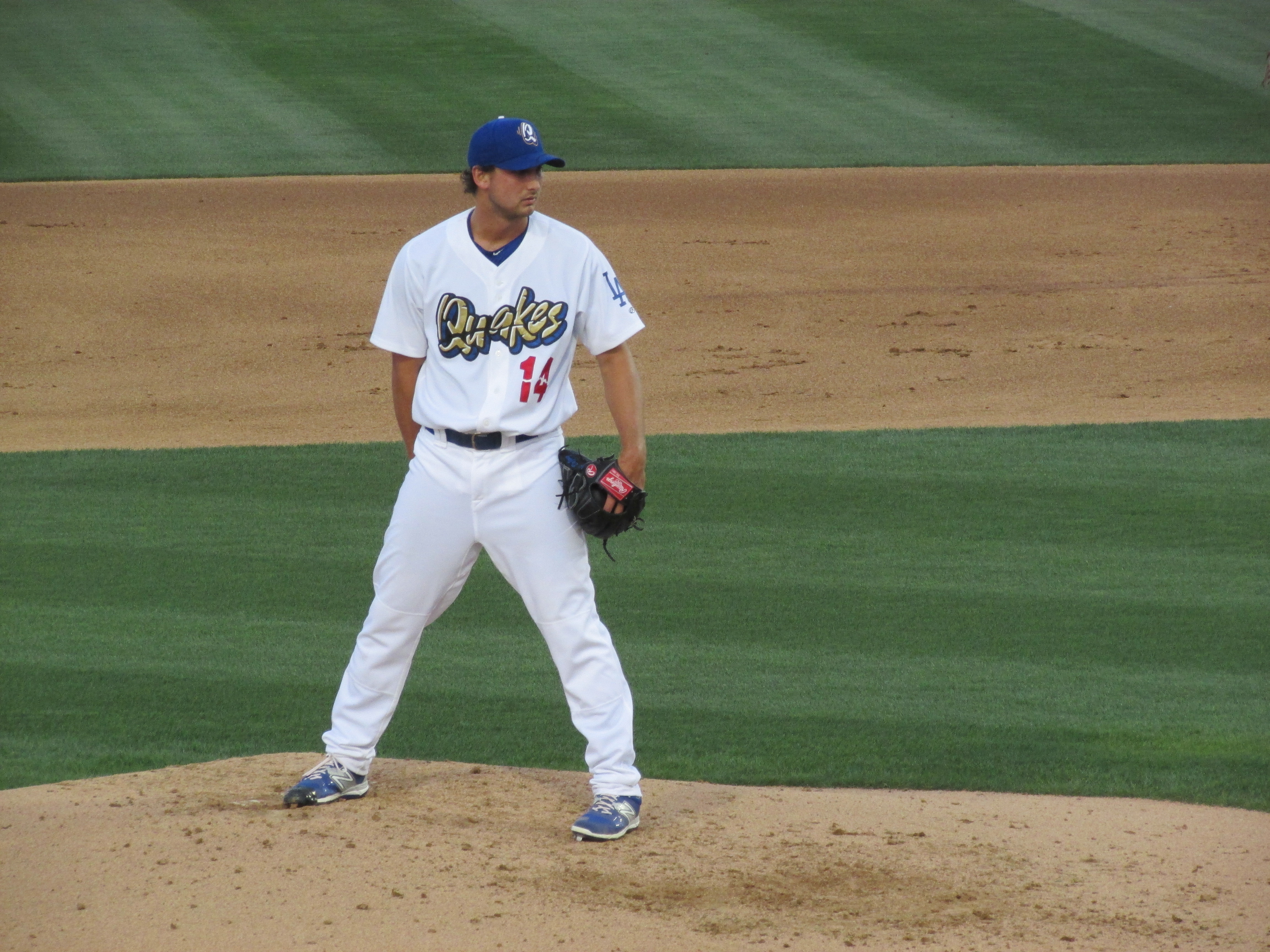 It’s hard to measure spin rate with the naked eye, but De Jong certainly looks like a high-spin guy with a sharp, big-breaking curveball and a fastball with late riding life. He doesn’t throw particularly hard right now, often sitting in the upper 80s-lower 90s, but he misses bats nonetheless to suggest there’s deception in the fastball. The feel for spin on the curveball is particularly advanced for a 21-year-old.

De Jong has already demonstrated excellent command of his repertoire. His 9.36 K/9 and 2.7 BB/9 in the California League is impressive when you consider that he didn’t let the offensive-friendly elements of the league effect his attacking mentality. De Jong appears to have an advanced feel for pitching, working hitter’s eye levels with the deep curve down in the zone and the riding fastball up. Despite a low ground ball rate (40 percent), De Jong avoided hard contact (10-percent line drive rate) and home runs better than his stuff might suggest.

De Jong still has some projection left in his build. He’s a sturdy 6’4, 205 lbs. and has room to add strength to fill out his frame. He demonstrates solid body control in his mechanics, maintaining a fairly upright delivery and hiding the ball well in back. While he does have a bit of a head whack, there’s nothing in his numbers to suggest it has any bearing on his control/command.

De Jong is an exciting prospect that I’m surprised didn’t find his way into my Top 20 (speaking to the depth in the system now). He reminds me of Marco Estrada (minus the change-up) as a guy that can generate swings and misses despite middling velocity, and could be capable of holding down a third or fourth spot in the rotation. Estrada, however, is probably the best-case scenario, and with the Double-A jump still to tackle, it’s best to continue tempering expectations. In a different organization, his present polish could make him a call-up candidate in 2016, but he has quite a few names to leapfrog on the depth chart to see time in Los Angeles soon.