Note: this list was originally for the No. 31 through No. 61 prospect in the Dodgers' system, but after trades and signings the list is now 33-60.

Taking the place of last year’s "Just Missed" article, this year I’m highlighting some of the more notable names that missed the 2016 top 30 Dodgers prospect list, while giving you my rankings and notes on each player in the 31-61 range. I’ve keyed in on a few players that match a particular philosophy to my rankings just to give you an idea on how I place and prioritize value on certain types of prospects. As always, feel free to ask about any of the ranked players listed, either in the comments or on twitter.

Three of the more notable names of this year’s Dodgers international crop find themselves on the outside looking in at the top 30. The biggest obstacle for international free agents cracking the list so early is tied to their risk score, and more specifically, their distance from the major leagues.

It’s quite possible that these names are at least two years away from even coming stateside to compete in the Rookie League. While 16- and 17-year-old internationals often show a handful of loud tools, their refinement against a 20 to 21 year old college prospect often pales in comparison. Additionally, I feel more comfortable in ranking high school draftees higher because of the established summer showcase circuit that gives lay people like myself more information and video to evaluate those players.

That’s not to say a 17-year-old international signee with no stateside experience will never make my top 30, but I just want to be more comfortable with the profile, or see tools so loud you cannot dispute their future quality. At No. 37, Starling Heredia came the closest to breaking through, and I’m almost assuredly going to be the low man on him when other outlets start releasing their Dodger prospect lists.

That being said, Heredia has the highest ceiling score outside the top 30 at a 60 grade. He’s already displaying plus raw power and physicality, but those plus points could easily become concerns as he matures. For one, Heredia’s swing is so geared for power that it’s hard to see even an average hit tool without considerable development and coaching. He looked understandably overmatched in the Under Armour All-Star game, but it showed just how far he still has to go.

An in-depth look into the process David Hood uses to evaluate Dodgers prospects and an explanation of his ranking system.

Additionally, Heredia’s body type is pretty atypical for a 17 year old international prospect, already quite mature but in real danger of outgrowing centerfield, if not the outfield entirely. Should Heredia have to slide to first base four years from now, that will put even more pressure on his bat.

Because of the rawness and precociousness of international signees, they don’t represent much value to the organization for the first couple of years while they develop. While Heredia has some name recognition, it’s hard to envision him being much of a trade piece right now because of how far out the return is for the acquiring team.

Give these players a few years to mature in the system, and you could see them climb as high as the top 10. I prefer to give such players the time to develop before ranking them so aggressively, while acknowledging the future value they may possess. Heredia and Co. will have many more chances to rank considerably higher on this list.

Last season, two players were most frequently noted as obvious omissions from my list. I didn’t rank them primarily because I lacked enough information to rank them responsibly, and I had concerns on both players. Leon, unfortunately, matched my pessimism with his play last season.

Coming from following Rockies prospects, the biggest trap was over-excitement for Pioneer League offensive performances without viewing the performance in context with the league’s offensive environments. My general rule of thumb was to be more concerned when a top draft pick or international signee didn’t perform as opposed to over exuberance for big offensive numbers. Because of this background, I met Leon’s rising prospect stardom with skepticism.

Moving to the unfriendly offensive environments of the Midwest League were more than unkind to Julian Leon’s offense, with a lack of contact being the biggest concern. Leon struck out in almost 32 percent of his plate appearances while walking only 6.5 percent of the time. The tradeoff for strikeouts did not come in the form of power either, as Leon posted an ISO (slugging percentage minus batting average) of under .100 in Low-A.

From an evaluation standpoint, I still see a lot of natural strength and power in Leon. Tapping into it consistently still looks to be concerning, as Leon’s bat speed appears subpar and he has a slow trigger on his swing as well. His upside is still present in his age and raw power, but he’s only three months younger than Willie Calhoun, and just seven months younger than Cody Bellinger, who showed considerable growth and development and his ready for the challenge of double A. It no longer feels relevant to mention Leon with that class of prospects.

The draft versions of the International free agents above, both Crouse and Uter flash exciting tools and the upside to feature much higher on this list next year. Crouse becomes more interesting the more you dive deeper into his profile. Listed by some outlets as 6’6, the former Florida State commit has the feeling of a player that could make a tremendous leap in velocity and stuff.

Crouse had above-average spin rates at Perfect Game National last year, where trackman data was utilized. He presently sits in the upper 80s with his fastball, but has the frame and athleticism to forecast future development.

Uter had another season of limited in-game exposure, making it hard for me to gauge his progress, but he was drafted into the organization as an intriguing combination of athleticism, size, and ceiling. It’s hard for me to give you much more on either, but remember these two names because they could make significant jumps in 2016. 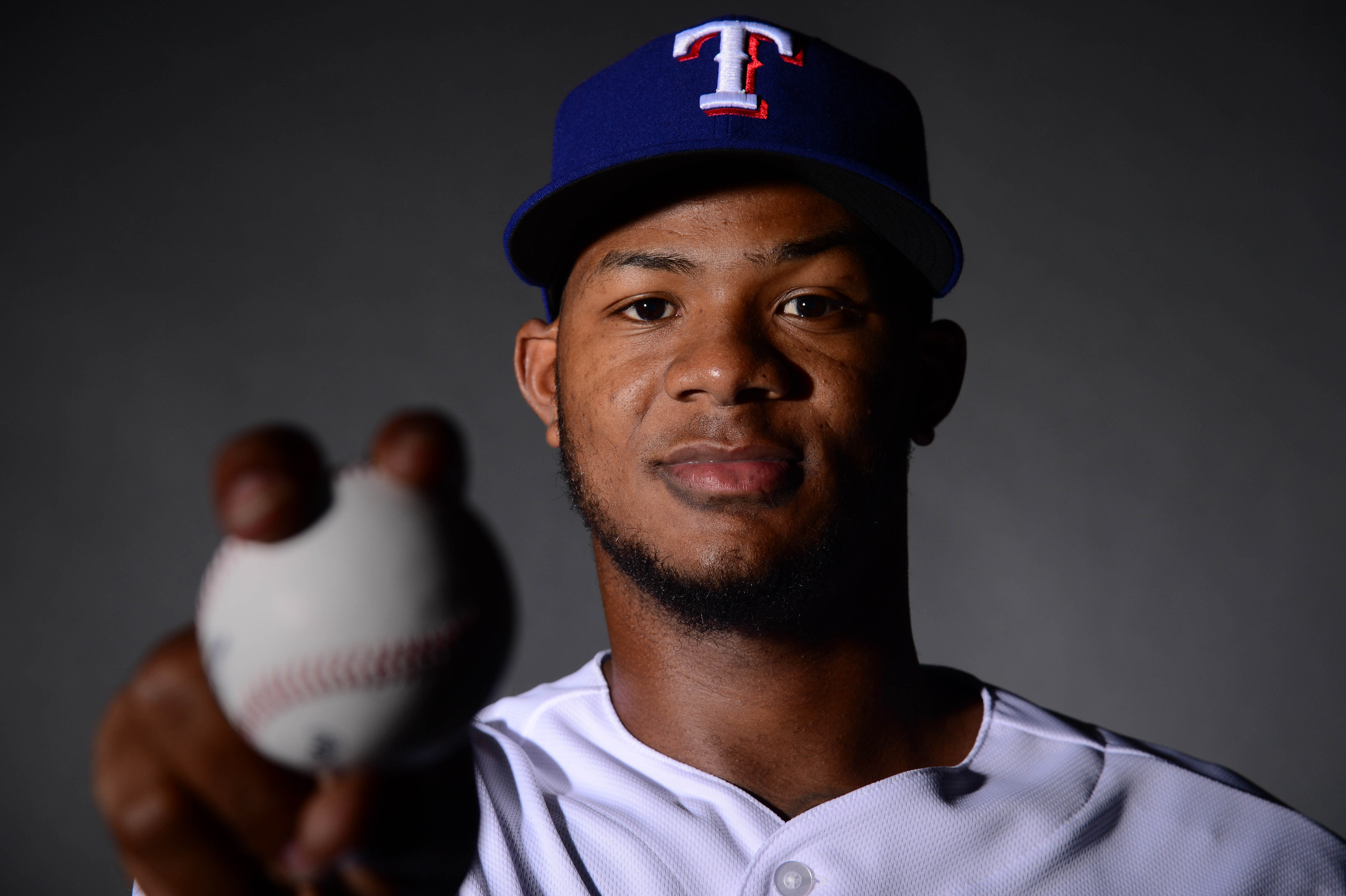 The newest addition to the list, Bonilla is the latest young waiver claim by the front office but with the added security of being injured. One thing I had to try to do last season was to not get too worked up over this front office’s prospect waiver claims or free agents based on the notion that there’s something about the players that the Dodgers’ brain trust sees that the rest of us might be missing. While I give the front office a tremendous amount of credit for their process, eye for talent, and aggression in pursuing it, I still find it important to trust my own opinion of what I’m seeing in front of me.

In Bonilla, what I see is plenty of good, enough to keep him on the fringes of the top 30, but like most waiver claims, he comes with his share of obstacles. The first big challenge for Bonilla will be staying on the forty man roster, as the team could eventually face a roster crunch when he’s activated off the disabled list. We saw players like David Huff and Brandon Beachy ride the "designated" wave last season, but when healthy Bonilla is young and talented enough to be attractive to other clubs on the waiver wire.

The positives with Bonilla are the two offspeed pitches he employs. His firm straight change (the in-vogue trend in pitching) is his best swing-and-miss option and deceives hitters with it’s velocity and action (or lack thereof). I actually like his slider, though it’s his most derided pitch. He controls the pitch well and can throw it down in the strike zone, and gives hitters another look compared to his change-up.

The weak link in Bonilla’s repertoire might just be his fastball. His release point on the pitch often varies in video I’ve seen, and his overall command is poor. He can run the velocity into the mid 90s on occasion, and his overall arm strength is plus. Bonilla’s build is very physical, but he appears loose and athletic.

I’d like the see the Dodgers work him in the Triple-A rotation upon his return to pitching, but I expect he’ll be pushed as a reliever with one plus pitch. He’s had solid peripherals through his minor league career and could be a useful contributor in either role.