It was 25 years ago today that the Dodgers signed center fielder Brett Butler as a free agent, adding one of the best leadoff hitters in franchise history and one of the best of his generation.

It was an aggressive offseason makeover for the Dodgers, coming off an 86-win campaign in 1990 that saw them finish in second place, five games behind the World Series champion Reds.

With Strawberry in right field, the Dodgers lured Butler to play center field with a three-year, $10 million deal. Butler, entering his age-34 season, spent the first 10 seasons of his career with the Braves, Indians and Giants.

The Dodgers would ultimately exercise that club option in 1994, making the total contract worth $13 million over four years.

"I've always wanted to play for the Dodgers," Butler told the AP. "I'm flabbergasted about the whole thing. It's a dream come true for me to be able to play for Tommy [Lasorda] and the Dodgers. They're a class organization. ... I've still got to pinch myself."

That Butler was even available as a free agent was somewhat of a surprise. He was one of 15 players granted free agency in the winter of 1990 because of owners collusion in offseason three years earlier, the second such ownership collusion against the players. Three seasons earlier, Kirk Gibson became a free agent — and ultimately signed with the Dodgers — because of collusion in the offseason after 1985.

But another reason Butler left the Giants after three years for the Dodgers was because San Francisco made their choice earlier, signing Willie McGee instead. McGee, who stole Pedro Guerrero's MVP award in 1985* then robbed major league batting average leader Eddie Murray of a National League batting title in 1990, finally was part of something that helped the Dodgers. Bill Plashcke of the Los Angeles Times had more info:

Butler was hoping to remain with the Giants, but he was forced out when they signed Willie McGee to a four-year, $13-million contract because they assumed Butler's demands would be too high.

"Everybody was saying I wanted $15 million from the Giants--that was wrong," Butler said. "I never made that demand. I was stunned to be left out."

With Strawberry in right and Butler in center, that meant one of Kal Daniels or Hubie Brooks — who combined for 47 home runs and 185 RBI in the outfielder corners in 1990 — was likely on his way out of Los Angeles. Both thought they would be the one traded, again per Plaschke:

"I guess this means I have no job," Brooks said late Friday. "It's a good signing for the Dodgers, but I don't know what the deal is with me. Am I out of here? I don't know."

Said Daniels: "Somebody has to go, and I've got the feeling that I'm the guy. I think I've got more value than Hubie because of the age difference (Brooks is 34, Daniels is 27) and because I'm a left-handed power hitter."

It was Brooks who was traded, one day after Butler was signed, to the Mets for left-handed starting pitcher Bobby Ojeda and soon-to-be-20-year-old relief pitcher Gregg Hansell.

The same day the Dodgers signed Butler, they acquired switch-hitting minor league second baseman Greg Smith from the Cubs, who would be 23 in 1990 and was tabbed by general manager Fred Claire as someone "who can be our everyday second baseman."

Smith was 0-for-3 with a sacrifice bunt in 1990 and never played in the majors again. The middle infielder the Dodgers sent to Chicago, who was actually a year younger than Smith, would play 1,813 games and 17 more major league seasons. That was Jose Vizcaino.

But for 1991 at least, the Dodgers were covered at second base because on Dec. 16 they resigned free agent Juan Samuel. 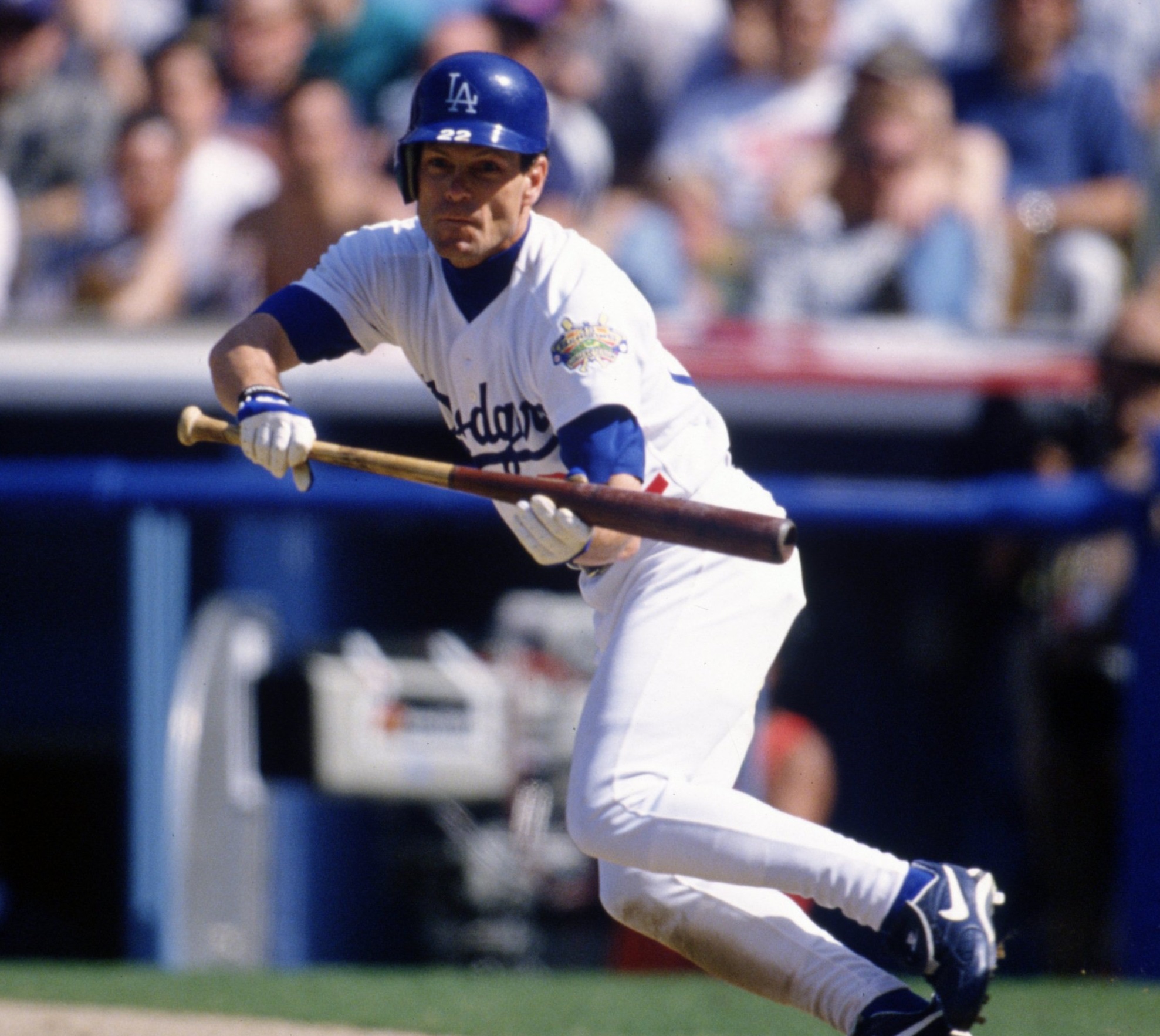 Butler was a master of the bunt (Photo: Getty Images)

But back to Butler, who was just the spark plug the Dodgers needed at the top of the batting order. In 1991, he hit .296/.401/.343, leading the National League with 112 runs scored and 108 walks, the latter tied for eighth-most in a season in Dodgers franchise history, and the second-highest Dodgers walk total in the last 65 years.

His 112 runs marked a career high for Butler and his fourth straight season and sixth time in the last eight years he scored at least 100 runs. It was also just one of seven times in 58 years that a Los Angeles Dodger has scored at least 110 runs in a season.

There have only been two Dodgers hitting streaks of at least 23 games since Butler's streak in 1991 — Paul Lo Duca hit in 25 consecutive games in 2003, and Andre Ethier reached 30 games in 2011.

Butler ranked second in the NL in on-base percentage in 1991, one of three seasons with at least a .400 OBP in the four years of his initial Dodgers contract, including the option year. He ranked third in the NL in OBP in 1992 and sixth in 1994. His worst of those four seasons was 1993, when his .387 OBP ranked 14th in the league.

There have only been 16 individual seasons since the Dodgers moved to LA that a player achieved a .400 OBP with enough plate appearances to qualify for the batting title, and Butler's three such seasons tie him with Mike Piazza and Gary Sheffield for the most years.

Butler in 1991 stole 38 bases, too. Sure, he was caught a league-high 28 times, but it was a simpler time and we didn't know any better. He ranked between sixth and eighth in the National League in stolen bases in each of the four years of his initial Dodgers contract.

Butler from 1991-94 stole 145 bases but was caught 76 times for a relatively poor 65.6-percent success rate. But during that span most of his outs were trying to steal second base. In those four years Butler was 24-for-27 (88.9 percent) when trying to steal third.

His 179 steals in total with the Dodgers rank fifth since the club moved west in 1958.

.392 -Brett Butler's on-base percentage in seven years with the Dodgers, ninth-best in franchise history; including a .401 OBP in 1991

Though Butler turned 34 in 1991, he proved durable during the life of his initial Dodgers contract, playing in 97.5 percent of games through 1994, an annual pace of 158 games in a 162-game season. He was fifth in the majors in games played from 1991-94 and third in plate appearances, leading the National League in both categories during that span, and in 1991 as well.

Expanding Butler's days as a regular to include his first four years with the Dodgers, from 1983-94 he ranked either 12th (Baseball-Reference) or 14th (FanGraphs) in baseball in WAR during that span, averaging between 3.5 and 4.1 WAR per season during that span.

Butler would later sign with the Mets for the 1995 season, but by midseason he was back in Los Angeles, reacquired by the Dodgers. He played through 1997, finishing out his career with the Dodgers, though he missed most of the 1996 season while fighting cancer. Butler put up a .363 on-base percentage in 105 games in his final season at age 40, the highest OBP ever by a Dodger 40 or older with at least 300 plate appearances.

And Butler's Dodger career all started with his signing, 25 years ago today.

*Look, we all know Dwight Gooden was probably the real MVP in 1985, but humor me here.