LOS ANGELES -- The Dodgers' three-year, $48 million contract with Scott Kazmir is their largest transaction to date this offseason, but it doesn't necessarily mean the team is finished making moves.

The team has been linked to Japanese right-hander Kenta Maeda, who must sign with an MLB team by Jan. 8 at 2 p.m. PT or be forced to return to Hiroshima for another year. General manager Farhan Zaidi wouldn't specifically address Maeda, citing team preference not to do so, though he did say the club hasn't ruled out adding another starting pitcher either via free agency or trade.

"We're always looking to improve the team. We certainly have a healthy number of starting pitching options, both veteran guys and young guys coming up through the system who will be ready at some point in 2016," Zaidi explained. "There are some guys coming back from injury, so to the extent that adding more certainty to the rotation is an option for us, we'll continue to take a look at those."

Kazmir gives the Dodgers four left-handed starters healthy heading into spring training, alongside Clayton Kershaw, Brett Anderson and Alex Wood. Another left-hander, Hyun-jin Ryu, is recovering from shoulder surgery and could be ready by opening day or he might not be ready until May or later. Brandon McCarthy is coming back from Tommy John surgery and isn't expected back until the All-Star break.

In addition to the Triple-A depth, the Dodgers have pitching prospects Julio Urias, Jose De Leon and Jharel Cotton, all of whom could potentially contribute as early as 2016. They made Kazmir's ability to opt out after just one year more palatable to the Dodgers, though at the same time wouldn't prevent the Dodgers from potentially adding another starter this offseason.

"Our young pitchers will be ready to step in if he does decide to opt out," Zaidi said. "But we're still out there evaluating options, and if something makes sense we're not in a situation where we feel like we can't add pitching at this point."

That added pitching could also come in the form of a reliever, another front on which the Dodgers are searching.

"We have some young guys in our pen who had some ups and downs, and I think they'll grow from that and be better in 2016," Zaidi said. "Adding some veteran presence in a way that makes sense for the composition of our roster and pen is something we'll continue to look at."

While Zaidi didn't want to mention or discuss Maeda even when directly asked, the GM did address Aroldis Chapman, traded on Monday to the Yankees by the Reds for an underwhelming quartet of minor leaguers. The Dodgers had a deal for Chapman at the winter meetings, only to back out when reports of domestic violence by Chapman in October surfaced. 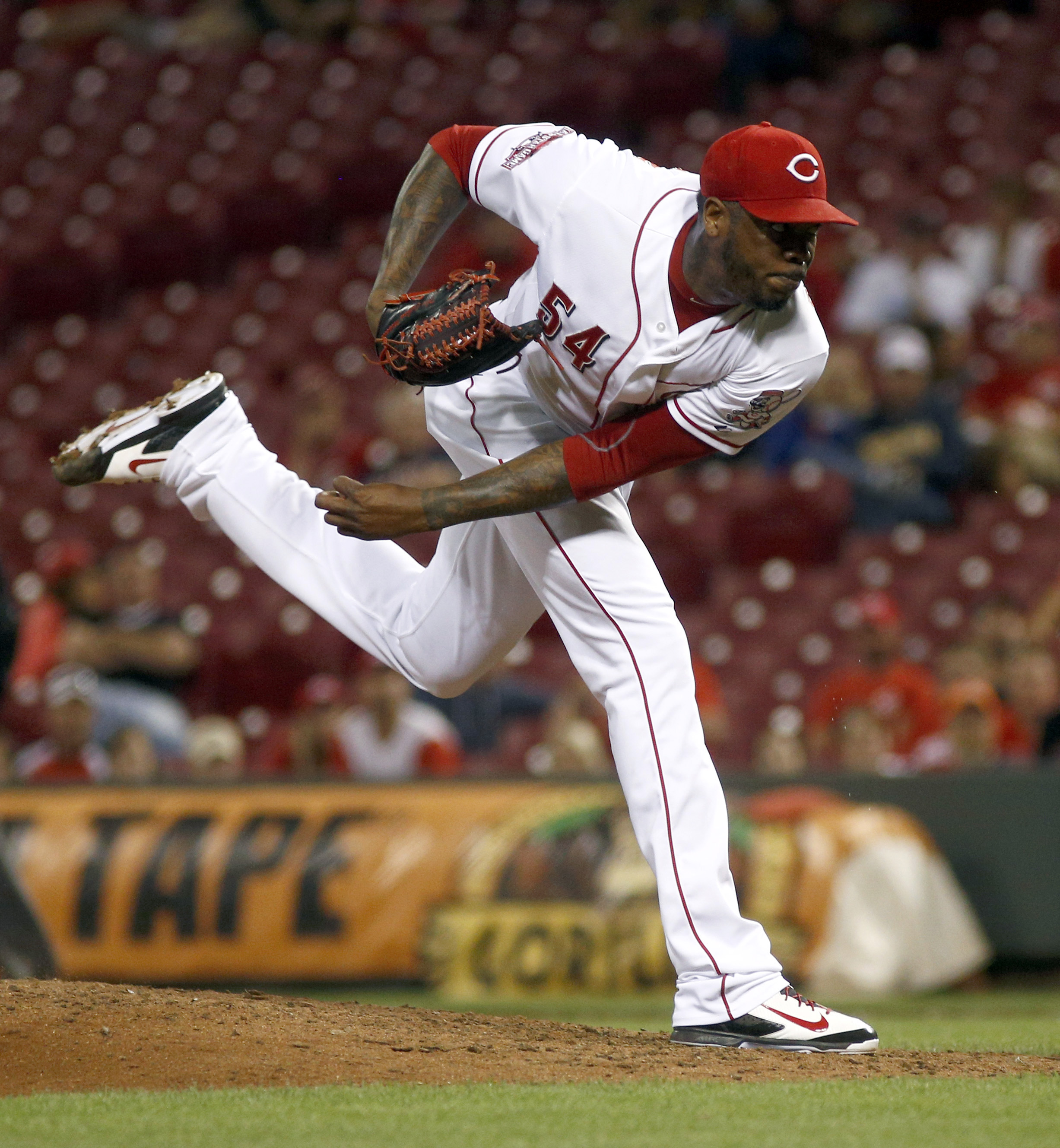 "As the details that emerged came to light we just weren't comfortable making the move," Dodgers general manager Farhan Zaidi said of the team's pursuit of Aroldis Chapman

"As was reported we did come to an agreement in principle on a deal, but as the details that emerged came to light we just weren't comfortable making the move," Zaidi confirmed on Wednesday. "Every situation like this is different, and every organization has to make their own decision about it. We made the decision based on the information that was at hand, and we stand by it. We've moved on from there."

The Dodgers also seem to have moved on, at least publicly, from a reunion with second baseman Howie Kendrick, still on the free agent market.

"The way things are right now, we feel pretty set at second base with Chase [Utley] and Kiké [Hernandez]," Zaidi said. "We're not really actively in the market for infielders at this point."

The Dodgers resigned Utley to a one-year, $7 million contract on Dec. 9, and Hernandez started at six different positions in 2015, including 15 starts at second base. The club also added second baseman Micah Johnson in a trade with the Reds and White Sox on Dec. 16.

Kendrick remains a free agent, and has spoken with the rival Diamondbacks per Nick Piecoro of the Arizona Republic. Should Kendrick sign elsewhere before the 2016 MLB draft, the Dodgers will get a supplemental pick in between the first and second rounds.

As it stands the Dodgers, who did not surrender a draft pick for signing Kazmir, hold the 22nd pick (their own first-rounder), the 30th pick (for losing Zack Greinke) and the 36th pick (for failure to sign 2015 No. 35 overall pick Kyle Funkhouser). Getting a draft pick for Kendrick would potentially give the Dodgers four of the first 40 or so picks in the upcoming draft.

Asked if the Kazmir signing would help keep Dodgers fans from freaking out, Zaidi chuckled.

"I think our fans are ultimately going to respond and react to how the team plays once April rolls around and the games actually count in the standings," Zaidi said. "That's what we're geared toward, and as long as we build a good and competitive team our fans will be happy."