Dodgers had highest payroll 28 years ago, too

Share All sharing options for: Dodgers had highest payroll 28 years ago, too 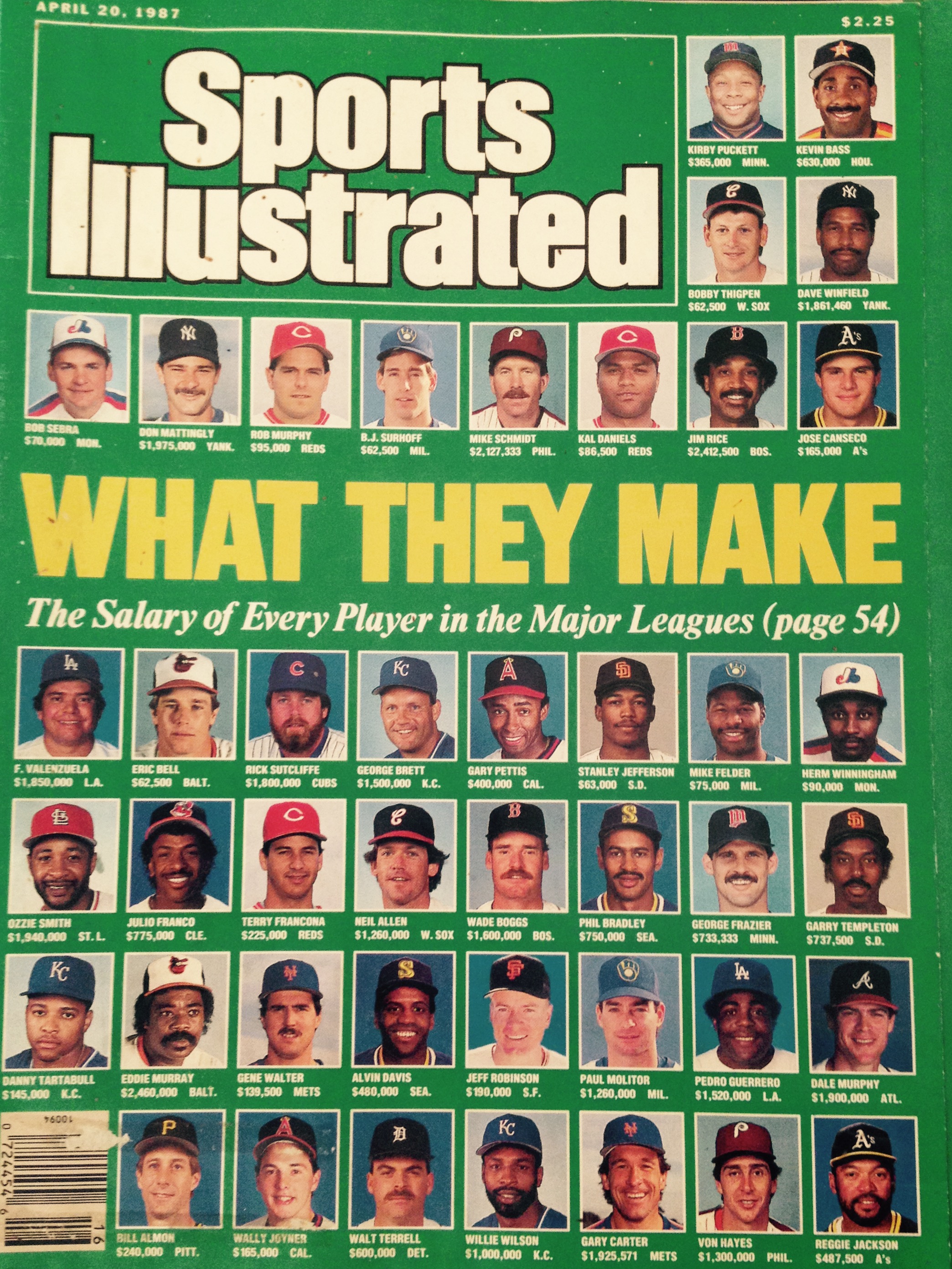 It's fun to look back at what might be my favorite Sports Illustrated issue of all-time, the April 20, 1987 issue, which showed the salaries of every major league player on an opening day roster in 1987.

One of my staples of youth, from adolescence through college, SI was a welcome prize in my mailbox each week, especially before the internet. We didn't have the world at our fingertips in 1987, and salary information like this wasn't reported on all that often. Maybe once a year in spring training the local papers might list the payroll, but outside of big names salary news wasn't big news.

When "What They Make" came across my desk, I devoured the information. This was a new level of information I couldn't get from the backs of baseball cards, and here it was all in one place! 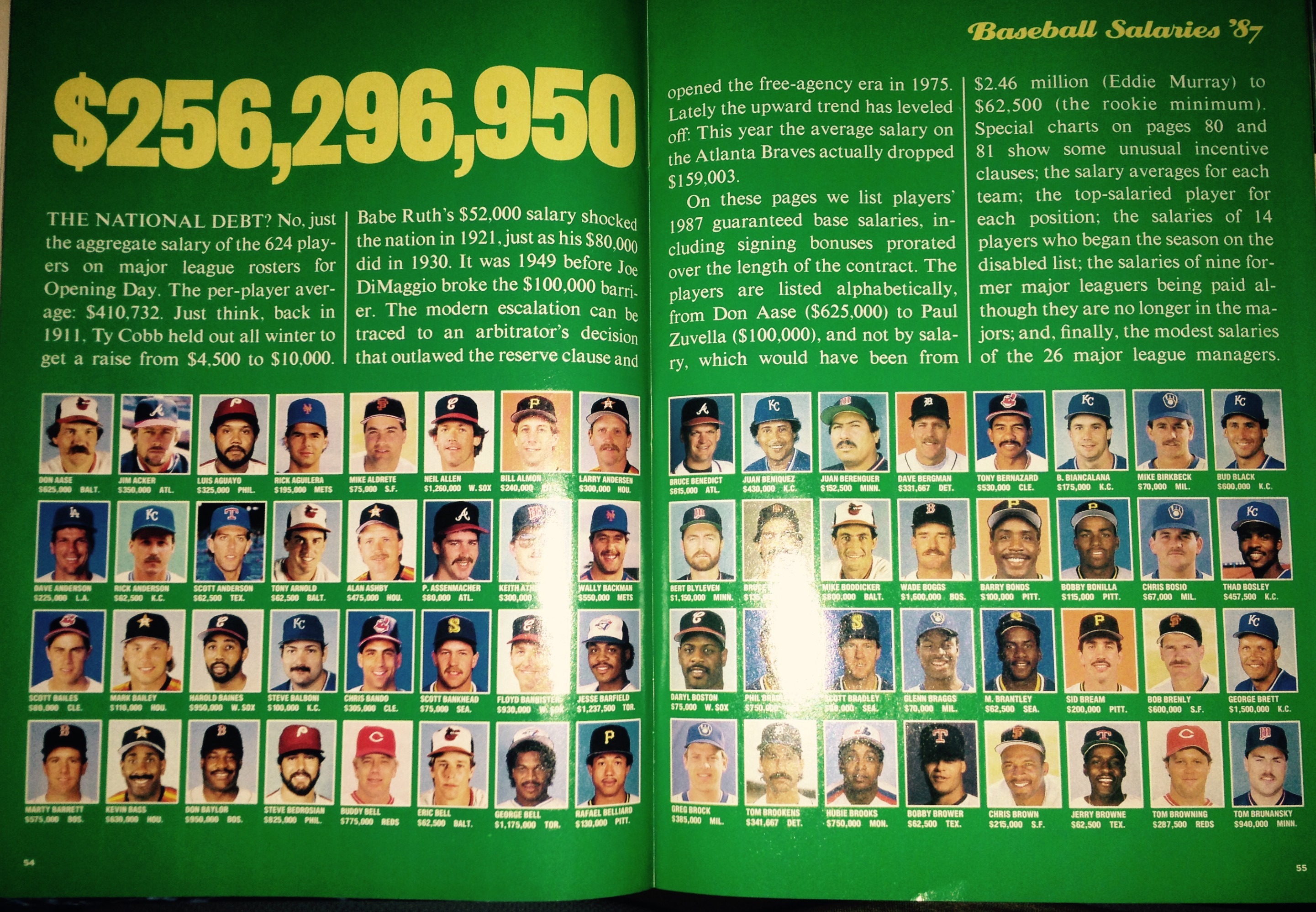 There isn't much "downfall of civilization" cries nor predictions of doom and gloom with rising salaries in this article. Though there is this wistful nugget:

Usually this meant sharing information among owners and refusing to make offers to free agents, which suppressed the markets for Tim Raines, Kirk Gibson, Steve Garvey and others. Collusion made Gibson a free agent in 1988, much to the Dodgers' benefit. But another way to lower costs was to lower the active roster limit of 25 players through Aug. 31, down to 24.

MLB owners employed a 24-man roster from 1986 to 1989, until the collective bargaining agreement in 1990 formalized the 25-man active roster.

The highest paid player in baseball on opening day in 1987 was Eddie Murray, who signed a five-year, $13.5 million contract in September 1985. Using SI's method of spreading a signing bonus evenly over the life of the contract, Murray made $2.46 million in 1987. He would become a Dodger two years later.

The highest paid Dodger in 1987 was Fernando Valenzuela, at $1.85 million tied with Jack Morris of the Tigers as the highest-paid pitcher in the sport. Other Dodgers making $1 million that year were Pedro Guerrero, at $1.52 million entering the fourth year of a five-year contract, and Jerry Reuss, at $1.05 million for 1987.

Reuss was released less than a week into the season, with the Dodgers eating a total of $1.35 million including his option buyout for 1988. That move opened a spot on the roster for veteran utility man Mickey Hatcher, 18 months before his World Series heroics.

Here are the Dodgers opening day salaries in 1987, per Sports Illustrated.

Baseball salaries weren't the only thing that made this Sports Illustrated issue a memorable one. There was Larry Mize winning the Masters with a 140-foot chip shot, plus Sugar Ray Leonard winning a shocking decision over Marvelous Marvin Hagler in Las Vegas.

There was also baseball insider Peter Gammons, laying into the Dodgers after their 0-5 start, following a 73-89 campaign in 1986 (they would also finish 73-89 in 1987) and shortly after general manager Al Campanis was fired after his terrible comments about African Americans in baseball on ABC's Nightline. Gammons ripped the Dodgers' poor draft record in the 1980s, including this tidbit:

"In the spring of 1980, scout Mike Brito, who signed Fernando Valenzuela, brought a little-known high school kid named Eric Davis to Dodger Stadium for a workout before a group of scouts, including [scouting director Ben] Wade," Gammons wrote. "To this day, Brito maintains that Davis put on a quite a hitting and baserunning show, but still the Dodgers ignored Brito's recommendation and let the Reds take Davis in the eighth round of the subsequent June draft."