Share All sharing options for: 20 years ago: Hideo Nomo signs with Dodgers

Strikeouts are the theme it seems for Friday the 13th, so it's only fitting that February 13 marks an anniversary of one of the great strikeout pitchers in Dodgers history. Not only did Sergeant Pepper teach the band to play on this date 20 years ago, but the Dodgers signed Hideo Nomo.

It was a minor league deal for the 26-year-old right-hander, but that was more a formality. Nomo received a signing bonus of over $2 million, and was the first Japanese star player to migrate to the big leagues.

"The Dodgers over the years have had remarkable pitchers--a great black pitcher named Don Newcombe, a great Jewish pitcher in Sandy Koufax, and a great Mexican pitcher by the name of Fernando Valenzuela," Vin Scully said in Nomo's introductory press conference, per Bob Nightengale of the Los Angeles Times. "So in retrospect, it's only right that we should have a great Japanese pitcher."

Nomo made his major league debut on May 2 in San Francisco against the rival Giants. After walking three in his first major league inning, Nomo settled down to pitch five scoreless frames with just one hit allowed, and seven strikeouts.

Though the game was in San Francisco, Nomo gave the Dodgers an advantage. Per Nightengale:

They erupted with cheers the moment Japanese pitcher Hideo Nomo emerged from the Dodger dugout, and as Nomo slowly walked to the mound, Section 12 truly realized the significance of every step.

"This is a very, very special day for our country," said Mitsuko Iwama, who took her son out of school for the event. "I wanted my son to see this because young people see him as a symbol of excellence.

"And that makes me proud."

That first season was a whirlwind for Nomo, or perhaps more accurately a tornado, with his elaborate, twisting windup that remains embedded in the minds of all who watched him pitch. 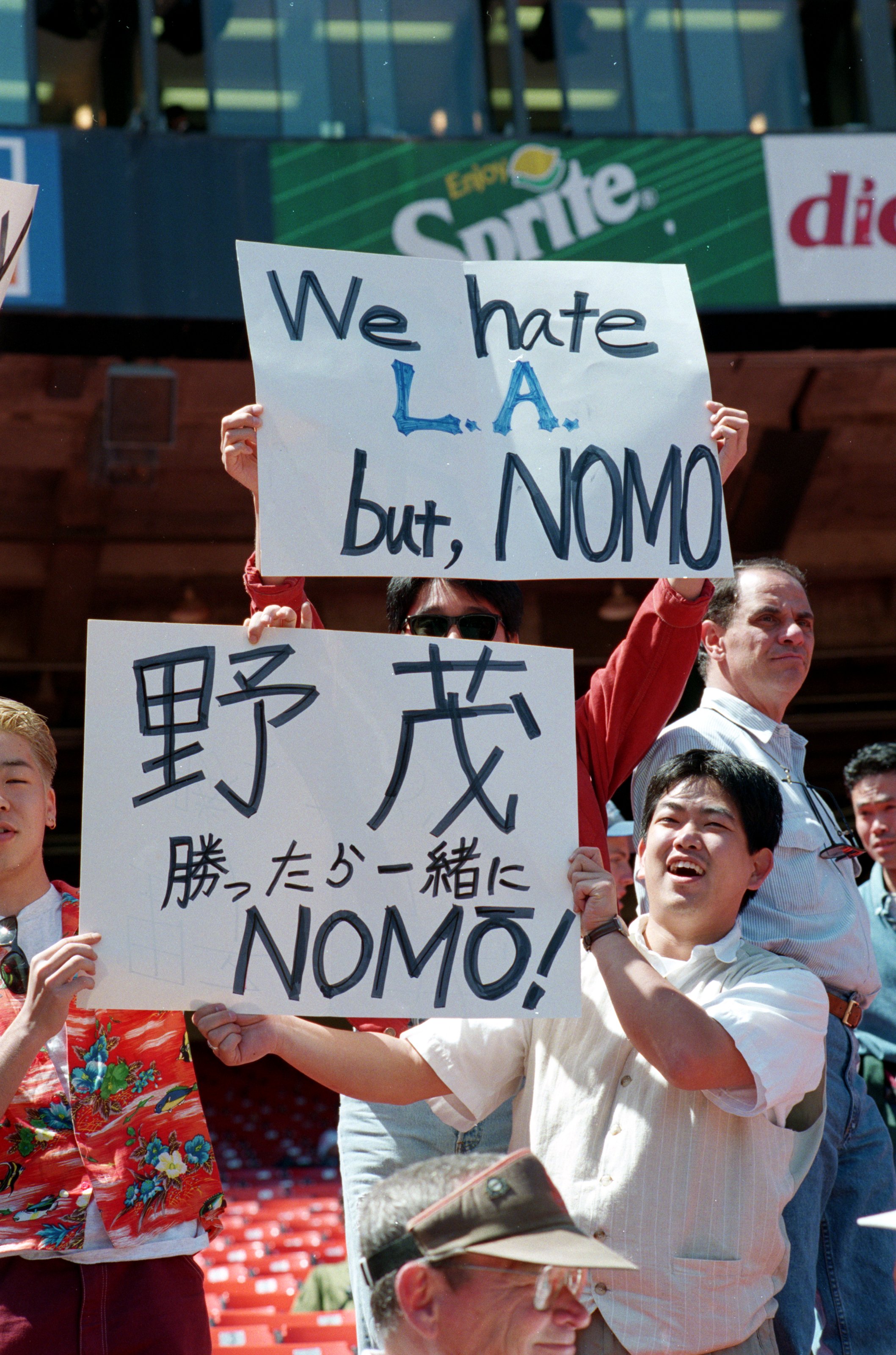 Even in San Francisco, fans cheered for the Dodgers with Nomo on the mound (Photo: Otto Greule Jr. | Allsport)

"His motion is different than anybody I've ever faced," Carlos Baerga said at the 1995 All-Star Game. "You've got to forget about the windup and concentrate on picking up the ball."

It took a while for major league hitters to pick up the ball.

He struck out 16 Pirates on June 16 in Pittsburgh, in only his ninth MLB start. The only Dodger to strikeout 16 or more in a game since then was Nomo, who struck out 17 Marlins in a 1996 contest.

Nomo took a 1.90 ERA into the All-Star break and started the All-Star Game in Texas as a rookie. He allowed seven runs in six starts in May, winning all six while striking out 60.

The only Dodgers pitcher to strikeout 60 in one month since was Clayton Kershaw, with 61 strikeouts in June 2014.

Nomo finished 13-6 in 28 starts in 1995 with a 2.54 ERA, a 149 ERA+, and led the National League with 236 strikeouts. Since moving to Los Angeles, the Dodgers have only had five pitchers lead the league in strikeouts: Sandy Koufax (four times), Don Drysdale (three times), Kershaw (twice), Fernando Valenzuela, and Nomo.

Nomo in 1995 was the closest thing to Fernandomania for the Dodgers have seen. He was a true must-watch player.

He did the unthinkable in 1996, pitching a no-hitter at Coors Field. One of two no-hitters in his career.

"Throwing a no-hitter at this place," Mike Piazza told The Times, "he should be canonized on the spot."

Nomo ended up pitching in 12 major league seasons, including six full seasons with the Dodgers in two stints. He struck out 703 batters in his first three seasons, 30 percent more than the next-highest Dodger (Don Sutton). Nomo finished with 1,918 strikeouts in 1,976 innings.

Nomo was a true joy to watch, and it all started 20 years ago today.

Speaking of strikeouts, on a Friday the 13th in 2012, in April, Aaron Harang set a Dodgers record with nine consecutive strikeouts against the Padres, finishing his night with 13 strikeouts.

Over at SB Nation, Grant Brisbee wonders when we will ever see another 300-strikeout pitcher. The last such season came in 2002, with both Randy Johnson and Curt Schilling reaching the milestone. To put that in perspective, even stretching out Kershaw's amazing 2014 season - with 239 strikeouts in 27 starts - adding in his six missed starts, his insane pace would have produced 291 strikeouts.