I finally got my hands on some 2015 Topps cards, about a week or so after Series 1 was released. The set is chock full of Dodgers stars, which will provide a familiarity to this review of a set that has made a few changes this year.

The most noticeable change is to the front of the cards, with a two-toned border of off-white around the top and blue around the bottom. This marks the first time Topps has been without an all-white border since the 2007 series. 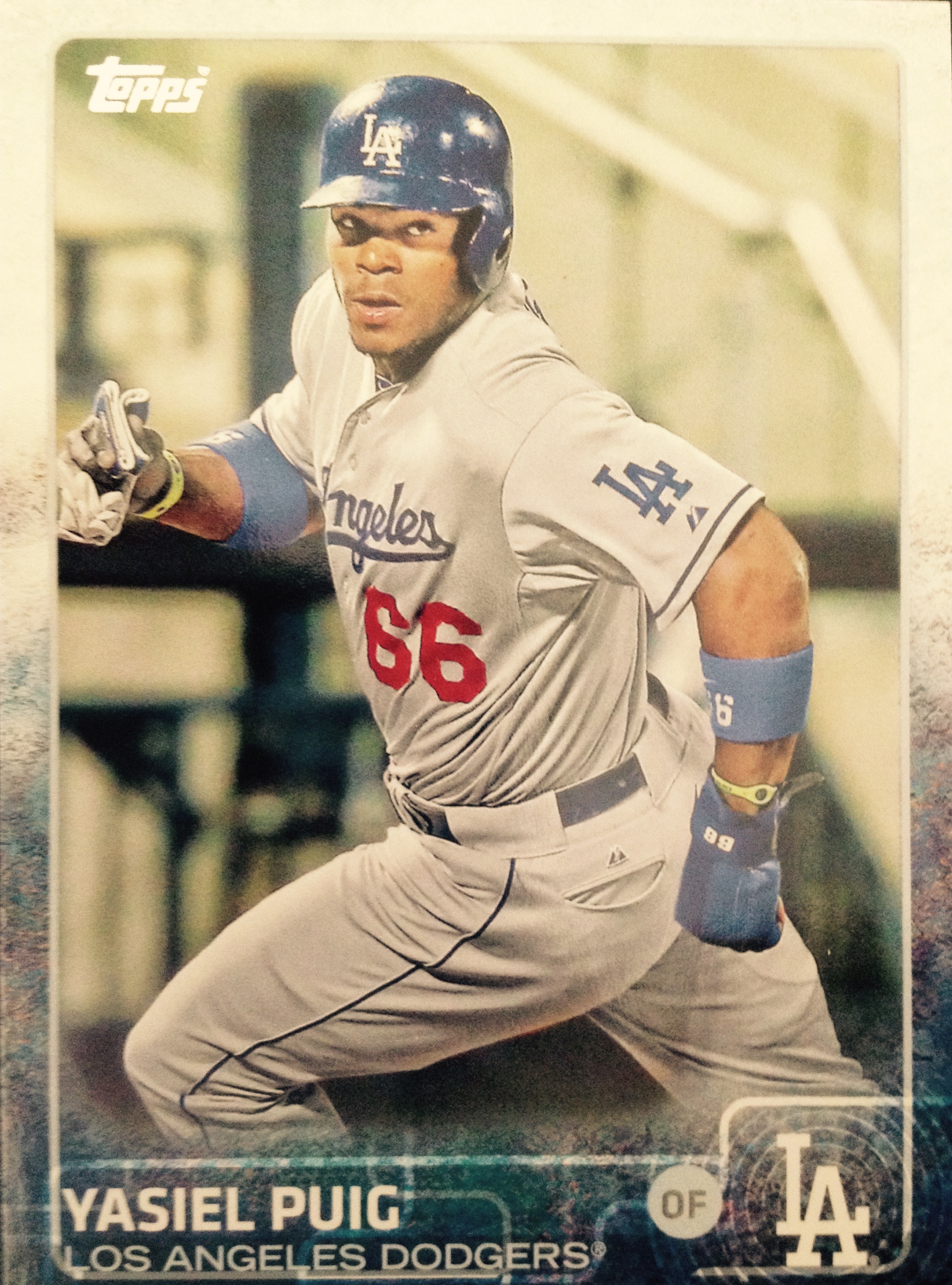 Puig is a prominent figure in this set, and not only because of his number assignment of 350. He was also featured on the packs and boxes for Series 1 as well.

Of those 350 cards, 12 are Dodgers, including 11 regular cards and one checklist. But unlike checklists of my youth, with lists on both sides of the card, these checklists have card lists and numbers only on the back, with some sort of highlight on the front.

In this case, the highlight is Clayton Kershaw's no-hitter on June 18 against the Rockies. 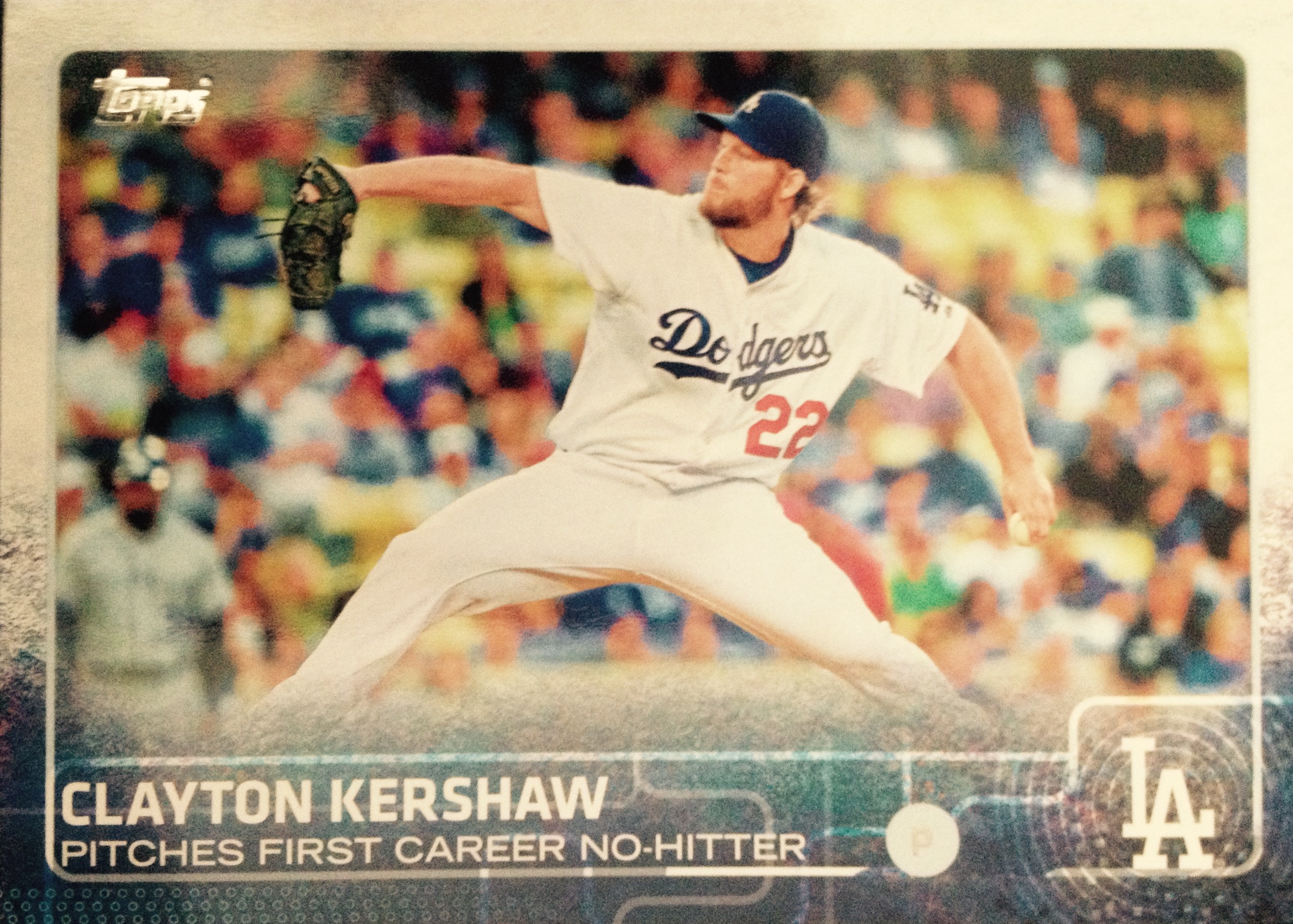 That is not the only Kershaw card in the set, with his regular-issue card at No. 100. Typically, the card numbers ending in 00 and 50 are reserved for stars, and Kershaw in the last four years has been 100, 400, and 600 in the Topps set, with only his 2013 card varying at No. 22, when Topps tried to assign card numbers matching uniform numbers for a group of players. 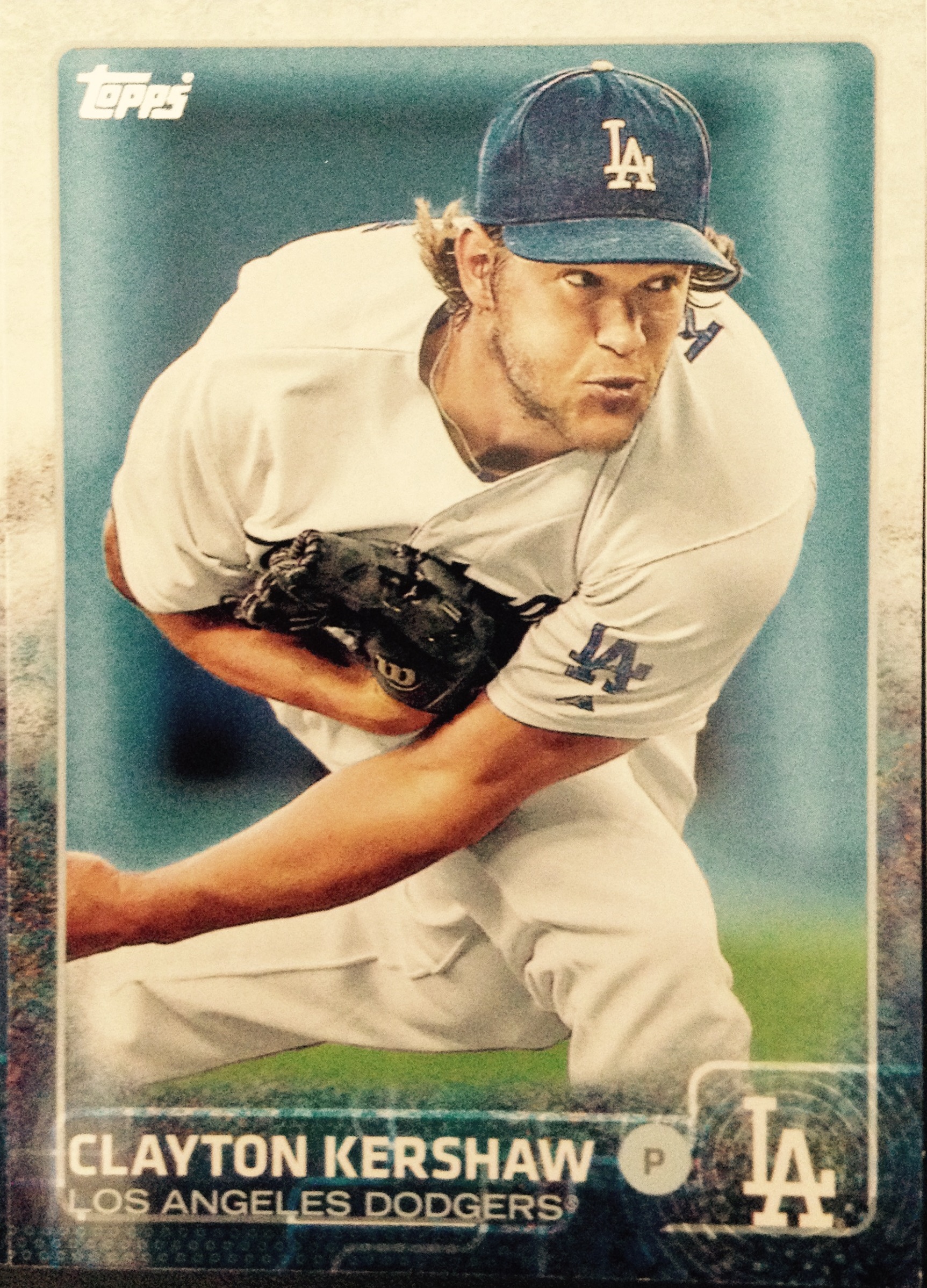 Looking at the back of Kershaw's card, we see the use of red ink and italics to denote league leaders. Kershaw's card is full of red. 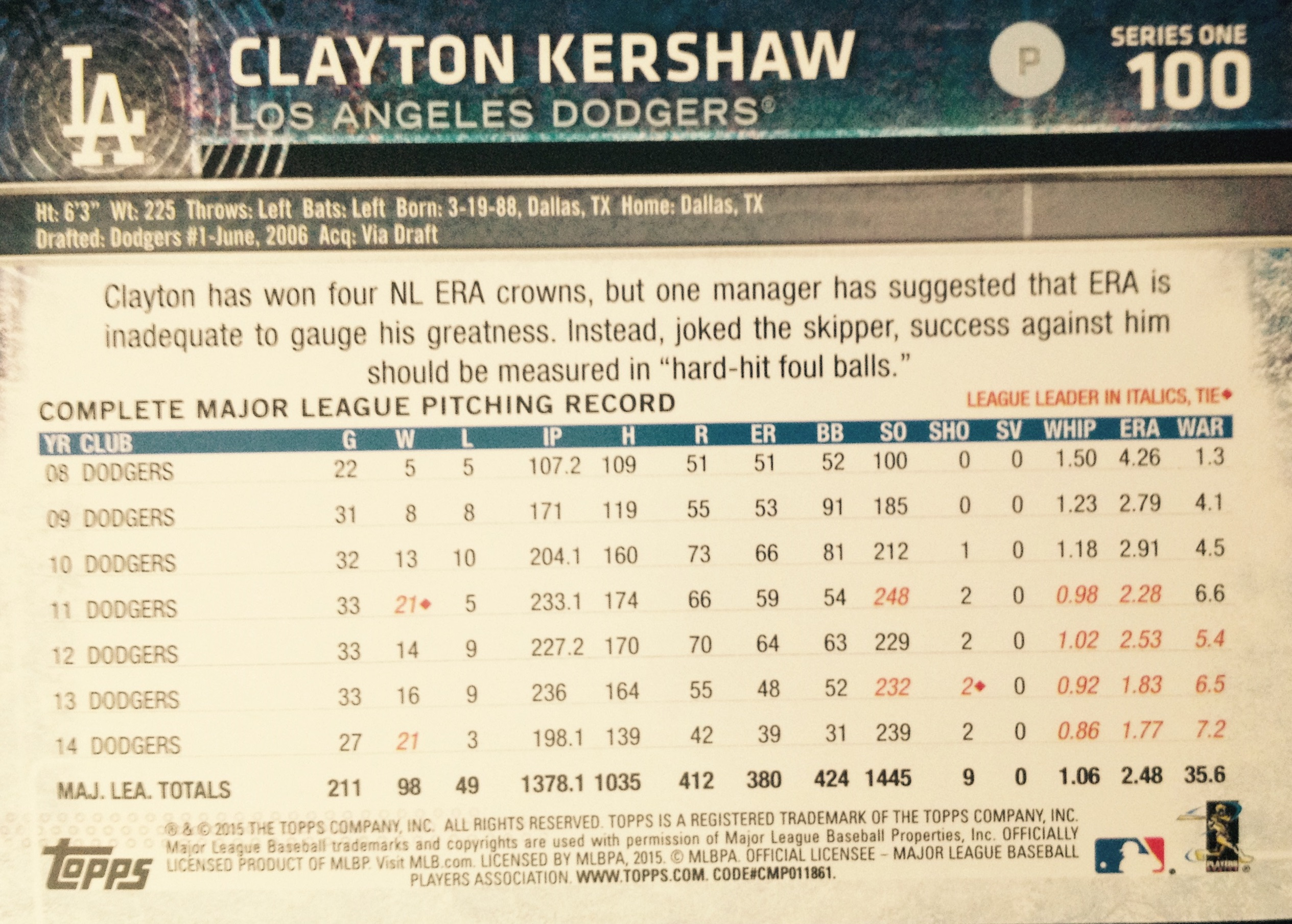 The back of Matt Kemp's card has some red ink, too, in his final regular Topps card as a Dodger. Look for Kemp to reappear later in the set, likely in the update series (after Series 2) in a Padres uniform. 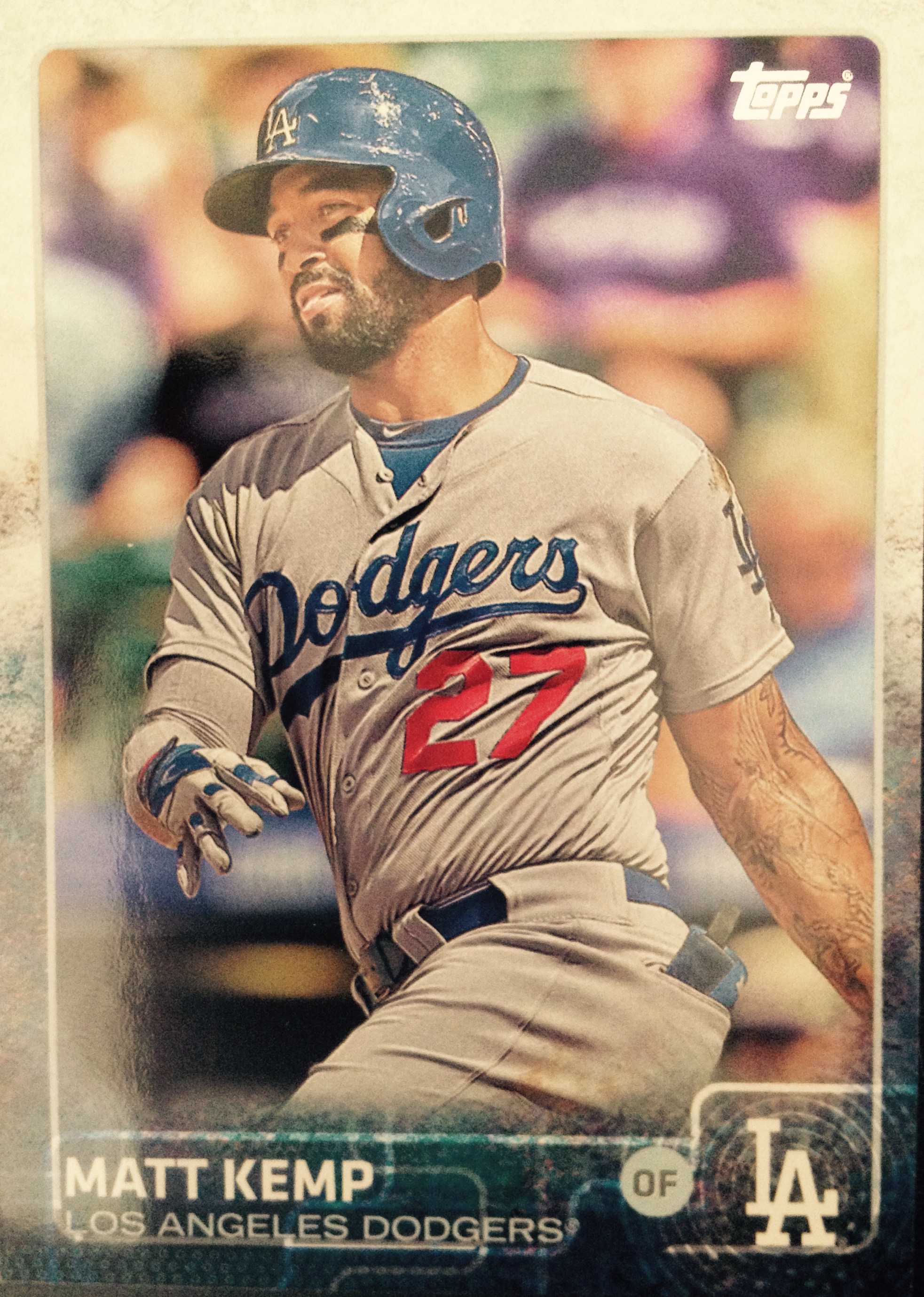 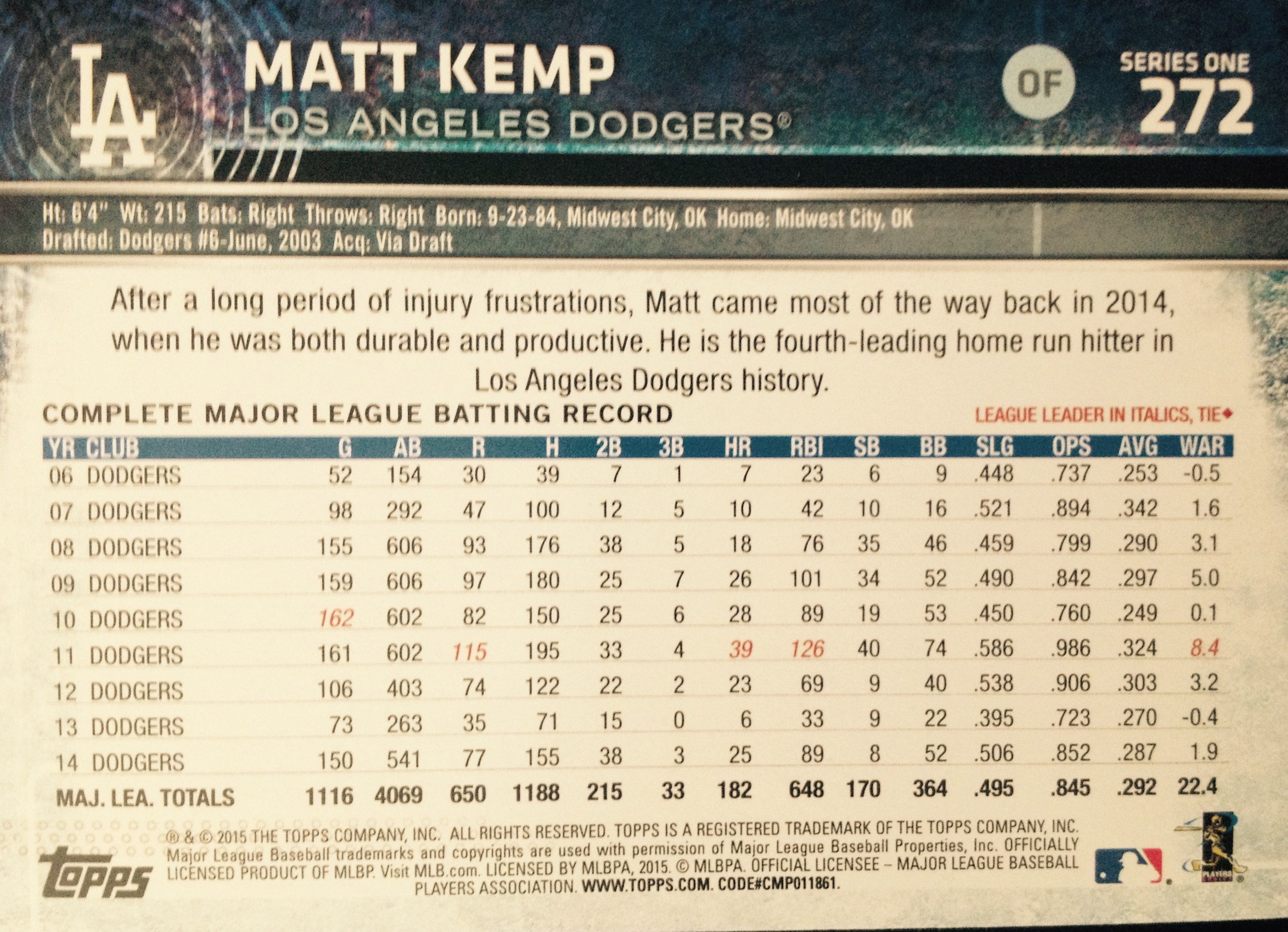 For those with their first regular-issue Topps card, an "RC" label for "rookie card" is added, as was the case with both Joc Pederson and Yimi Garcia. 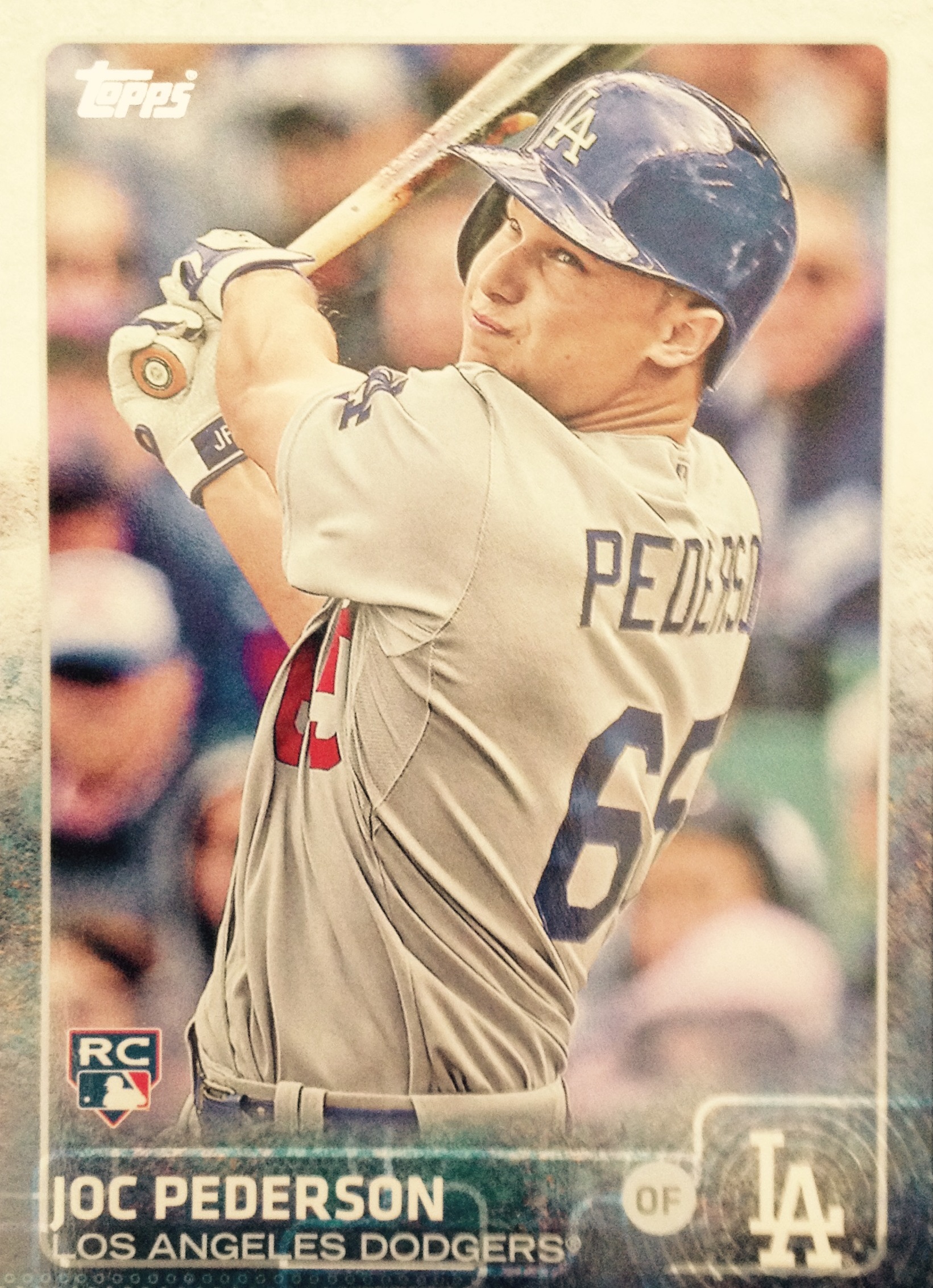 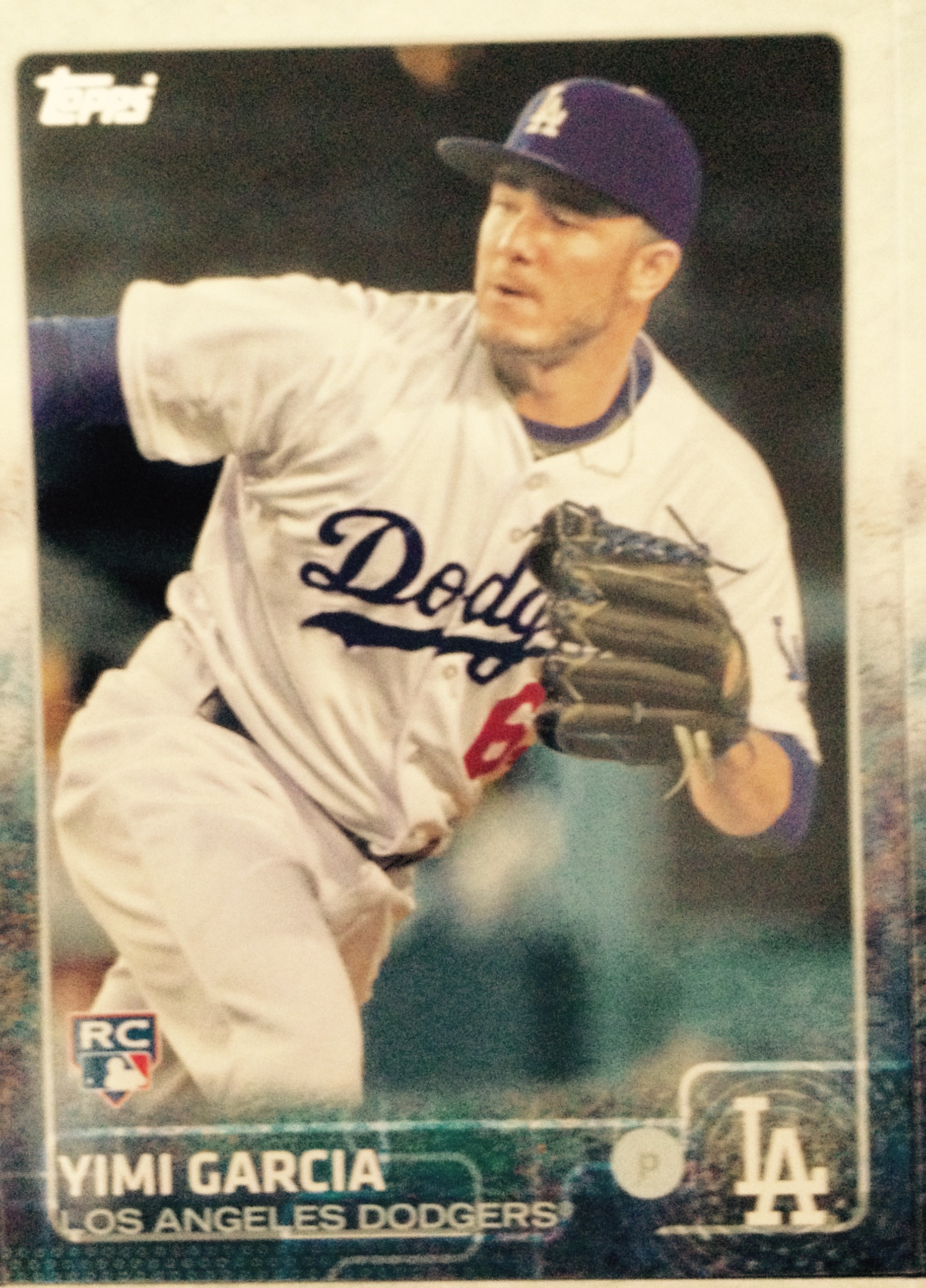 What is weird about the backs of both cards is the relative paucity of information. Only the major league statistics for each are shown, which consist only of cups of coffee in September 2014. Here is Garcia's card:

Contrast that with Puig's card, which shows has parts of two seasons in the minors, a longtime staple of Topps cards. 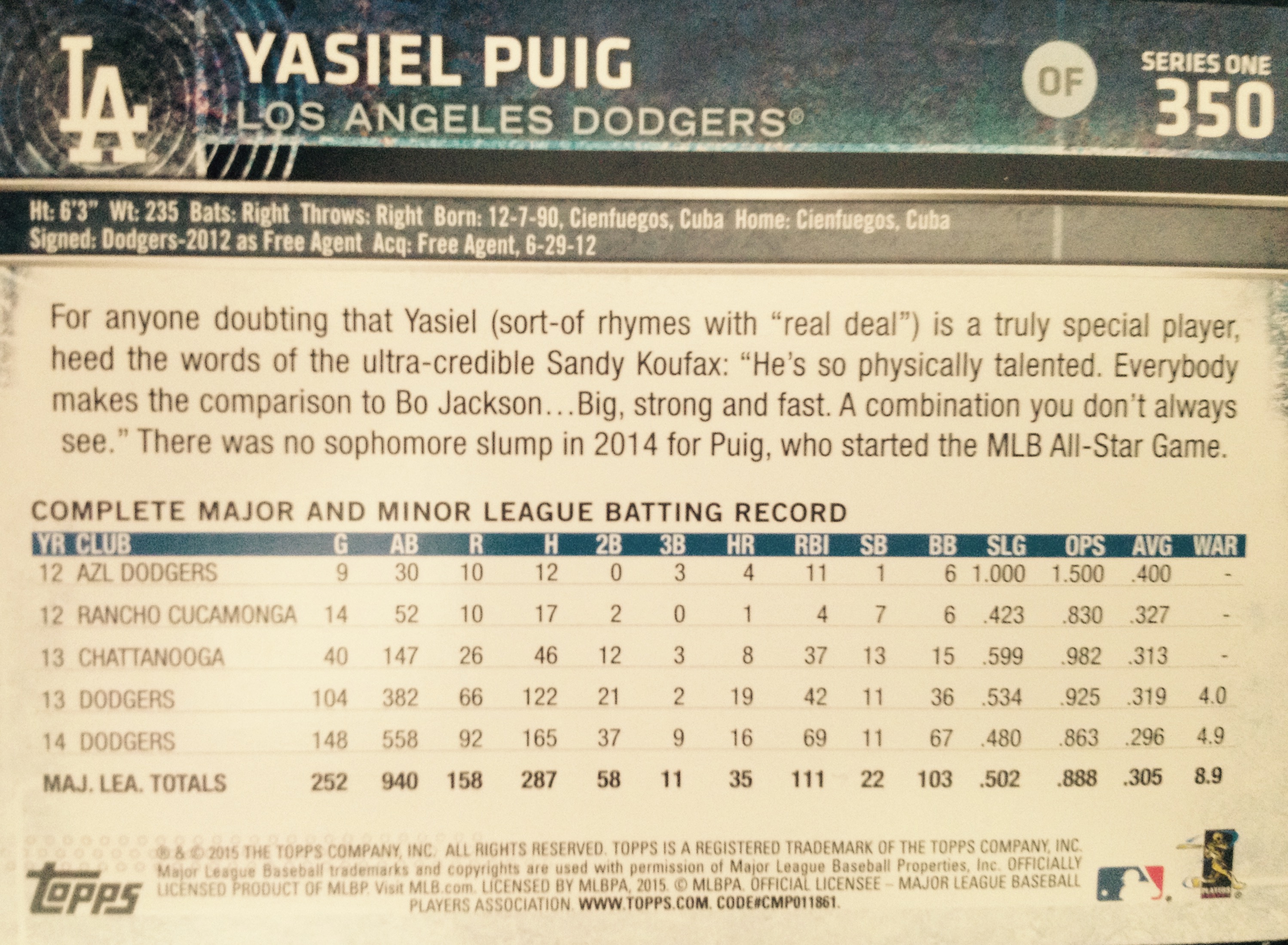 Though as the years add up, the minor league years tend to disappear and the Topps font gets a little smaller. Like for depicting the 13 major league seasons of Carl Crawford. 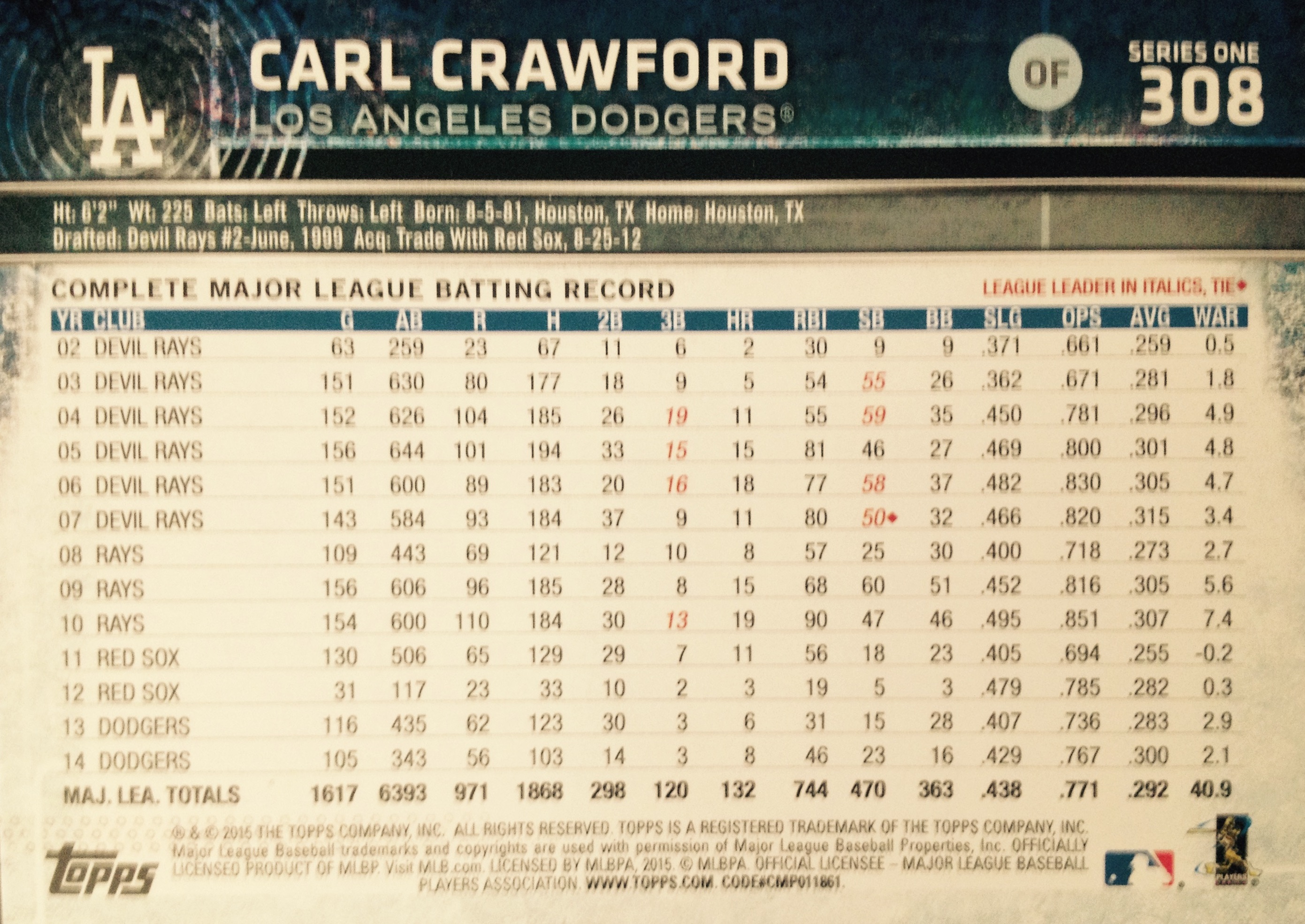 Ten of the 11 regular Dodgers cards are laid out in portrait style, but the best picture of all might be the one in landscape layout, of Andre Ethier sliding into third base. 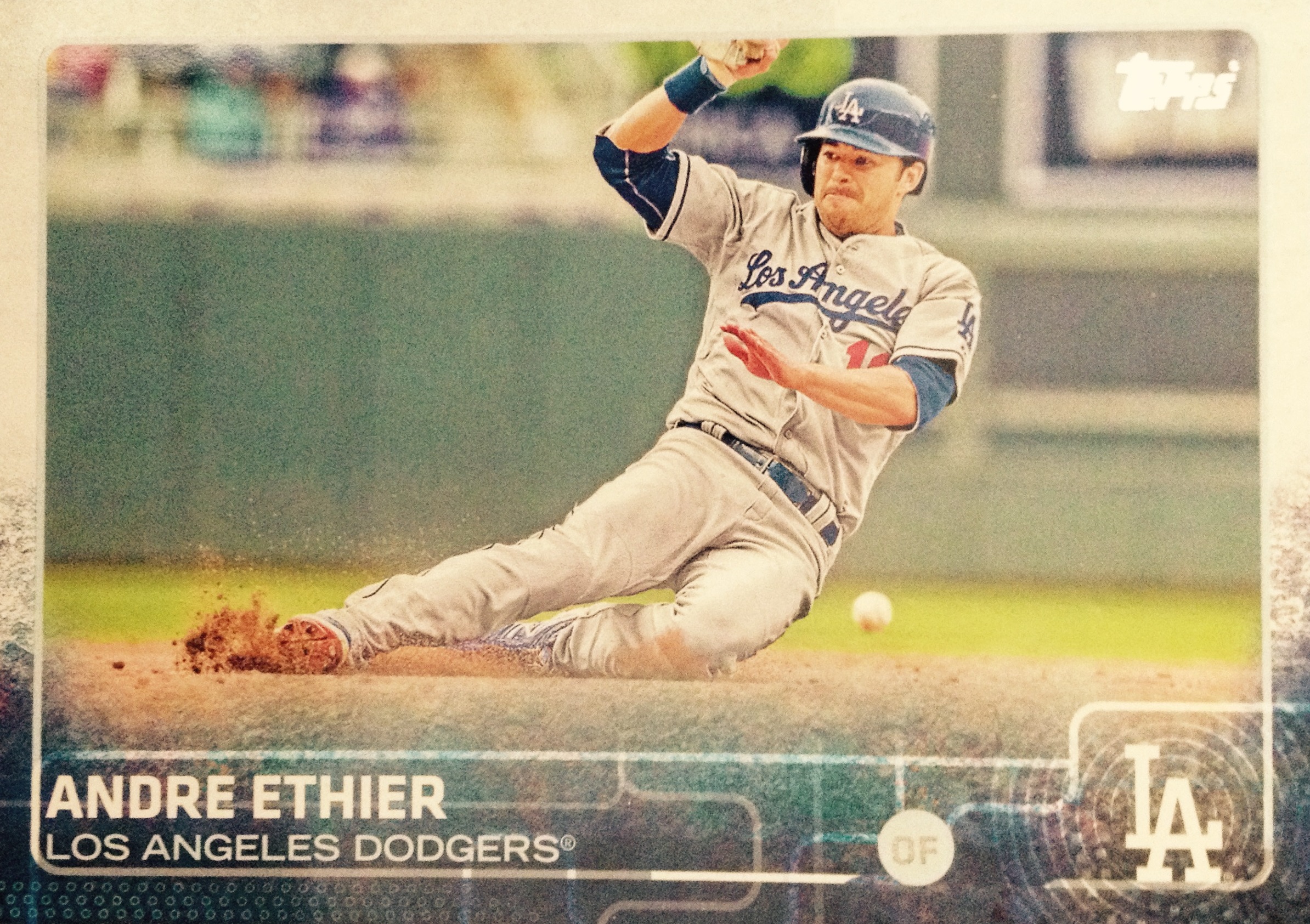 Wins Above Replacement returns as a stat on the backs of cards for a second year, after debuting in the 2014 set. The FanGraphs version of WAR is used, but with a slight rounding difference in some years. For instance, Hyun-Jin Ryu is listed on his card with 3.1 WAR in 2013, but on FanGraphs is shown with 3.2 WAR. 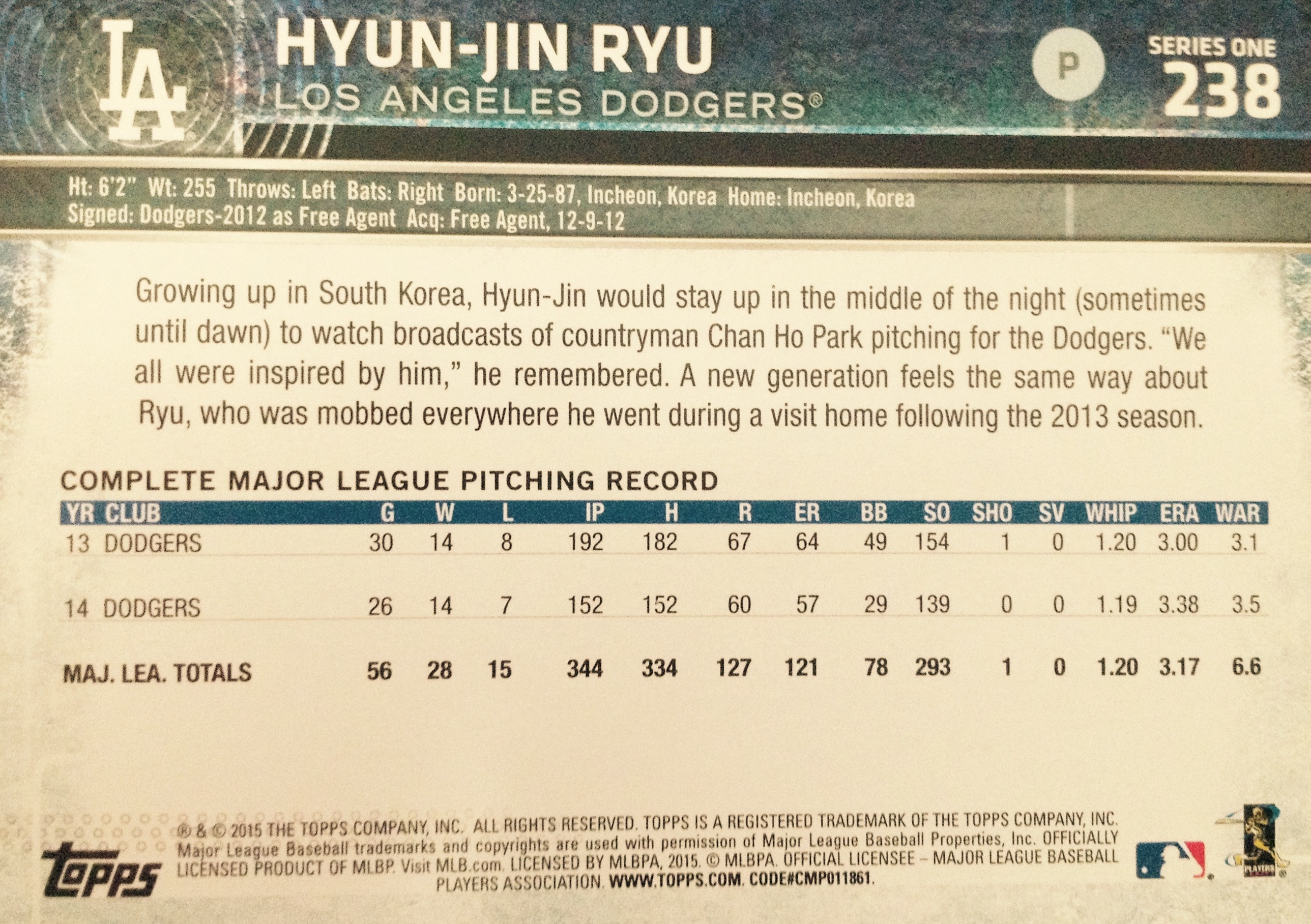 All in all, like the 2015 set. The colorful border breaks a visual rut of the last few years.

Series 2 is expected to be available in June.