I’d like to introduce a new series that I will be running throughout the Spring that will feature a combination of in-person observations and video analysis of top prospects in the 2015 Draft. This past weekend, I traveled down to Baton Rouge to take in opening weekend for Louisiana State Baseball. Perennially a college baseball powerhouse, this season looks no different, as LSU flashed overwhelming team speed and defense, as well as some intriguing arms for both the 2015 and 2017 drafts.

Below are the most notable names from the weekend:

The most famous name on LSU, if not all of college baseball, Bregman answered one of the bigger questions on him entering the 2015 draft. For me, Bregman can unquestionably handle shortstop at the major league level, where most reports expect him to move across the diamond; the Albuquerque high school product was drafted in 2012 in the 29th round as a second basemen by the Boston Red Sox. Listed at 6’0", 186 pounds, Bregman appears smaller than advertised, but he has a strong arm and shows adequate range thanks to his first step quickness and anticipation.

Offensively, I’m not as high on Bregman as most. He features a compact, short swing and generates decent bat speed, and he made a lot of quality contact over the weekend. However, he’s rarely flashed the power he showed as a freshman, and that one season may have inflated his actual offensive profile. Bregman has decent stolen base totals in college, but the I clocked him around 4.3 home to first, and his speed should be no more than average for the position.

Players that can play shortstop will always be drafted high, and Bregman is no exception. However, I just don’t buy into the Pedroia comps and instead see him more in the Stephen Drew/Jed Lowrie mold; capable of putting up solid seasons on offense and defense, but rarely plus. There’s value in a guy that can hold shortstop above water for several seasons, and Bregman will be drafted highly for that reason. I just don’t see star power in him.

Stevenson put himself on the map over the last two summers and last spring, where he hit .335 as a sophomore, and Baseball America made him their 87th ranked college prospect for the 2015 draft this preseason. Stevenson’s calling card is his speed, and he displayed this above-average tool on the basepaths and in center field this weekend. Stevenson showed the range to play center field at the major league level, and tracked the ball well in the air, though for his defensive reputation, he showed some misreads on hard hit line drives in the gap. Stevenson’s arm is slightly below average but roughly in line with what you’d expect from a player of similar stature. LSU lists the pure left-hander at 6’0", 184 pounds.

It’s hard to see Stevenson’s swing leading to similar high batting averages in the pros. He flattens his bat out in his load and has a fairly grooved swing with little loft potential. His game will be about putting the ball on the ground and legging out hits from the left side. He looked uncomfortable with left handed pitchers this weekend, and platooning would further hamper his value.

If you’re drafting Stevenson, you are buying into his defensive ability in center and the thought that a few adjustments to his swing might tap into a bit more gap power. I believe he’s a more valuable play for teams after the fifth round, where his SEC pedigree and speed give him more appeal than his questionable hitting tool would before this round.

Ranked seven spots behind teammate Stevenson on Baseball America’s pre-season list, I came away more convinced of Laird’s prospect status over the weekend. Built on the lean side (listed 6’2, 173), Laird plays right field in deference to Stevenson but should be drafted as a centerfielder and showed the tools to play there in the pros. Laird, made several impressive plays to both the gap and the line to rob hits over the weekend and flashed the speed, anticipation, and first step quickness you’d like to see in a centerfielder. I clocked Laird at 3.93 on one home to first trip, and Laird looked even faster under way on the basepaths.

Laird’s swing and plate approach is more typical than his teammate. He has a quiet set-up, proper load, and a solid swing plane. The left-hander's bat speed is average to slightly better, and he will get his lower half involved in his swing. Laird should have gap power at the pro level, but he will have to work to add more strength and effective bulk to his frame. He has a patient approach and understands his offensive profile is more effective when on base. Without more power, Laird’s ceiling is that of a fourth outfielder that can handle centerfield. I would prioritize Laird ahead of Stevenson in my draft order because of his superior hit tool, but similarly, his greatest value may be fifth round and later. 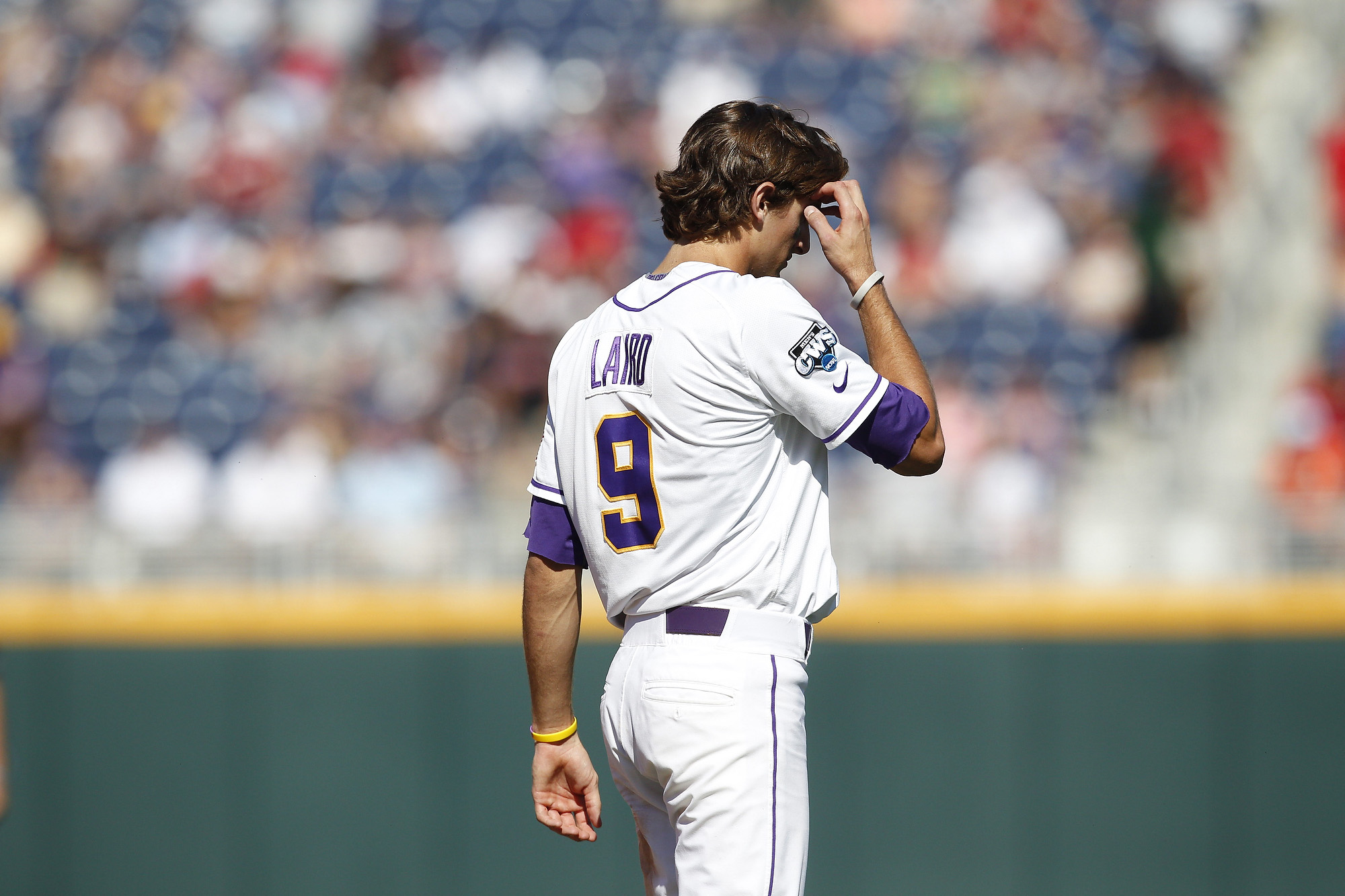 Louisiana State’s success this season hinges on a quartet of underclassman arms, and all four showed pro potential over the weekend. Files these names away for future drafts:

Jared Poche, LHP (sophomore): I’m a sucker at times for aggressive left handers that get the most out of a modest profile. Poche impressed last season in the SEC, and this weekend displayed a repertoire better than previously advertised. Poche, though undersized, has an athletic build (6’1", 207) and held his stuff deep into his outing, impressive for the cooler temperatures on Friday and the adrenaline of opening day. Poche attacked both sides of the plate with a running fastball that topped at 91, sat around 88, but could still touch 90 in the later innings. The southpaw mixed in a solid breaking ball and change, but stood out for locating his fastball on the edges of the zone. Poche works very fast and displays a competitive demeanor on the mound. He won’t be the highest rated prospect in next year’s draft, but his profile has succeeded at the pro level before, and he reminds me of the Cubs’ Travis Wood.

Alex Lange, RHP (freshman): Lange’s star was on the rise this pre-season with reports of hitting 96 mph in practice and a shot to pitch on Friday nights as a true freshman. He started Saturday this weekend and immediately flashed his power arm with a first pitch 95 mph fastball. Lange didn’t hold this velocity through the start, and settled in at 91-93 in the second inning, but cruised through five innings. Lange’s hard low 80’s slider was equally impressive, as was his ability to throw strikes with both pitches. He has an impressive, pro-ready frame (6'3", 198), and the athleticism to start. It’s not presumptuous to suggest that Lange is on the shortlist for top overall prospect in the 2017 draft.

Jake Godfrey, RHP (freshman): LSU’s "other" pro-bodied freshman starter (6'3", 215), Godfrey was rougher around the edges and fought his control throughout his Sunday start. Godfrey reached 94 mph in the first inning but setting in at 90-91 for his brief start. Godfrey’s big curve flashed potential out of his near overhead arm slot. Godfrey will need to smooth out his delivery over the next few seasons, but has first-round potential. (Godfey was drafted in the 21st round last June by the Atlanta Braves as an outfielder.)

Jesse Stallings, RHP (redshirt freshman): The Tigers’s closer over the weekend, the redshirt freshman showed decent arm strength with a 93-94 mph fastball, and kept hitters off balance with a straight change. Stallings is coming off of Tommy John surgery, and has the potential for even better future velocity.