It’s hard to believe in a year that Joc Pederson had a milestone 30-30 season in Triple A that he’d drop a few spots in the Dodgers prospect hierarchy, but that highlights the elite nature of the top of this system. Pederson continued to pile up counting stats and by virtue of his readiness allowed the organization to jettison one of their high-priced outfielders in Matt Kemp to make room for him at the big league level.

While Pederson has every bit the star upside of his two counterparts atop the food chain, he might have the biggest red flag in his strikeouts. Ultimately, the difference between Pederson becoming a multi-year All-Star and as a useful regular will come down to the amount of contact he makes at the next level.

For most scout sites/blogs I read, the hit tool is generally scored based on the batting average you would forecast for the player. Given that Pederson is a career .286 hitter in the minor leagues, it seems fair on the surface that MLB.com would give him a 55 present hit tool on the 20-80 scouting scale. However, Pederson’s strikeout rate has grown steadily at each of the last three minor league stops, culminating in a whopping 28.9% in a brief major league cup of coffee. So beyond BABIP, where is the disconnect between Pederson’s scout scores and posted averages and his significant strikeout rate?

Judging his swing, the scouting sense would seem to side with the 55/60 grade hit tool. Pederson is short to the the ball and shows good extension through his swing producing loft with his swing plane. He has a long stride and has worked to clean up a slight waggle/wrap in his load that could disrupt his timing. He generates a fair amount of torque with his core and lower body, aiding his power. His swing can get long on occasion, and because of his long stride, he can get caught to heavy on his front foot when fooled by off-speed pitches.

None of the faults in his swing would suggest he can’t hit for a high average. Most likely, his strikeout rate is a function of his overly patient approach. Pederson is almost disciplined to a fault, posting an 18.1% walk rate at the Triple-A level. He knows what pitches he can drive and tends to lay off balls balls away, instead looking to pull everything on the inner half.

Because of his patient approach, his raw power is essentially the same as his in game power, and it’s real. He’s not an indiscriminate hacker and will wait for the right pitch. While The PCL likely inflates his counting stats, Pederson has the upside of a .200+ ISO and is capable of a 20-doubles, 20-homer season right now.

The rest of Pederson’s profile is more rosy. Pederson flashes above average speed and it plays up in the outfield thanks to his instincts. He isn’t just the best center fielder on the Dodgers’ roster but should be a general positive defensively. Pederson will swipe bags and will continue to run at the big league level, but his conversion rate was just average the last two years in the minor leagues.

Everything about Pederson’s profile rounds out to a net positive player in all categories. Early on, Pederson will likely contribute closest to his peak potential in fielding and baserunning, but should also be a net positive on offense thanks to his pop and on-base percentage. At the lower end of his realistic scenario is a one- or two-win player early on. His future upside, however, is considerably higher, and Pederson only needs game experience at the top level to start to tap into that star potential. 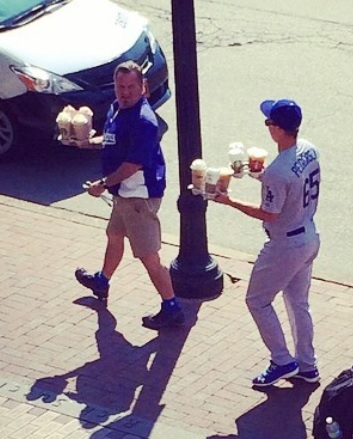 The critical concern is the strikeout rate, and we have a few unfriendly reminders to look at that not all top prospects reach their potential because they fail to make enough contact at the big league level. The dangerous parallel I could envision for Pederson is that of Colby Rasmus. Coming through Springfield, Rasmus was one of the best five-tool players I’ve seen personally in Double-A. Rasmus didn’t post near the strikeout rates that Pederson has posted, but his contact rate was alarming enough that Rasmus struggled to make enough contact to please the Cardinals’ brass and he never became the center fielder of the future so many projected for him on the farm.

While Rasmus has still become a useful major leaguer, his case should be considered when we look at Pederson’s floor. Joc simply out-produced his strikeout rate and climbed the ladder faster than perhaps his plate approach was ready for. While I still believe he can drop the strikeout rate to an acceptable rate around 20% — he’ll only be 23 in April — it will require patience by the Dodgers to allow him to work through this learning experience. The key is that Pederson can still be valuable offensively if he hits .230 next year, if it comes with the walks and home runs his profile suggests.

Pederson faces some competition for his roster spot despite being the only true center fielder on a team that has shifted a higher organizational priority to defense. Learning how pitchers will attack him at the major league level and allowing for himself to expand his plate approach will lead in time to Pederson reaching averages around .275-.280, with on-base percentages and slugging percentages in the All Star range. That’s not likely to happen in 2015, but no less, Pederson is capable of providing a net positive to the team’s goal of reaching the postseason and beyond; he might just require more patience than your typical elite prospect.