Share All sharing options for: Dodgers spring training observations, one week in

GLENDALE, Ariz. -- The Dodgers finally get their spring training camp fully underway on Thursday with the first full squad workout at Camelback Ranch. After about a week, here are some of my observations from Dodgers camp:

Injuries are minor ... for now

Technically, closer Kenley Jansen had surgery before camp started so his doesn't count as a spring training injury, though his loss will be felt throughout the first 4-6 weeks of the regular season as he recovers from foot surgery. The other injuries for now are minor — Zack Greinke getting a "lubricating injection," something we were told he has had in the spring for at least three years running, and Hyun-Jin Ryu held out a day because of back tightness — but serve as reminders that pitching depth is sorely needed.

The Dodgers have already added three pitchers since camp started, and potentially four depending on how you count David Aardsma, who wasn't technically announced as a minor league signing until reporting day. But much like when the new front office took over in November, the Dodgers have been busy adding incremental upgrade attempts wherever they can. The highlight is Brandon Beachy, who is coming off two Tommy John surgeries but was once really good. He gives the Dodgers a second-half rainy day fund, and with a guarantee of only $2.75 million didn't break the piggy bank to do so.

Because of the timing of the moves and the availability of the 60-day disabled list, the Dodgers were able to turn Chris Withrow's roster spot into both Beachy and Dustin McGowan. They placed Withrow on the 60-day DL when Beachy was signed on Saturday, then two days later placed Beachy on the 60-day DL when McGowan was signed. This is not meant as a "let's praise everything the new front office does" compliment, but rather just a nice use of timing and roster minutiae that I happen to love.

I can't count how many times [correction: I could count if I wanted to, but the effort would prove far too tedious] manager Don Mattingly has deflected almost any roster-related question by reminding us that spring training lasts six weeks and there will be plenty of time to decide such a thing.

Once you pop, you can't stop

With new director of player development Gabe Kapler implementing nutritional guidelines and overhauling meals across the Dodgers minor league affiliates, a health craze is afoot (I hope to have more on this later this spring). It has also reached major league camp, which means no more soda and tea* in the cafeteria. Not that players, who are generally in very good shape to begin with, were mainlining sodas at the rate of say, a baseball writer, but there are now healthier beverage options for Dodgers players, to go along with heavily organic fare.

*"There is tea," non-roster infielder Buck Britton assured me, "but it's organic tea."

Even though camp is six weeks (only five weeks left now!), I am having a hard time envisioning a scenario that has Alex Guerrero on the opening day major league roster, unless he can convince the team brass that he is defensively versatile enough to handle shortstop and other positions if necessary. Guerrero cannot be sent to the minor leagues without his consent, so unless he makes the team he would either be traded — and can opt-out of his contract after a year — or released, with the Dodgers eating the $14 million remaining on his contract.

Aside from new reliever Chris Hatcher attempting to wrest the title of best beard away from Scott Van Slyke...

...the most notable hair-related issues in camp are both Zack Greinke and Brandon League channeling their inner-Samson to summon strength for 2015 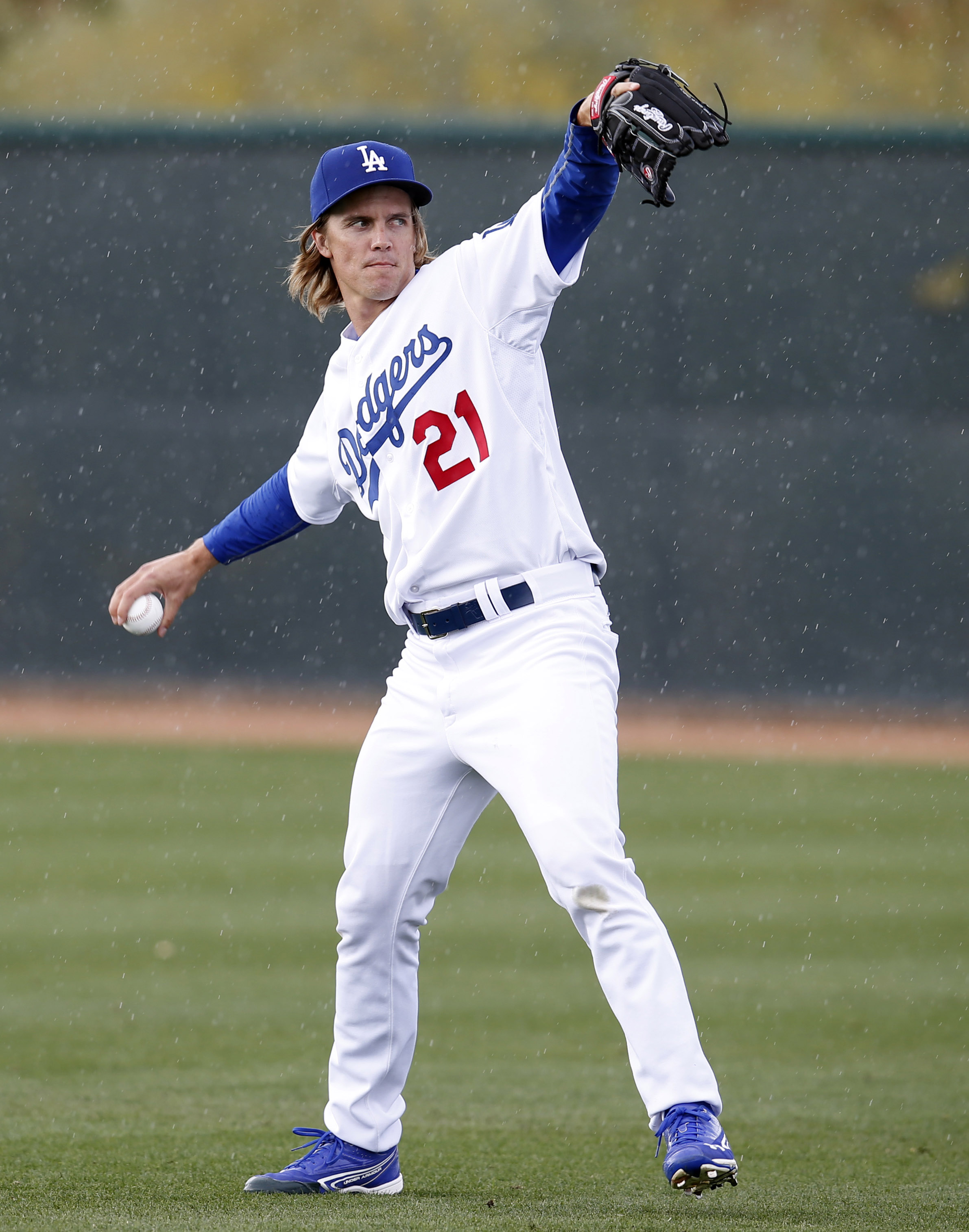 There will be 61 players in camp once the Dodgers start full squad workouts on Thursday — unless someone gets signed tonight or in the morning — and all 61 arrived on time, including every position player at least one day early, several already here for a week or more. It might not seem like a big deal — after all, mandatory reporting day was Wednesday, and as long as a player shows up ready to work there should be no problem — but chalk up reporting early under "things I like," along with managers wearing cleats and players running on the warning track during spring training games.

My stabs in the dark, as of right now...

Joc Pederson will be the opening day center fielder for the Dodgers, and Andre Ethier will start the season on the bench. The Dodgers will accommodate Ethier with a trade in the season's first month.

For what it's worth, Jimmy Rollins has Matt Kemp's old locker, the first stall on the north side of the clubhouse.

For those keeping track, yes Ali Solis — who left camp on the first day of workouts over a contractual issue — will count as an old friend.

There aren't many crueler combinations of words than "tomorrow, the clubhouse opens at 7:15 a.m." (for those wondering the normal time is 8 a.m.).

Sandy Koufax is back in town, the Dodgers announced today. Thursday should be quite interesting at Camelback Ranch.