One of the biggest weaknesses facing the Dodgers down the stretch and entering the off-season was starting pitching depth. Andrew Friedman and company addressed this issue a few times over with trades and acquisitions, including landing Joe Wieland as part of the Matt Kemp deal. While Wieland is unlikely to mount a challenge for the opening day rotation, he gives the Dodgers a better alternative to the likes of Matt Magill and Carlos Frias as a spot starter, and just maybe, he has an outside chance of carving out a future role as a multiple inning reliever.

Had he not undergone Tommy John surgery in 2012, Wieland would not have made this list this year. He was ready for the majors then, but has taken a long track back to pitching professionally, finally returning to the Padres at the end of last season. His samples are far too small to compare the post-surgery Wieland to the pre-surgery pitcher, but Wieland’s repertoire wasn’t likely to suffer from an injury layoff.

Wieland primarily features three pitches that may flash average but won’t overwhelm anyone. His fastball was actually up a tick from his pre surgery numbers, sitting around 91 mph, and he could run his fastball as high as 93 mph up in the zone. The pitch doesn’t feature much life, but he commands the pitch as well or better than any Dodgers prospect and he knows how to change hitters’ eye levels.

Wieland is one of the few Dodgers’ prospects to feature a pure curveball, and he can throw it a couple of ways. The break on the curve is generally 12-to-6, and he mixes between a sharp breaking curveball down in the zone, and a bigger bender as a get-me-over pitch early in counts. Like the fastball, he demonstrates good command of the pitch.

Wieland’s change-up has been an effective pitch for him in his limited major league career, but the pitch’s effectiveness likely comes from it’s difference in velocity versus the pitch’s action. Wieland throws it with good arm speed and generates some sink on the pitch, but he did not show as great of command on the pitch in outings I watched back and he had a tendency of leaving the pitch over too much of the plate.

As you’ve likely gathered, Wieland’s command allows all of his average pitches to play up. Wieland can pitch backwards to mix up looks for hitters or change eye levels between the curveball down and the fastball up. He works with little margin for error as a right-hander with below average velocity and movement, but for the most part, keeps hitters off sitting on his fastball. 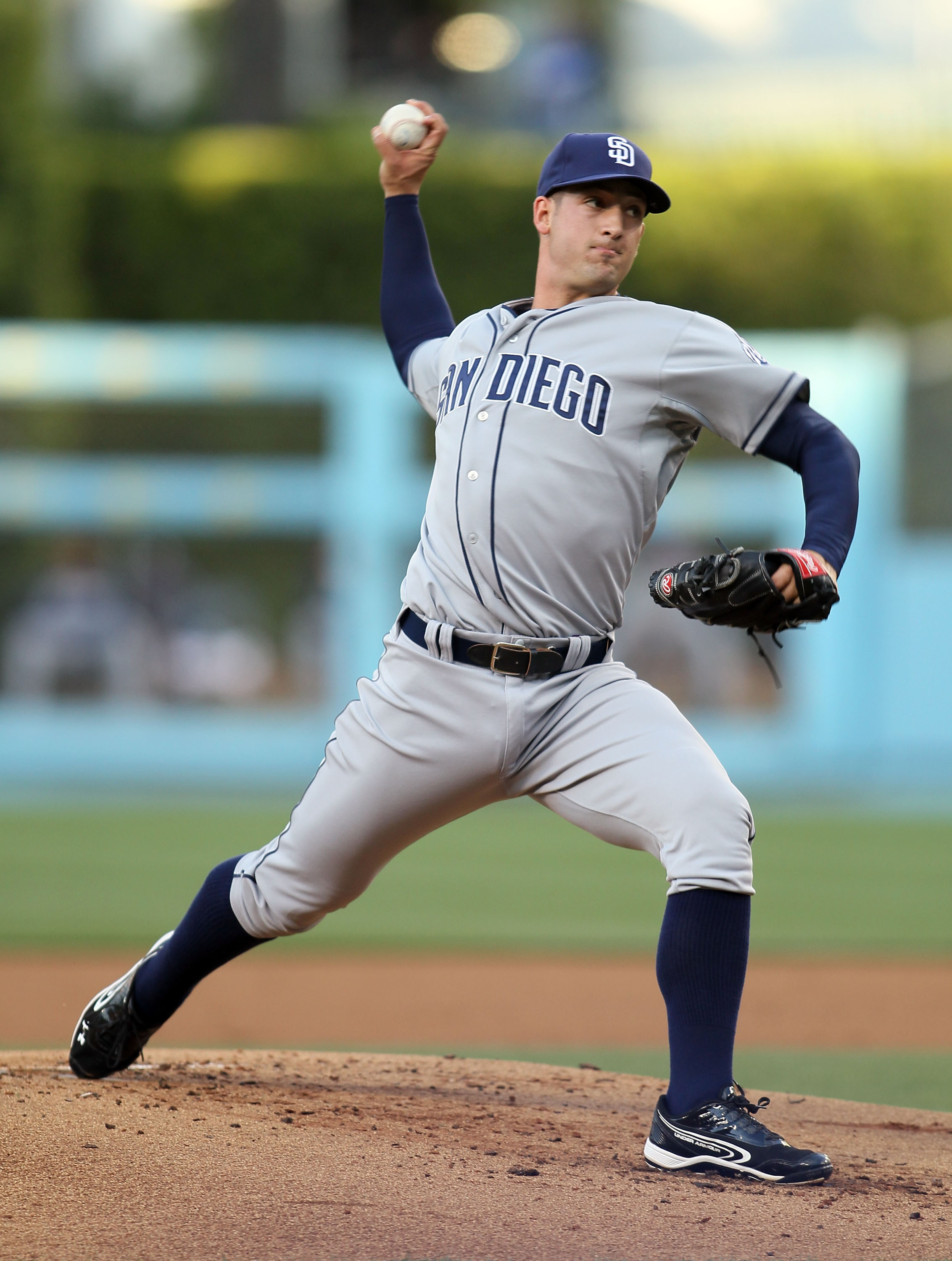 Wieland’s walk rate was up in San Diego last year, but that could largely be attributed to rust and limited sample size. He will have to be careful not to get too fine and try to nibble the corners when he’s getting hit. Wieland hasn’t shown a proclivity for ground balls or flyballs in the minors, but he doesn’t have the stuff to consistently keep the ball on the ground, and has been primarily a flyball guy at the big league level (again, small sample).

Health is a critical factor to Wieland’s longevity as well. He’s already had one Tommy John and took longer than normal getting back to the mound. There’s even a report from Jeff Passan that the Padres feared he might have required a second surgery last spring, though a "clean" MRI ultimately showed no new UCL tear. Nothing in his delivery stands out as problematic, and he obviously passed physical inspection by Dodgers’ doctors before coming over in trade.

Wieland is ready to contribute to some team’s back of the rotation, and given his major league experience, he’s likely first in line to fill a hole for the Dodgers. Best case scenario is that Wieland pitches to league average across his starts, but it’s hard to project long term durability given his health track record. There’s a small chance that Wieland could at some point move to the bullpen to provide cover across the sixth and seventh innings. Perhaps shorter outings could push his fastball up more consistently to 93-94 mph, giving him a poor man’s Matt Belisle profile. More likely, Wieland will take his turns in the Oklahoma City rotation and spend the most time of any Dodgers farmhand taxiing to and from the major league roster as injuries crop up in the rotation.

Editor's note: Wieland was acquired after we started these prospect profiles. Erisbel Arruebarrena, previously No. 20, is now the 21st-ranked Dodgers prospect for 2015.

Also, even though Wieland has two years, 161 days of major league service time he is still a rookie. Baseball rules require either 50 innings pitched (Wieland has 39) or 45 days of service time (not counting September, when roster limits expand, or time on the disabled list). Wieland only accumulated 27 such days on the active roster, from April 14 to May 10, 2012 before landing on the disabled list for the elbow injury that ultimately required Tommy John surgery.