The rarity of switch-hitting Dodgers catchers

Only eight men have looked at home plate from behind the plate and from both batters boxes while donning the Los Angeles Dodgers uniform; Yasmani Grandal looks to be the ninth and most prolific.

Share All sharing options for: The rarity of switch-hitting Dodgers catchers

When the Dodgers traded the well-established Matt Kemp to San Diego this past December, the main attraction in the return package was Yasmani Grandal, a young (turned 26 this past November) catcher with a strong pitch-framing reputation and some pop in the bat (24 round-trippers in 777 career plate appearances while playing home games in a park that strongly suppresses homers), who just so happens to bring the switch-hitting advantage to the plate as a batter.

While 17 different switch hitters caught at least one major-league game in 2014, the Los Angeles Dodgers have a very light history when it comes to men who bat both ways and don the tools of ignorance. (Insert your favorite Carlos Santana crack here.)

If Grandal completes two full seasons at Chavez Ravine he will likely have accumulated the most plate appearances for a switch-hitting catcher in L.A. Dodger blue, topping a short list.

There are only eight men who have caught a game for the Dodgers in Los Angeles who were also switch-hitters, and they played in only 12 of the 57 seasons (21%) that the franchise has been in California1. Let's take a look at this select group.

The 2011 Dodgers carried two switch-hitting catchers on their roster, although both were never active at the same time.

Hector ("The Vector") Gimenez somewhat surprisingly made the Opening Day roster that season and managed to split his seven April plate appearances nearly equally, making four from the left side and three from the right, before spending the rest of his Dodgers career on the disabled list or in the minors.

The other switch-hitter that year was Dioner Navarro, who was activated in late April and lasted until the end of August when he and the Dodgers parted ways like a rock band, due to "philosophical differences", ending his second stint in Los Angeles. But when the alignment of attitudes was sufficiently close, Navarro did manage to crack a key "splashdown" home run in San Francisco against Tim Lincecum, supporting a start and a win by Clayton Kershaw in a 1-0 ballgame.

That was not Navarro's first go-round in LA, having spent parts of the 2005 and 2006 campaigns with the Dodgers as well. Overall, Navarro totaled up about a full season's worth of playing time with the Dodgers, 139 games and 487 plate appearances, which makes him the third-most prolific backstop on this list.

One of Navarro's 2005 teammates was fellow ambidextrous hitter Mike Rose, who split time catching in Triple-A Las Vegas and Los Angeles, scraping up 46 PA across 15 games with the big club, which would have been his only year in the Dodgers organization had he not finished up his minor-league career in 2009 mostly with Double-A Chattanooga.

Los Angeles managed to go its first 11 seasons without a switch-hitting catcher, but in 1969 Bob Stinson made his major-league debut for the Dodgers. Stinson, whose given name was actually Gorrell, was a 1966 first-round pick for the Dodgers, but appeared in only eight games over two seasons, making 13 trips to the batters box, before being packaged with former Rookie of the Year Ted Sizemore in a trade to St. Louis for Dick (AKA Richie) Allen.2

Bill Sudakis actually debuted before Stinson but he had ascended the ranks in the minors as an infielder and came up to the Dodgers as a third baseman. "Suds" or "Sudsy" burst into the majors with a hot, switch-hitting bat, hitting .276/.382/.471/.854, 165 OPS+ while playing full-time in September of a very offensively challenged 1968 season. That bat made young, impressionable Dodger fans think they might have a star on their hands.

But 1969 proved more challenging and Sudakis, the regular third baseman, finished the season hitting only .234/.294/.383/.678, 95 OPS+. In retrospect, maybe a near league-average bat at a position the Dodgers had struggled mightily to fill for years wasn't so bad, but a .234 batting average was still a .234 batting average, and LA had a young hot-corner prospect named Steve Garvey tearing up the minors, so management made the decision to convert Sudsy to a catcher.

In the end, Sudakis caught in 57 games for the Dodgers in the first two years of the 1970s before being waived near the end of spring training in 1972. And Garvey became a first baseman anyway.

In acquiring Hundley twice in off-season deals, the Dodgers ended up trading away Roger Cedeno, Charles Johnson, Mark Grudzielanek and Eric Karros to obtain him3. Curiously, Charles Johnson is Hundley's top career similarity score match according to Baseball-Reference, and his top match at each age from 27 to 33.

One imagines that Kreuter may have used both hands to recover his stolen Dodgers cap from a fan in the stands in Wrigley Field, which resulted in an infamous melee in May of 2000.

Finally there is Dorsey High School's own Derrel Thomas. The switch-hitting utility man spent most of career in the middle infield, or in center field making basket catches, but in April 1980 he was pressed into duty behind the plate for five consecutive games, including three starts. 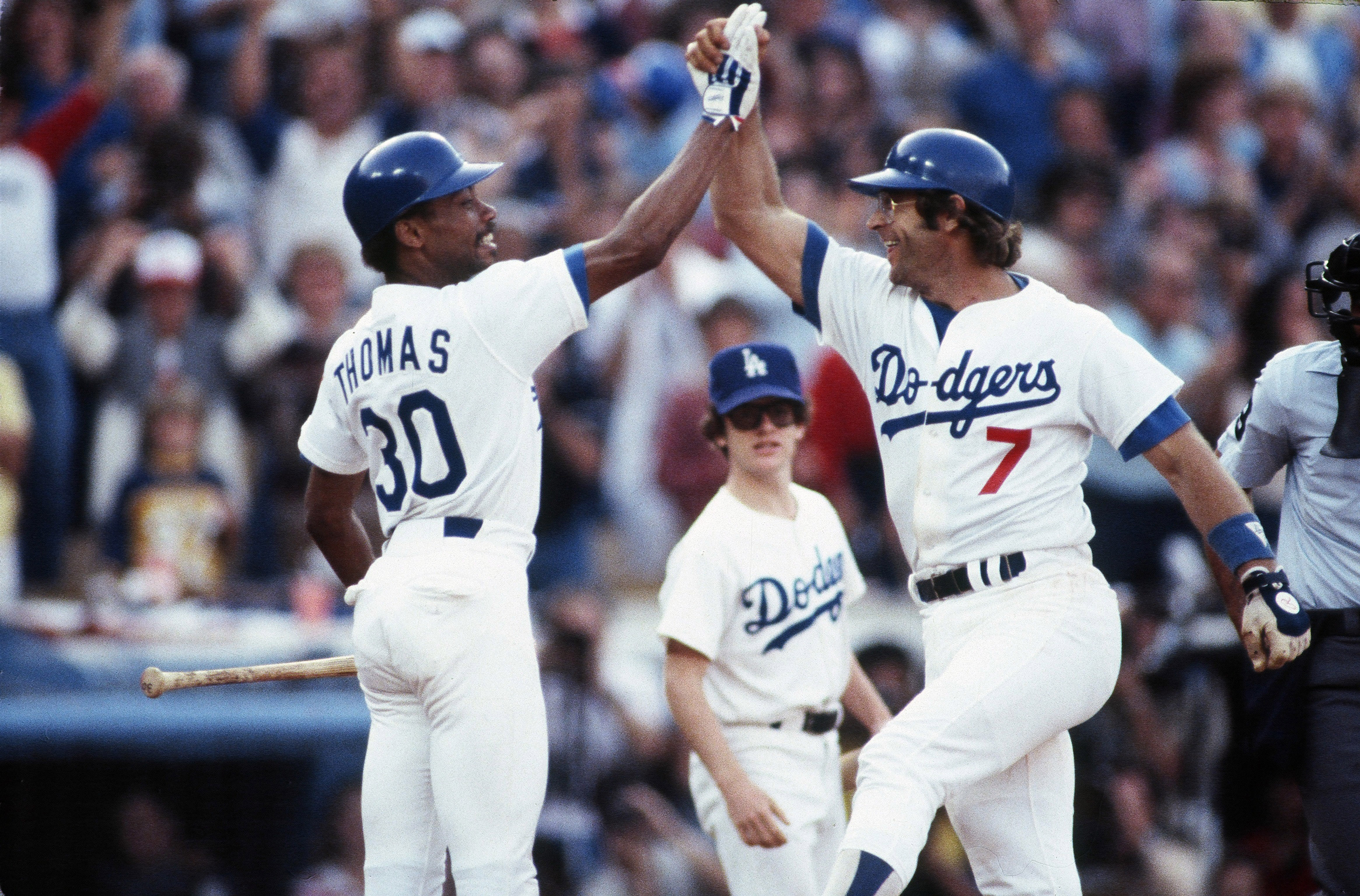 Steve Yeager, the Opening Day catcher, had a minor injury that took him out of the third game of the season, but he was still on the active roster. Backup Joe Ferguson then left the sixth game with an injury that put him on the disabled list for a month, leading to Thomas, the emergency catcher, making his first appearance behind the plate. Finally, the Dodgers decided they need a conventional catcher and called up Mike Scioscia to make his major-league debut after Thomas's stint as a backstop. Thomas even collected six hits and one home run (batting left-handed) in 15 plate appearances during that stretch.

If Grandal doesn't end up on the top of the list, and within two-to-three seasons, the Dodgers probably "lost" the trade.

2. Stinson with the Cardinals was the second switch-hitting catcher on the roster, along with 21-year old Ted Simmons.↩

3. Sure, sure, sure, the Dodgers also got Arnie Gooch and Chad Hermansen in those transactions. Big whoop.↩