Most intriguing Dodgers prospects for 2015

Share All sharing options for: Most intriguing Dodgers prospects for 2015

The top 20 Dodgers prospect countdown for the 2014-15 off-season may be over, but the look ahead to the 2015-16 list is just beginning. Today we look at the most intriguing players not included on the Top 20 countdown that lacked the depth of info to rank, but nonetheless still could factor in to the Dodgers’ plans, possibly in a big way, down the road. With a decent amount of prospects in the current Top 20 on the doorstep to the majors or close to exhausting eligibility, the "most intriguing" players have a decent shot at filling their places with seasons that display their potential:

We covered Leon a bit in the countdown primer article, but the catcher has a chance to put himself on the map with a strong debut in full season ball. If you search Leon on YouTube, you’ll find a collection of home run videos from the friendly offensive environments of Pioneer League parks. That shouldn’t necessarily diminish Leon’s power potential, nor dampen his star as a prospect, but without it’s hard to make a prospect profile when you only get to see the six best swings of Leon’s 2014 season.

What the video does show is a 19-year-old flashing power to all fields. Leon is stockily built but hasn’t quite started to add mature bulk yet, suggesting he should have solid average power or better in the future. His swing appears longish, but he’s strong enough to power through mishits. We only know what we’ve read from prospect analysts on his defense, with reports seemingly mixed but at 19 and no games above short season, Leon has plenty of time to develop. If he can’t stick behind the plate, the bat becomes even more important to his future outlook, with likely only first base as an alternative if he continues to fill out. Leon is probably one of the top twenty players in the system right now, but I feel comfortable waiting to rank him until we see how he performs with Great Lakes.

Combing through the list of 2014 draftees while putting together the initial top 20 list, Uter had the most unique background after the top draftees and I was hoping to find video to evaluate him. Thanks to FanGraphs, we now have video as of last week. You won’t find much in the :27 second video beyond a teenager struggling to find his release point, but you can see teases of the size and athleticism he offers. Uter’s 6’4, 205-pound frame oozes potential, and judging by the countless football prospect videos (he was a Wake Forest wide receiver commit) he’s a fluid athlete that just needs some baseball specific fine tuning.

Uter reached the low 90s in high school, and right now it’s hard to peg his ceiling, or floor for that matter. He’s raw enough that he’ll likely be held back in extended Spring Training before heading to Ogden this season, and may be a year or two away from making a name for himself in national circles, but Uter would be the least surprising name to hear is suddenly throwing an easy 97 mph fastball. Alternatively, he could bounce around short season a few years never figuring it out. He’s a lottery ticket with a big potential payout.

Walker checks off several boxes on athleticism and tools that would make him a personal favorite of mine, and it’s hard for me to leave him out of the Top 20 for that reason alone. Still, the gap between potential and present value are large enough to wait on pro level production before getting too excited about him as a prospect. Each video clip on his Perfect Game profile page shows a little promise and a little rawness you might expect from a high school pick outside the upper tier. Walker is a very solid overall athlete, with excellent fluidity and looseness in his lower body, some stiffness in his arms, but good overall mobility and agility. His frame is excellent and can handle easy bulk. He’s a high school shortstop that has slid to third and may ultimately have to play outfield. Mechanically, he looks the best in the outfield, but it’s worth keeping him at third until he proves he cannot play the position. As described, Walker moves well around the infield and should have range, but his hands aren’t great and his throwing motion across the diamond needs fine tuning. He made 20 errors in 35 games at the position in Rookie League. Walker has a naturally lofted swing from the left side that looks a little grooved at times but he is athletic enough to make adjustments. His pro debut showed his rawness, and Walker is likely to head with Uter to Ogden this season. 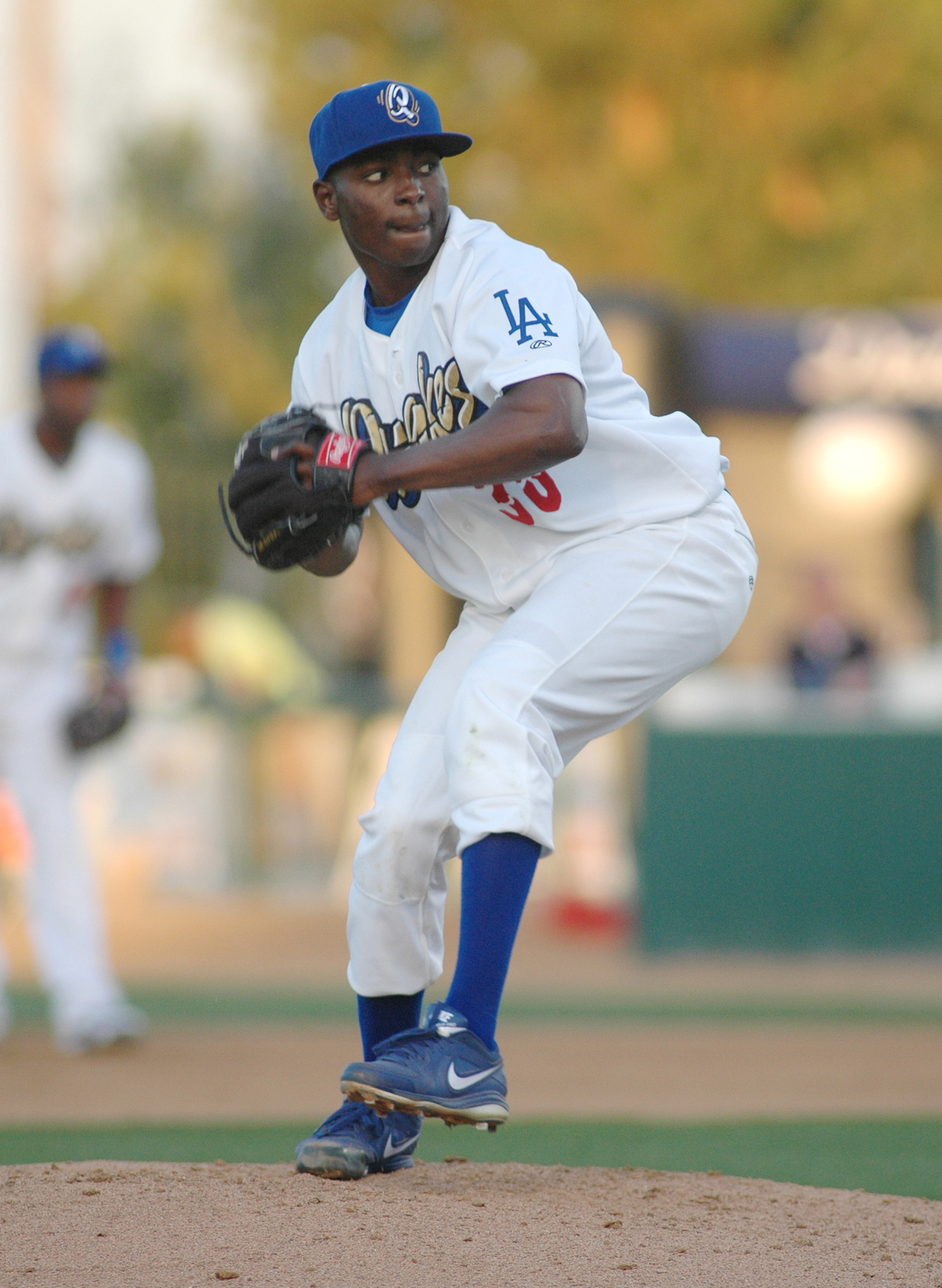 Jharel Cotton was second on the Quakes with 138 strikeouts in 2014 (Photo: Steve Saenz | Rancho Cucamonga)

You may have started to think that "intriguing" simply meant "hasn’t played A ball yet," so Cotton is here to poke a hole in that theory. Despite pitching at three levels in 2013, Cotton has essentially moved up a level a year, and will be an appropriately aged 23-year-old at Double-A this season. Cotton doesn’t have near as much to work on as the names listed above, but instead must continue to prove himself. Cotton posted big strikeout numbers in the California League, but having an above average change-up in either A level is generally a recipe for success at the A levels.

Now the task becomes getting polished hitters out, and for that he’ll need more than one above average pitch. Fastball reports are all over the map on Cotton, but what little I’ve seen suggest the pitch is fairly straight-ish. The curveball is a bigger bender and as an undersized right hander, he will have to avoid leaving the pitch flat. One of two things can happen for Cotton to kick his prospect status into gear: He still racks up strikeouts at the Double-A level while avoiding hard contact to become a back of the rotation option, or he gets moved to the pen, allowing his pitches to play up in middle relief. While neither profile sounds exciting, be reminded that Cotton is a 20th round, undersized, collegiate prospect. If he becomes a potential major league piece that’s not just intriguing, that’s story book material.

I put Rhame here based strictly on his numbers from last year, and my general idea of his stuff. There’s just not enough video available to evaluate him myself, so failing that this year, he still won’t make next year’s countdown. That being said, Rhame’s a pretty good relief prospect on paper.

I’ll direct you toward Baseball America’s draft database or FanGraphs’ scouting reports for more detail on his stuff, but it’s obvious from the numbers that Rhame throws quality strikes. He was almost impossible to square up last year, with a line drive rate around 10%, and over 12 strikeouts per nine innings. He may never wind up an elite relief prospect, but he could be a year or two from knocking on the big league door, making him worth of a future ranking between 11-20 on the Prospect List. It would not surprise me to see Rhame skip the California League and start the year in the Tulsa bullpen, A-ball hitters may not represent enough of a challenge for him to further his development.