Sorting out the Dodgers bench

Share All sharing options for: Sorting out the Dodgers bench

SURPRISE, Ariz. -- On Monday we looked at the Dodgers bullpen and the competition for several open spots. Today, we look at the bench, which has fewer spots but still has the same spirit of competition.

The Dodgers made quite the overhaul in the offseason, with 19 new players on the 40-man roster added since the end of 2014. One of the main goals of the new front office was clearly stated.

"We did everything we could to mold our roster into a highly-functioning baseball team as opposed to a collection of talent," Dodgers president of baseball operations Andrew Friedman said in December.

That meant not only adding talent — the Dodgers have 10 position players who, if given enough playing time, are projected to produce at least two wins above replacement in 2015, more than any other team in Dan Szymborski's ZiPS projections — but also by having players who fit a particular role.

Here is my view of the race for bench spots as we stand 20 days before opening day.

Before the bench can be sorted out, there is the matter of figuring out who the everyday center fielder is. We all know the dangers of assuming, and I certainly don't want to make an ass out of either you or me, but for today's purposes I am penciling in Joc Pederson as the starting center fielder. He's the long-term solution there anyway and has to date done everything in his power to win the job.

If Pederson doesn't win the center field job, he'll start in Triple-A Oklahoma City, which opens up another bench spot, and we can adjust accordingly. But here is the bench with Pederson in center:

Turner is coming off one of the best seasons ever by a Dodgers reserve, and came into camp in even better shape this season.

"He's great off the bench, he's great if you play him. In this league, you need more than one of those. He gives you a chance to give multiple guys days off, and it gets him a chance to be in the lineup at multiple positions," manager Don Mattingly said. "He's a great teammate. He's been great in our clubhouse. It's tough for a guy that's playing part time to be a leader, but he's been a guy who is a good example for our guys."

It's not clear exactly what the playing time split will be between Yasmani Grandal and Ellis behind the plate, but it's hard to believe the Dodgers traded Matt Kemp and $32 million for the primary return to be a backup catcher. Ellis in more of a part-time role gives the Dodgers an immediate upgrade over any of his backups in the last three seasons, on both sides of the ball.

Though tempting as it is to include Scott Van Slyke in the "lock" section, the fact is he does have one option year remaining, and you never know how he might be viewed through the lens of a new front office.

Not to say that both Ethier and Guerrero wouldn't be effective off the bench, but the Dodgers' ideal bench likely wouldn't include either one, but both contracts may force the team's hand.

Ethier has made clear his preference to start, and in the increasing likelihood that opportunity won't come in Los Angelesthe best option is to probably deal him elsewhere.

In a perfect world the Dodgers would be able to trade Ethier to someplace he would start, but per a report from Jon Heyman of CBS Sports on March 4 the Dodgers found no takers on Ethier even when offering to pay half of his $56 million and three years guaranteed.

The correlation between Guerrero's contract and his roster spot is much clearer. The club can't send Guerrero to the minors without his consent. Guerrero has $14 million and three years left on his deal, but can also become free agent at the end of any year in which he is traded, further complicating matters.

By all accounts Guerrero has looked more relaxed in his second year, and could be an asset if only because of his bat, but his primary positions played (second base, third base) are the same as Justin Turner, making for some redundancy there. Guerrero has mixed in time in left field this spring, trying to add some utility.

The almost-lock hit .297/.386/.524 in 98 games in 2014. Barring a true surprise, he will be on the bench again, platooning with Carl Crawford in left field and backing up Adrian Gonzalez at first base. 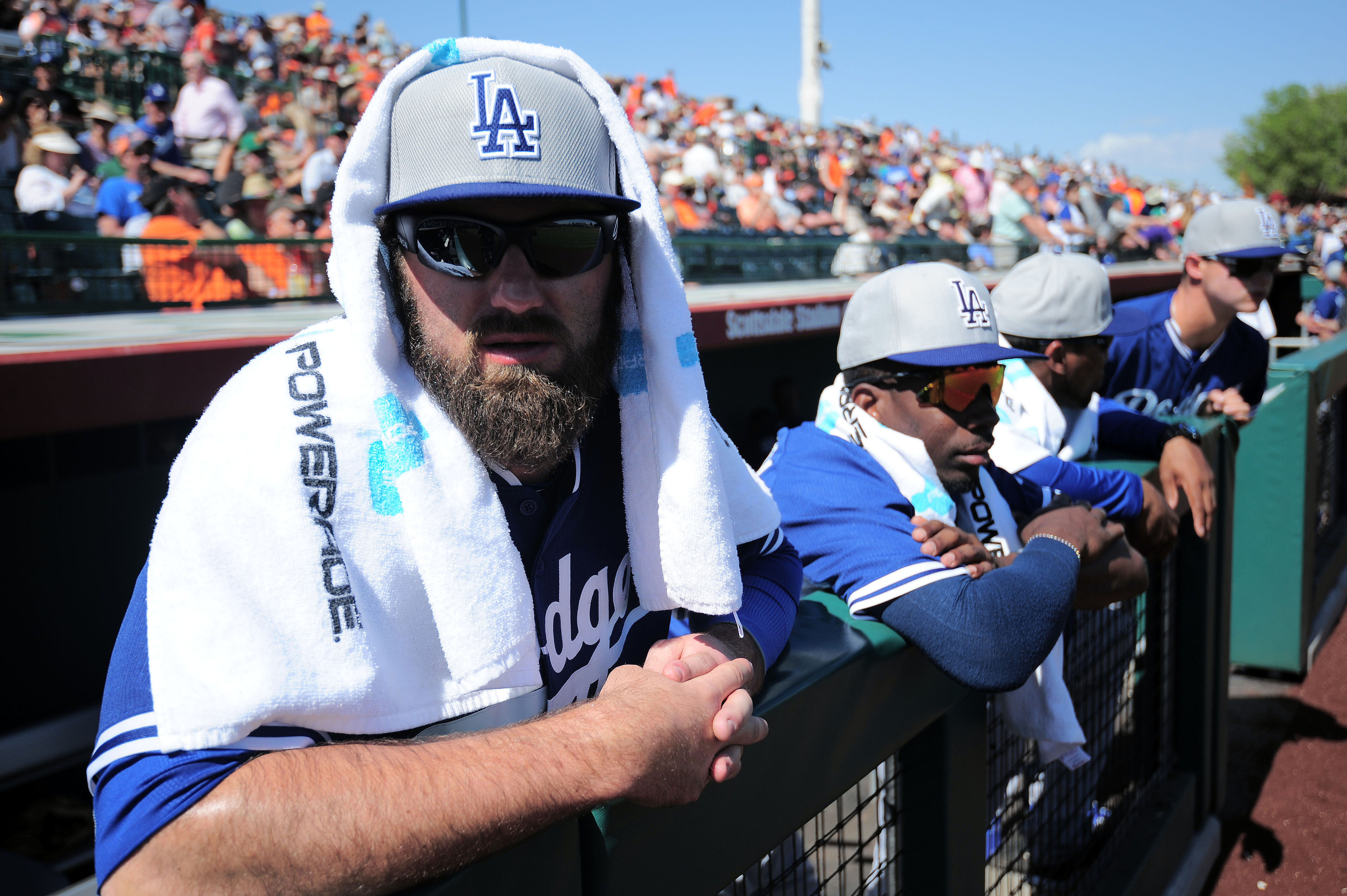 Heisey is nearly a perfect fifth outfielder, above average defensively at all three positions plus some power off the bench. There is also a willingness to accept the part-time role that makes him ideal for it.

"Just being able to contribute. Part of it was realizing that you can still affect the game coming off the bench," Heisey said. "Maybe not on an everyday basis you don't have a chance to affect the game, but a lot of times when you do get in there it is in big spots."

Barney is great defensively at second base, and has shown the ability to play shortstop, the position he was drafted at and started at in the minors.

The key, especially for purposes of the opening day roster, is that both Heisey and Barney have options and can be sent to the minors. With four years, 157 days of service time, Heisey is 15 days shy of the five years service time required to give him the power to refuse any assignment to the minors.

With Barney, the question really depends on how much the team truly needs a backup shortstop. Jimmy Rollins is not likely to be pinch hit for very often, and he is good enough on defense that there is no need for a defensive replacement late when leading. This is not a Hanley Ramirez situation.

Rollins played 131 games at shortstop in 2014, and completed 129 of them. If he is down for a longer period of time, the club could easily make a roster move, bringing up Barney from the minors, for instance to cover at shortstop, and in the meantime could make do with Turner as the occasional backup at the position for a game here and there.

Hernandez, 23, is by far the youngest of the group and is the most likely to be optioned, but in his brief time in the majors last year (134 plate appearances) he was an above-average hitter, hitting .248/.321/.421, a 107 OPS+ in 42 games. Hernandez also played games in 2014 at second base, shortstop, third base, left field, center field and right field.

He has played those three infield spots and center field this spring.

"In the National League you always need a couple. He's a little bit different than your normal utility guy because he can play the outfield," Mattingly said. "Enrique can hit. The only reason these guys get to play all over the diamond is because they can hit. If they can't hit at all, we're not seeing them."

The new front office has done a good job of upgrading the Dodgers depth, and most of that depth is flexible and interchangeable if need be. But for terms of selecting the opening day roster, it's hard to ignore the two inflexible parts. While Ethier and/or Guerrero might both eventually get moved, I think the Dodgers keep them around for a while to see if it can work out. So both are on my guess of the opening day bench:

With plenty of help waiting in the wings.