GLENDALE, Ariz. -- As we sit 11 days before opening day, there are still 14 relief pitchers in Dodgers camp fighting for seven bullpen spots.

Those 14 pitchers don't include Kenley Jansen nor Brandon League, both of whom will begin the season on the disabled list. That leaves us with several pitchers fighting for very few spots.

"I've never been in camp with so many veteran guys going for so few jobs," non-roster invitee David Aardsma said last week. "At the same time, I like being around competition. It brings the best out of myself when guys are pitching well and I have to beat them."

With Jansen ($7.425 million) and League ($7.5 million) on the shelf, the only three relatively high-priced contracts left in the pen include those of J.P. Howell ($4 million) and Joel Peralta ($2.5 million), really the only true locks for opening day roster spots. Juan Nicasio also has a $2.3 million salary but its not guaranteed; he could theoretically be released for the cost of 45 days termination pay, or $565,574.

The normal impulse to give a spot to a roster spot to a veteran over a younger player with options isn't as prevalent here. Of the five non-roster invitees in the bullpen, none have opt-out clauses to their minor league contracts before May 1. Which gives us more of a true competition, knowing that nearly everyone can be kept as depth if they don't make it.

There are a few exceptions of course, with Nicasio, Chris Hatcher and Dustin McGowan all out of options, meaning if they don't make the team they would need to be designated for assignment and exposed to waivers, with the risk of losing them.

I made a handy flowchart of the 14 relief pitchers left in camp to keep track (click to enlarge): 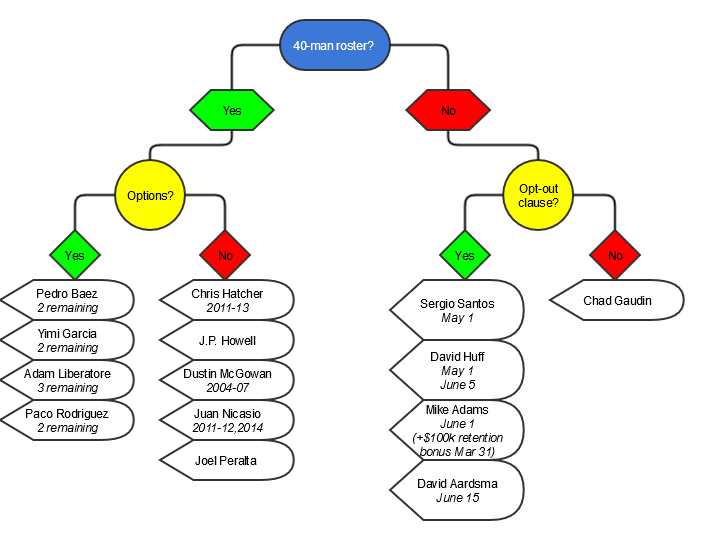 The safest bet, within reason, usually is to bet on the pitchers who can't be sent down, which puts Hatcher, Nicasio and McGowan on solid footing to join Howell and Peralta. Though McGowan is only signed for the minimum salary of $507,500, and non-guaranteed at that, with a roster bonus of $1 million for making the team. If anything, McGowan is a roster invitee.

Ten days ago I analyzed the bullpen battle, and will keep my guess the same today for the opening day seven:

But I do think there are a few close calls, so adding someone like Yimi Garcia or Adam Liberatore wouldn't surprise me at all, especially instead of needing to make another roster move to add Sergio Santos to the 40-man.