The Dodgers had their moments in the first week, but were also inconsistent, and the result was a .500 week, taking two of three from the darling Padres, then dropping two of three in the desert to the Diamondbacks.

Dodger Batter of the Week: First baseman Adrian Gonzalez had the hottest start in baseball, going 14-for-23 (.609) with five home runs and three doubles in the season's opening week, driving in seven runs and scoring eight. On Wednesday, Gonzalez before the game was presented his 2014 Silver Slugger and Gold Glove awards, then hit three home runs to beat the Padres. Gonzalez became the first player in major league history to hit five home runs in his team's first three games of the season.

He hit no home runs in the weekend series in Phoenix, but was still hot in the desert, hitting .400 (4-for-10) with a double and four walks.

Dodger Pitcher of the Week: Zack Greinke allowed only one run in his two starts, striking out 11 with one walk in his 13 innings, improving to 19-1 in his career against the National League West. 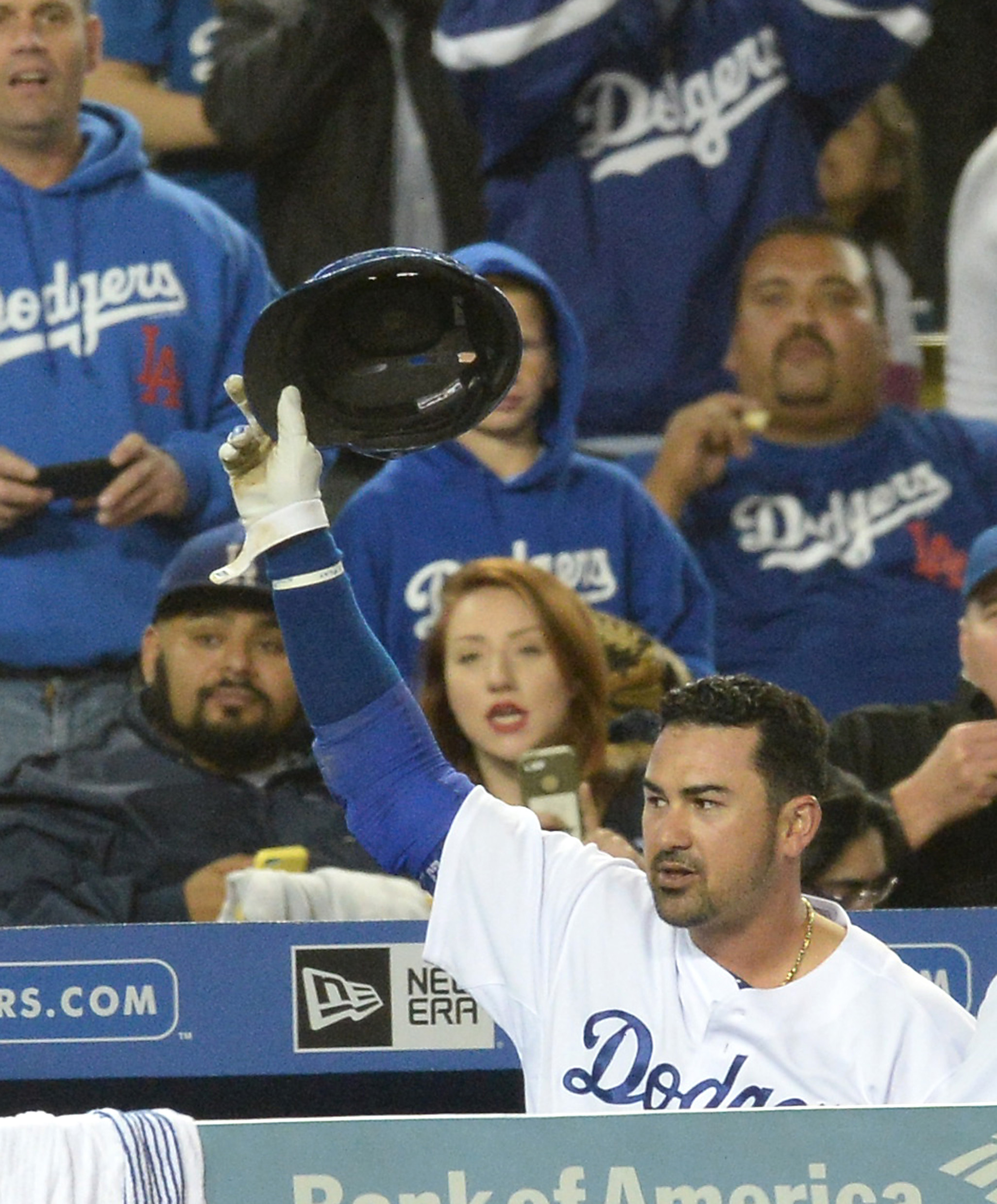 Extra, extra, read all about it: Through six games the Dodgers have 14 doubles, three doubles and 10 home runs. The 27 extra-base hits are their most in franchise history through the first six games of the season, dating back to at least 1914. The previous best was 25 extra-base hits, accomplished in 1948, 1955 and 1977.

Rarity for Rollins: Jimmy Rollins, who was the hero of opening day with a three-run, game-winning home run in the eighth inning and drove in seven runs during the week to tie for the team lead, had four errors in a week for the first time in his career in his first week with the Dodgers. In 2,058 games at shortstop in his over 14 years with the Phillies, Rollins made two errors in a game just four times (May 17, 2005; Sept. 27, 2006; Sept. 10, 2009; Aug. 10, 2010). But he did so twice this week with the Dodgers, making two errors both Tuesday and Sunday.

Walking in LA: In his Dodgers debut on Wednesday, Brandon McCarthy got a piece of a 99-mph fastball from Andrew Cashner, fouling off a full count pitch with the bases loaded. The next pitch was out of the strike zone, giving McCarthy the first RBI by a Dodgers pitcher in 2015. It was the first bases loaded walk by a Dodgers pitcher since 2011, when Hiroki Kuroda's walk against Tim Stauffer on Aug. 30 was the club's third bases-loaded walk by a pitcher that season.

Sunday: The club sent Webb and his $2.75 million salary outright to Triple-A Oklahoma City, and the veteran reliever accepted the assignment.

The Dodgers run the Mike Kingery gauntlet with a homestand against the Mariners and Rockies, plus a Thursday off day mixed in. Wednesday is the 2015 Civil Rights Game and Jackie Robinson Day; the ESPN2 broadcast is a full national broadcast and won't be blacked out in the Los Angeles area.