Share All sharing options for: Player development the main objective at Rancho Cucamonga

When the current Quakes were in Dodgers minor league spring training camp in March, many of the players might have done a double take as they saw their former Loons manager Bill Haselman and pitching coach BIll Simas in new roles. But that familiarity may prove crucial as these players try to continue their advancement up the Dodger system.

Last weekend, I went to three games and saw a team with a deep lineup, promising starters and some nice bullpen arms. Sure, there isn't a Corey Seager or Julio Urias playing there but this team has some names to follow.

Haselman managed 16 players on the current Quakes roster in 2014 when he managed the low Class-A Great Lakes Loons.

"Overall they have matured more," Haselman said, "It looks to me like they've learned a lot throughout the year, instructional league things like that and they are able to apply it more this year."

Watching Haselman on the field as the third base coach, you get a sense that he is always teaching. While winning is certainly a good thing, Haselman has no doubt about what his job is all about.

"I see developing more important. The ultimate goal is to have the Dodgers win," he said. And if we can win by doing that, great.  Everyone in this clubhouse including myself wants to win. But I want to make sure that these guys are ready to go up when they go up because when the Dodgers win, we all win."

One of the players that played for Haselman in 2014 is outfielder Joey Curletta. The 21-year-old outfielder, drafted in the sixth rough in 2012, has gotten off to a good start - hitting .294/.368/.510 with eight doubles and a home run in 12 games through Wednesday - and his manager sees a bright future for him.

"It's just consistent at-bats" Haselman said, "going up there with a good plan and sticking to it. He's going to be a good player, he's strong, and he plays a very good outfield."

In 19-year old Cody Bellinger, the Quakes have a very athletic player who has started this year both at first base and center field.

"Just putting him in a couple different positions for his sake, he's fast, he's athletic. We put him in the outfield because he can play it and he's pretty good at first base," said Haselman, "The more positions you can play, the better off you can be."

Quakes pitching coach Simas also coached at Great Lakes in 2014 and several Quakes pitchers were on that club.

"We don't like to give [bullpen] roles early in the season. In a perfect world for us, we can have the same guy pitch in the fifth inning and the ninth inning in a week," Simas said. "We don't have a closer, just who is ready at that time.  Seems to be working out where we are giving guys multiple innings, and just giving them their rest." 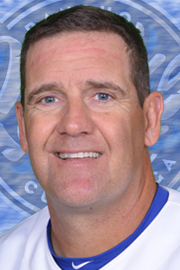 "I see developing more important. The ultimate goal is to have the Dodgers win." -Quakes manager Bill Haselman

Through Wednesday, two different Quakes — Randy Fontanez and Jacob Rhame — have saves, while three other relief pitchers have finished games.

Jose De Leon is the best starting pitching prospect on the team and BIll Simas saw a much different pitcher in August 2014 than he saw earlier that year in Arizona.

"I saw a guy who threw across his body, was a little a bit out of shape," Simas said. "He stayed in extended [spring training] and lost some weight and cleaned up his delivery. It was night and day from what I saw in spring training to the last four or five starts last year."

After a late-season promotion from Ogden to Great Lakes, De Leon put up a 1.19 ERA in four starts, with a dominating 42 strikeouts and just two walks in 22⅔ innings. Currently nursing a mild groin injury, De Leon will return to start for Rancho Cucamonga on Friday night in Lake Elsinore.

Simas wouldn't be surprised if De Leon's stay in Rancho Cucamonga is a short one.

"He kept it up, he has three good pitches and he knows how to use them. His confidence is really high," Simas said. "I can see him as a fast moving guy, he's an older guy so that wouldn't stop him from going anywhere. Just get him some innings and he get them up, we can get him on his way."

A pair of recent draft picks have excelled in the Quakes bullpen, with 2013 sixth-round pick Rhame striking out 10 in five innings while allowing only two hits, and 2014 11th-round pick A.J. Vanegas striking out seven in eight innings with a 2.25 ERA.

"Vanegas has good movement on his fastball, throws good off speed pitches. Rhame's velocity is better, 95 at times. He mixes in sliders as well as the change up," Haselman said "They have the stuff it takes, they have the velocity. Just need some fine tuning going forward."

"A.J. just needs to pitch more. His command needs to get a little bit better with all of his pitches. But he has a nice variety of pitches with the curve ball, change up." Simas said. "We are working to get [Rhame] down in the zone with some angle, learn how to elevate his fastball and also work on his slider."