The Dodgers saw injured stars Hyun-jin Ryu and Yasiel Puig each suffer setbacks in their rehabilitation, and saw Clayton Kershaw give back leads against a pair of mediocre teams, but the team still managed to win four of six games on the road.

After getting outscored 37-31 on the road in their first nine away games of the season, the Dodgers outscored the Brewers and Rockies 39-22 in six games last week.

Dodger Batter of the Week: After ending last week with a walk-off home run, Yasmani Grandal kept his hot streak going. He doubled on Monday and Tuesday, then went nuts on Thursday in Milwaukee with a pair of three-run home runs. He was 4-for-4 with two walks and drove in eight runs. Grandal has a six-game hitting streak, hitting .684 (13-for-19) during that span, with at least three hits in three of his last five starts.

The offense was a four-headed monster last week, with Adrian Gonzalez hitting .450 (9-for-20) with four doubles, a home run and nine RBI; Justin Turner was 5-for-11 (.455) with two home runs, including the pinch-hit game-winner on Sunday; Joc Pederson homered three times and walked nine times, scoring eight runs with a .464 on-base percentage in six games.

Dodger Pitcher of the Week: Zack Greinke on Tuesday pitched into the eighth inning for the longest outing by a Dodgers starter this season, allowing only an unearned run. Honorable mention goes to Pedro Baez, who pitched 3⅓ scoreless innings with four strikeouts, and on Sunday struck out Troy Tulowitzki with the bases loaded in a tie game in the sixth inning. 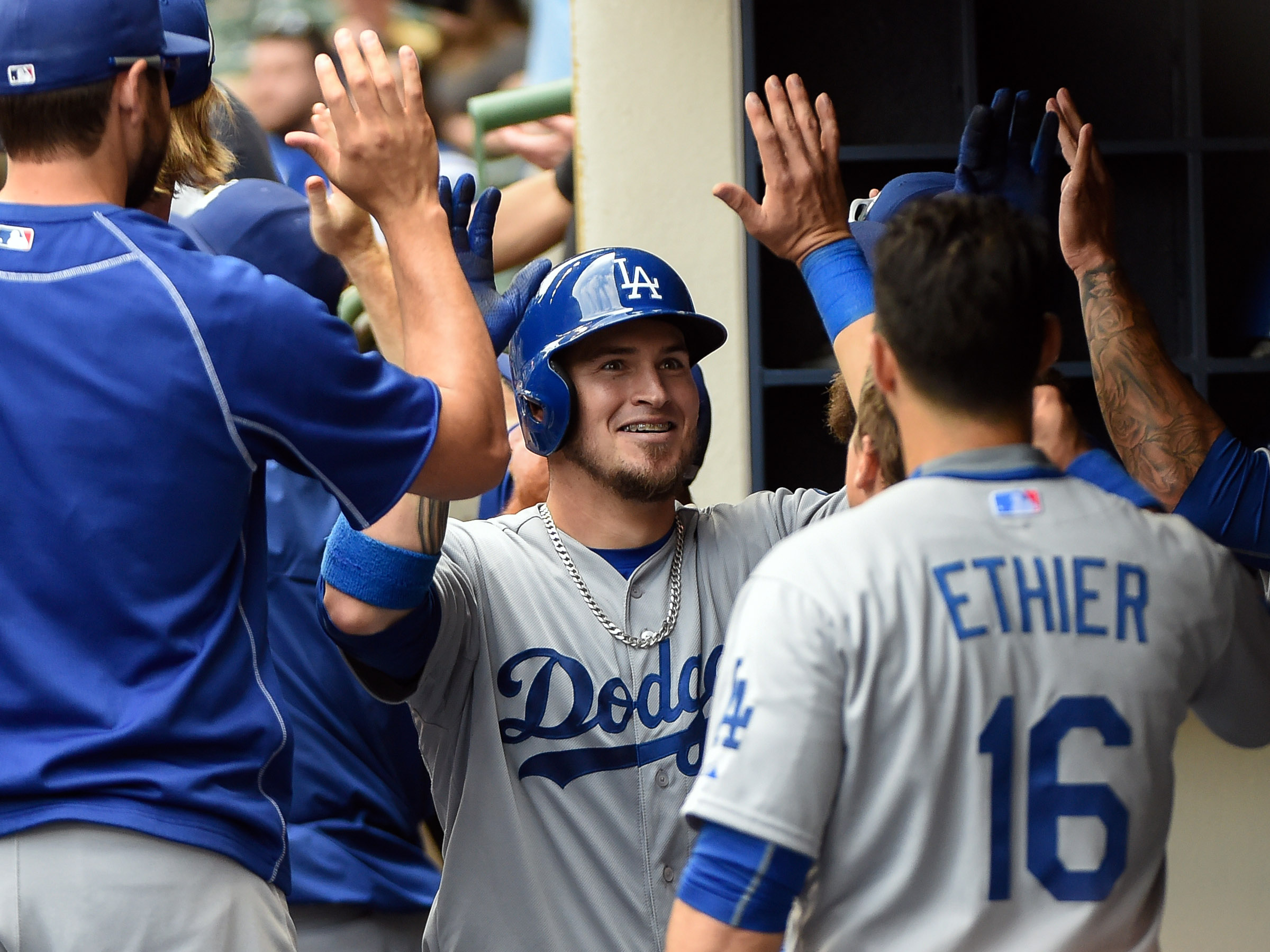 The Dodgers pulled away late and Yasmani Grandal joined a select group of Dodgers with eight RBI in a game. (Photo: Benny Sieu | USA Today Sports).

No need for extras: With his two singles, two walks and two home runs in Milwaukee on Thursday, Yasmani Grandal became just the fifth Dodgers catcher to reach base six times in a game, dating back to 1914. But while Grandal did so in a nine-inning game, the other four — Hank DeBerry (1929), Roy Campanella (1950), Paul Lo Duca (2001) and Russell Martin (2008) — needed extra innings to reach base six times.

Grandal's eight RBI was one shy of the franchise record, and just the fifth time a Dodger drove in at least eight runs in a game since 1914.

Monday: Acquired pitcher Matt West from the Blue Jays for cash considerations and optioned him to Double-A Tulsa; to make room on the 40-man roster, Hyun-jin Ryu was transferred from the 15-day disabled list to the 60-day DL.

The Dodgers run the Preston Wilson gauntlet, returning home for a seven-game homestand against the Marlins and Rockies. Tuesday's starter, who will be called up from Triple-A Oklahoma City, hasn't been announced yet, though it figures to be Mike Bolsnger, so he's penciled in for Tuesday and Sunday (for now). The Rockies optioned Tyler Matzek on Friday after he walked six in just two innings in a start last week; that leaves Colorado with a vacancy in their rotation that will be filled Saturday, likely (per Nick Groke of the Denver Post) by one of Chad Bettis, Chris Rusin, John Lannan or Christian Bergman.