LOS ANGELES -- Carlos Gonzalez hit a three-run home run off Yimi Garcia with two outs in the ninth inning, turning around a Dodgers lead into a 5-4 Rockies win on a rain-soaked Thursday night at Dodger Stadium.

It was the second straight blown save for Garcia, who has been otherwise untouchable this season.

"I thought his stuff was good again," manager Don Mattingly said. "That pitch to CarGo, it's a matter of the wrong spot. If we throw the ball where we want, I think we get him there."

Left-hander J.P. Howell was warming up to start the ninth, but it wasn't to face the left-handed Gonzalez, or lefty Charlie Blackmon before him, who struck out against Garcia.

"If it was just straight trouble right away [with Garcia], then we were going to have to go [to Howell]," Mattingly said. "We felt it was Yimi's inning."

Garcia gave up a pair of singles in the ninth inning, but also struck out two, and had thrown nine of his 10 pitches for strikes in the frame. The Dodgers used Juan Nicasio and Chris Hatcher for eight outs to get to Garcia, and fellow right-hander Sergio Santos pitched in each of the previous two games.

"At that point we were out of righties for the most part," Mattingly said. "We were at that spot where Yimi was our guy."

Garcia allowed a two-run home run to Christian Yelich of the Marlins on Monday in the ninth inning, but the Dodgers came back in the bottom of the inning on a home run by Scott Van Slyke.

They were not so lucky on Thursday, with John Axford retiring three of four batters to earn the save, including a strikeout of Van Slyke to end it.

"[Garcia is] a young guy who has had a lot of success. But now two times out he's gotten hit," Mattingly said. "These guys didn't get here by just having some lack of success and just giving up, not continuing to work. We'll make sure we talk with Yimi, and trust in his ability."

The ninth inning spoiled a strong outing from Brett Anderson, who struck out a season-high eight batters but was shortened by rain for the second straight start.

"It was one of his sharpest games," Mattingly said. "I thought he had a sharper breaking ball. He was able to get the ball in on the righties, and drive it in there. It makes them aware, they have to respect that. Then it opens up the other side of the plate."

On the mound, Anderson entered the game with just 16 strikeouts in his six starts as a Dodger, never more than four in any game. On Thursday, Anderson reached four strikeouts at his 11th batter of the game.

Anderson allowed two runs on five hits in his 5⅓ innings, and his one walk came in the sixth inning when rain combined with a developing blister on his left hand to worsen his grip. Anderson said he didn't expect the blister to affect his next start. 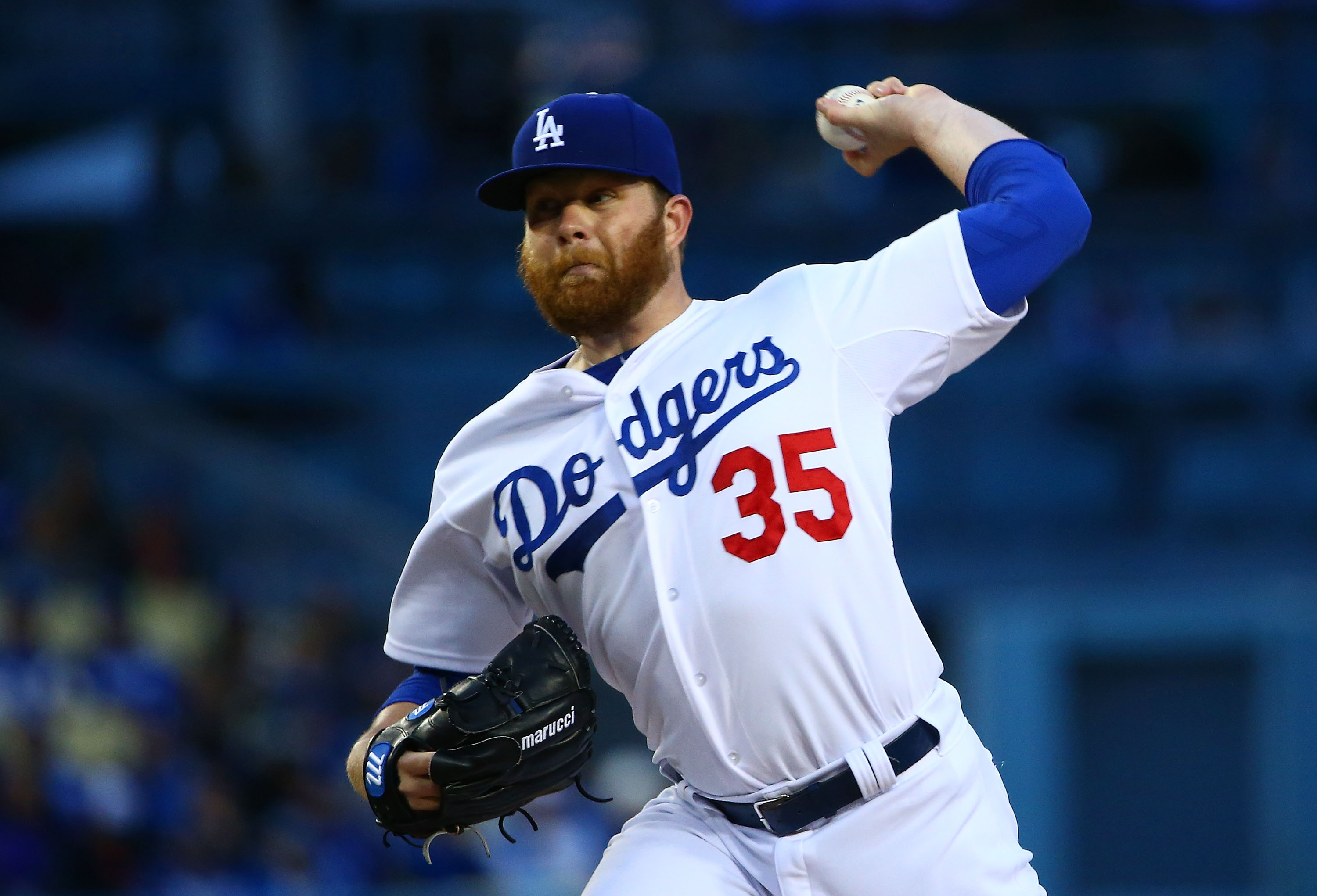 "My breaking ball was the most consistent it has been," Anderson said. "My slider was the best its been all season. I was able to throw it back foot to righties more consistently and get some swings and misses."

At the plate Anderson didn't miss at all, with an RBI double in the third inning and a walk in the fourth inning. Anderson in his career has three hits in 27 at-bats (.111), and all three hits are doubles.

"I closed my eyes and blacked out. I knew I hit it pretty good. I was just trying not to get thrown out at second," Anderson said. "My biggest fear in life is base running at this point. They need the softball re-entry rule for me out there."

His three walks this season match the total of all the other Dodgers pitchers combined.

"I wouldn't expect to be a great on-base percentage guy, but who knows? That just might be my thing," Anderson joked.

In his last start, Anderson pitched five innings in a rain-shortened complete game win over the Rockies. For a little while, it looked like he was headed for the same fate on Thursday night. But after the rain delay, Anderson did not return to complete the sixth inning.

Had the rain continued, Anderson might have done something we haven't seen in 73 seasons.

Adrian Gonzalez drove in the Dodgers' first two runs with a double in the first inning, giving him 998 career RBI. He also walked and scored in the fifth inning, and walked again in the ninth.

His double in the seventh gave him two for the game, and a major-league-leading 17 doubles in the season. Gonzalez is a doubles hitter, averaging 38 doubles per year for the last nine seasons, but this is the most he has ever had through 34 team games (on pace for a tidy 81 doubles this year, which would be a record). His previous best through 34 games was 13 doubles in 2012, a year that saw him end with a career-high 47 doubles. 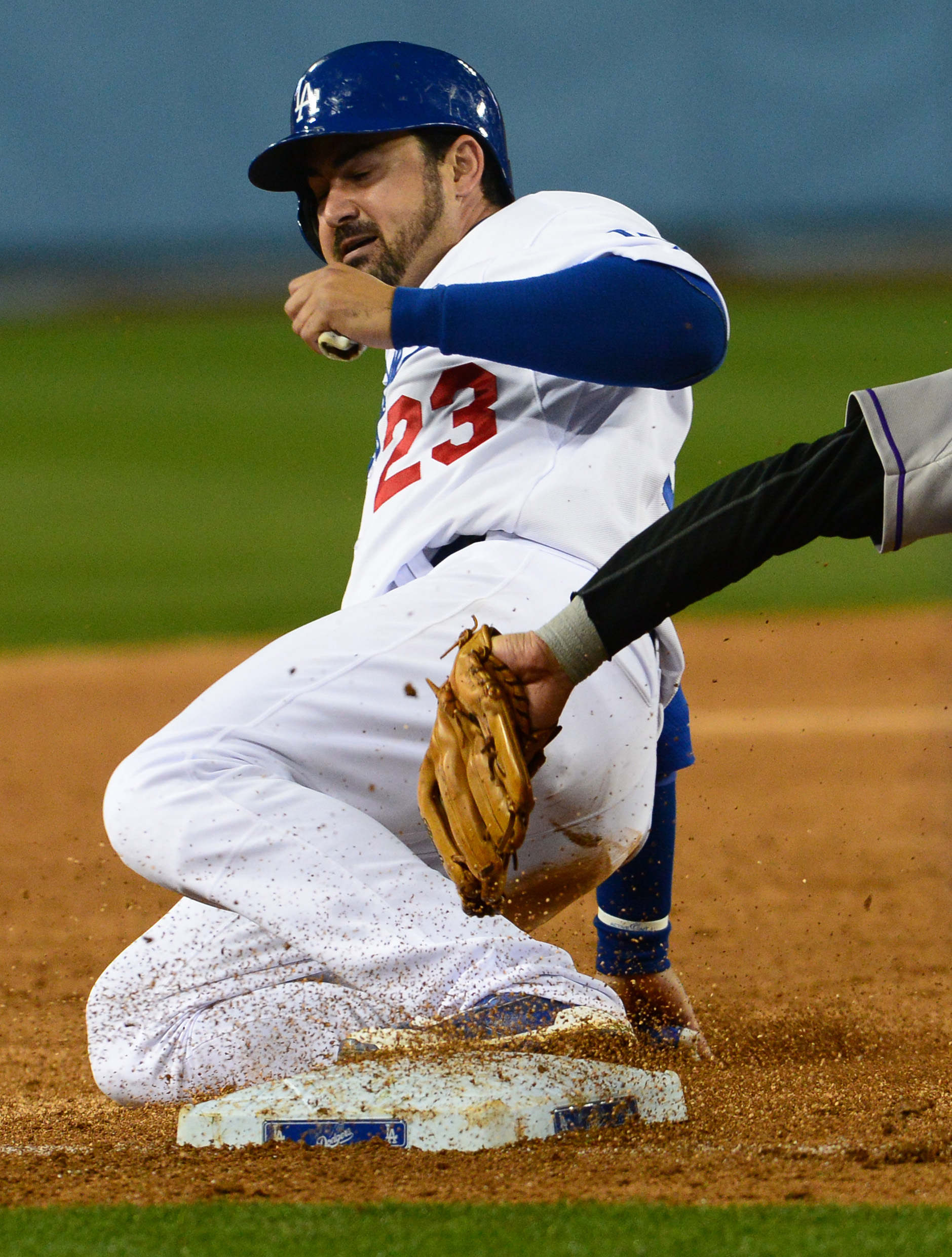 But after that second double, with left-hander Ken Roberts on the mound, Gonzalez tried to steal third base. He nearly made it, too, but was called out by third base umpire Marty Foster, a call upheld by review (the Dodgers have had just two of nine replay challenges overturned this season).

"I think he saw something. I thought he would have had it, but he stumbled just a touch taking off. It surprised me, but Adrian has the freedom and we trust him if he sees something like that," Mattingly said. "It's worth a try. He almost beat it anyway even with stumbling."

It was just the second time in Gonzalez's career he tried to steal third base. The other time, also unsuccessful, was also against the Rockies, at Coors Field on May 31, 2009, with Jason Grilli on the mound and Yorvit Torrealba behind the plate.

The Dodgers will send a fellow named Clayton Kershaw to the hill on Friday night, hopefully in drier conditions. Eddie Butler starts for Colorado. Kenley Jansen could be activated on Friday, though nothing has yet been announced by the team.